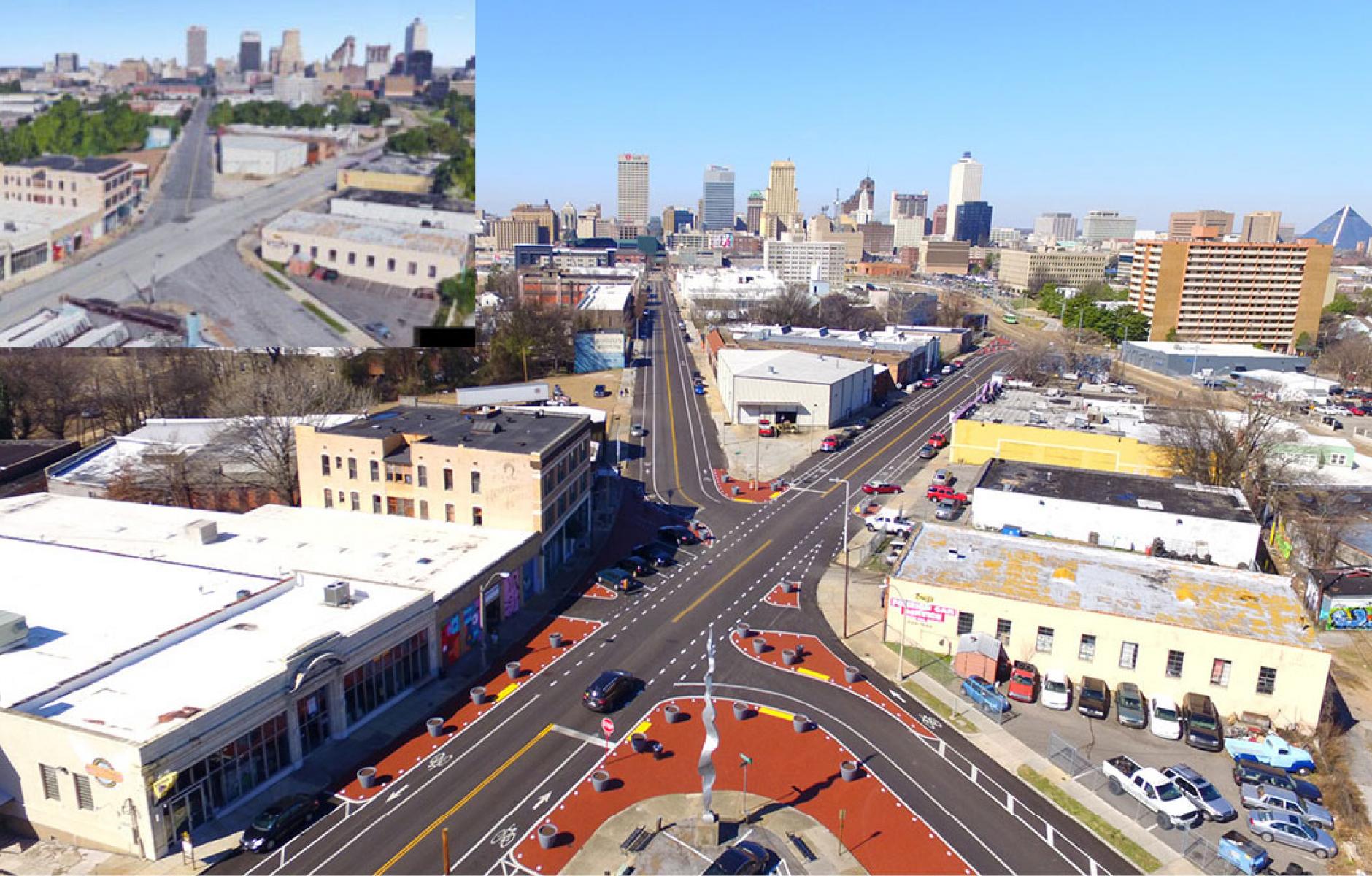 The transformation of the Marshall and Monroe intersection in the Memphis Medical District, with an inset photo of what it looked like before. Source: MMDC, photo by Chris Porter.
Transportation

For about a quarter of typical road diet costs, semi-permanent street transformations have been successfully demonstrated in two cities.
ROBERT STEUTEVILLE   &nbspSEP. 5, 2019

The economic and public safety advantages of walkable streets are manifold, and have been demonstrated time and time again. Yet well-designed thoroughfare transformations are also costly, time-consuming, and require substantial political capital.

CNU wrote case studies on street transformations for the Institute for Transportation Engineers’ Implementing Context-Sensitive Design on Multimodal Thoroughfares. On average, the seven projects cost $5.6 million and took five years to complete. Many of them were controversial prior to implementation and required strong and consistent support from community groups, elected officials, and municipal staff.

Despite the benefits delivered by complete streets, not all municipalities have the resources to pull them off in a timely fashion. That’s why well-designed street transformations are less common than they should be. ITE’s handbook shows how the thinking on streets has changed in recent years, but new designs face substantial hurdles to implement—so many cities are stuck with outdated and sub-optimal thoroughfares.

Tactical Urbanism, which promotes short-term projects to test long-term change, has been around for a decade and is intended to make complete streets easier to pull off, among other goals. Sometimes, that turns out to the be case. Yet even after a tactical intervention whets the appetite for change, the cost and time challenges remain.

Something in between is needed, and that something is emerging in Burlington, Vermont, and Memphis, Tennessee— two cities that are far apart in geography, climate, and context. Burlington calls it “Quick Build.” In Memphis, it’s a “bolt down rather than poured concrete” approach, but the idea is the same: Combine low-cost, flexibility, fast completion, and multiyear durability. Sometimes referred to as “Tactical Urbanism on steroids,” it may be a trick that helps America transform its thoroughfares for the 21st Century.

Burlington adopted its Quick Build system for streets, which is fully explained in a Quick Build Project Materials Guide, in 2017. In just a year and a half after adopting the guide, Burlington completed five streetscape improvements—a rate of implementation that would be very difficult using conventional methods. They cost about a quarter of a full-scale street rebuilding­—and can be implemented much faster. Projects are designed to last up to five years, but they can be adjusted at any time. “We felt this was the logical next step,” says Nicole Losch, a senior planner with the Department of Public Works.

In Memphis, the innovation is taking place in its Medical District, a 2.6 square mile area that is home to eight medical and educational institutions. The nonprofit Memphis Medical District Collaborative (MMDC), in partnership with the city, has completed 13 streetscape improvements in three years.

MMDC first created a “medical district streetscape playbook,” written by Looney Ricks Kiss and Alta Planning + Design, in 2016—which identified 35-50 interventions that would upgrade the streets throughout the district. The Manassas Street project, a three-quarters-of-a-mile-long street transformation, cost $700,000—about half of which the city would have spent anyway for a scheduled repaving. “We figured that if we had done this project with new curbs and typical design it would have cost three to four million dollars,” says Wade Walker, an engineer with Alta. The five-lane arterial was converted to one travel lane in each direction with turn lanes at intersections. Protected bike lanes, on-street parking, curb extensions, crosswalks, and mid-block crossings allow for easier pedestrian access (see video below).

“The traditional approach might be a million-dollar fix for an intersection,” says Tommy Pacello, president of MMDC. “We don’t have that kind of money, so we are looking at the $100,000-$150,000 fix” (with design and engineering, the costs are generally $200,000 or more).

MMDC works with the city’s repaving schedule. The city pays for the repaving and striping, using the Collaborative’s design and engineering (by Alta). MMDC installs and maintains the street furniture, plantings, and other enhancements.

The Memphis projects are designed to last, conservatively, 5-8 years. The semi-permanent redesigns are just as effective as permanent road diets, notes Daniel Ashworth, an urban designer with Alta. “It’s really a tradeoff of longevity for immediate impact.”

Many Memphis streets are wide and overbuilt, like suburban streets—so many streetscape changes are necessary to make an area like the Medical District walkable. The Medical District approach is still considered temporary, because it can be easily changed and adjusted—so it’s easier to get approvals from the city engineering department, Ashworth notes.

Additionally, streets are key stormwater conduits. When you change the curbs, stormwater must be analyzed and permissions are needed from a different engineering office. “The process is streamlined because it does not involve moving curbs, there’s no topographical survey, the drawings are based on GIS aerials,” says Ashworth. “We were able to do that because we are not changing the drainage. So, the drawings and the approvals are quicker.”

This approach was inspired by Tactical Urbanism in 2011 on Memphis's Broad Avenue, formerly a two-wide street, Walker says. Intended to be short-term, the project actually lasted the better part of a decade and recently become permanent with two-way separated bike lanes. After a street redesign is in place for several years, people get used to it and want to make the new configuration permanent, Walker explains.

The Memphis team is learning a great deal about materials. Epoxy gravel was tried, but does not have the longevity of other asphalt coatings like StreetBond and Endurablend. “Traffic armadillos” seem to offer more protection than concrete traffic domes, also known as “silent cops.” Alta is also exploring decorative bollards.

“I think this style of construction will create new markets for new materials,” says Ashworth. One goal is to find practical replacements for large planters, which require steady maintenance. Even though these planters are self-watering, the reservoirs must be filled twice a week in the peak of Memphis’s blistering hot summer, when asphalt temperatures can reach 150 degrees F.

Mike Lydon of Street Plans Collaborative, which wrote Burlington’s Quick Build guide and was involved in Memphis, says that economics was a motivating factor behind the quick build approach. “Both cities don't have a lot of money to be spending on permanent materials from the get-go,” he says. “This is the case in Memphis with a depleted tax base and too much annexation and low-density development, whereas Burlington is just a small city without millions of dollars to spend. Burlington is also a snowy, icy place, so the quick build approach allows for adjustment to winter maintenance policy and methods. Each project can be tweaked the following spring to get the design and maintenance practices right.”

That flexibility could be a big advantage as transportation technology changes in the next decade. Why should street configurations be set in concrete, so to speak, when ride-sharing and automated vehicles—and even technologies like scooters—may radically change the way people use the right-of-way? Quick build allows for streamlined, less-costly changes in curb space, parking, and travel lanes.

Memphis and Burlington have now created models for other cities to adopt, Walker says. “Now that we have some of these on the ground in places like Memphis and Burlington, cities that are considering this don’t have to go through all of the brain damage,” he says. “It could be something akin to what saw with road diets and complete streets—It becomes much easier for a community to consider.” 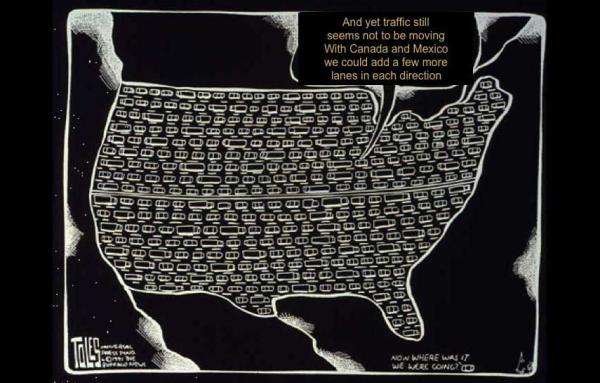 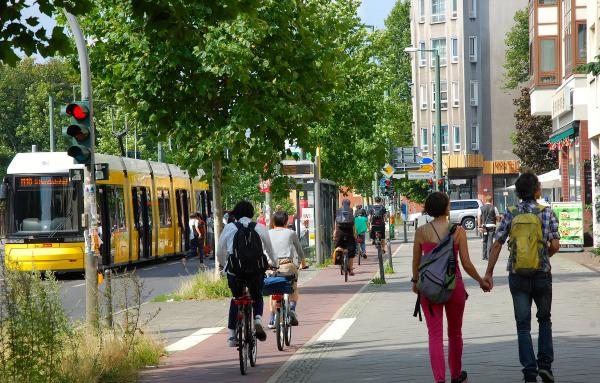 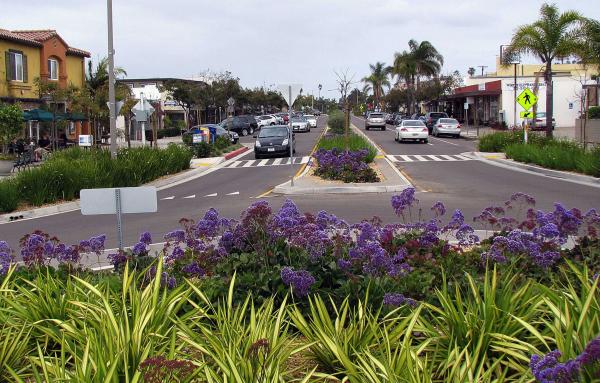