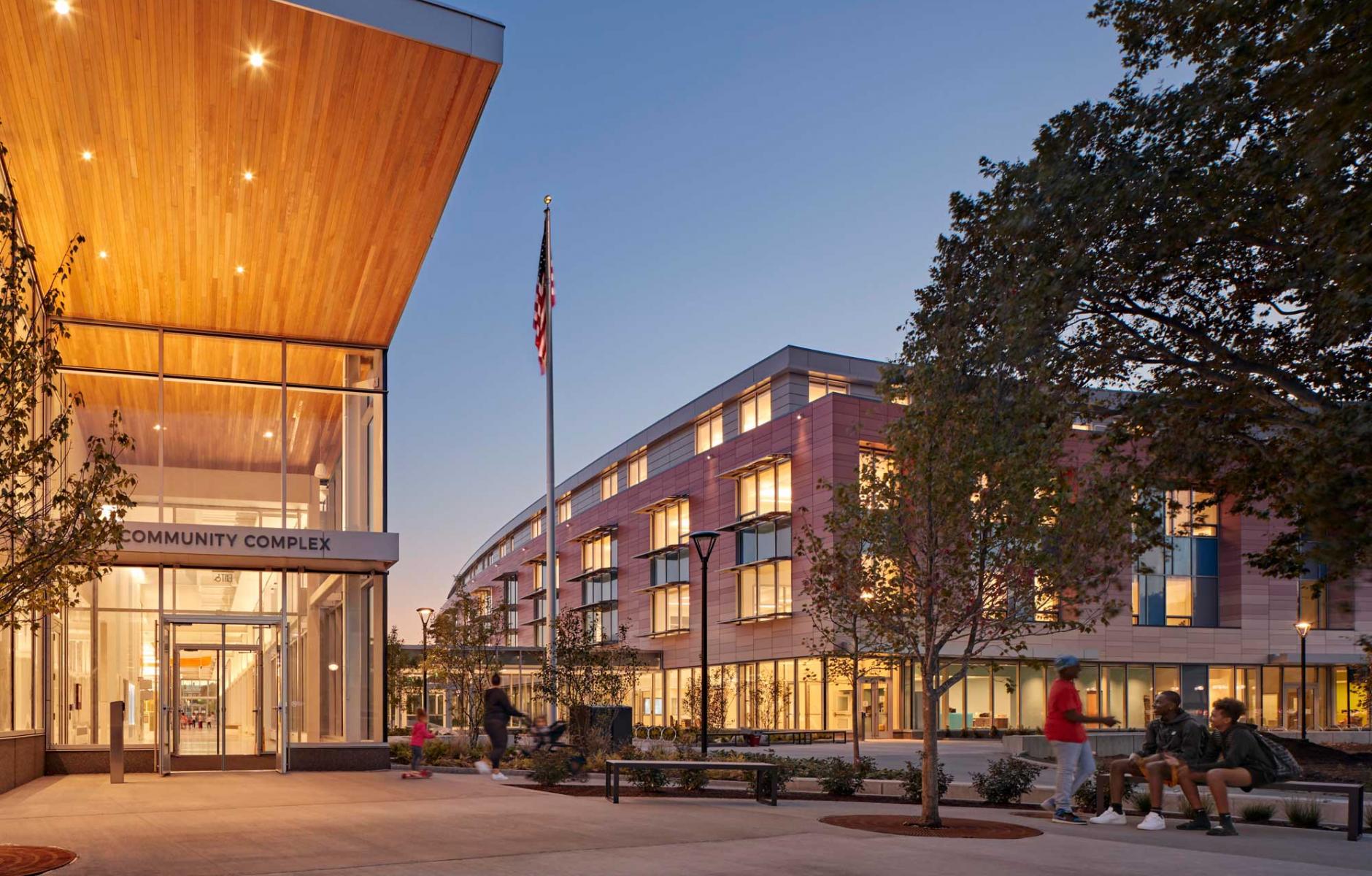 The civic plaza, foreground, and two buildings divided by passageway to park.
Design

The Community Complex on Cambridge Street in Cambridge, Massachusetts, comprises a versatile set of civic uses that serves all ages of residents, throughout the day, seven days a week. The 6-acre complex, with two large buildings, elegantly combines multiple school facilities, a public library, two pools, five playgrounds, a civic plaza, outdoor study areas, basketball and bocce courts, and school administrative offices. The elementary and middle schools’ auditorium, gymnasium, and cafeteria are cleverly combined with the city branch library in a community building that serves public purposes after school hours.

The site planning creates an inviting, semi-circular civic plaza on Cambridge Street, the primary thoroughfare. A pedestrian-oriented green space between the two buildings connects to a large public park, Donnelly field, that was visually severed from the street by the previous layout—a 1961 school and library. On a tight site, the designers found a way to include a great variety of public spaces—13 total—that are much needed in the urban neighborhood. By housing the parking in an underground garage, the team incorporated almost two acres of open space.

The buildings, completed in 2019, are wrapped in green design and covered in solar panels—the first school campus of its kind in Massachusetts.“The physical layout, natural lighting, net zero goal, and easy access to the outdoors all enhance the learning experience,” says Jim Maloney, COO of Cambridge Public School System. “The campus has transformed the streetscape along Cambridge Street highlighting the exterior grounds as a place for passersby to stop and soak up the fresh air and enjoy the beautiful landscaping.”

The two buildings are well balanced architecturally, and the sunlit interiors are complemented by the many civic, learning, and play areas surrounding and between the buildings. The curved form of the terracotta-clad main school building is continued through the facade of the Branch Library, which serves as a transparent and welcoming beacon to activate the new civic plaza along Cambridge Street.

Dividing the facility into two buildings allows for the green spine that improves access to Donnelly field, an 1896 park. The complex is highly accessible to residents on foot, bicycle, and transit. Site planning includes crosswalks, bike share, a bicycle lane, and bicycle parking and a fixing station. Bus stops serve seven city lines, and there are two subway stations within three quarters of a mile.

The complex reflects a new type of civic building. During the school week, the two halves form a single building—the education wing on one side of the “green spine,” the community wing with shared spaces (gyms, cafeteria, auditorium) on the other. The community wing can remain open for public programming while the classroom building is closed. The Branch Library and the Public Pools bookend the community complex with complementary resources that are open to all.