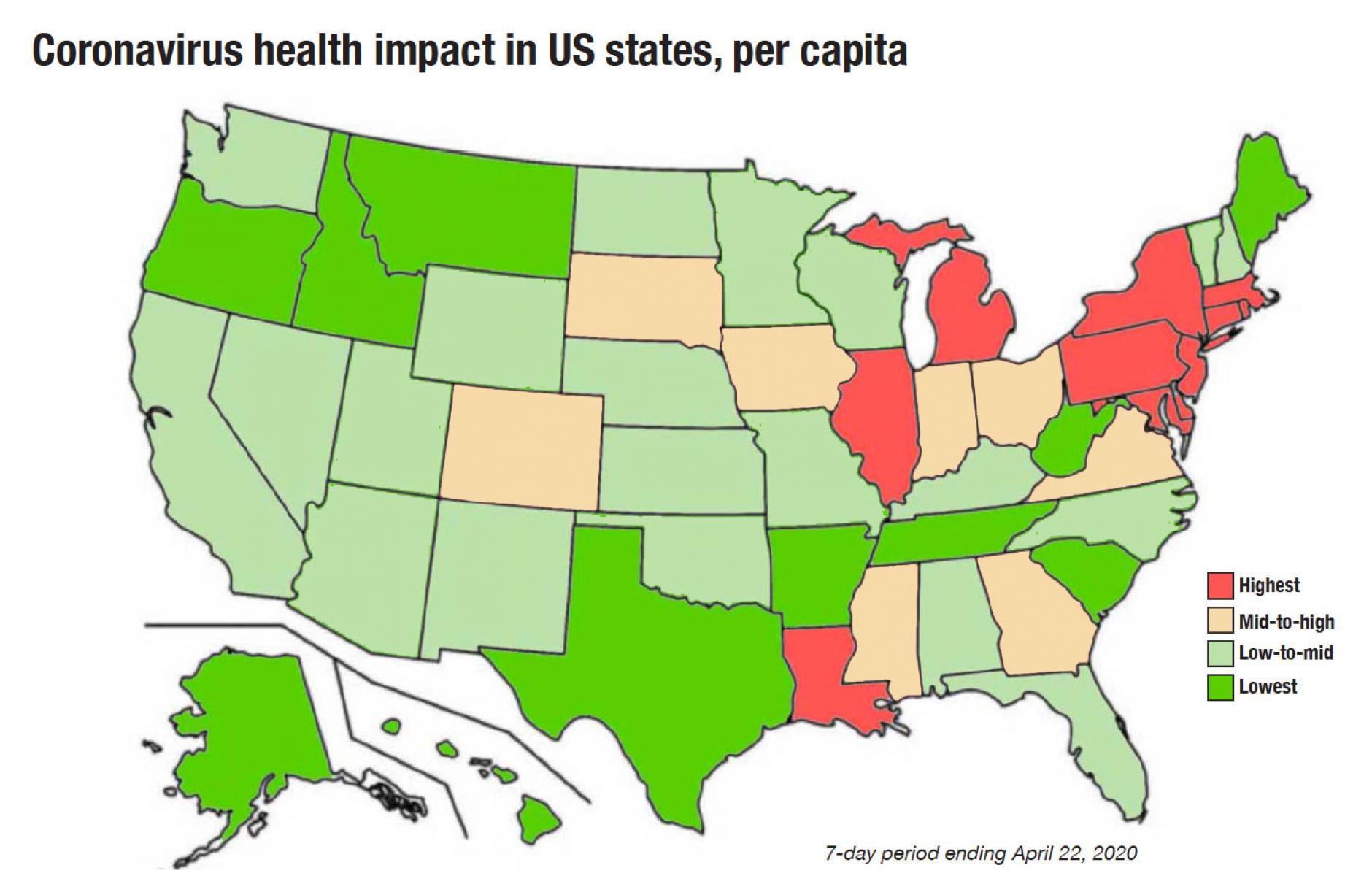 What are the risks in reopening? State of Coronavirus in America

At least half of the US population lives in states that are currently reopening, or making near-term plans to reopen, their economies in phases. The risks vary, because different states have higher or lower levels of confirmed cases and mortalities.
ROBERT STEUTEVILLE   &nbspAPR. 26, 2020

The fourth State of Coronavirus in America report looks at recent cases and mortalities across the US. Neither of these measures is adequate alone. As states continue to increase testing, the number of positive cases will tend to rise, even as actual infections may fall. Nationally, the number of daily confirmed cases has plateaued for two weeks. Mortalities are a lagging indicator, as they often occur a week or two after cases are identified. As mortalities drop in New York, the US epicenter, they are beginning to show signs of decline nationwide.

Both of these measures are combined to create the map at the top. The states with the most per capita cases and deaths in a seven-day period ending April 22--those states with the most immediate risk from the virus--are shown in red. States with the least per capita cases and mortality are shown in dark green. If things go well, states will turn from red to yellow and yellow to green in the coming weeks as we update the map. But states could move in the opposite direction, as well.

Some states took initial steps to reopen businesses and activities this past week, including South Carolina, Oklahoma, Alaska, and Georgia. The first three states have relatively few cases and mortalities, but Georgia, in the mid-to-high impact category, is the exception. That suggests that Georgia should be extra careful, but Georgia began to reopen businesses with close personal contact, including hair salons, on Friday. Other states, like Minnesota, Mississippi, Montana, Kentucky, and Tennessee, are launching phase one of reopening on Monday. Mississippi, like Georgia, is in the next-to-highest category on the health impact map.

Most of the states that are opening early are low-impact states. Texas, the largest population state colored dark green, will begin phase one of reopening on Friday. The states in the highest-risk category--such as New York, New Jersey, and Michigan--all appear to be at least several weeks away from reopening their economies--but this depends on continued improvements in infections and mortalities.

In the two tables below, I show the numbers that went into the map. There is a huge difference between the impact of the virus around the US—particularly between the most and least affected states. The death rate in New Jersey is 100 times that of Hawaii. 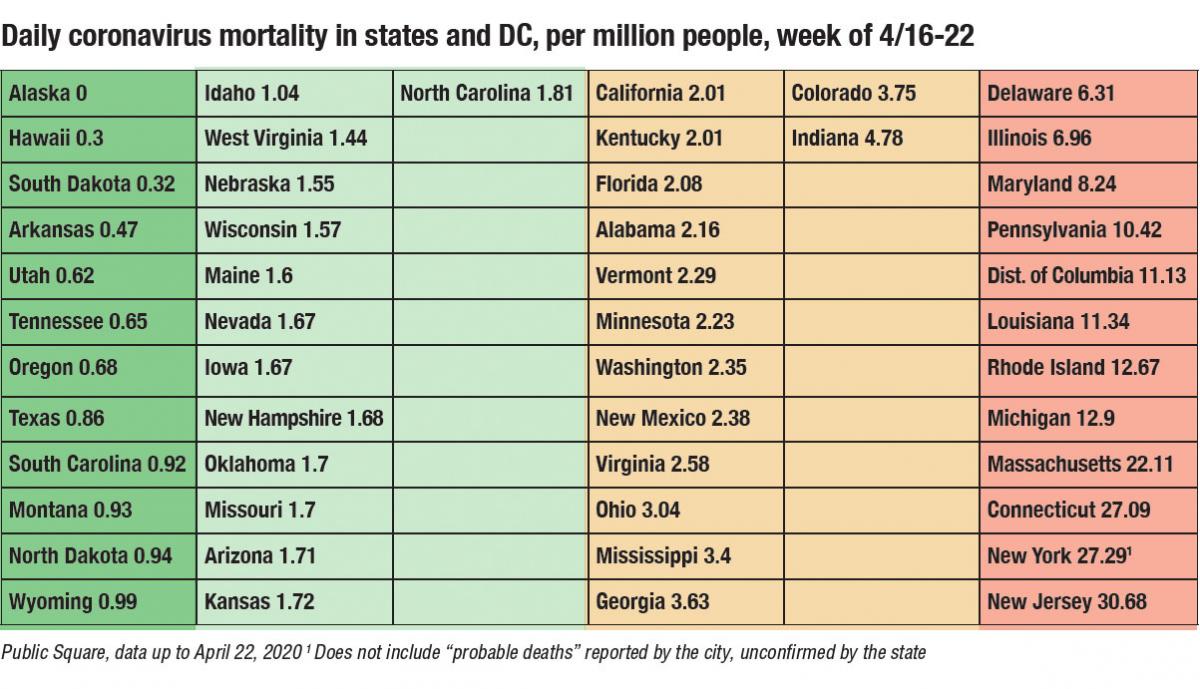 There are few surprises in comparing the two tables. States with low numbers of confirmed cases tend to have relatively low mortalities, and vice versa. One exception is South Dakota, which is in the lowest category of mortality and the highest category of cases. That is due to the large meat-packing plant outbreak in Sioux Falls. The Smithfield Foods outbreak was first reported one month ago, March 25, and Minnehaha County, where Sioux Falls is located, accounts for more than 80 percent of the state’s cases. It is genuinely surprising that South Dakota has maintained such a low mortality rate. This may change in the coming weeks, but so far officials appear to have done well containing the spread among workers and their immediate families. More than half of the Smithfield cases have recovered. A similar outbreak occurred at a Tyson plant in Iowa, which accounts for that state showing up yellow on the national map.

Why are meat-packing plants risky? One analysis notes that many employees work closely together (the Smithfield plant has 3,700 workers), shouting to one another over the noise of heavy machinery. These outbreaks, and others, test the government’s and industry’s ability to contain the virus in localized events, and prevent more from happening in the future. The is employing masks and barriers.

Long-term care facilities continue to be a major area of concern in every state, because of the close personal contact, the large numbers of employees, the frail residents, and the potential of asymptomatic spread. As states reopen economies in phase one, the high level of care that is now taken to protect these facilities will not diminish according to the guidelines.

These numbers are reported state by state, but within every state there are localized areas of high and low impact. Nearly half of California’s cases, and more than half of its mortalities, are in Los Angeles County. But this county is roughly the size of Michigan in population, and the overall impact is still lower than the states colored red on the map.

The next week will be critical to watch the numbers as states move forward with phase one. I certainly hope that we see improvement as Americans continue to practice care and social distancing.