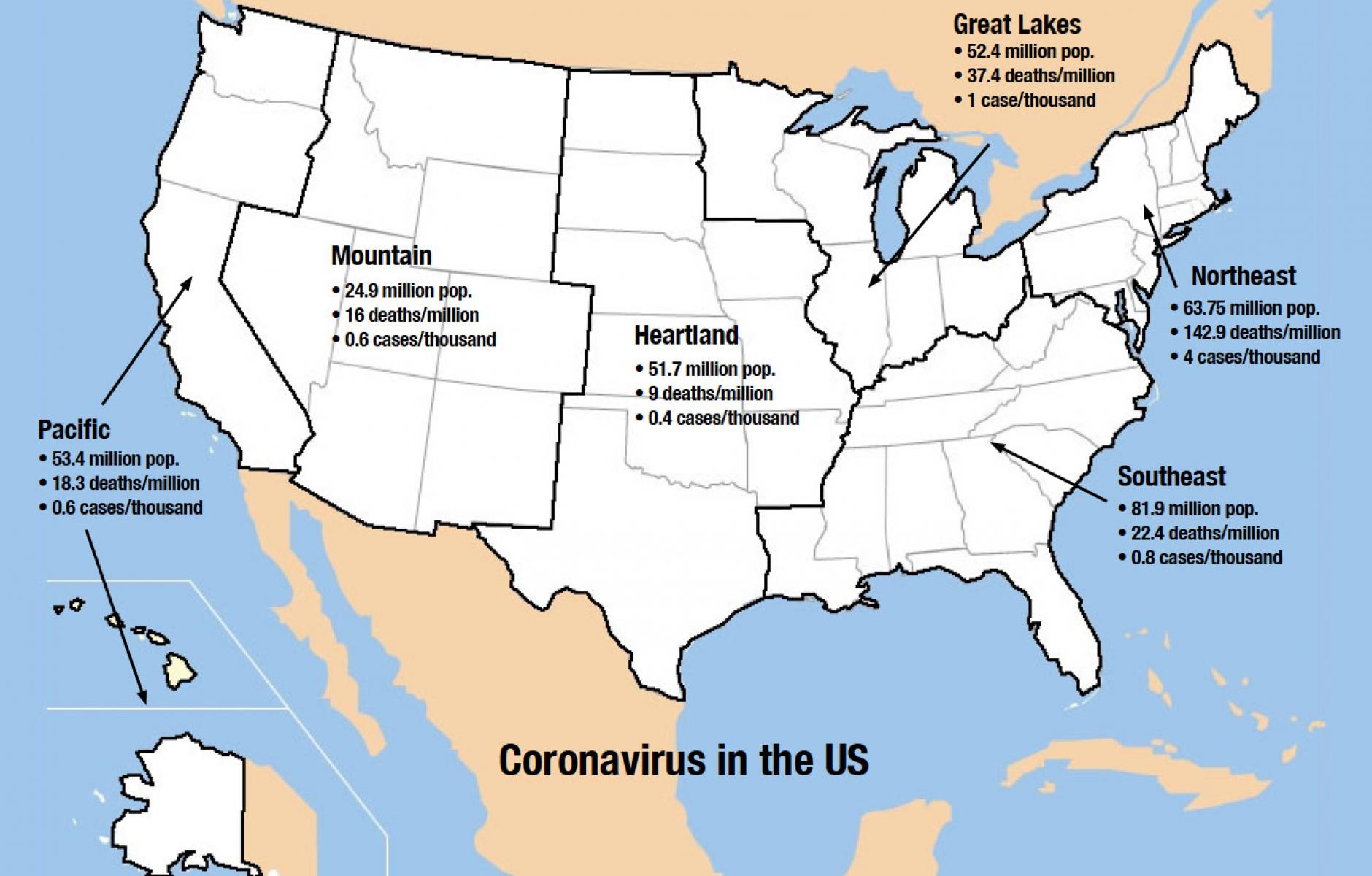 State of Coronavirus in America, update

The virus appears to have peaked or plateaued across much of the US, even as New York and other hotspots bear the worst of the crisis.
ROBERT STEUTEVILLE   &nbspAPR. 10, 2020

At the end of a traumatic and deadly week for the coronavirus, there are signs that the crisis may be easing in large parts of the US. At this time last week, both deaths and cases were rising in every part of the nation—although the northeast was the worst hit by far. Now, cases and deaths appear to have peaked or plateaued in much of the nation.

There are still serious continuing hotspots, the worst being the New York City metro area, where the virus is taking its heaviest toll. Deaths have risen to new levels in Michigan, where the outbreak is centered on the Detroit area. Mortality may have peaked in the other major US hotspot, Louisiana, where the number of new cases crested a week ago. Other states of continuing concern include Illinois, Massachusetts, Colorado, and Pennsylvania.

The first of Public Square's State of Coronavirus in America reports, published a week ago, focused on per capita mortality to show trends in geographic regions throughout the US. This report expands the analysis to include cases, which depend on the level of testing but are nevertheless bellwethers in this crisis. Every number in this report is a per capita rate, unless otherwise stated.

The data is gathered from the Worldometer, which gets high marks for accuracy and is updated constantly.

US deaths are rising from the coronavirus, up 185 percent in the last week. The Northeast accounts for more than 60 percent of the total, 16 times the level in the nation’s heartland region. States west of the Mississippi River have been much less affected—all three western regions are well under 1 case per thousand residents. Outside of the Northeast, the Great Lakes area is most impacted. Even within the two hardest hit regions, some states are lightly affected. About 40 states are well below the national average in recorded coronavirus cases.

The US toll remains much lower than the worst-hit European countries, represented by Italy in the graph below. The UK, where both Prime Minister Boris Johnson and Prince Charles have been ill, is headed towards a profile similar to Italy. Germany has been among the most successful European countries in controlling its outbreak. The US is somewhere between Germany and the UK.

US deaths have dropped off a bit in the last two days. Confirmed COVID-19 cases have also fallen slightly in the US—the peak so far is April 4. See the graph below.

This tapering of cases is evident even as the US has ramped up testing in the recent weeks, up to more than 100,000 per day. Nations where the outbreak has lessened have seen a peak in cases about a week before mortalities peak, give or take a few days. If the peak in cases holds, we will likely see a drop off in mortality in the next week. It is telling that, in the worst week of the coronavirus, the stock market (up to Thursday) had its best week in 46 years. The stock market, at least, is beginning to see the light at the end of the tunnel. Still, the tunnel may be long and much can change.

The worst fear is that outbreaks will occur all across the country at levels that we are seeing in New York. Earlier this week, a University of Texas study found a very high probability of outbreaks in counties across the US. “If a county has detected only one case of COVID-19, there is a 51% chance that there is already a growing outbreak underway. COVID-19 is likely spreading in 72% of all counties in the US, containing 94% of the national population,” the researchers say.

Luckily for the nation, that is not what appears to be happening so far. When nations and regions have big outbreaks (e.g. Italy, Spain, France, UK, and the northeast US), the cases and deaths ramp up very quickly. The US is seeing a very different pattern in every region except the northeast.

This has been a terrible week for the northeast, with the death rate hitting its highest levels in the last three days.

The cases in the Northeast may have hit a plateau—or they may still be rising. The graph could be read either way, and the next few days will determine which interpretation is correct.

The crisis is centered on New York City, where the death counts in the city and region are still rising. New cases in New York State appear to be hitting a plateau of just over 10,000 per day total. New Jersey is nearly as hard hit, although the story there is somewhat different. Garden State deaths dropped yesterday and new cases are clearly down from last week.

Massachusetts is less hard hit than New York and New Jersey, but the trends are not encouraging. This state is seeing a rising number of confirmed cases, which spiked yesterday to more than 2,000 total. Cases and deaths in Connecticut are down from earlier in the week, indicating that the worst may be over for the Nutmeg State. Pennsylvania has stayed under the national average for mortality, but new cases have risen this week. The same goes for Rhode Island and the District of Columbia.

Outside of the northeast, the Great Lakes states are the biggest area of concern. As shown in the next two graphs, mortality is still rising and identified cases appear to have hit a plateau.

The good news in Michigan, the worst hit state in this region, is that cases have dropped off substantially in the last two days. The trend in Illinois, however, is not looking good—cases have risen substantially this week. Deaths were highest there on Tuesday and Wednesday, falling a bit on Thursday. The crisis appears to be under control in Ohio, Indiana, Wisconsin, and Minnesota.

New cases appear to be past their peak in the southeast. Mortality may have peaked yesterday. The next few days will tell the tale.

The outbreak in the southeast is centered on Louisiana, and New Orleans is the nation’s third hotspot. Cases in Louisiana appear to have peaked about a week ago, and are down substantially in the last few says. Deaths hit a high point on Tuesday and Wednesday of this week.

Albany, a town in southern Georgia, had a couple of well-publicized “super spreader events” in early March. The lack of medical facilities in the area have highlighted the vulnerability of rural communities to a viral outbreak. While most rural communities nationwide have been lightly affected by the coronavirus, there are places like Albany that have been hard hit.

The nation’s heartland region, generally consisting of the Great Plains, continues to be most lightly affected by COVID-19. Deaths were down yesterday in the heartland, to the second lowest level in six days.

Deaths in the mountain region jumped yesterday, and they have bounced up and down for the past week.

New cases appeared to have hit a peak in this region, but a surge in Colorado yesterday brought cases back up to where they were April 1.

There is no clear pattern here, except that the region seems to be on a plateau since the start of the month. Like every state and region west of the Mississippi, this region has had relatively few cases and deaths. The Denver metro is a localized area of concern.

Like last week, the news is good in the Pacific region. Deaths are plateauing, and they were highest on April 4 and April 8.

Cases show a pattern of having peaked in the Pacific region, which includes Alaska and Hawaii.

The Pacific region is where the US outbreak began in January. This region’s control of the virus bodes well for the rest of the nation. Tellingly, governors in Oregon and California began shipping ventilators this week to other parts of the country.

Social distancing across the US

Positive signs in the midst of the worst week of the crisis have been attributed to the widespread compliance with social distancing. Orders and guidelines on social distancing have been substantial coast to coast. Stay-at-home orders have been put in place in 41 states and the District of Columbia. K-12 schools have been closed nationwide. Sporting events and large gatherings have been canceled, and college students have been sent home to study online.

Of the states without stay-at-home orders—all relatively lightly hit by the virus—one has a stay-at-home advisory for senior citizens and the rest are still covered by the federal social distancing guidelines.

Nearly every aspect of American life has dramatically changed in recent weeks. Aside from essential jobs, nearly every worker is at home—some are fortunate enough to keep their jobs online, and others are laid off—jobless claims have surpassed 16 million since the crisis began.

Scientists are unsure whether the end of the cold and flu season will help to alleviate the coronavirus. Most of the heavily impacted nations have been in the northern hemisphere, during winter and early spring. Although exceptions are many, the southern US states have been far less impacted than those in the north. The map below divides the nation, more or less, on the latitude of the old Mason-Dixon line. Mortality is five times, and cases are four times, higher in the north.

Overall, this was a terrible and depressing week in the US, but the dark cloud has silver linings. The numbers in the next few days will determine whether current trends continue. In the nation’s hotspots, we need to know whether the worst is, or soon will be, over. In the more fortunate regions, the next week may confirm whether or not communities have avoided the worst fate.