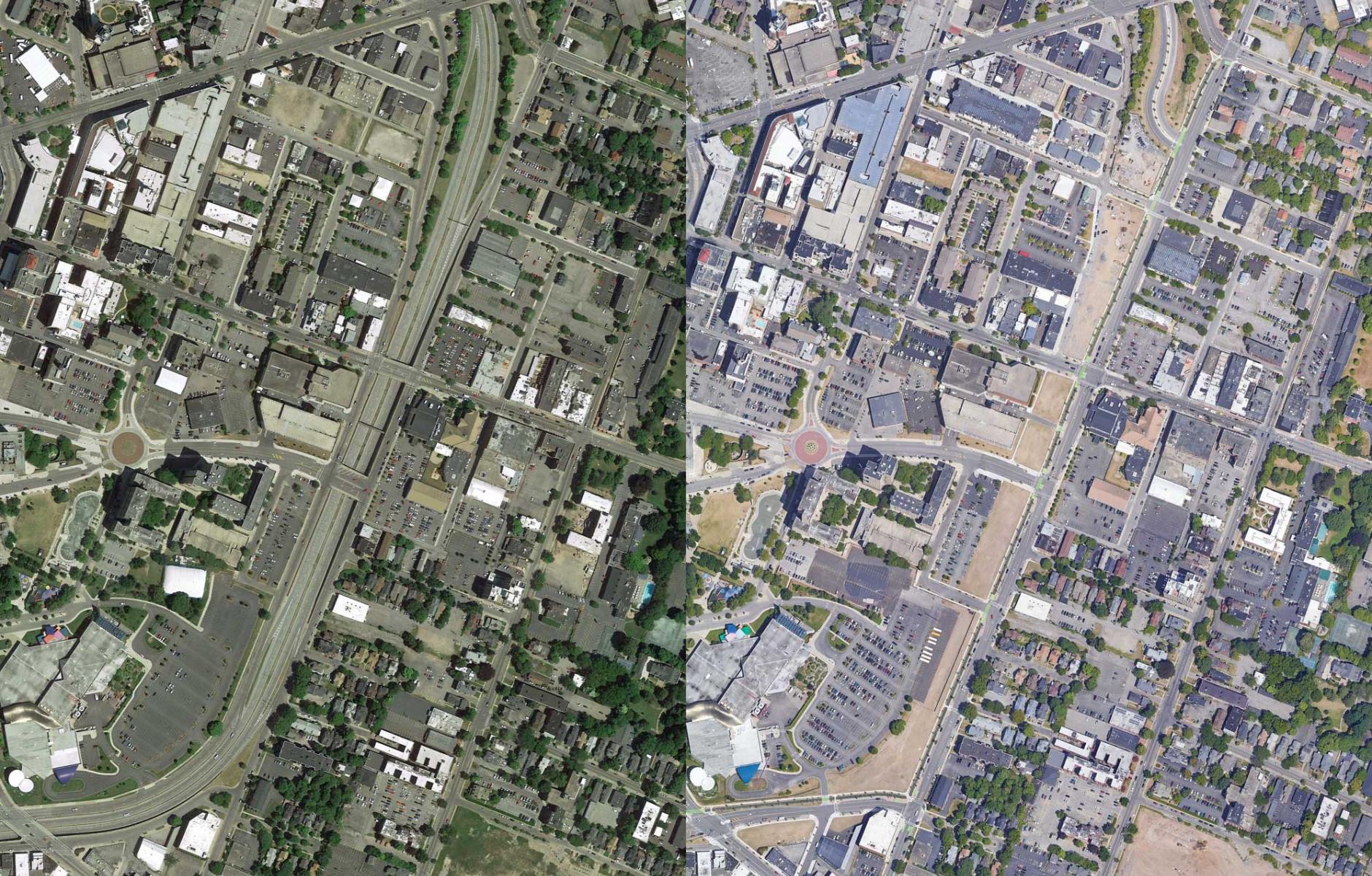 The Inner Loop in Rochester, left, before the section was converted to surface streets, opening up land for development, at right.
Freeway transformation

A pilot program proposed to fund the study and removal of highways in urban contexts, an idea of great interest to urbanists, has largely flown under the radar.
BEN CROWTHER   &nbspAUG. 13, 2019

Prior to departing Washington for August recess, the Senate Committee on Environment and Public Works unanimously advanced in a vote of 21-0 the bill S. 2302, America’s Transportation Infrastructure Act of 2019.

Others have already looked at the bill’s commitment to further highway spending, its acknowledgement of climate responsibility, and provisions for bike and pedestrian infrastructure. But one section, which should also be of great interest to urbanists, has largely gone under the radar.

Among its other provisions, the bill introduces the Community Connectivity Pilot Program, which funds the study and removal of highways in urban contexts. The program allocates money for three uses: planning grants, a technical assistance program, and capital construction grants. It provides up $2 million for each planning grant and a total of $15 million for all technical assistance projects through 2025. Each capital construction grant will receive a minimum of $5 million. The program’s construction grants cannot exceed 50 percent of the total cost of the project and total federal assistance cannot exceed 80 percent.

Several aspects of the program are novel. To start, municipalities, metropolitan planning organizations, and even community-based non-profit organizations are eligible to apply for planning grants. Grassroots movements often initiate the call to remove the highways that have damaged their neighborhoods and communities, but they lack the financial resources to conduct the studies that look at the benefits of removal. This program offers them that opportunity and they can leverage professional expertise from outside the normal channels of infrastructure development to support their case.

The pilot program also specifies some of the urban design qualities that will reintegrate the former highway’s right-of-way back into the city once it is removed. Streets that replace the highway must be “sensitive to the context of the surrounding community” and “improve mobility and access through the removal of barriers,” while the overall project has to demonstrate “opportunities for inclusive economic development,” which is most easily achieved through the development of the land reclaimed from the highway. These qualifications help ensure that the highway isn’t simply replaced by a six- or eight-lane wide arterial. Instead, the new streets must be able to support successful urban places and pedestrian life.

All told, the bill has the potential to reconnect the urban communities divided by freeways and help spur the conversion of these highways into boulevards and streets, the lifeblood of any city. However, it is still far from law. Next steps include vetting by the Senate’s Banking, Commerce, and Finance Committees before the Senate votes upon it. The House of Representatives will also have to pass either their own transportation bill that includes a similar program or the Senate’s version.

Auspiciously, a nascent bill recently introduced in the House, H.R. 4101, the Build Local, Hire Local Act, already includes an urban highway removal program (the Connect Communities Program), structured along comparable lines, but with an even greater emphasis on the integration of transit, affordable housing, and mixed-use development into highway removal projects.