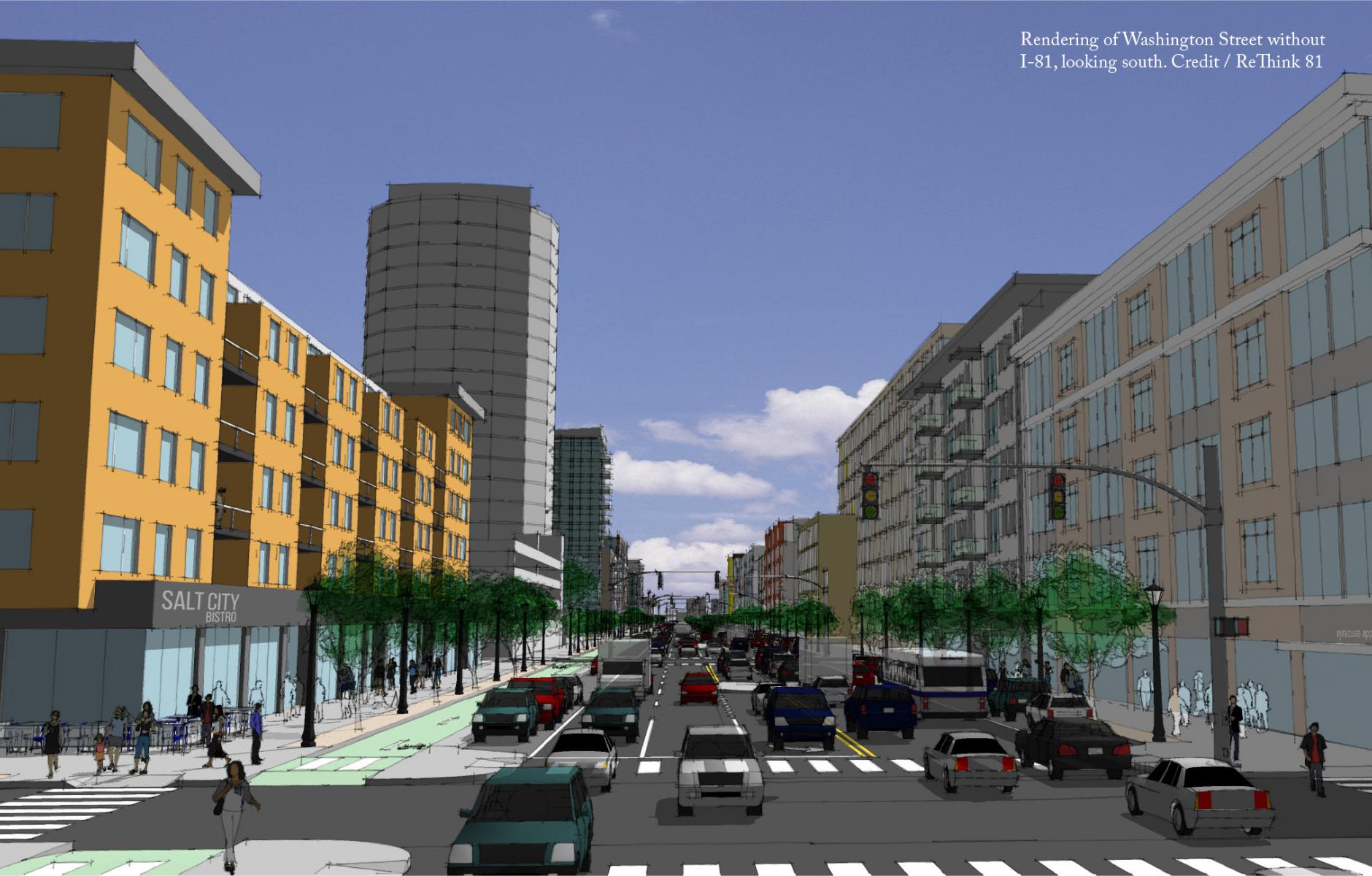 Since 2008, CNU has highlighted the advantages of transforming the elevated I-81 through the heart of the city.
ROBERT STEUTEVILLE   &nbspAPR. 23, 2019

New York State DOT has selected the “Community Grid” as the preferred alternative for Interstate 81 in Syracuse, a plan that would allow the elevated viaduct that has severed city neighborhoods since the 1950s to revert to a grid of streets.

I-81 leveled African-American and ethnic neighborhoods, cut off downtown from the east side, which includes major employers, and contributed to the city’s decline. The DOT endorsement came in the form of a draft environmental impact statement (DEIS), reported Monday.

"NYSDOT has shown great responsiveness and responsibility toward a better outcome for Syracuse's I-81 corridor," says Lynn Richards, President and CEO of CNU. "Restoring the grid is an especially wise choice, and we are glad the state DOT agrees. We will engage CNU members from our NYS chapter and Highways to Boulevards work to help ensure Syracuse creates a community grid that meets people where they are—on foot, on bike, running errands, and on their way home.”

The Community Grid has garnered strong political support recently. It was an issue in the 2018 mayoral campaign, as candidates getting more than 90 percent of the votes supported taking down the viaduct and rerouting the Interstate around the city center on existing highways. In recent days Syracuse University, Upstate Medical University and SUNY College of Environmental Science and Forestry all endorsed the community grid. The Post-Standard (Syracuse.com) endorsed this plan in 2018 in an editorial.

CNU was ahead of many current supporters, as I-81 in Syracuse bears the distinction of being the only in-city highway to be included in every CNU Freeways Without Futures report—six times, dating back to 2008. Over the years, CNU highlighted the historical damage the freeway has done to neighborhoods and the city, and the economic boost that the city would receive from getting rid of the freeway segment. “Supporters have suggested nearby I-481 could act as the main carrier for through-traffic, while elevated I-81 would be replaced with an urban boulevard that would reconnect downtown neighborhoods, be less costly to maintain, and increase economic activity along the corridor,” we wrote in 2014. In recent years, the boulevard plan was modified in favor of the Community Grid.

This decision could have been made several years ago. In 2016, Gov. Andrew Cuomo called the highway “a classic planning blunder,” and a 2017 study by NYSDOT determined that restoring the grid was the least expensive of all options. But a group Save 81, with powerful political support from the region’s suburbs, delayed this decision—pushing for a tunnel option that was poorly conceived from the start. The latest estimates for the tunnel are running almost $5 billion, and the DOT has termed it “unreasonable.”

The decision by DOT is a key step, but more hurdles must be cleared. According to Syracuse.com:

The state’s preferred alternative in the DEIS is not the end of the process. There are still numerous public hearings to be held before a final environmental statement and a record of decision that will ultimately seal the highway’s fate.

DOT’s impact statement is vindication for early supporters of this plan, such as former Common Council member Van Robinson, who publicly proposed the idea in 2001. If it were not for Robinson, who retired from council in 2017, CNU would likely not have highlighted the campaign starting in 2008. It is a win for current supporters, such as the grassroots organization Rethink 81.

Save 81 appears to be determined to continue this fight. The supporters of the Community Grid, including the city, major employers, and now New York State, should not let this group delay the project further. Notes the editorial board of Syracuse.com:

After 10 years, the release of the DEIS means the community is one step closer to remaking I-81. Let’s get on with it.

Freeways Without Futures   I-81   Syracuse