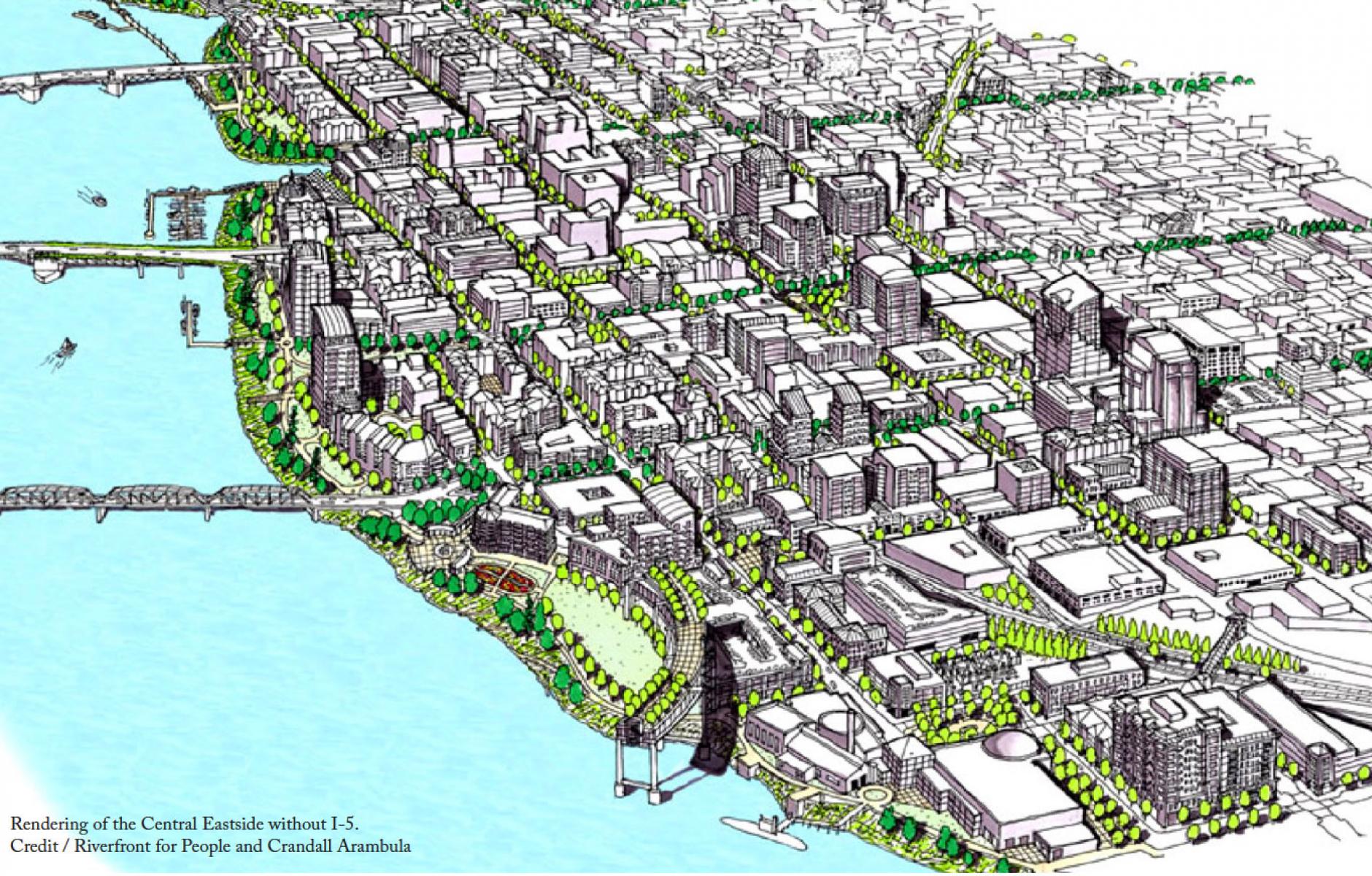 A chance to repeat history

Portland, Oregon, could open up the east bank of the Willamette River to adjacent neighborhoods and duplicate the success of the removal of Harbor Drive.
BEN CROWTHER   &nbspAPR. 12, 2019

Portland is a tale of two waterfronts. On the west bank of the Willamette River, Waterfront Park offers Portland’s residents direct access to the river in place of the former route of Harbor Drive, a freeway removed by the city in 1974. On the river’s east bank, I-5 deprives the growing Central Eastside neighborhood of similar access, but offers Portland a chance to repeat history.

Ironically, the construction of I-5 facilitated the removal of Harbor Drive. Once the new Interstate was built in 1966, Harbor Drive was viewed as redundant, and a citizen-based campaign, Riverfront for People, advocated for and successfully championed its removal and replacement with Waterfront Park.

When I-5 was constructed, Portland’s Central Eastside was primarily an industrial area. But in recent decades, many of the larger industrial businesses have decamped to other regional locations, and the area has transitioned into a wider mix of uses that combine offices and housing with small-scale industrial businesses and manufacturers.

The neighborhood has become a destination for locals and visitors alike because of its high concentration of breweries and distilleries. This transformation has been constrained by the freeway, leaving a major gap in activity and preventing the neighborhood from reaching its potential along the river.

The challenges for this neighborhood are only increasing with time. By 2035, Central Eastside is expected to grow by 7,000 households and 8,000 jobs. Such strong growth will put a premium on housing and likely will lead to rising costs, unless preventative measures are taken. At the same time, the neighborhood’s density will increase. More residents can live closer to their jobs, which lessens the city’s need for extensive highway infrastructure.

Central Eastside’s rapid growth makes this an opportune time to consider the removal of I-5, to be replaced by surface streets. The 43 acres gained through highway removal would increase business and housing opportunities, which in turn would help accommodate the area’s growth. Removing the freeway would enable the Central Eastside neighborhood to take better advantage of its existing transportation options.

Removing the highway would also create an opportunity to enhance the existing Eastbank Esplanade into a signature park in the heart of the city where people could enjoy the Willamette’s new accessibility via transit, through the regional bike network, and from the many residences and hotels that are within a 30-minute walk from the location.

Many ideas for transformation of I-5 at this location have been explored. Most recently, then-Mayor Sam Adams released a plan for a tunnel in 2012. However, a tunnel might add unnecessary expense—a combination of other routes in the city have the potential to support the traffic capacity of I-5. Interstate through-traffic could be rerouted to I-405, a short highway west of downtown that runs parallel to, and connects with, I-5 at both ends.

Groups like Riverfront for People have long campaigned for the removal of the elevated I-5 and current political momentum in the city is gathering against overbuilt highway infrastructure. The citizen group No More Freeway Expansions Coalition is working to block the ODOT’s expansion of I-5 in Portland’s Rose Quarter, just to the north of the Central Eastside. This is an opportunity to reconsider whether other parts of the highway are necessary. A redesigned Central Eastside riverfront, made possible by highway removal, is not hard to imagine. Portlanders need only look across the river.