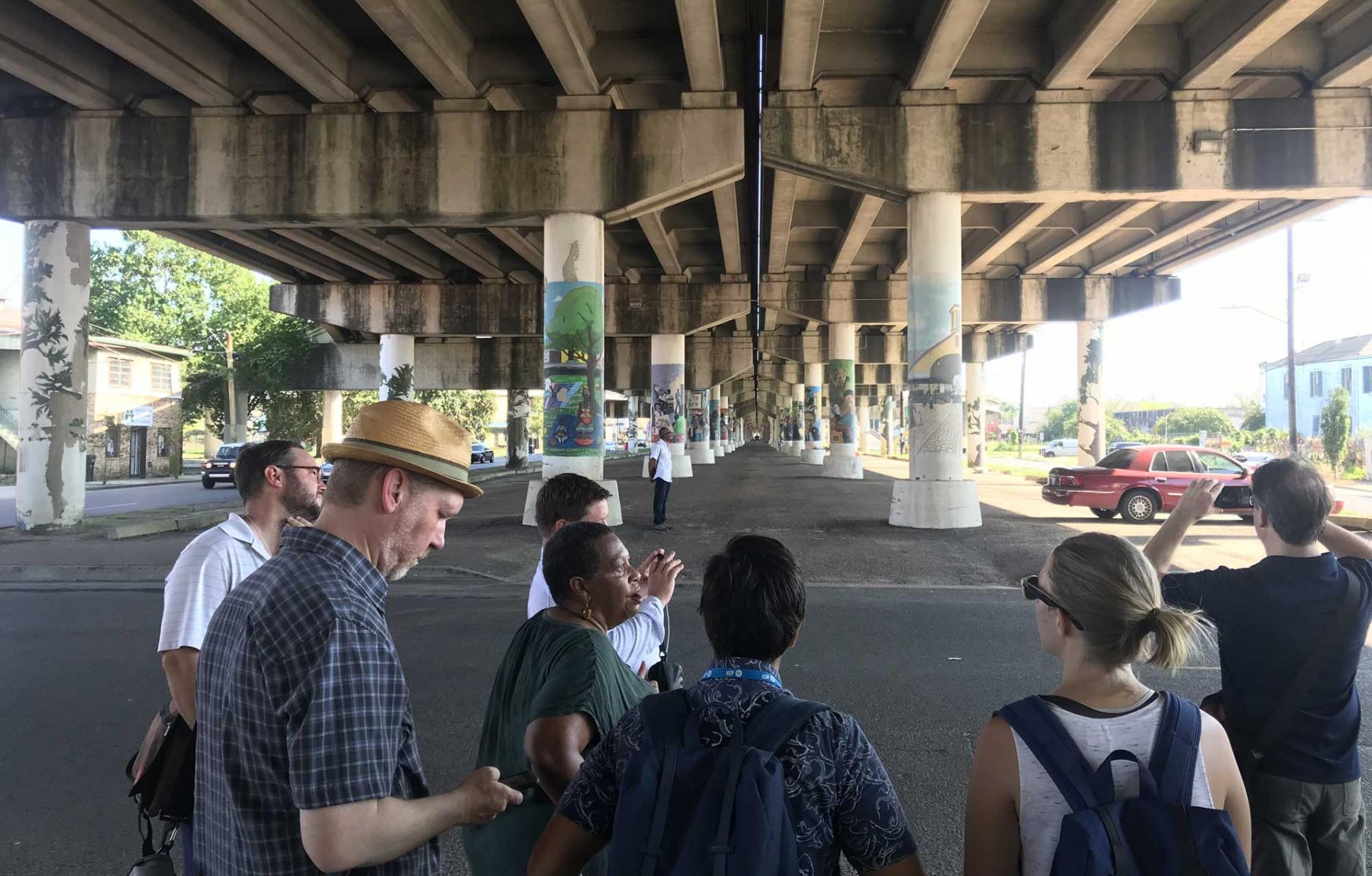 “Caused folks around here a lot of heartburn.”

With this phrase, Amy Stelly described the ongoing anguish that the Claiborne Expressway has caused for the members of the predominantly African-American community of New Orleans’ Tremé neighborhood.  Ten years ago, Stelly helped found the Claiborne Avenue Alliance, a coalition dedicated to the removal of the six-lane elevated expressway. Built in 1969, the expressway cut straight through Tremé’s residential district and destroyed nearly 500 homes as well as Claiborne Avenue’s famous oak trees. Last month, Stelly led attendees of CNU’s Transportation Summit on a tour of the neighborhood to see firsthand the potential to redevelop the elevated expressway back into the vibrant avenue it once was. 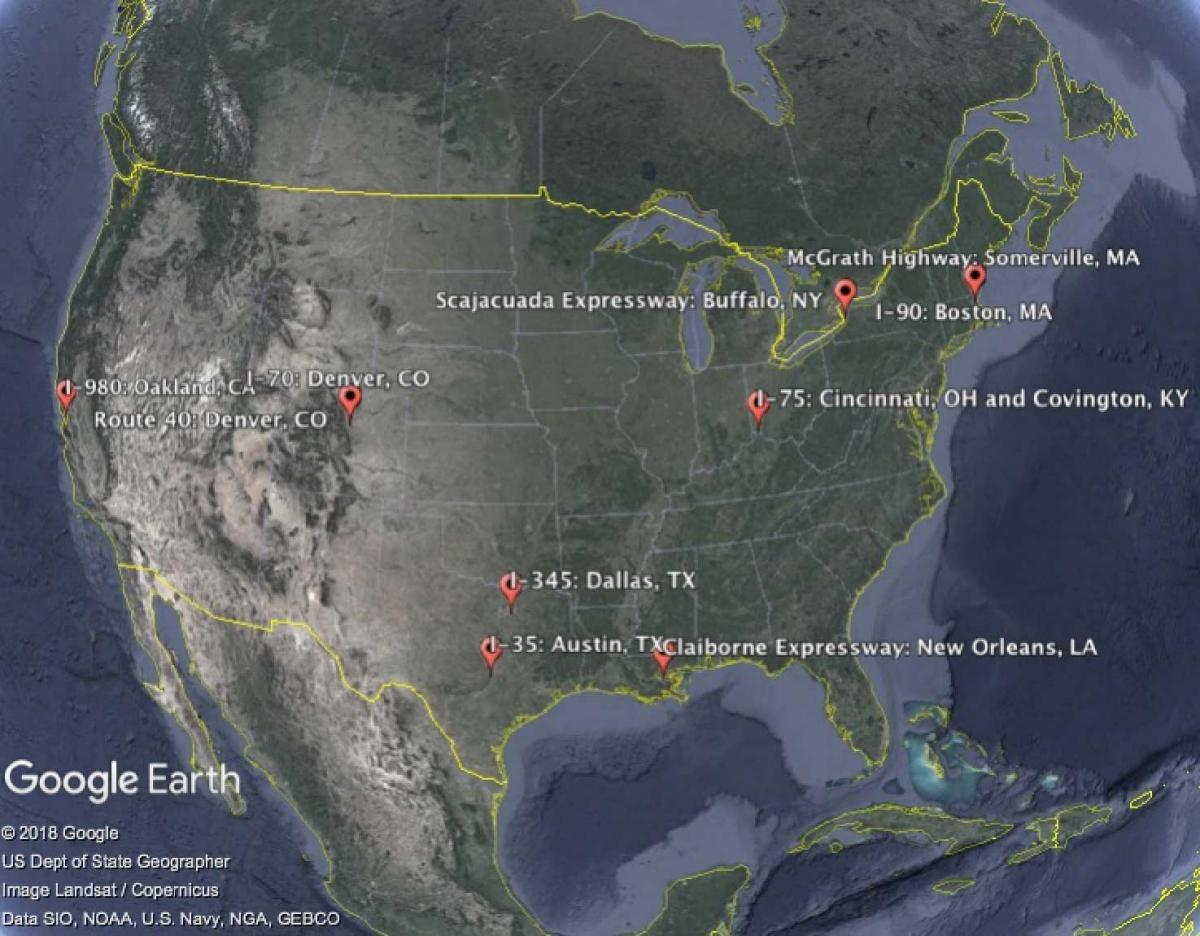 This year's Transportation Summit focused specifically on the revitalization of urban neighborhoods disrupted by limited-access highways and the local campaigns to transform these disruptive arteries into surface streets and boulevards. Organizers from ten different campaigns across the country came together in New Orleans to discuss their efforts to restore the vibrant, diverse, and functioning city neighborhoods destroyed or isolated by the construction of urban freeways. Some of these campaigns tackle stretches of interstate highways that intrude upon the city, like I-980 in Oakland and I-35 in Austin. Others target specific junctions, such as the Allston I-90 interchange in Boston and the Route 40 Colfax/Federal interchange in Denver. A third category seeks to limit the expansion of existing highways into the adjacent urban fabric, like the Ditch the Ditch campaign in Denver and a nascent campaign that opposes the enlargement of I-75 across the Ohio River into Cincinnati and Covington, KY. The common goal between them all is a restoration of streets on a human scale to rebuild and promote cohesive neighborhoods and communities.

Many of the campaign organizers offered perspectives on highway transformation from outside the fields of planning, architecture, and transportation. Lisa Saenz professed that she was neither a planner nor architect, but rather a concerned and involved community member from Denver’s Sun Valley neighborhood who was no longer willing to tolerate the danger pedestrians and cyclists face at the Route 40 Colfax/Federal interchange. Since 2012, 36 traffic-related pedestrian and cyclist accidents have occurred in the vicinity of the interchange, four of them fatal.[1] 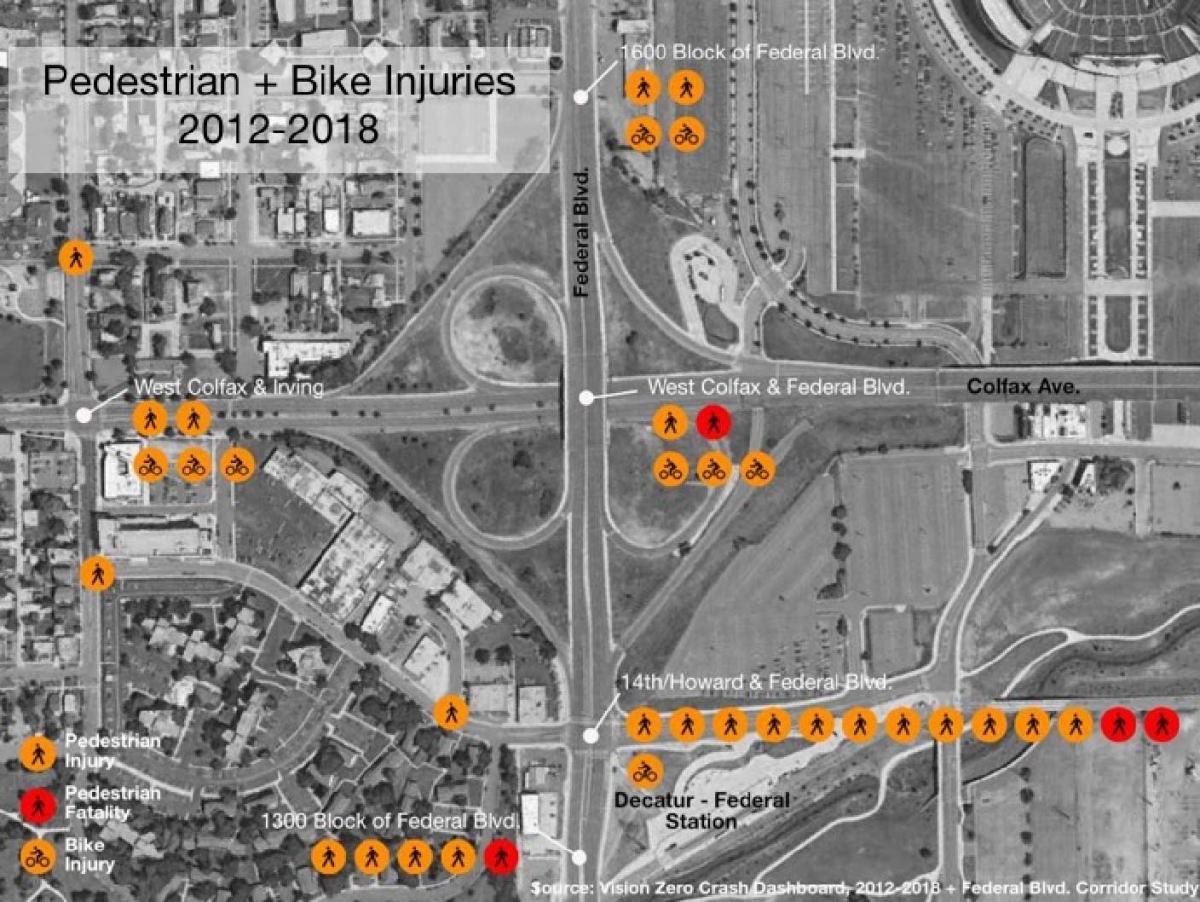 To make the streets safer for pedestrians, Saenz joined forces with Dan Shah, director of the West Colfax Business Improvement District. Their organization, Over the Colfax Clover, seeks to replace the cloverleaf interchange with an at-grade solution, which would be more than capable of handling the current level of traffic. For inspiration, Saenz and Shah look no further than the nearby at-grade intersection of Colfax and Colorado Boulevard, which accommodates more vehicles than Colfax and Federal, but occupies 1 percent of the real estate of the interchange. The proposed removal of the cloverleaf offers an opportunity to develop valuable urban land close to the heart of the city. 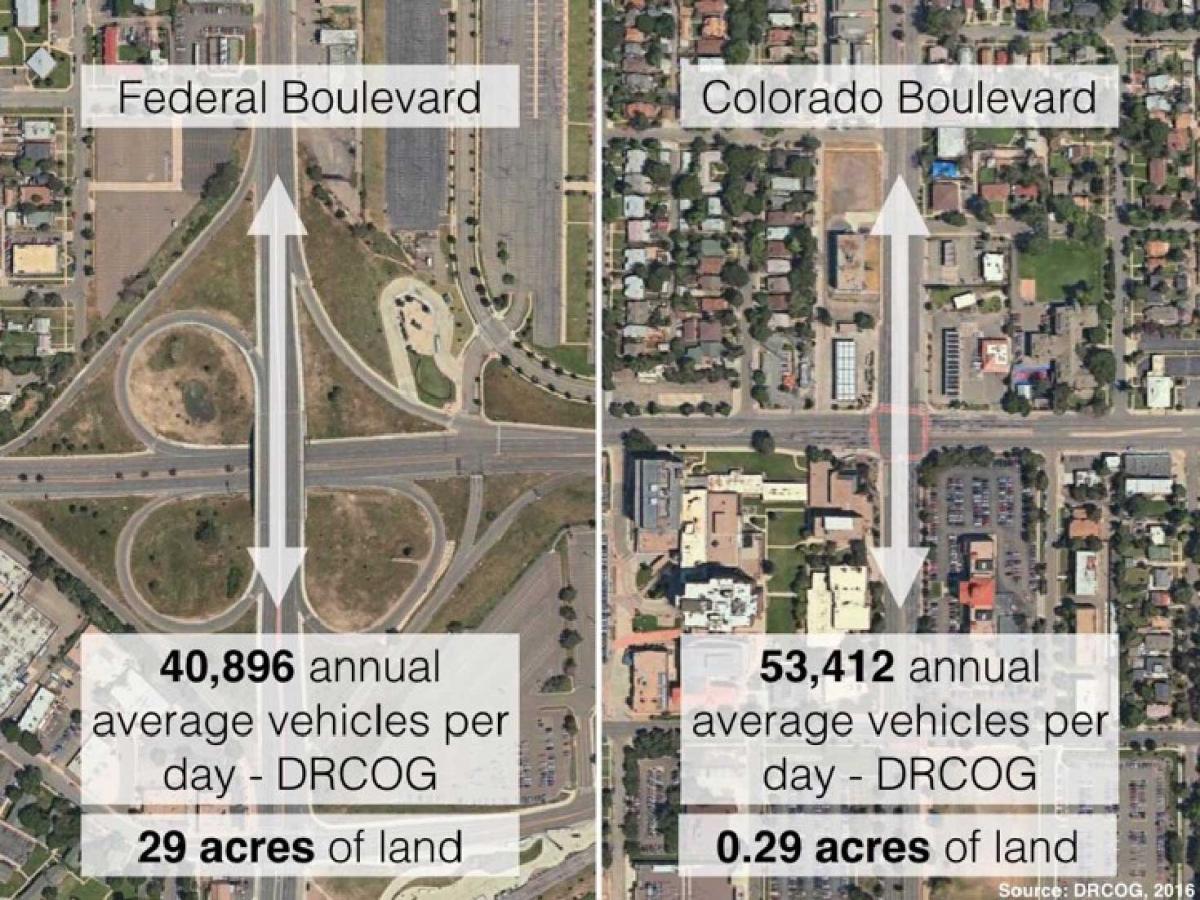 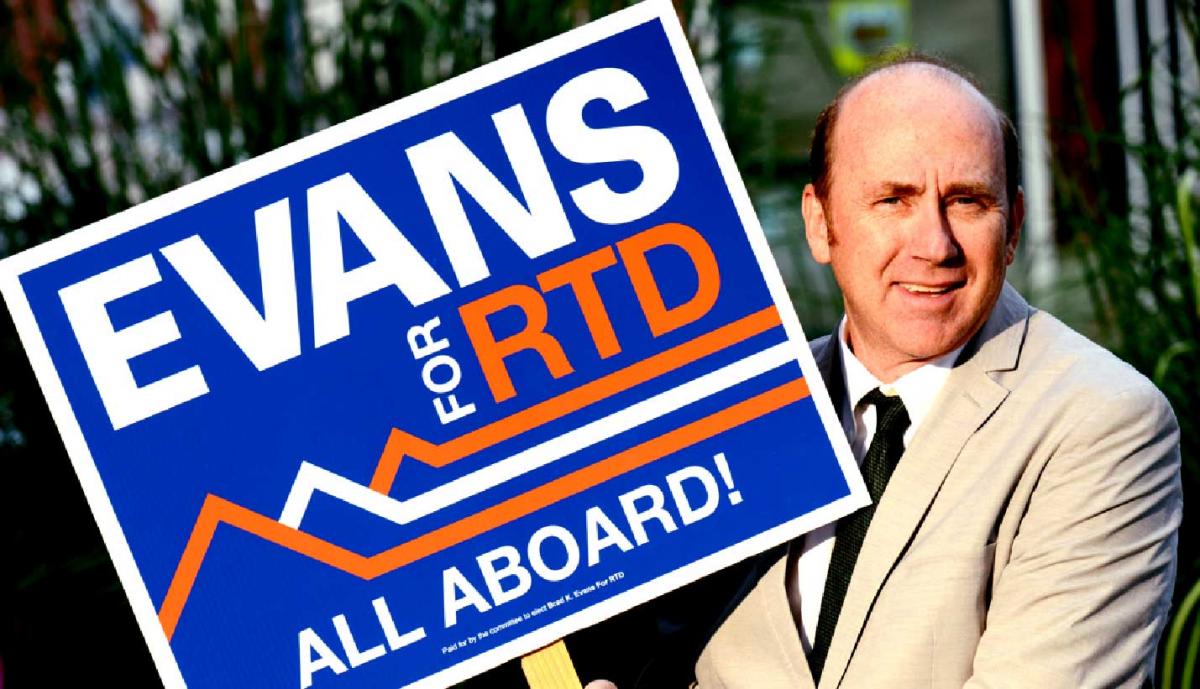 Evans is not the only campaign organizer to turn political over the course of a campaign. Patrick Kennedy formed the political action group A New Dallas to promote the removal of I-345 and reconnect the Deep Ellum district with the rest of the city. This group operates a full-time campaign dedicated to restore Dallas’ urban core through the removal of the underutilized freeway and transform the surrounding 245 acres of parking lots and empty land back into a thriving neighborhood that will generate jobs, create affordable housing, and make Dallas less car-centric and more pedestrian friendly.

By the end of the day, participants had discussed at length the issues of gentrification and displacement that have spurred neighborhood opposition to highway removal and how to ensure that the economic value unlocked by taking down an elevated expressway is channeled to serve the members of the current community. Campaign organizers and summit attendees made a commitment to ensure that their highway transformation projects planned in advance options for funding affordable housing opportunities and preventing the displacement often caused by neighborhood redevelopment. Without this commitment, they recognized that the removal of an urban highway might damage communities just much as its construction.

To see CNU’s ongoing work on highway transformation, visit our Highways to Boulevards page. CNU is currently accepting nominations for our 2019 Freeways Without Futures report that covers examples of city highways in North America that are too costly to repair and for too long have isolated urban neighborhoods and communities. To nominate a highway, click here.

[1] Colfax Avenue and Federal Boulevard belong to a group of 27 streets in Denver that make up 5% of the city’s street network, but account for 50% of traffic-related pedestrian fatalities.