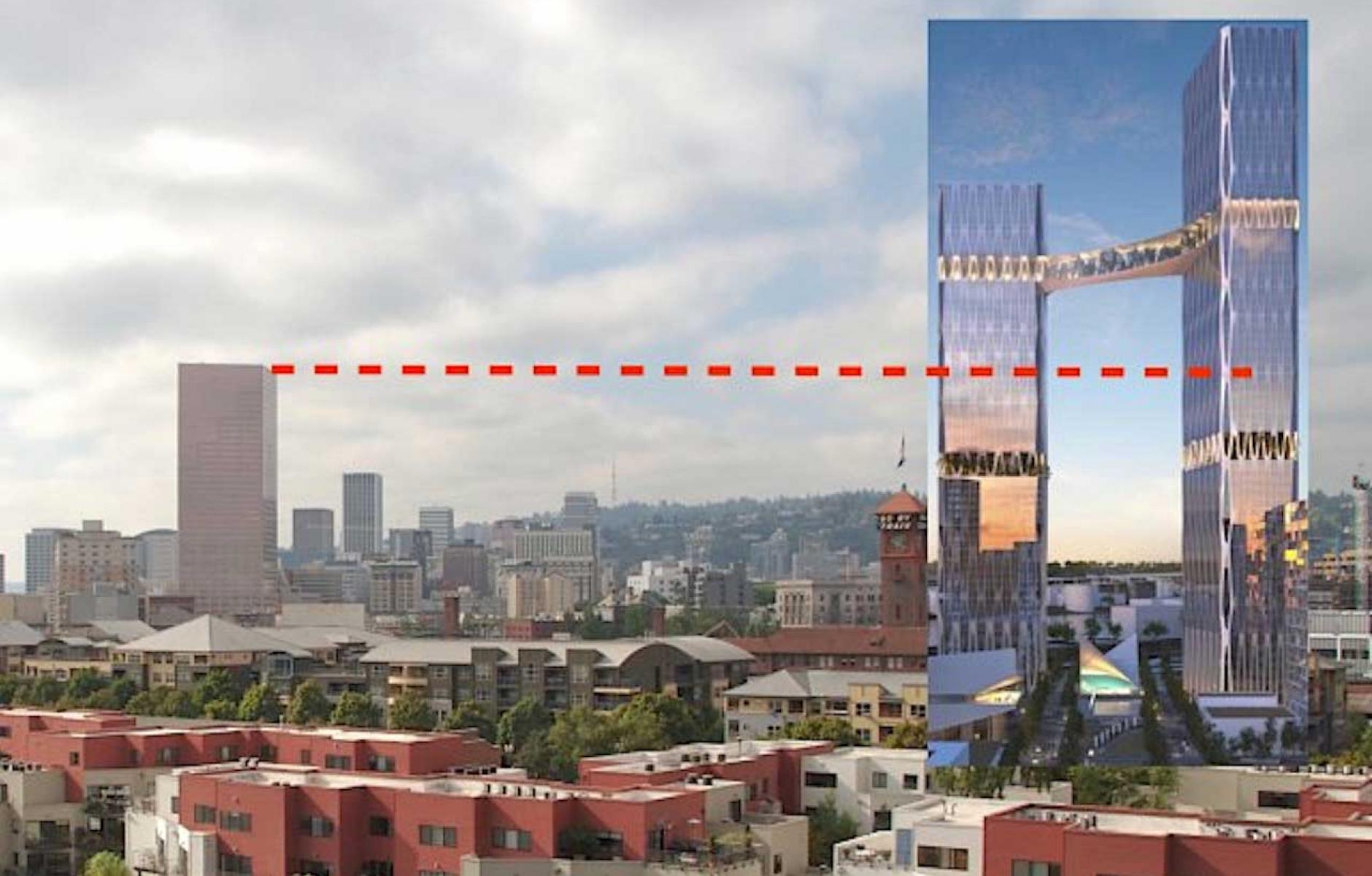 Rob Steuteville and I agree on many things, and in a recent post of his, I agreed with most of it – up to the last paragraph.

“Although the new towers—linked by a 670-foot-high bridge with a botanical garden—would remake the Portland’s skyline, the towers have similar width and depth to other Pearl District buildings. They seem to fit in a way that many new skyscrapers in other cities do not.”

He neglected to mention that the towers are proposed to be almost 1,000 feet tall – dwarfing the existing tallest building, the US Bancorp Tower, at 536 feet. That building, already out of scale for the mostly low-rise (but dense) core of the Rose City, is some 144 feet lower than the skybridge between the two proposed towers.

Prior to that passage, Rob took pains to speak of the urban design plan, and on that we agree. (I must note however that this feature is not unique to the proposal he mentions.) Portland’s small blocks are famously walkable, as Jane Jacobs noted, and it’s a good thing to extend this grid into a former modernist “superblock” area.

On the other hand, at 200’ x 200’, Portland blocks might be a little too small to accommodate proper setbacks – especially the kinds of setbacks that allow a proper podium or “plinth” that a taller mass can step back from. The sad result of this can be seen at the same US Bancorp Tower – a hulking mass that looms over the street, deadening everything on the street below, especially on its north side.

If Rob were to come to Portland, I could show him examples of taller buildings that step back from the street and are therefore more successful – and I could show lamentable examples of some that do not, and that create dark, unpleasant public spaces on the street.

But maybe we need to re-think the basic soundness of these tall buildings and their rationale in the first place. After all, they clearly aren’t required for density (Paris anyone?), urbanistically they function as “vertical gated communities,” and they only fuel the cost of housing, by offering expensive-to build spaces with expensive views.  (Unless you’re buried in the “affordable ghettoes” in the bowels.)

And the idea that “what happens above the 4th floor doesn’t matter” is, of course, unsound – there are profound impacts on the street and the public realm, the skyview, and the imageability of the city.

At 960 feet, this new building would be the tallest in the Pacific Northwest – taller than any in Seattle or Vancouver. And that seems to be the point. Don’t we grow tired of this “mine’s taller” little boy game? I was just in Kuala Lumpur, where they once had the tallest buildings in the world, the Petronas Towers. Now those towers rank as a puny Number 15, and will soon be lower on the list, as a raft of new “mine’s taller” projects comes on line. All these cities are degraded by this “race to the sky” – but it is an alluring and profitable siren song.

Imagine if, instead of a race to build destructive ever-taller towers, architects and developers raced to build the most beautiful, human-scaled, lovable places – buildings and public spaces that were worthy of our history and our humanity?