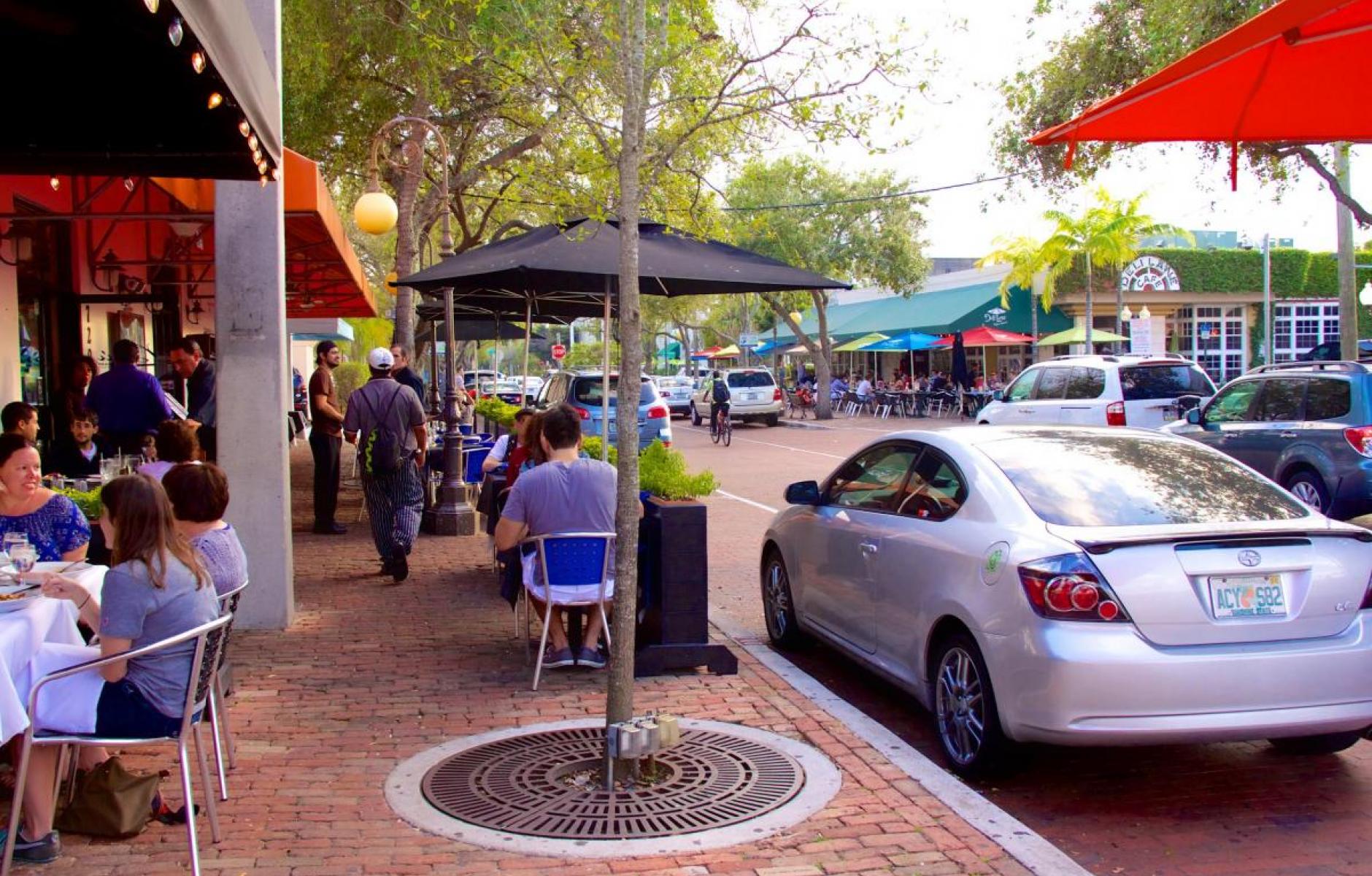 The heart of South Miami—an early suburb built from the 1930s to the 1960s—had a car-oriented character 25 years ago. A change in design was made to create a main street ambience where pedestrians feel comfortable and to kickstart implementation of a long-term vision for the area.

South Miami’s center, including the main street Sunset Drive and the two-block commercial street Dorn Avenue, languished for decades before getting a commuter rail station in 1984. Revitalization of the town center area, now called Hometown, began in earnest about 2000—following a street redesign completed in 1998.

Sunset and Dorn are perpendicular to each other—the streets intersect less than 100 feet from US 1/Dixie Highway, where South Miami’s Metrorail station is located.

The streets had been designed primarily for motor vehicles and did not support the desired context of a mixed-use, walkable center. In a subtropical climate, there was no shade. Cobra lights hung over the street. The sidewalks were narrow, leaving no room for café tables—if anyone had wanted to linger there. On the plus side, many of the buildings faced the sidewalks in main street fashion— although some buildings had been torn down for surface parking, leaving gaps in the urban fabric.

The Sunset and Dorn makeover was designed to show how the area could transform to a more walkable environment. The street redesign was made in conjunction with zoning and planning changes to promote street-oriented architecture, a mix of uses, and shared parking in public garages and along the street.

Bulbouts further reduce crossing distances. Concrete sidewalks and asphalt roadways were converted to brick, which creates a slight rumble that tends to calm traffic, on Dorn. Aesthetically, the brick generates a warmer, more inviting tone to the streetscape. Street trees were lacking on both thoroughfares, but now they arch over the sidewalk and street, narrowing the perceived width of the roadway and providing shade for café tables, which didn’t exist prior to the redesign.

New buildings come up to the sidewalks and have doors, windows, and business entrances. The narrow, brick, tree-lined Dorn Avenue is notable for being the only street of its kind in South Miami and one of the few in South Florida, according to Dover, Kohl & Partners, the firm that designed the new streetscapes.

The street changes resulted from a 1992 community planning process where residents repeatedly told practitioners “we want our main street back,” according to Dover Kohl. Dorn Avenue was chosen as the first demonstration project for what was called the Hometown Plan, a vision plan covering 55 acres at the heart of the community, near the recently built transit station. After Dorn Avenue was successfully rebuilt, the reconstruction of Sunset Drive followed. The overall plan was geared toward reviving and enhancing a mixed-use walkable downtown for a suburb. Street redesign was needed to complete that vision. The area is now called South Miami’s Hometown.

The street transformation cost $1 million for Sunset Drive, paid for by developer impact fees from construction of a shopping mall, and $200,000 for Dorn Avenue, paid for by the city and private donations.

The result has been transformative for South Miami, according to Mayor Philip Stoddard. “We in South Miami embraced the gracious planning and design of our Hometown District, and we want to continue farther on this path,” he says.

Total long-term redevelopment and investment in the Hometown area is estimated at $1 billion, including a multistory shopping mall, The Shops at Sunset Place, which takes up a large urban block and has stores fronting the street. South Miami, a place where people drove through on their way to Miami or Coral Gables, is now a regional destination.

Safety on the roadway is improved, particularly the intersection of Red Road and Sunset Drive, which had frequent crashes. In 1991 and 1992, as the Hometown Plan was created, three injury crashes that included pedestrians were reported at that intersection. From 2004 to 2013, the intersection had no crashes reported with pedestrians or bicyclists, according to the National Highway Traffic Safety Administration.

Even with the reduction in lanes, the volume of traffic on the thoroughfare has risen. Level of service on Sunset Drive has dropped from a D in 1986 to an F in 2015, according to Florida DOT.

The municipality had dropped in population in the 1970s and 1980s, but began to turn around with the Hometown Plan. Growth has been strong since 2000.

A new streetscape can be the impetus for a broad revitalization of a district, changing the public perception of an area and bringing in visitors from other parts of the region. A community may fully realize the potential of a traffic-calming street redesign with the help of an overall vision plan and zoning changes. In the case of South Miami, all of these elements combined to create a more complete community with stronger retail, better transportation, and more residents and employment.