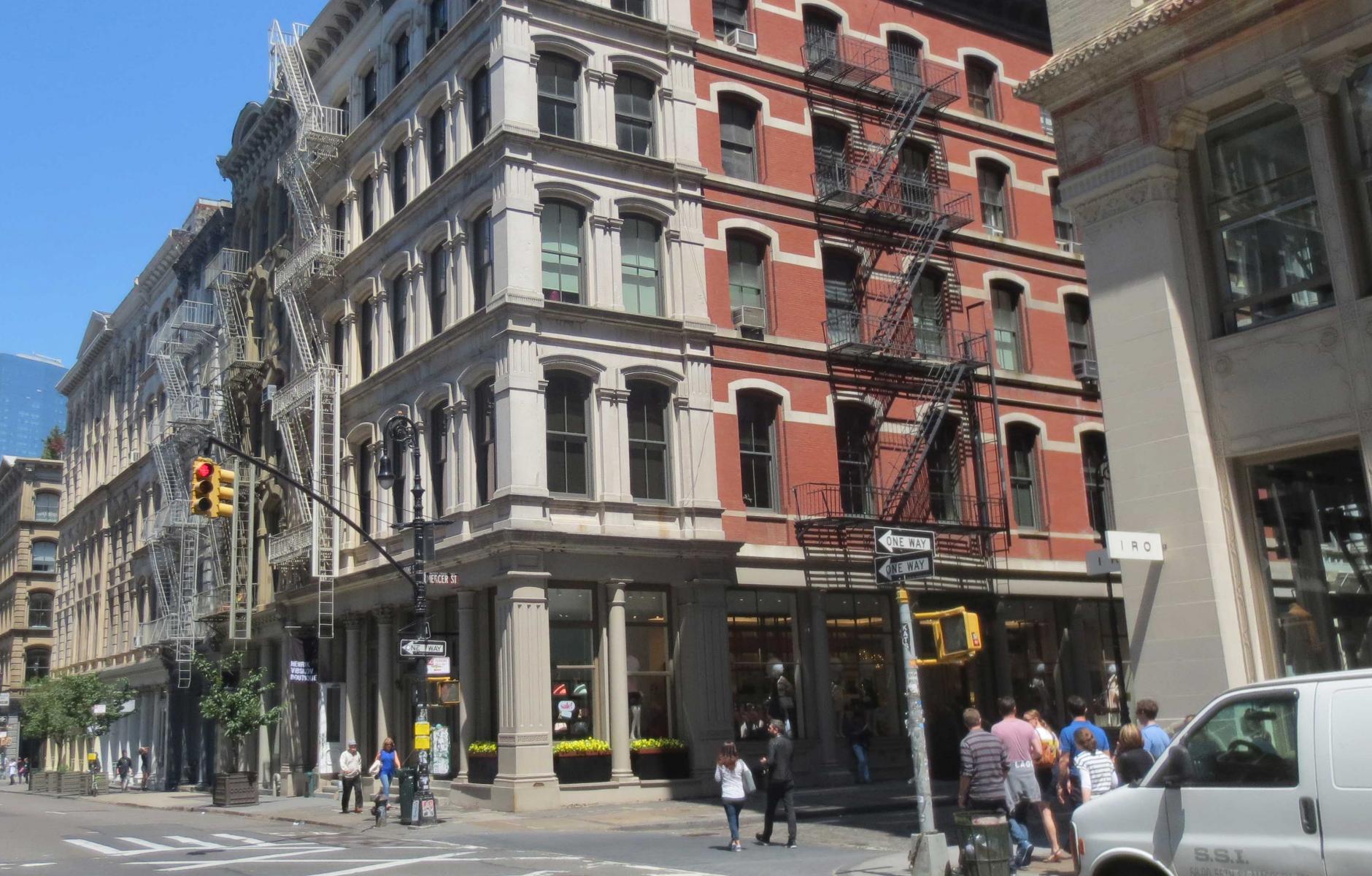 Buildings on Broome St., on the path of the Lower Manhattan Expressway, would have been torn down as "slum." Photo by Charles Siegel
Equity

The progressive roots of New Urbanism

The movement against urban freeways and slum clearance during the 1960s and 1970s was primarily negative. It opposed modernist projects that threatened existing neighborhoods. With a few exceptions, it did not develop new methods of urban design to replace modernism.

Modernist urbanism was centered on new technology: cities were designed around high-speed roads for automobiles and around large-scale superblocks planned by experts. Modernists designed what Clarence Perry aptly called “housing for the machine age.”

New Urbanism centers on creating good places for people. The New Urbanism rejects the modernist idea that cities should be made up of single-use superblocks with interior streets for local access and surrounding arterial streets for through traffic. Instead, it creates continuous street systems with small blocks, with development oriented toward the street and sidewalk, and with a variety of different land uses within walking distance of each other. This sort of design works for both pedestrians and automobiles, while modernist design does not work for pedestrians.

New Urbanists developed form-based codes as an alternative to conventional zoning. Zoning laws are typically proscriptive, telling developers what they cannot do, while form-based codes are more prescriptive, telling developers what they should do. These codes have guidelines to define the building types allowed on shopping streets, streets of single-family houses, streets of row houses, and so on. In addition to these urban codes, which control the massing and location of buildings, many New Urbanist developments also have architectural codes, which specify materials that may be used, the roof overhangs that are required, and other design elements that give the entire development a consistent architectural style.1 These architectural codes generate the consistency with variation that is typical of traditional design, but the styles can seem artificial when they are imposed from the outside in this way—different from old cities and towns that have a consistent style because they had a coherent culture.

The most famous New Urbanist developments are suburbs that are designed like the American towns or suburbs of a century ago. Among the first to attract widespread attention in the 1980s were Andres Duany’s Seaside (1981) and Kentlands (1988). These developments are striking illustrations of New Urbanist principles, because it is possible to build entire neighborhoods from the ground up in the suburbs.

Because these examples are so well known, there is a popular misconception that New Urbanism is just a method of designing suburbs differently. Actually, it is a traditional approach to the design of urban neighborhoods and small towns as well as suburbs.

The New Urbanists use the same principles of traditional urban design in urban neighborhoods as they use in suburbs. They reject the modernists’ idea that we should build single-use superblocks surrounded by arterial streets. Instead, they build an old-fashioned continuous street grid with small blocks. They orient development to the sidewalk, to encourage people to walk among different uses. They hide parking behind buildings or they structure parking into buildings to create pedestrian-friendly façades facing the sidewalk.

Criticism of suburban sprawl was a part of the broader revulsion against modernist urbanism that began in the 1950s and 1960s, but it was much harder to stop freeways and subdivisions in sparsely populated locations than it was to organize local citizens against freeways and housing projects in densely populated locations, where they were a direct threat to many people. The movement against sprawl had its first major success in Portland, Oregon, when citizens opposing a new freeway called in a New Urbanist planner to do an alternative design for the entire region, which ultimately led the region to develop a new sort of regional plan.

Battle over the Western Bypass

In 1973, Oregon passed a law requiring all of its cities and towns to create Urban Growth Boundary (UGB) lines: cities had to project how much land would be needed for future development, draw a line that could contain all that development, and forbid new development beyond the line. In 1979, the Portland metropolitan area adopted a final UGB and also established a regional governing body named Metro.

The UGB was meant to protect open space, so the state law said nothing about how cities within the boundary should be designed. When the Oregon Department of Transportation (ODOT) proposed a freeway named the Western Bypass in the county where the region’s most rapidly growing suburbs were located, Metro included the highway in its Regional Transportation Plan, though it would clearly promote more sprawl and auto-dependency.

An environmental group named 1000 Friends of Oregon opposed this freeway, and in 1988 it commissioned the New Urbanist planner, Peter Calthorpe, to develop an alternative plan, which was called “Making the Land Use, Transportation, Air Quality Connection”—or LUTRAQ for short. This plan accommodated population growth by providing new light-rail and bus service with Transit Oriented Development (TOD) clustered around the transit stations. It developed a computer model to measure how many trips TOD could shift from automobiles to alternative modes, which later led Metro to develop a similar model named the Urban Index.

At the same time that the battle over the Western Bypass was being fought, Metro was also reviewing the UGB and developing what they called the Region 2040 Plan to accommodate projected growth during the coming decades. After extensive planning and public input, Metro ultimately adopted a plan for the entire region that was similar to LUTRAC. The 2040 Functional Plan adopted in 1996 added new light-rail, high-capacity bus lines, and feeder bus lines, and it concentrated new development around transit stops.2 The plan also required at least eight street intersections per mile in new and redeveloping areas, requiring the small blocks that make neighborhoods walkable.

This planning made Portland a national model for smart growth. It encouraged the development of walkable suburbs, such as Orenco Station (1997), built around a stop on the Westside Light Rail line at the edge of the Portland metropolitan area. This planning also encouraged massive development of housing in the central parts of the city. For example, the Pearl District, just north of downtown, had been occupied by warehouses and rail yards, and it is now filled with new condominiums and with residential lofts in the old warehouses and is known for its art galleries and shopping.

Many other areas adopted policies to encourage smart growth. In 2008, for example, California passed the law SB 375, requiring metropolitan regions to plan for smart growth as part of the state’s effort to reduce its greenhouse gas emissions.

Modernist urbanism began as part of the progressive movement of a century ago. In the early twentieth century, when most people were near the poverty level, its faith in technology seemed justified as a way of lifting people out of poverty by promoting economic growth.

By the 1960s, most Americans no longer were near the poverty level. Rather than seeming progressive, the freeways and sprawl became symbols of failure. The official goal of national economic planning was to promote rapid growth of the gross national product, but many progressives began to suspect that promoting the most rapid possible growth was not as important as promoting a higher quality of life.

Protests against freeways and housing projects were among many radical political movements of the 1960s, and they used the radical tactics that were typical of the time. Jane Jacobs herself was arrested in 1967, along with Dr. Benjamin Spock, Alan Ginsberg, and about 260 others, in an anti-Vietnam-war demonstration where protestors locked arms to block the entrance to the Whitehall St. induction center.

Jacobs was also arrested in 1968 for disrupting a public hearing about Robert Moses’ Lower Manhattan Expressway (LOMEX). The meeting was disrupted several times by hundreds of protesters in the audience, who shouted and stamped their feet. After about two hours, it was Jacobs’ turn to speak, and she said the placement of the speaker’s podium facing away from the hearing officers who would make the decision, was a sign that the officers were ignoring the public. She called on the audience to follow her as she walked up on the stage where the hearing officers were sitting. As she walked across the stage with about fifty people following her, the chairman began yelling, “Officer, arrest this woman.” In the confusion, the stenographer dropped the stenotype paper she was using to record the testimony, and the audience began picking up pieces of stenotype paper, tearing them up, and throwing them into the air. Jacobs went back to the microphone and announced, “Listen to this! There is no record! There is no hearing! We are through with this phony, fink hearing.”3 Jacobs was charged with disorderly conduct and later with criminal mischief, inciting to riot, and disrupting government administration. After long delays, Jacobs pled guilty in a plea bargain, expecting to get fourteen days in jail, but instead was given a suspended sentence and ordered to pay for the damage to the stenography machine. But the disrupted meeting created such bad publicity for the project that Mayor Lindsay said in 1969 that LOMEX was “dead for all time.”4

The New Urbanists are less rowdy, but their support of traditional urbanism over modernist urbanism is also a real challenge to our technological society. In mid-century, the freeways and sprawl suburbs were touted as examples of how economic growth would bring us a better life. The New Urbanists have shown that it is better to live in walkable neighborhoods than in these auto-dependent suburbs, implying that we should abandon our narrow focus on maximizing the rate of economic growth and instead focus on improving the quality of life.

There has been a shift in what we mean by “progressive.” In the early twentieth century, modernist architects and urbanists were part of a larger progressive political movement that believed technology and economic growth would bring a better future to the masses. Today, environmentalism is an important part of the larger progressive political movement, which believes that we should use technology selectively, controlling harmful technologies such as urban freeways, tar sands pipelines, and coal-fired power plants. The anti-freeway and anti-slum clearance movements of the 1960s and the New Urbanism that followed have been an integral part of the progressive politics of our time, and they have helped shift progressives from the technophilia of the 1950s toward the more sensible view that we should use technology for human purposes.

This article is an excerpt from Chapter 3 of The Humanists Versus the Reactionary Avant Garde: Clashing Visions for Today’s Architecture, by Charles Siegel, published by Omo Press, 2016.

2 The plan gives localities some flexibility in how to design transit-oriented development. Towns had the option of adopting the plans standard zoning or meeting the plan’s targets for housing and job growth.

4 Lindsey quotation from Flint, Wrestling With Moses. P. 177. The account of the hearing is based on Flint and on Jane Jacobs own account of the arrest in Roberta Brandes Gratz, The Battle for Gotham.