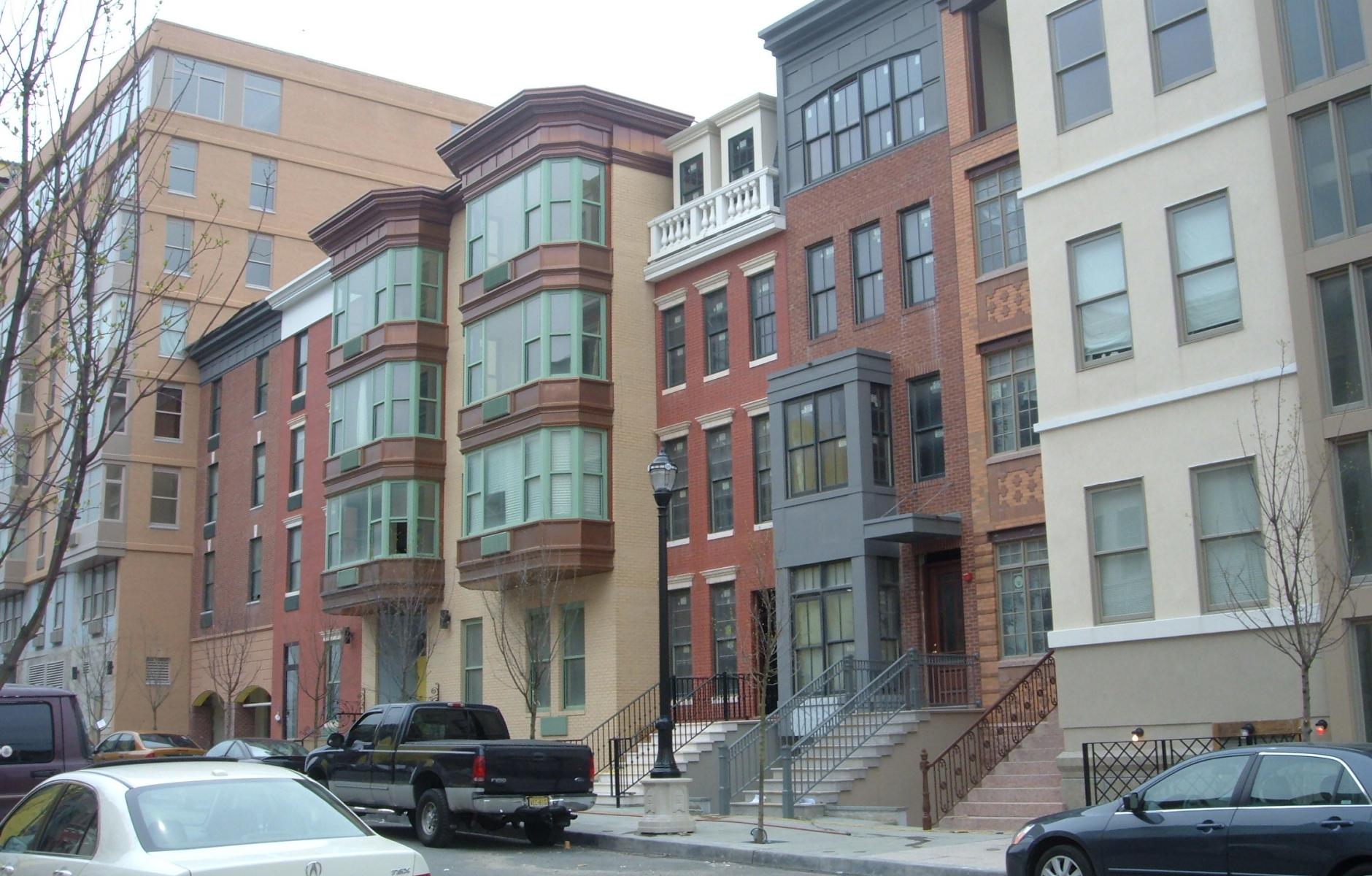 Architecture that learns from earlier styles is sometimes criticized by modernists as “nostalgic.” This label and other catch phrases get in the way of developing architecture that responds to the real needs of our time.

For example, New Urbanists have designed neighborhoods laid out like the old streetcar suburbs because they think it is better to live where you can walk to shopping and other services, rather than living in a sprawl suburb where you have to drive every time you leave home. But New Urbanist developments also use up-to-date heating, air-conditioning, and kitchen equipment, unlike the original streetcar suburbs, which used coal for cooking and heating and had no air conditioning.

They are not nostalgic for the days when the streetcar suburbs were built, when coal was the main fuel and when women did not have the right to vote. But they do see that we can learn some things from those days, if we think about them in enough detail to avoid what was bad but learn from what was good about them.

They forget that the original Disneyland included “Tomorrowland” as well as “Main Street, USA.”

The modernists chortled when Disney Corporation built Celebration, Florida—a New Urbanist town built by our most famous theme park-developer. But a few years later, we also got Walt Disney Concert Hall in downtown Los Angeles, a Frank Gehry building that looks like a shiny avant-gardist sculpture.

Which of these two is more like a theme park? By definition, a theme park is built to lure tourists with experiences that they cannot get elsewhere. Gehry, the designer of the Guggenheim Museum in Bilbao, is famous for his ability to draw tourists. And many other avant gardists are trying to imitate him.

As another common catch phrase, avant gardists claim that only modernist architecture is “of our time.”

The modernism of the early and mid-twentieth century really was of its time. This architecture was appropriate to a scarcity economy that needed new technology to bring prosperity. It was the appropriate architecture for a culture that wanted to throw away any limits to progress and to build its way out of every problem.

Since the 1970s, though, there has been a change in sensibility as our culture has moved beyond this sort of technophilia.

This change in sensibility has occurred in our attitude toward food. Imagine people saying that they eat mass produced white bread and McDonalds hamburgers because they are “of our time,” while artisanal bread and food made from locally grown ingredients are just examples of “nostalgia” about how food used to be made. Everyone would see that they are wrong to think that we should decide what to eat based on which foods are modern, rather than on which foods are the healthy and tasty. And everyone would see that they are even more wrong to think this modernist approach to food is “of our time”: It actually was common during the mid-twentieth century, but we have moved beyond it since the 1960s and 1970s.

This change of sensibility has occurred in city planning. Imagine people saying that they support building new freeways that slice through urban neighborhoods, because freeways are the transportation “of our time,” while people who want walkable neighborhoods are just “nostalgic” for the way people used to get around. Everyone would see that they were wrong to decide what sort of cities to live in based on what is modern, rather than on what sort of neighborhood is most livable, convenient, healthy, and sustainable. And everyone would see that they were even more wrong to think that this modernist approach is “of our time”: it actually was common during the mid-twentieth century, but we have moved beyond it since the 1960s and 1970s.

This change of sensibility has happened across the culture, but the architectural establishment has missed it.

To make our architecture relevant to the key political questions of our time, we need to reject this idea. In today’s technological society, the modernists support the status quo while the humanists are working for social change.

The avant-garde style began around the time of World War I, became generally accepted during mid-century, and has become the establishment style today—which is why it is now “avant gardist” rather than genuinely avant garde.

A century ago, its gestures seemed radical because they rejected the traditional society that dominated Europe and the United States. At that time, it made some sense to believe that radicalism involved a total break with the past.

During the 1950s, modernism still had some of its early radical spirit. It was not only on the leading edge esthetically but also on the leading edge of progressive social reform. The freeways and the high-rise housing projects were still part of the progressive project of getting the masses out of the slums by providing suburban housing for the middle class and sanitary public housing for the poor. Glass-steel-and-concrete modernism was still an exciting break with the past, symbolizing the rejection of oppressive traditions.

During the 1960s, modernism became common enough that everyone saw it was failing. Modernist housing projects became vertical slums that were worse than the old slums they replaced. Freeways spread sprawl and blighted older neighborhoods. There were citizens’ revolts against both of these modernist impositions on existing neighborhoods—and these movements represented a new direction for progressive politics.

During the 1970s, it became clear that modernism was now the status quo, and it was oppressive. The glass and steel office buildings towering over the old downtowns of our cities, and the high-rise housing projects towering over the old slums, looked cold and impersonal—like the centralized economy that produced them. Social critics said that we live in a technological society, where ordinary people are powerless. Environmentalists created a political movement dedicated to controlling destructive technologies.

In the 1970s, mid-century modernism was exhausted. The modernists’ glass, steel, and concrete boxes, which had seemed so striking in the 1950s, were now anything but new and different. Serious postmodernists began to develop more humanistic architecture, while other architects searched for fresh novelties that could still shock and surprise people—beginning with the ironic side of postmodernism and leading to today’s avant-gardism.

Modernism changed from a radical movement to the status quo because our society changed. The modernists criticized the traditional society of the early twentieth century in the name of technology and progress. But they have no critical insight into the new problems of today’s technological society.

Unlike the avant gardists, the New Urbanists are part of a powerful movement to reform society. Environmental groups across America support New Urbanism and smart growth in order to fight suburban sprawl, to conserve energy, and to slow global warming. When environmentalists in Portland wanted to stop the Western Bypass freeway, they got the New Urbanist planner, Peter Calthorpe, to draft a regional plan based on transit-oriented development, and they got other New Urbanists to design transit-oriented suburbs, such as Orenco Station.

The New Urbanists use models from the past, building developments that are like the railroad suburbs, streetcar suburbs, and urban neighborhoods of a century ago—and this is a real challenge to the modern economy, because it implies that Americans would be better off living more simply. Suburbia and freeways were mainstays of postwar American consumerism, and the New Urbanists are saying that we would be better off if we lived in homes that use less land and in neighborhoods where we have the choice of walking rather than being auto-dependent.

Environmentalists support New Urbanist design because it preserves open space and reduces energy consumption. The people who move to New Urbanist neighborhoods like them because they let you avoid the tension of driving in congested traffic on high-speed roads and because they have a stronger sense of community than sprawl suburbs.

One young architecture student, angry to hear me support traditional styles, asked, “Would you design a computer to look like a quill pen?” Without realizing it, he raised an important point about choice of technology, and he revealed that architecture school indoctrinated him to ignore this point.

In some cases, new technologies clearly are better than old ones. No one wants to write with a quill pen rather than a computer. In these cases, it would obviously be dishonest to design the new technology to look like the old one.

In other cases, today’s products use the same technologies as old ones. A new mirror, towel, or chest of drawers does not work differently from one made centuries ago. In these cases, it would be dishonest to design the old technology to look like something new—for example, to make it a chest of drawers that looks like a modernist sculpture.

In many cases, the most interesting ones, we need to make a choice of technology. Is it better to eat mass produced white bread or artisanal bread? To build freeways or walkable street grids in cities? To use chemical-intensive farming or organic farming? To use nuclear power or solar power? Often, the best option is somewhere between the two extremes: for example, we should move to use fewer chemicals in agriculture by using natural methods of controlling pests and weeds, but it is not realistic to shift to organic farming completely, because yield per acre is about 25% less without artificial nitrogen fertilizer. Sometimes, the old-fashioned way is clearly better: bread made with stone-ground whole wheat flour is healthier than bread made with chlorine-bleached white flour. Sometimes the new way is clearly better: using an automatic dishwasher is much easier than washing your dishes by hand.

In the 1950s, people thought the modern method had to be better. Today, most people can see that the newest technology is not always the best. I am sure this architecture student would not insist on eating chemical food and say that eating organic food is like using like a computer designed to look like quill pen. I doubt if he would insist on building urban freeways and say that traditional street grids were like computers designed to look like quill pens. But he has been so indoctrinated in architectural modernism that he did insist on designing buildings in the modernist style for this strange reason.

To move forward, we must recognize that the emperors of today’s architecture have no clothes.

What turns out to be “of our time” during the twenty-first century depends on the decisions we make about how we want to live.

Avant-gardist architecture is of our time in the sense that it represents the worst trends of our time. It represents a society devoted to sensationalism and novelty, where the media rush to cover anything that is new and different, marveling at how “cutting edge” the avant gardists’ buildings are and never bothering to ask whether they are good places for people.

By contrast, humanistic architecture is of our time in the sense that it is contributing to a central task of our time, the task of making good human use of the possibilities that our technological society offers. If the humanists set the tone of our architecture and urbanism, then people will look back at the twenty-first century as the time when we learned how to use modern technology to design buildings and neighborhoods that are good places for people to live.

This article is an excerpt from Chapter 9 of The Humanists Versus the Reactionary Avant Garde: Clashing Visions for Today’s Architecture, by Charles Siegel, published by Omo Press, 2016.