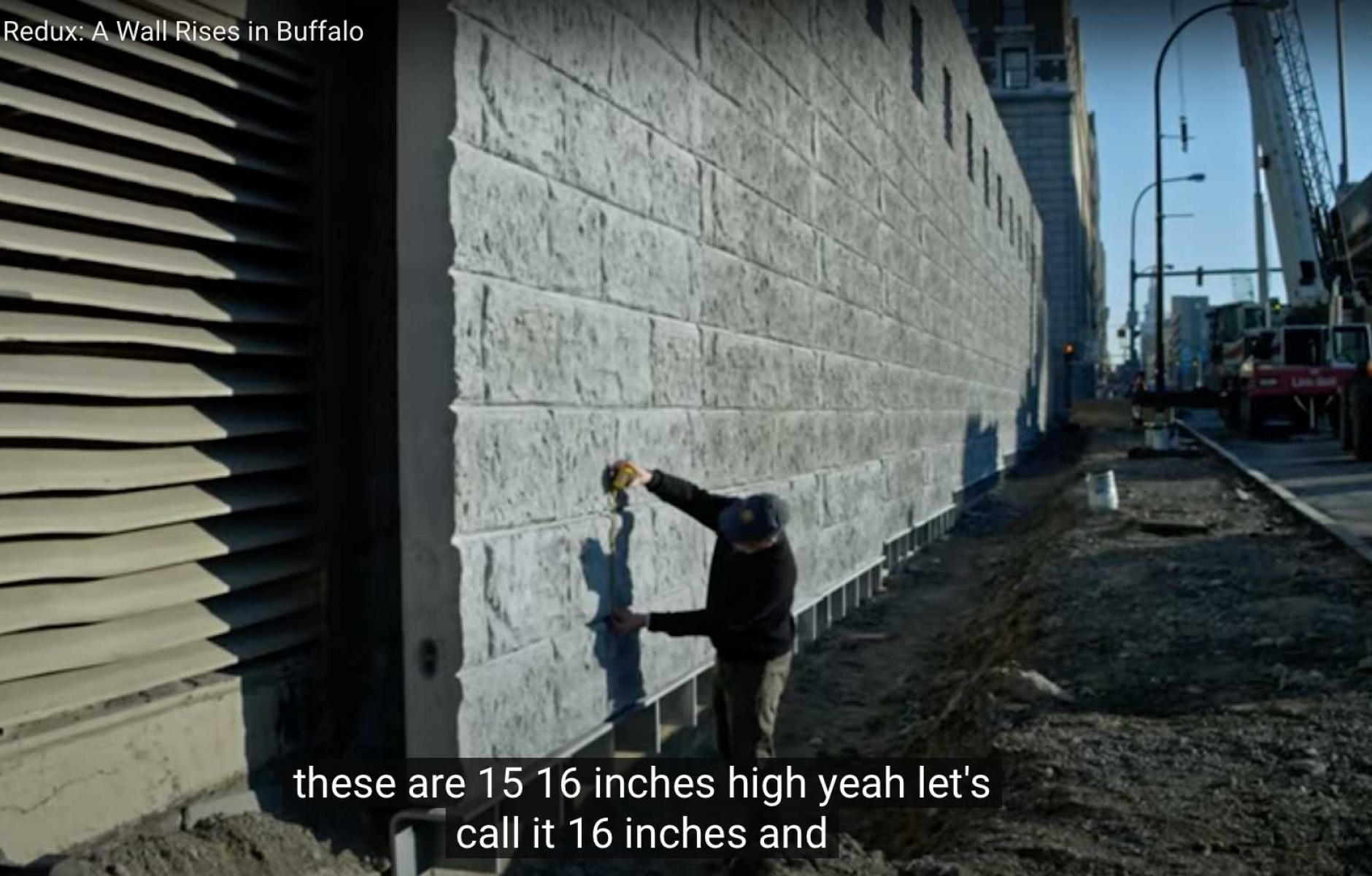 A wall rises in Buffalo

Even a city that is getting better makes mistakes, such as a massive concrete wall around a development in a city where population and urbanism are growing.
ROBERT STEUTEVILLE   &nbspJAN. 23, 2023

In early March, 2020, days before the entire nation came to a sudden pandemic halt, I was in Buffalo, New York, for a charrette co-sponsored by CNU. It was brutally cold—as Buffalo can be in winter—and that may have contributed to my poor judgment (it’s hard to think clearly about urbanism when wind chills are negative 20).

The event took place on the second story of Seneca One tower, a then-vacant 1972 brutalist office building under renovation as 1.2 million square feet of mixed-use space. The charrette focused on the future of downtown, not Seneca One specifically—and yet I found drawings on display of the renewed edifice entrancing.

I wrote about the tallest structure Western New York State being refilled with tenants and 1,500 jobs, and how the project is part of Buffalo’s rebirth. That story remains true. Yet I recently returned to Buffalo for a few days and saw firsthand a new anti-urban wall that largely surrounds this complex, and knew that I missed something important.

As long-time Buffalo urbanism critic Tim Tielman reports in this depressing yet hilarious video below (posted while the now-finished wall was under construction), the sidewalk-facing wall ranges from a dozen to 20 feet high, and could repel an invading army (a point punctuated with a Monty Python clip).

I recommend watching the entire 10-minute video, because Tielman, the director of the Campaign for Greater Buffalo, is entertaining and educational. Tielman has been advocating for urbanism and historic preservation in Buffalo since the 1980s. As Bill Kauffman writes in a profile: “He was, at first, a gadfly—‘the urban design book-pusher of Buffalo,’ … protesting the seemingly limitless ways by which developers and politicians proposed to ‘improve’ Buffalo by maiming, molesting, or extirpating the common inheritance.” Over the years, he earned respect as a voice to preserve the city’s architectural treasures. Yet as the video shows, Tielman is still good at the gadfly role.

As he sarcastically suggests, “Yeah, let’s build a 12-foot high, pseudo-rusticated wall, and that would be a great thing for the city. That’s the time when you want the planning department to say, ‘hang on, what’s that going to do for the property owner across the street, or what’s that going to do to help connect the waterfront to downtown via Pearl Street?’ We need street-level activity. That’s urbanism 101.”

The video is instructive on basic urbanism concepts, such as the problems with blank walls, and why entrances on the street and clear glass windows are important. Buffalo blew this opportunity even as New York State plans to take down damaging infrastructure and restore traditional urbanism in the city. “The state, at the end of the day, is going to spend hundreds of millions of dollars to recreate a historic street network, to eliminate The Skyway and a lot of the highway interchange blight that we are in right now, and we are looking to build buildings in a new urbanist way, and suddenly we are faced literally with a concrete wall,” Tielman complains.

Ultimately, the rebirth of a city such as Buffalo is a complicated story that includes steps forward and backward. Buffalo is growing again, in positive ways, with the help of a 2017 form-based code. Unlike in the era of urban renewal, the urban form of the city is mostly improving today. Seneca One is part of that rebirth, at least economically, and the wall around it is an unfortunate exception to a public realm that is getting better.

With this article, I am correcting an oversight of mine from nearly three years ago, and drawing attention to some feisty commentary, the likes of which we could use more of. Maybe as a result, fewer such walls will be built in cities across the land. And perhaps someday, one can hope, Buffalo will tear that wall down.