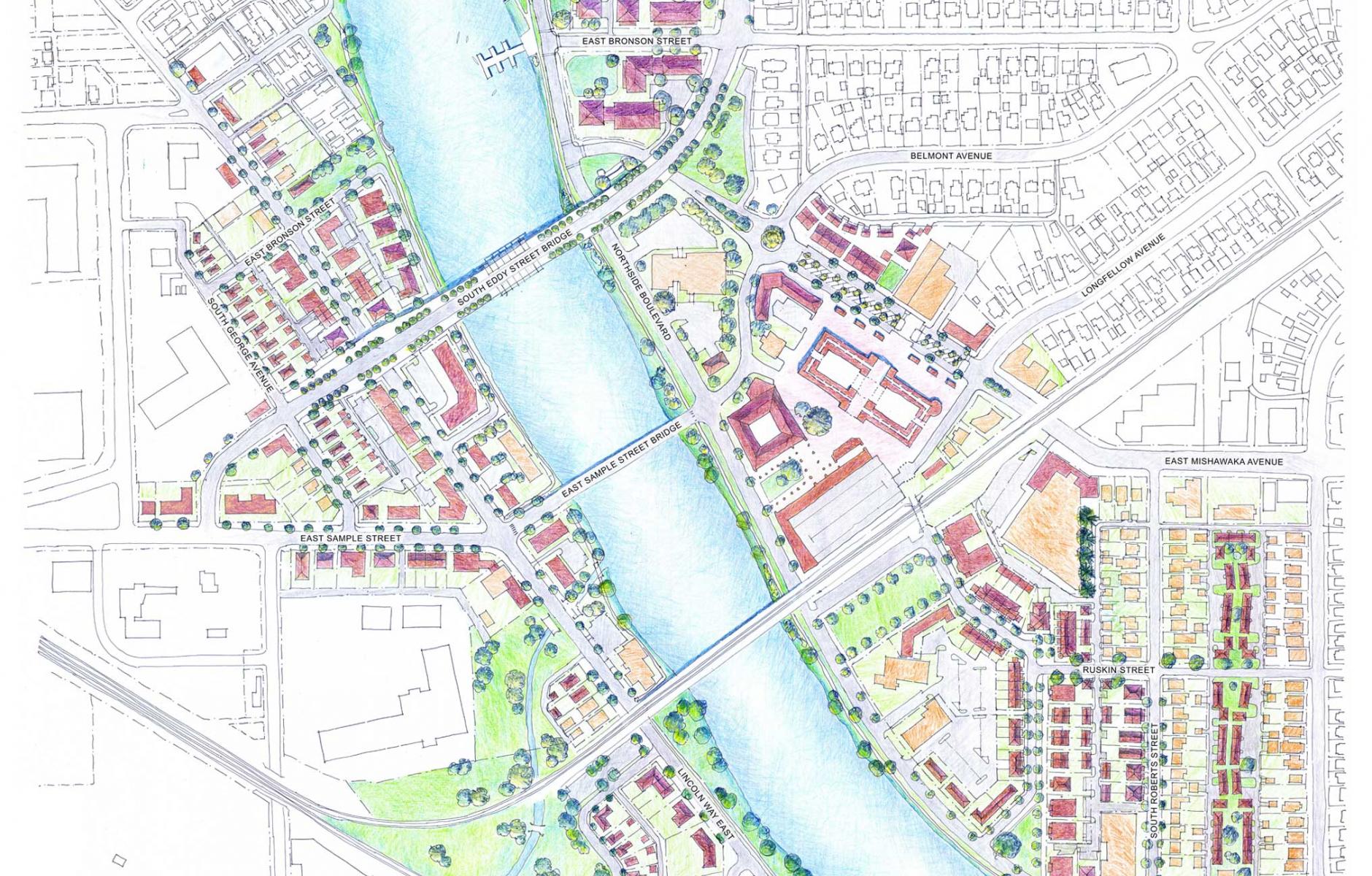 In the City of South Bend, getting rid of absurdly failed highway infrastructure may be the key to revitalizing a district. The federal government is betting $2.4 million on it.
ROBERT STEUTEVILLE   &nbspSEP. 8, 2022

In terms of failed urban renewal infrastructure, it would be hard to find a more absurd example than the Eddy Street cloverleafs in the Farmers Market District of South Bend, Indiana.

These ramps on both sides of the St. Joseph River were completed in 1963 to carry traffic to and from a Studebaker automobile plant, which closed, ironically, that same year. They take up large chunks of riverfront real estate, yet function as intersections where the traffic volume could be handled, possibly, by stop signs.

“You hit the gas pedal and get up to freeway speed, and then it’s done. You find yourself back on a city street,” says Marianne Cusato, professor of practice at Notre Dame School of Architecture. Adding to the absurdity are enormous green signs, typical of Interstates, that create an expectation of speed that is quickly dashed.

“It’s like somebody dropped a piece of an Interstate right in the middle of South Bend,” Tim Corcoran, South Bend’s director of planning, told The South Bend Tribune.

A design charrette and report sponsored by the City of South Bend focuses on the cloverleafs and the surrounding Farmers Market District. The work, organized by a Notre Dame team in 2021, met its immediate goal—the city recently garnered a $2.4 million federal grant for planning and engineering study of removal of the four cloverleafs and other access ramps, a substantial and fast return on planning investment.

Ian Lockwood of Toole Design, who participated in the charrette, provided the structural underpinnings for removing the cloverleaf. “Ian was hired by the city to illustrate how a new connected street network could be established to provide the same traffic movements as the existing cloverleaf,” Corcoran told Public Square.

The planning serves a larger purpose. The report envisions the area as a thriving mixed-use district in the city, with almost unlimited upside potential. Urban design is critical to provide a foundation for that transformation. Without it, the potential is much more limited.

The district is an emerging culinary and event area about a mile southeast of downtown, along the river. It contains strong assets—especially a century-old farmers market, an event space, and a popular grocery store, but the existing urban design makes them stand-alone destinations. “Today, both sides of the river are dominated by surface parking lots, aban­doned buildings, and wide roads with speeding traffic,” notes the report. Most of the negatives are the legacy of 1960s urban renewal. The ramps immediately killed retail in the area and imposed large barriers between surrounding neighborhoods, furthering disinvestment.

The report envisions the district as a mixed-use area with missing middle housing, walkable streets, and important public spaces, all connected to the rest of the city. The area is currently so underutilized that 130 acres are available for redevelopment—some immediately, some over time, and some when key infrastructure investments are made.

This plan is part of a new Notre Dame School of Architecture initiative on housing and community regeneration, directed by Cusato. The school is working with South Bend and Kalamazoo, Michigan, and aiming for three professional/academic charrettes a year. The idea came out of discussions between Tim Corcoran, South Bend planning director, and CNU cofounder Stefanos Polyzoides, Dean of Notre Dame’s School of Architecture, Cusato says. Students work side-by-side with professionals on projects designed to have an impact on real community problems. The program puts a unique spin on the charrette idea. Now that the project has funding, the school will continue to work with the city on implementation.

The charrette series has two main goals, “First, to act locally, and sec­ond, to inspire global emulation,” notes the report. The city’s sponsorship brings political will and “skin in the game,” and the ramps themselves are unpopular. “The cloverleafs are universally disliked,” says Cusato. “People have an idea of how much land they take, and it is right on the river.”

Although the ramps spurred the design session, removing them will take years. Yet the federal funding creates momentum and bodes well for the entire project. The charrette also explored a wide range of short- and mid-term revitalization ideas.

“Smaller concepts in this proposal can be implemented quickly, starting with the redesign of E. Mishawaka Avenue, the redevelopment of the YMCA property, and po­tentially the relocation of the Farmers Market,” according to the design team. A new Farmers Market building would require public and private investment.

The existing Farmer’s Market is very popular, but the building is undistinguished. “The current market building is surrounded by surface parking lots, and the structure is in need of updates,” the design team notes. A relocation to face East Mishawaka Avenue is proposed, to better connect the market to the retail core of the district. Designers sought to save existing build­ings when possible, but in some cases the larger vision prevailed. The proposed market is still utilitarian, but with a closer physical connection to other nearby assets. “It’s a beloved place—a hundred years old,” says Cusato. “We would love to see it also engaged with the city.” South Bend could move forward in the near term with purchasing of property and other steps.

Many proposals could be implemented independently of the ramp removal. Missing middle housing mapped out in the plan incorporates an idea that looks brilliant, at least on paper. The district includes a thin strip of vacant land between two alleys that extends for several blocks. The team proposes “infill mews housing” that would front a pedestrian pathway, punctuated by small greens. Inspired by the successful Daybreak Mews in Utah and similar projects, this concept enables intimate, human-scale housing in the district.

The urban renewal damaged the street network. “The goal of the proposed street network is not only to remove the existing free­way-like ramp infrastructure, but also to repair the damage to the surrounding streets caused by the intervention of the ramps,” the report explains. Existing streets, “largely devoid of traffic until occasional cars speed through,” include these characteristics:

“The proposed design addresses these issues by creating a network of narrow, interconnected, multimodal streets that are safe for both cars and pedestrians,” the report explains, noting that the street design determines traffic flow, pedestrian safety, and available parking.

The plan lays out a strategy for improved public space, to be implemented over many years. “This masterplan builds on the existing trail and park system by introducing an open space network that extends along the river and pulls nature into the adjoining neighborhoods.” The riverwalk is regional infrastructure, traversing three cities and two states. All of the cities are engaging and activating their waterfronts. Everywhere these investments have taken place, good things are happening in nearby neighborhoods.

In addition to investment, the team identified where policy changes are needed. The city recently adopted a form-based code, which provides an excellent foundation for this work—with some tweaks suggested by the team. “We propose a revision to the zoning code for this district that sets zones by street and block rather than lot-by-lot. Further, we recommend edits to the definitions of building types to clarify the types permitted in each area,” the team explains.

The $2.4 million federal allocation was one of 166 RAISE (Rebuilding American Infrastructure with Sustainability and Equity) grants, which gave $2.2 billion for infrastructure projects around the US. The City of South Bend, just above 100,000 in population, has slowly begun to grow again, partly as a result of investment downtown, in neighborhoods, and in the public realm. The Farmers Market District has the potential to grow for decades, without displacement of residents, through an urban design centered on human-scale placemaking.