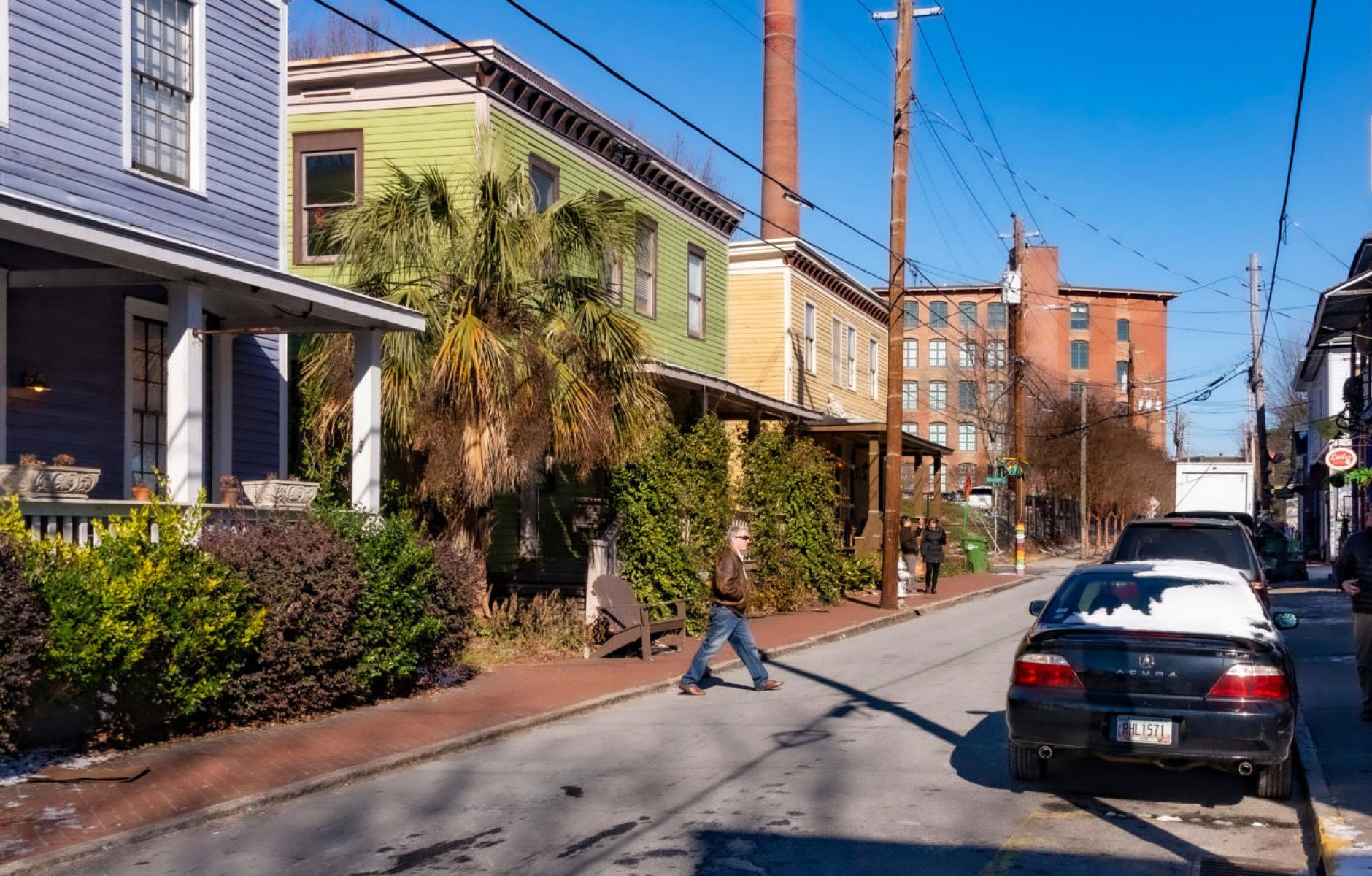 All photos of Cabbagetown, Atlanta, by Steve Mouzon
Incremental and lean

Of the four types of recovery facing America cities and towns—disaster, sprawl, disinvestment, and the recovery of community for those fleeing climate change—the recovery of places from serious disinvestment arguably gets the least amount of press today. But with reasonable effort, it’s the recovery type most likely to bear fruit. This is true for several reasons, beginning with the likelihood that many of the bones of sustainable placemaking are still in place. Newly built places, even if skillfully designed, often face the criticism of “lack of authenticity,” whereas places recovering from disinvestment abound with authentic scars from decades of distress. And places with humble origins were usually built in smaller increments than once-wealthy places, so the tighter rhythms of such places are inherently more interesting than those of grander scale early in recovery.

There are several core reasons places fall from economic stability or never achieve it to begin with. Some are geographic, such as being located on the “wrong side of the tracks,” or on low-lying land along a working riverside. Racial and ethnic enclaves have long been susceptible to unfavorable forces from without that lead to decline. And then there are the primarily economic reasons, one of which is what this article addresses: the all-too-common narrative of the decline of a mill town after the mill shuts down.

Rundown mill villages can be great candidates for revitalization because the mill company probably laid them out compactly and rationally, and with a mix of uses at the heart of the village. And worker housing of the 19th and early 20th centuries tended to be modestly scaled, making it more likely to be endearing for reasons noted later. The mill village of my focus is Atlanta’s Cabbagetown, which had an unusually favorable history. Starting at the closure of the century-old mill in 1977, Cabbagetown had only about a decade of decline before an influx of artists began, so the great majority of the fabric survived, unlike many places with longer periods of decline. The patterns that follow begin with simple rules of thumb meant to aid recovery in ways that are true to the character of the place.

This railroad underpass is the main entrance to Cabbagetown from the north. It is a long industrial tunnel under several railroad tracks with walls chock-full of art. What a perfect entry for a recovering mill village. Such an entry should never be sanitized or rerouted. Authenticity like this cannot be replicated by new construction.

Anyone with an artistic inclination in a neighborhood recovering from disinvestment should be encouraged in their art or craft, even if it is as informal and unconventional as the elements in this image. Messy with heart is far better than clean and calm. Sanitizing is limiting; art, even the simplest folk art, makes many things seem possible—and, in fact, encourages others in their expressions.

Why is it that authentic mill buildings like this one in Cabbagetown are extremely regular in their architecture, while architects trying to achieve the “industrial vibe” let their buildings wiggle all over the site? Most acts of recovery should consist mostly of the repair of existing buildings, but when new builds are required at a scale larger than a single home or shop, it is essential for the architects to have enough humility to build simply, and in a way that is respectful of the fabric that is already there.

Each panel of the mill’s boundary wall is repainted every year by Atlanta artists. For them, it’s advertising for their talents; for Cabbagetown, it’s beautiful and perpetually refreshed civic art. Everyone benefits from such an arrangement.

Badly disinvested places tend to be dull and drab; one of the earliest signs of recovery is color, because paint is cheap. Tactical urbanists have long used color to great effect in the public realm. It works on buildings as well, such as on this storefront’s windows and doors.

A bright pink house and a chain-link fence would never be accepted in a “precious” place, but in a recovering place, they fit right in because people are doing what they can afford in the moment. Yes, the fence will likely be replaced with pickets at some point, but for now this works. And in a place becoming known for artistic latitude, the house might remain pink for decades to come.

Because both the houses and their lots in a mill village tend to be smaller, a recovering mill village has the advantages of both streetscapes and buildings that can be more appealing. Streets with narrow lots change your view more quickly as you walk, boosting walk appeal along the street. Buildings with small faces but relatively larger eyes (windows) are proportionally endearing like the faces of puppies, kittens, and children. Nature hardwires mammals to love their young in part by their facial and bodily proportions; cottages are fortunate to share this proportional hardwiring.

Places recovering from long disinvestment are grandfathered in for door-to-door mail service, unlike newly built places, where the U.S. Postal Service requires cluster mailboxes for delivery efficiency. Mail carriers walking through older neighborhood streets throughout the day when most people are at work are sets of “eyes on the street” that make the place more secure.

The surge of people working from home in the wake of the pandemic are a new source of eyes on the street, making a place recovering from disinvestment more secure not just because residents are working in their homes, but also because they’re likely to walk around the neighborhood during the day to meet their daily needs. While it is still unclear how permanent the current situation will be, and for how many, recovering places with a longstanding mix of uses are far better positioned to be viable work-from-home places than single-use residential subdivisions.

A place should never forget its origin story, no matter how humble. In the case of Cabbagetown, it began as a mill village. It would be a crime against the community to ever take down the mill, or even the smokestack.

I can’t think of a more iconic image of Cabbagetown than the mill house gable in the foreground with the mill chimney in the distance. A gable (and the attic) is an allegory of the mind, and of memory. Keeping the origins of Cabbagetown forever in mind.

This piece was published in Common\Edge