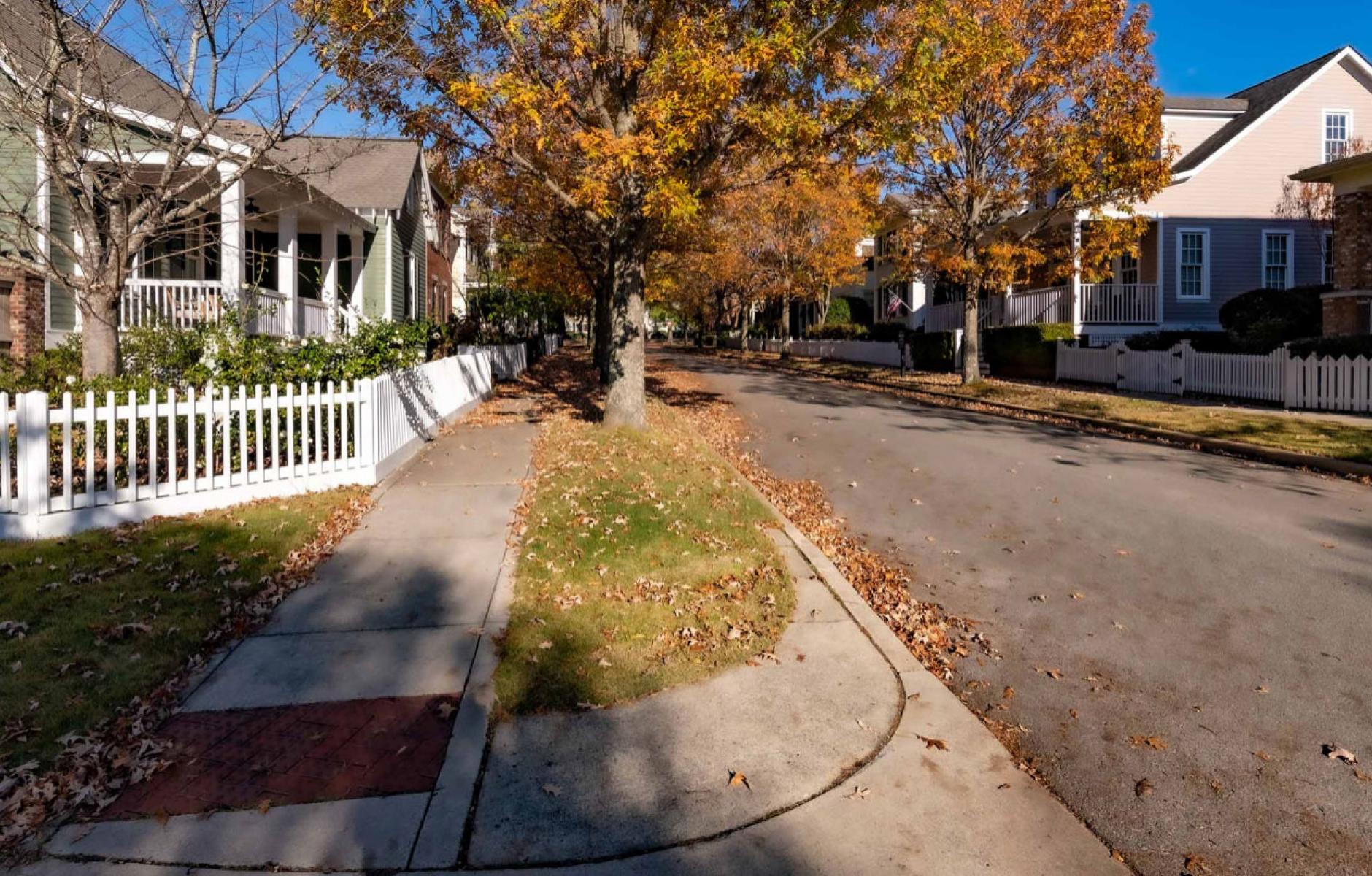 Creating a town center with appealing public spaces and a mix of uses has many advantages over a conventional office park, and that draws employers to the Village of Providence.
STEVE MOUZON   &nbspAPR. 5, 2022

Twenty years ago today, DPZ CoDESIGN came to Huntsville, Alabama to begin design on the Village of Providence, a Traditional Neighborhood Development that shattered several norms and accomplished things that aren't supposed to happen today. There are so many great Providence stories, but let's start with the jobs. Just looking at this street, you'd probably never guess that Providence is an employment powerhouse, but I asked Town Founder David Slyman recently "how many jobs are there here?" He said "we quit counting about three years ago when the number of jobs exceeded two thousand, so today, we have no idea how many people are employed here."

Let that sink in a minute … this is a development entitled for somewhere around seven hundred homes, but it has at least three times as many jobs as homes. New Urbanist places regularly get slammed for being "just prettier sprawl," but the Providence track record resoundingly overturns that misconception.

Employment at Providence begins at home. And the job numbers David gave were from before the pandemic, so they do not include the surge of working from home since March 2020. Some of the homes like this one are designed to include dedicated workplaces. As you can see, there are three shopfronts on the side street, although one business is currently occupying two of them. The owner of one of the businesses lives in the front part of the house, but if I recall correctly, there's an apartment behind the main dwelling, and another over the garage. This works because the house looks totally normal on the front street, while the side street includes flex buildings further down where you can live and work, so these fit right in.

Here's one of those flex buildings just down the street. If I recall the story correctly, the owner of the building scaled down his business, and so no longer needed the entire work area, so he rents out the front of the ground floor to another business and runs his business out of the side entry. He lives in the main upper-level dwelling unit at the front of the building, but rents out an apartment just behind his, and also rents an apartment over the garage, both of which are accessed from the tree-shaded side porch. It wouldn't be a surprise if the rents were enough that he could live and maybe even work for free.

The employment gets really serious when you get to the town center. DPZ originally designed the town center to be two- and three-story buildings that were mostly flex buildings, similar to Huntsville's historic town center. But David and his co-Town Founders Todd Slyman and Marsha Slyman did such a great job getting the word out to local businesses that by the time construction began, they built town center buildings that were mostly four and five stories. You'd have to drive a hundred miles to Birmingham, Nashville, or Chattanooga to find a bigger town center. There are several reasons for this unexpected success, including these, which I consider the top three:

The Town Founders do a great job of business curation. Their intent is to build a town center filled with businesses that look a lot like traditional towns that are thriving, so while they probably wouldn't turn away a high-end boutique of some sort, I'm not recalling one that's there right now. Instead, they look for a wide range of cuisine in their bars and restaurants, and they have a range of everyday needs to occasional needs, from a specialty grocery to a dry cleaner, a barber shop, a drug store, insurance agencies, mortgage brokers, three hotels, and a lot of other common needs. And that's just at street level. Their focus isn't just getting a good range of business types; they also curate for best-in-class, and actively recruit those best businesses to open in Providence. They also curate a wide dollar range, so the restaurants include a taco shop, a barbecue joint, and a pizza parlor.

The Town Founders are just as passionate about programming. On any given weekday evening where things are dead for miles around, Providence is almost guaranteed to be hopping. Yes, they have things you'd expect like a regular farmers market on the square and live entertainment on the plaza for the blended clientele of the white tablecloth restaurant and the burger place flanking the plaza. But I regularly find new things they've programmed that I didn't expect. And those three hotels? They have the top occupancy for each of their flags in the entire region, and the programming is key, because Providence is hands-down the most interesting place to stay for many miles around.

The third key is the fact that they have long been committed to having a path within Providence from startup to major corporation. Some of the buildings like the one on the left are filled with apartments and condominiums, but several other buildings are filled with offices. I love the story of Mike Durant, who began his business at Providence as a one-man operation. Mike was the real-life pilot of the Black Hawk helicopter on which the Black Hawk Down movie was based. In short order, his business was prospering, so he had to move out of the one-person incubator into larger space elsewhere in the town center. This process continued several times, to the point that he built his own building at the northeast corner of the square.

There are so many great Providence stories that I did an entire presentation at the Congress for the New Urbanism a week ago on just some of them. I'm hoping get more of them published in the coming weeks. In the meantime, what questions do the Providence jobs raise about which you'd like to know more?