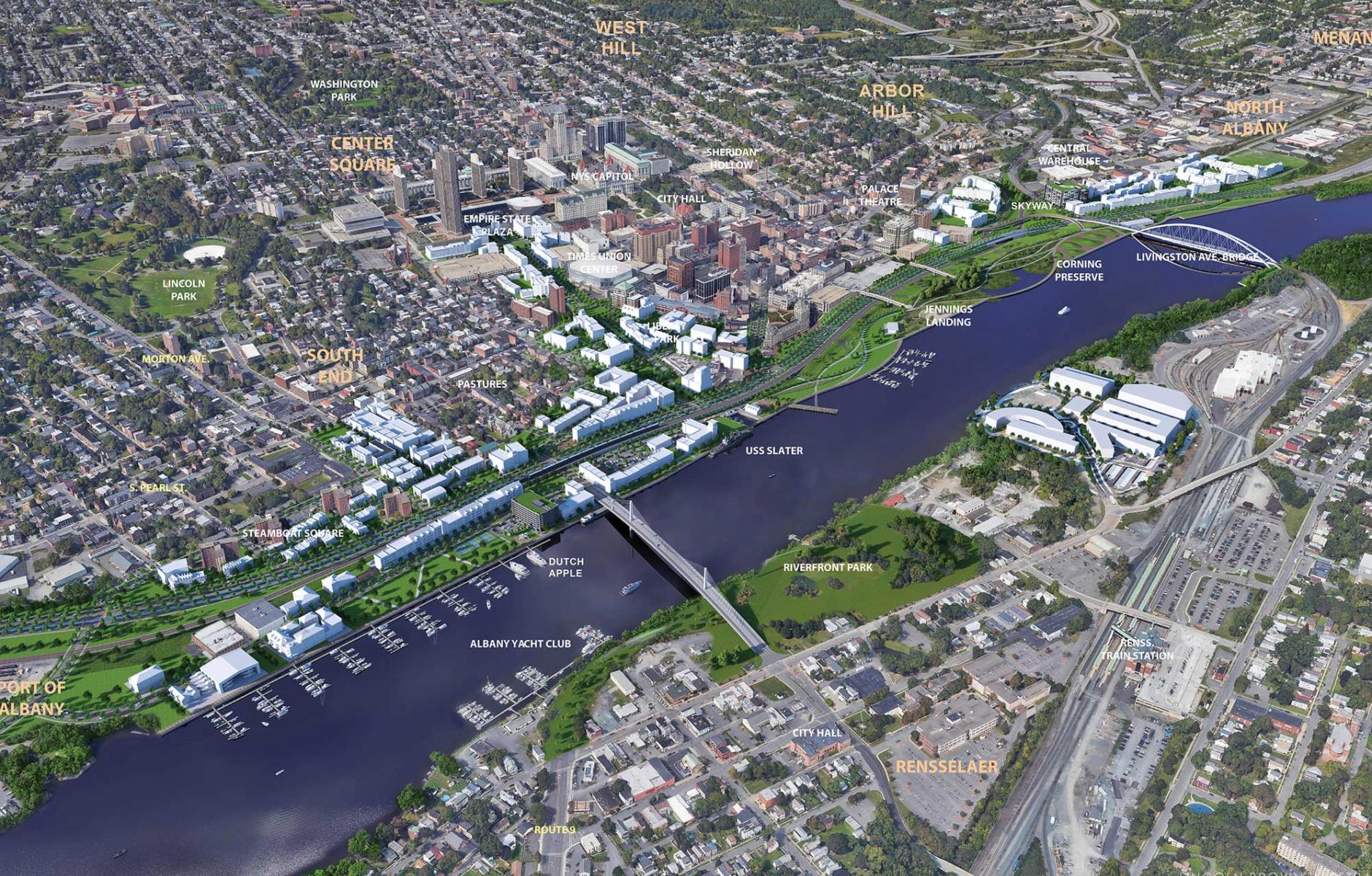 Re-Envision Albany is a compelling vision to transform an unnecessary freeway into a boulevard with green space and equitable development. Albany Riverfront Collaborative won a Merit Award in the Emerging Project category of CNU's 2022 Charter Awards.
ROBERT STEUTEVILLE   &nbspMAR. 7, 2022

For more than 50 years, residents of Albany, New York, have endured the effects of I-787, an elevated freeway that divides the city from its waterfront and neighborhood from neighborhood with a massive access road and imposing on-ramps. Past initiatives to remove the highway have gotten nowhere, because formidable forces—such as state DOT workers that use I-787—are aligned to protect the status quo.

But now, the recently formed Albany Riverfront Collaborative has emerged with a compelling, bold plan called Re-Envision Albany that is gaining momentum. Since the grassroots group launched in November, more than 6,000 people have signed an online petition in support of the plan. The vision of a green waterfront, with human-scale development reuniting neighborhoods, is gaining widespread attention.

“Few other projects stand to usher in such positive transformational change for the city of Albany and the greater Capital Region promising to unleash the real economic and cultural potential of our area for decades to come,” says Patricia Fahy, New York State Assembly member (NY-109).

“In short, the remake would transform downtown Albany in a way that perhaps no other project could,” says Chris Churchill, columnist for the Times Union, in a piece titled The Beginning of 787’s End.

Re-Envision Albany is a conceptual illustration of the city without I-787, a 10-mile section of Interstate serving commuters to the state office complex (through traffic uses I-87 north and south and I-90 east and west, both of which go through the city). Since the goal is to inspire discussion by showing what is possible, the plan is flexible to allow for organic growth, the group emphasizes.

The group studied historic maps and analyzed existing conditions to determine the best way to repair the damage and move forward. “It became clear that the best solution was to re-imagine I-787 as a surface boulevard connecting to a network of streets,” the collaborative told CNU. “This would establish an urban street network similar to what had existed before while bringing enhancements to the historic infrastructure. Streets are designed to include multi-modal infrastructure that could be extended into other areas of the city. Reviving the street network enables the urban fabric to develop by proposing new parks along with over six million square feet of development for a wide range of new residences, offices, civic uses, and commercial spaces. Economic impacts of the design were studied and shown to bring more opportunity in the form of over $300 million in financial benefits to the city, along with over 3,000 new jobs.”

Through affordable housing, sensitive development, and inclusive public engagement, the plan is aimed at economic investment that enables existing residents to remain and benefit. A wide range of living spaces are accommodated, including row houses, duplexes, fourplexes, live-work, courtyard apartments, apartment buildings, and condominiums in a variety of sizes. “The intent is for a diversity of price ranges as well from subsidized, to affordable and attainably-priced, to market rate and luxury,” the group reports.

The plan balances economic development with the creation of public space to transform rough utilitarian areas into amenities accessible to everyone. The landscape ideas include generous parks along the river, within walking distance to neighborhoods. Like Chicago’s lakefront but on a smaller scale, it would transform Albany’s relationship with the Hudson River. Small civic spaces like playgrounds, squares, and plazas are planned in mixed-use development areas.

A short existing access highway to the Empire Plaza, the state office complex, is re-envisioned as a linear park approximately sixty-five feet wide, spanning several blocks to connect the Empire Plaza physically and symbolically with the river. That corridor would have a tree-lined street on one side and be framed by architecture to create an inviting space. Throughout the plan, buildings are designed to be facing the street with activated facades including shop fronts, stoops, and porches.

The group is now preparing for the next steps, including workshops to be held in each neighborhood. These will allow residents, property and business owners, and other stakeholders to establish a localized vision. The collaborative is working to acquire funding for community and urban planning studies, accompanied by traffic and environmental engineering studies and analysis.

“Re-Envision Albany has made progress toward action in ways that previous initiatives did not. Illustrations, examples of similar efforts, economic review, and narrative-driven stories have excited people throughout the entire region, and decision makers have taken notice,” the group reports. Volunteers have generated small films, a website, a conceptual urban design and renderings, conducted interviews, and created a robust social media presence. Relationships forged with policy makers and stakeholders include the municipal planning organization, state assembly members, the mayor, US senators, and governor.

With Re-Envision Albany, the Albany Riverfront Collaborative has created a playbook for how to get a region excited about the transformational power of in-city freeway removal.