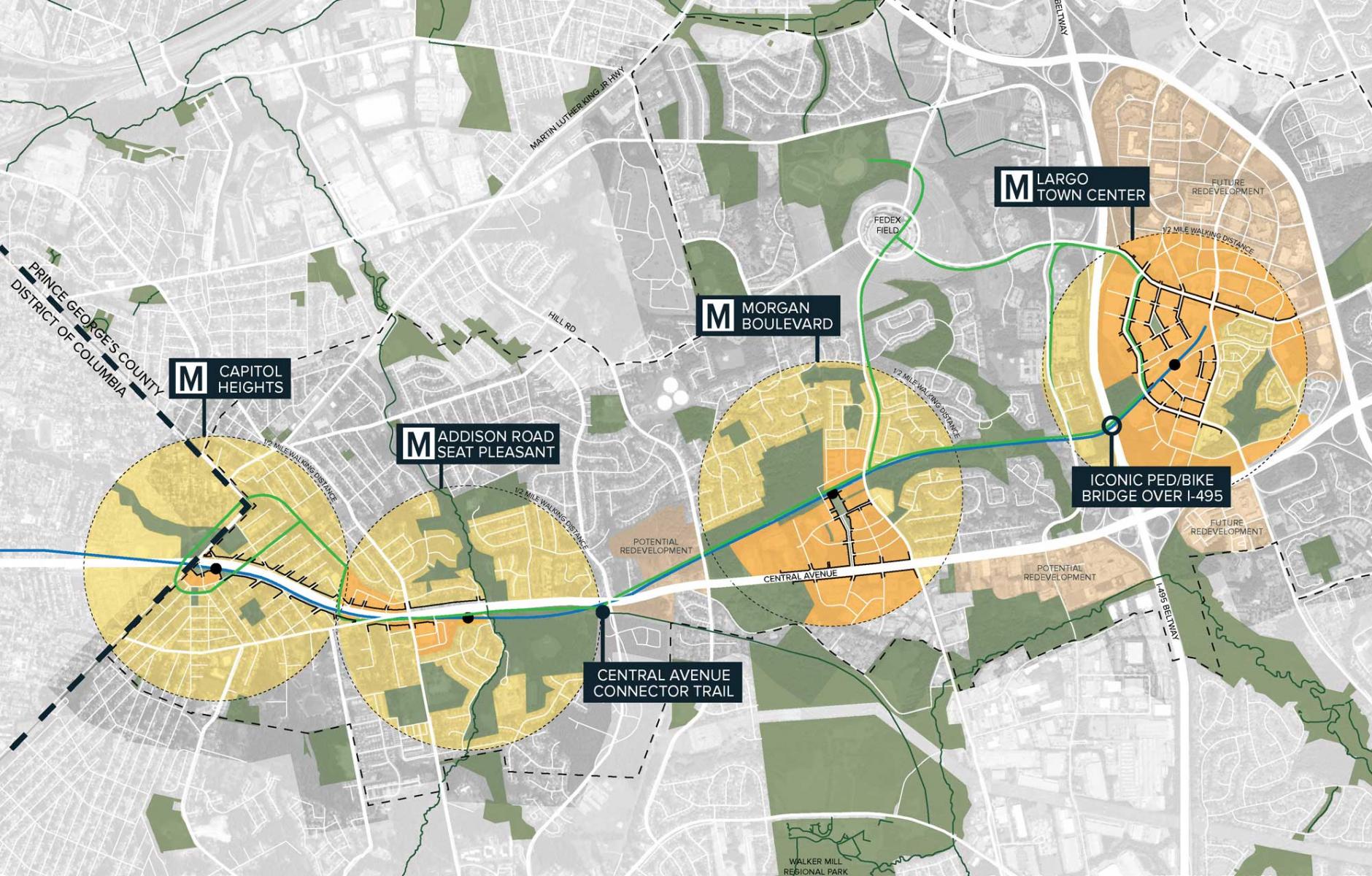 Economic development goals in Prince George’s County, Maryland—the largest predominantly African-American suburb in the US—are centered around transit-oriented development (TOD) on the DC Metro system. The county has 15 stations in multiple corridors. The four stations on the Blue Line Corridor will test the potential of this policy for the county as a whole.

The Corridor will guide economic development activity for 20 years: setting policy and investment goals; growing the tax base; attracting jobs; connecting people to transit and services; boosting housing affordability; and launching signature projects. Prince George’s has adopted a well-funded plan for transit-oriented suburban infill and retrofit. The Blue Line planning area is about ten square miles, including up to a thousand acres of undeveloped or underutilized land around the stations.

The TODs are strung out on or near Central Avenue, a 4- to 6-lane suburban arterial that is slated for a pedestrian-friendly redesign. Central Avenue is re-imagined as a complete street, lined with mixed-use buildings and active street level uses to create a safer, immersive environment, the team explains. A network of streets and sidewalks, reduced block lengths, bike lanes, more frequent intersections, and safer crosswalks will enhance multi-modal connectivity. The pedestrian-bicycle Connector Trail along the corridor will link the stations, traverse natural stream corridors, and connect neighborhoods.

“The Blue Line Corridor is a new model for comprehensive place-based, economic development,” says Angela Alsobrooks, County Executive. “We will transform the BLC into an accessible, walkable, amenity-rich destination with access to transit.”

The county has secured $45.7 million for corridor projects, including a $14 million complete street reconstruction for Central Avenue, an $11 million multiuse trail, a $16 million amphitheater, $2 million in other pedestrian safety improvements, and public art.

“Sense of place isn’t something we can take for granted. We will increase areas with identifiable character and create positive and safe spaces for residents to gather and connect,” Alsobrooks says.

The purpose of the corridor plan is to create a replicable place-based economic development model to achieve local and regional goals:

The most ambitious TOD planned for the corridor is now home to the NFL stadium of the Washington Commanders. Municipal functions have been relocated there, including county administrative offices.

As redevelopment occurs, streets and blocks are reconfigured, arterials become complete streets, and new plazas, greens, and squares emerge. Development intensity transitions from the station core to the edge. Properties with buildings to remain are reconfigured with new streets, blocks, and infill buildings to complete desired frontage and urbanism requirements. An existing transit agency garage will be wrapped with housing, office, and/or hotel. County government is relocated from Upper Marlboro, a symbolic and demonstrable public commitment to transit.

A public-private partnership will transform 50 acres of County-owned land adjacent to Largo Town Center. Demolition is complete, a new regional medical facility is built, and phase one construction has begun on what will be two million square feet of mixed-use development.

Cultural facilities compliment development, create character, and bring people together beyond just living and working. Largo Town Center will include the 5,000-seat amphitheater, a major public plaza in front of the station to support cultural and entertainment events, an iconic ped-bike bridge terminating the Connector Trail, and, potentially, a new multicultural center.

The Blue Line Corridor is TOD/suburban retrofit on a scale that rivals anything in the DC metro area, and perhaps the US as a whole. It contains six major projects—the four TODs, Central Avenue, and the Connector Trail. As designed, the corridor will be home to a substantial population that has access to regional transit, open space, an active lifestyle, and cultural amenities.

The political support for the plan was stronger than expected, because county officials recognize the corridor as a model. As it gets built out, the acceptance of density is going to depend on the design of what is built, jurors note. The county should “be very intentional of amenities so there is a level of diversity and variety that responds to the local community needs,” according to the jurors.