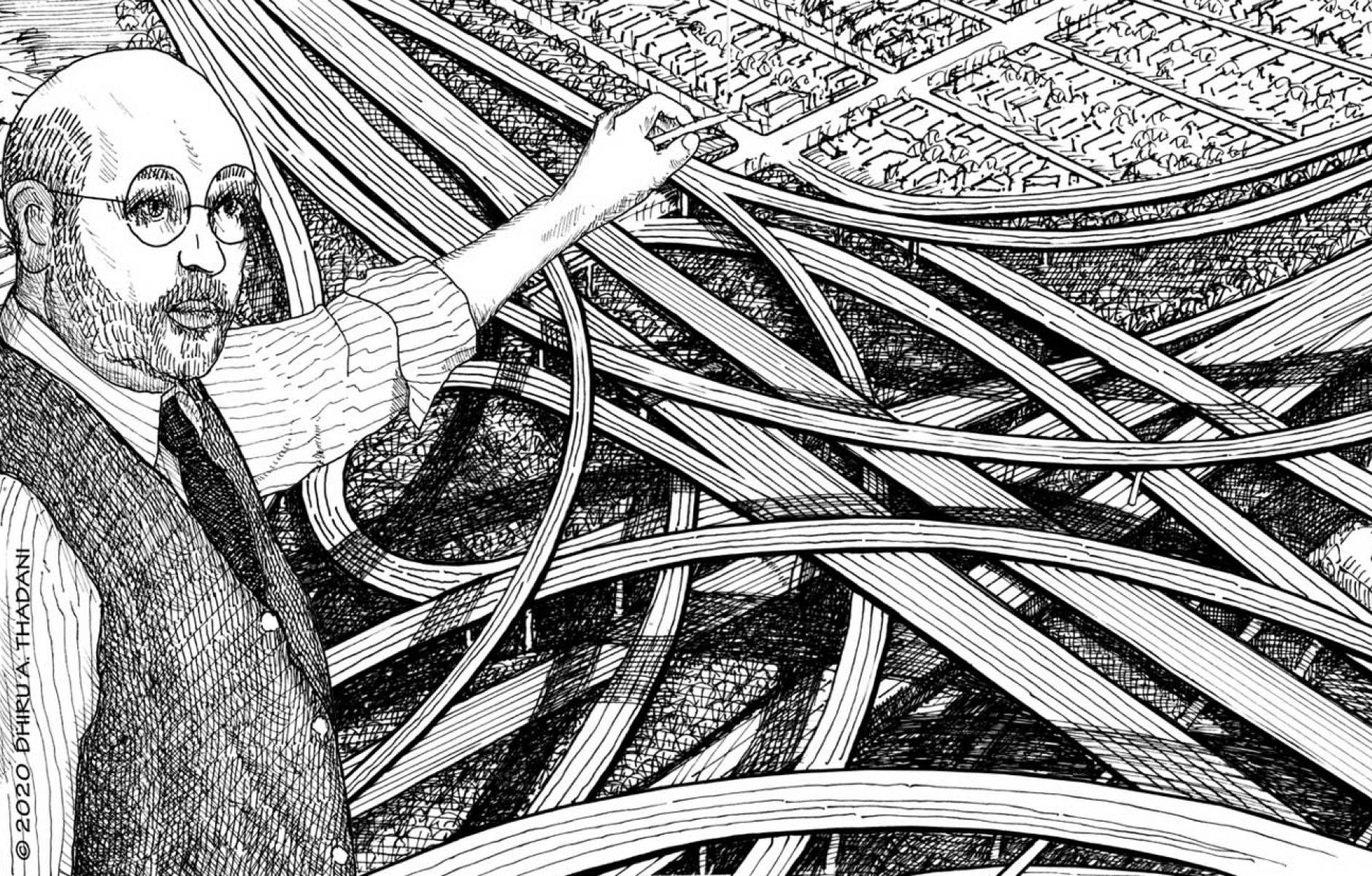 There is an abundance of in-city highways in the US that need to be demolished, buried, or capped so that neighborhoods can be made whole again.
DHIRU THADANI   &nbspJAN. 3, 2022

This essay is written as a warning to city administrators and finance directors all over the world who are considering building highway projects within urban areas.  Experts have erroneously led city officials to believe that these expensive capital projects will alleviate congestion and improve mobility.  To the contrary, inner-urban highway construction produces infrastructure that has a short lifespan, and there is no chance of recovering the investment.

The United States is a laboratory for well-intentioned automobile-oriented infrastructure projects that are now being torn down, buried, or built over in an effort to repair the physical scars and social fragmentation caused by their construction.  In the middle of the 20th Century there was a concerted effort to connect metropolitan regions with highways, and revitalize declining cities by bringing high-speed, multilane arteries around and through urban cores. The remnants of these injudicious efforts are now in desperate need of repair, while impacting the financial security of the jurisdictions and of the country.

Several groups around the country are working hard to shift the focus in urban areas from high-speed automobile orientation to more humane pedestrian-scaled environments. The Congress for the New Urbanism has been actively involved in advocating for elevated highway teardowns. In general, when highways entered city limits, they systematically shattered the fabric of once whole minority neighborhoods in many American cities, leaving behind an artifact of several generations of racist segregation policies. They have always been visual eyesores, making residual uninhabitable spaces and creating an impenetrable fortress between neighborhoods of the haves and have nots.

From the east to the west coast of the US, as well as globally, there are multiple examples of elevated highways being removed from the inner-city and returning the land to the neighborhoods that were inflicted. All of the projects implemented have had a positive outcome for the well-being of citizens. In San Francisco mother nature hastened the disassembly of the Embarcadero Freeway when the 1989 earthquake caused severe damage to the structure.

The original 1968 plan for the Embarcadero Freeway was to connect the Bay Bridge and the Golden Gate Bridge, but the project was never completed.  However, the portion that was built separated the city from its waterfront and imposed long access ramps onto the adjacent neighborhoods. The first estimate of $15 million to repair the freeway damage caused by the earthquake seemed reasonable to city administrators and citizens. But when it was later determined that the damaged portion would cost $70 million to be reconstructed, public opinion was swayed to an alternate proposal to demolish the freeway and replace it with a boulevard. Over 100 acres of land was transformed to make a public plaza and waterfront promenade with the iconic Ferry Building as the focal point.

Similar transformations have occurred over the past three decades in Toronto, Canada; Paris, France; Seoul, Korea; Portland, Oregon; Milwaukee, Wisconsin; and many other cities. Yet the message that highways of any kind do not belong in urban areas has unfortunately not reached the developing nations, who have only recently started their love affair with private automobiles. Cities such as Mumbai have embarked on expensive highway construction within the city at the expense of residents now faced with these elevated concrete snakes a few meters from their windows. These disproportionate expenditures favor owners of private automobiles, while doing nothing to improve transit and the pedestrian experience within the city. The only equitable solution is to move high-speed automobile traffic below street level and leave the city’s ground plane intact for slower forms of movement. Automobile fuel taxes along with road tolls should be adequately levied to cover the infrastructure expense.

The terms “Freeway Lid” and “Freeway Cap” have entered the lexicon of urban design, referring to a strategy to repair urban environments that were scarred and fractured by highway construction. As a strategy a lid is possible when the highway road surface is well below the city level and a continuous plane can be built over the highway without impacting the functionality of the existing infrastructure. The new land provides more usable space in dense urban areas, to create parks, build buildings, and even reconnect the streets that were cauterized by highway construction. This expensive undertaking mitigates the negative impacts of freeway traffic pollution, noise, and visual squalor.

While highway teardowns usually focus on demolition and the removal of unnecessary infrastructure, which regains the ground plane, highway lids maintain the infrastructure and build new land above. Another strategy that has been employed to repair the discontinuity created by urban highway construction is to bury the thoroughfare in a tunnel and recapture the land at city level. An example is the Central Artery Tunnel Project commonly known as the ‘Big Dig’ in Boston. The project rerouted Interstate 93 into a 1.5-mile-long tunnel at the exorbitant cost of $22 billion as estimated by The Boston Globe. There is nothing more expensive than fixing a misguided traffic solution that negatively impacted the city. The net result for citizens is a 17-acre linear park providing landscaped gardens, promenades, plazas, fountains, and art installations in the heart of downtown Boston. And it has had the additional benefit of increasing property values for adjacent properties.

A lid project in Washington, DC, captured land above Interstate 395 between E Street and Massachusetts Avenue and 2nd and 3rd Streets NW. The privately funded seven-acre project yields 2.2 million square feet of mixed-use space and is expected to create 8,000 permanent jobs and generate an estimated $40 million in annual property tax revenues. Interstate 395 is an eight-lane highway built in 1975 as a bathtub, a trench flanked by retaining walls which serves as the terminus of I-395 into New York Avenue. This portion of the highway is a remnant of a larger plan that was never completed. The tunnel was an engineering feat for its time, as the roadbed surface is below the water table. A 10-foot-deep concrete slab was poured to resist the upward force of the underground water. The air-rights above the freeway were sold in the 1970s, disputed during the market downturn of the 1980s, revived in 2006, and sold in 2012. The private partnership paid $120 million to the city to secure the air-rights along with their commitment to pay for utility relocation, reconfiguration of access ramps, and restoration of the original street grid above I-395 in compliance with the Pierre L’Enfant plan for Washington, DC. The partnership raised $1.3 billion in private funds to implement the project.

Economic return was the motivation for the Washington lid project. However, several similar projects have been undertaken solely for the overall benefit of the citizens and improvement to their quality of life. Thriving cities that are experiencing population growth and an influx of knowledge-based workers are often starved for recreational green spaces within their city limits. A recent public space addition to New York City was Little Island Park, built on a different form of infrastructure, a reconstructed pier in the Hudson River in southwest Manhattan. Inspired by other public parks, the experience permits visitors to leave the city behind and be immersed in the micro-climate induced by the vegetation and the excitement of being over the water. A single philanthropic gift paid for the public park and performance space that opened in 2021. The easy connection of this waterfront park to the adjacent West Village Neighborhood was made possible only because West Street was reconfigured as an urban boulevard and pedestrian promenade along the Hudson River.

A similar project in its early planning stage is the Midtown Connector Transportation Improvement Project in Atlanta, an ambitious undertaking to restore the transportation network and create a park and greenspace while responsibly tackling environmental and equity issues. This lid project will span from North Avenue to 10th Street, over Interstate 75. The proposed location of the lid will enhance Midtown with much needed open space in this rapidly expanding city that is actively promoting population growth.

The project will add 25 acres of green space, vertically integrate transportation with public gathering spaces, enhance roads and connectivity, and improve mobility in Midtown Atlanta. The initiative is privately funded, and hopes to garner federal, state, local, and private support. The city of Atlanta is a calamitous example of destroying minority neighborhoods in an attempt to move highway traffic through the city. These always-congested thoroughfares have done more damage than good to the city’s welfare, resulting in excessive air and noise pollution from idling cars stuck in traffic, visual scarring of the urban fabric, and significant public health deficiencies.

Embarking on projects to rectify past infrastructure mistakes is an expensive proposition. But data, analysis, and historical precedent have made a convincing case for cities to realize that expending funds on retrofits is the only option if they are to have a safe, healthy, and sustainable future. There is an abundance of highways in the US that need to be demolished, buried, or capped so that neighborhoods can be made whole again. There is no reason to add to the list of failed auto-oriented infrastructure by building new highways within urban areas.

Despite the overwhelming evidence regarding the futility of expanding highways, projects such as the I-45 expansion in Houston, Texas, continue to be promoted. This controversial project is currently being debated as it proposes that I-45 be relocated from its current route and elevated above US 59 to flow along the east side of the Central Business District. The $8 billion project would displace 160 single-family homes, 433 multifamily residential units, 486 public and low-income housing units, 344 businesses, five places of worship and two schools. Despite these casualties, proponents of the project, the Texas Department of Transportation (TxDOT), and Houston city officials claim that the expansion would get single drivers out of cars, improve quality of life, and even decrease freeway crashes by 30 percent. Similar claims have been made in the past to promote highway expansion through cities, but the optimistic assertions have uniformly failed to achieve the goals that were promised.

Decision-makers be forewarned that building new infrastructure for automobiles should be halted in favor of improving transit systems and pedestrian environments. Within a generation, private automobiles will be a luxury unattainable for the majority of the population. Similarly, intercity high-speed rail should be considered, rather than focusing on airport expansion. Those holding out for sustainable nonpolluting jet fuel must realize that it is a conceptual idea that may never be achieved. To seriously combat climate change, the pollution impacts of all forms of travel need be evaluated before public funds are expended on undertakings with a limited lifespan.