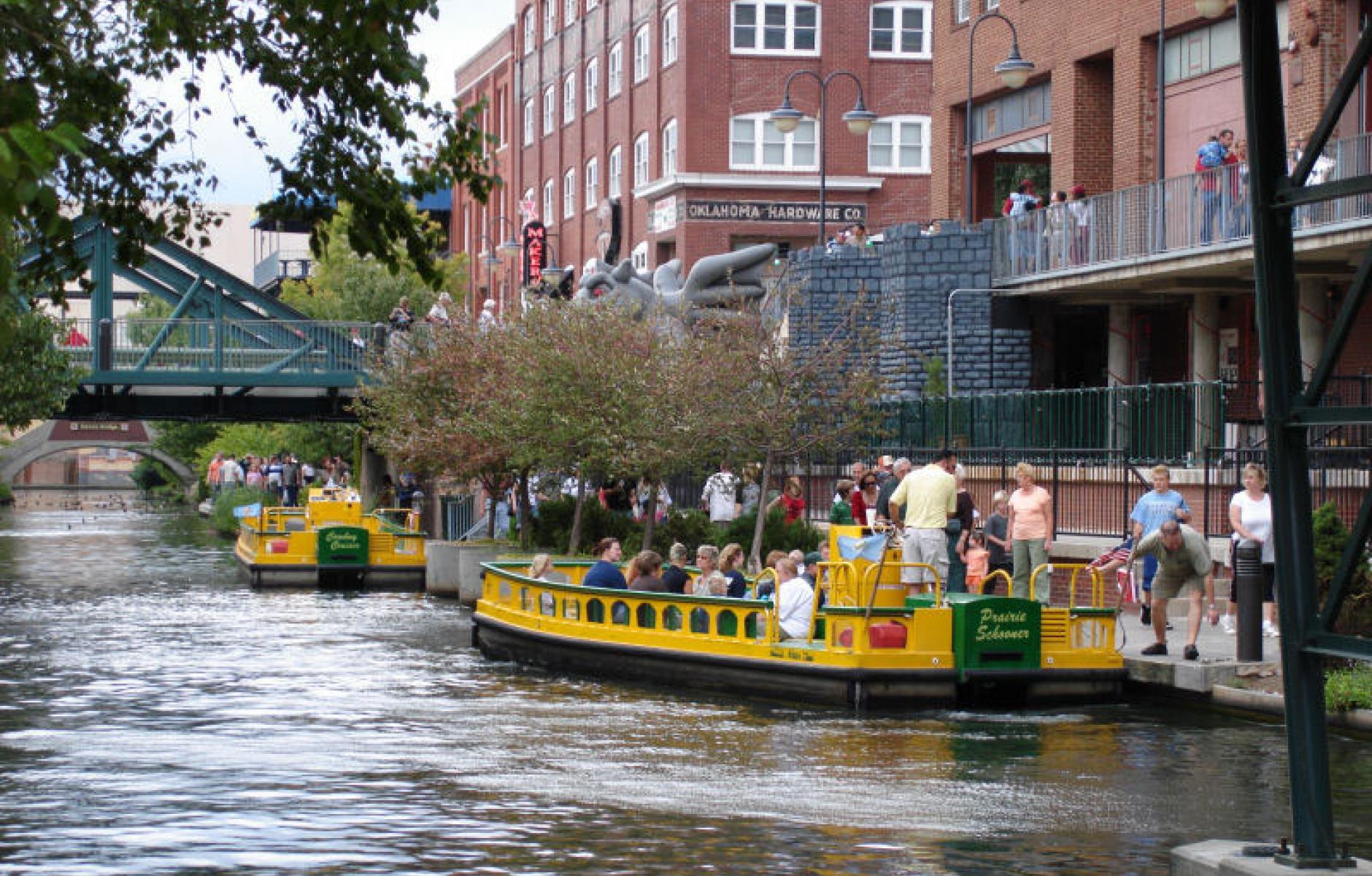 The program that ‘changed everything’ for Oklahoma City

Thirty years ago, Oklahoma City’s downtown was hurting badly, and the city’s livability and beauty were at a low ebb. A policy called MAPs transformed the city.
ROBERT STEUTEVILLE   &nbspNOV. 23, 2021

Oklahoma City (OKC) is one of the few major cities with championship-level kayaking and whitewater rafting in the middle of the city. Downtown is connected to a seven-mile-long recreational riverfront via a series of manmade “river lakes.” A new urban canal links downtown to the Bricktown neighborhood, with a canalwalk. A streetcar began operating in December of 2018.

These are just a handful of facilities made possible through MAPs (Metropolitan Area Projects), a program that has transformed OKC’s image and livability. MAPs could be called the City’s superpower. The program, which began in 1993, has turned what used to be a dull downtown into a city center that attracts visitors from far and wide, among other benefits.

Oklahoma City has had its ups and downs in the last hundred years. During the first half of the 20th Century, it was something to see. The booming metropolis boasted an extensive streetcar system, and in the 1920s OKC more than doubled in population. Downtown was the hub of business and commercial activity, the place where most people in the region wanted to shop. During this era, the 1946 song (Get Your Kicks on) Route 66, identified Oklahoma City as a cultural highlight on the route between Chicago and LA. A half century later, OKC’s downtown would be described as “basically zero on the beautification scale.” The city was not worth visiting, said Mick Cornett, mayor from 2005 to 2018.

What happened? The streetcar was taken out in the late 1940s, replaced by buses, and the rail right-of-way became more asphalt for too-wide streets. Those streets were converted from two-way to one-way, which allowed traffic to move faster and made thoroughfares more hostile to pedestrians. As downtown became more of a place to “drive through” than “to,” the retail fled the city center for new shopping centers and malls in the suburbs. Many buildings were torn down and replaced by parking lots. By 1990, one councilman bluntly criticized downtown as having no major retail or attraction, and “no place to eat.” Although downtown maintained a workforce in office buildings, it was effectively dead as a residential and social center of the city of 440,000 (1990 population, now 681,000). Also, the city had been hit hard economically by the collapse of the oil industry in the 1980s.

Not long after that, then-mayor Ron Norick hit on the brilliant policy that has since led to a remarkable revival. MAPs was spurred by a wake-up call: United Airlines turned down the city’s bid for a new facility because, the airline said, Indianapolis had a higher quality of life. “What corporate America was really looking for was the quality of life that Oklahoma City did not offer,” said Cornett on the 20th anniversary of MAPs in 2013. The original MAPs was approved by a 54 percent majority in a late 1993 referendum, one month after polls showed that it was still unpopular. The initiative could easily have failed, and OKC would look far different today. Without MAPs, CNU would probably be holding its 30th Congress elsewhere.

MAPs is funded by a one percent city sales tax, with a sunset of seven years. Revenues go into a specific fund to pay for a slate of projects. Residents vote on the tax and the projects together. This structure allows the city to dream big, creating facilities and programs that would never happen if they had to compete with day-to-day city needs like sewer systems, police, or schools.

“Because of the MAPs initiative, there are a lot of amenities in downtown,” notes Public Works Director Eric Wenger. As a result, “The tourist economy has had a significant economic impact.” The number of major downtown hotels rose by 600 percent in the first 15 years of MAPs.

Projects are paid for in cash, without incurring debt, a “pay as you go” approach that is politically popular. Projects are bundled together as packages that appeal to wide constituencies. The program is run by an advisory committee of citizens. This structure made the program resilient to changes in city leadership, and MAPs has been refunded and supported by every mayor since Norick—Kirk Humphreys, Mick Cornett, and David Holt, the current mayor.

Unlike “silver bullet” projects that provide a single amenity that is supposed to transform downtown—like a convention center or sports arena—the diversification of MAPs boosts its chances for success. Over time, MAPs contributed substantially to the public realm, the built environment, and the quality of the city’s urban design.

There have been four MAPs programs:

The 1993 MAPs totaled $350 million and had an enormous impact, including the following projects:

The first MAPs improvement completed was the Bricktown Triple A ballpark in 1998. Until that happened, there were many doubters as to whether MAPs would work, Norick said.

MAPs 2 in 2001 generated about $500 million, and all of the money went to improvements in schools. With an eye to addressing obesity issues, new gymnasiums were built for the city’s elementary schools. Seventy percent went to city schools, and 30 percent to 23 suburban school districts.

The third MAPs was approved in 2009 and generated $777 million for a slate of urban projects:

Each of these projects individually might not have transformed the City, but putting them together had a cumulative effect. Businesses started coming back downtown in the 2000s.

Devon Energy Center built a 50-story, $750 million headquarters, planned in the first decade of this century. As part of that deal, Devon Energy required that incremental taxes would be spent on beautifying downtown. Despite new amenities from MAPs 1, downtown still looked unappealing as of 2010.

MAPs provided a model for how to allocate the $180 million tax increment to specific, highly visible improvements. The result was Project 180, previously reported in Public Square, which has transformed the appearance of downtown streets and public spaces and made the city center more walkable. This included conversion of streets back to two-way, planting of thousands of trees, on-street parking, sidewalk upgrades, and more.

MAPs, which set all this in motion, “was probably the most transformational event that has occurred in any major US market,” Norick said.

“It’s not an exaggeration to say that MAPs changed everything,” said Humphreys.