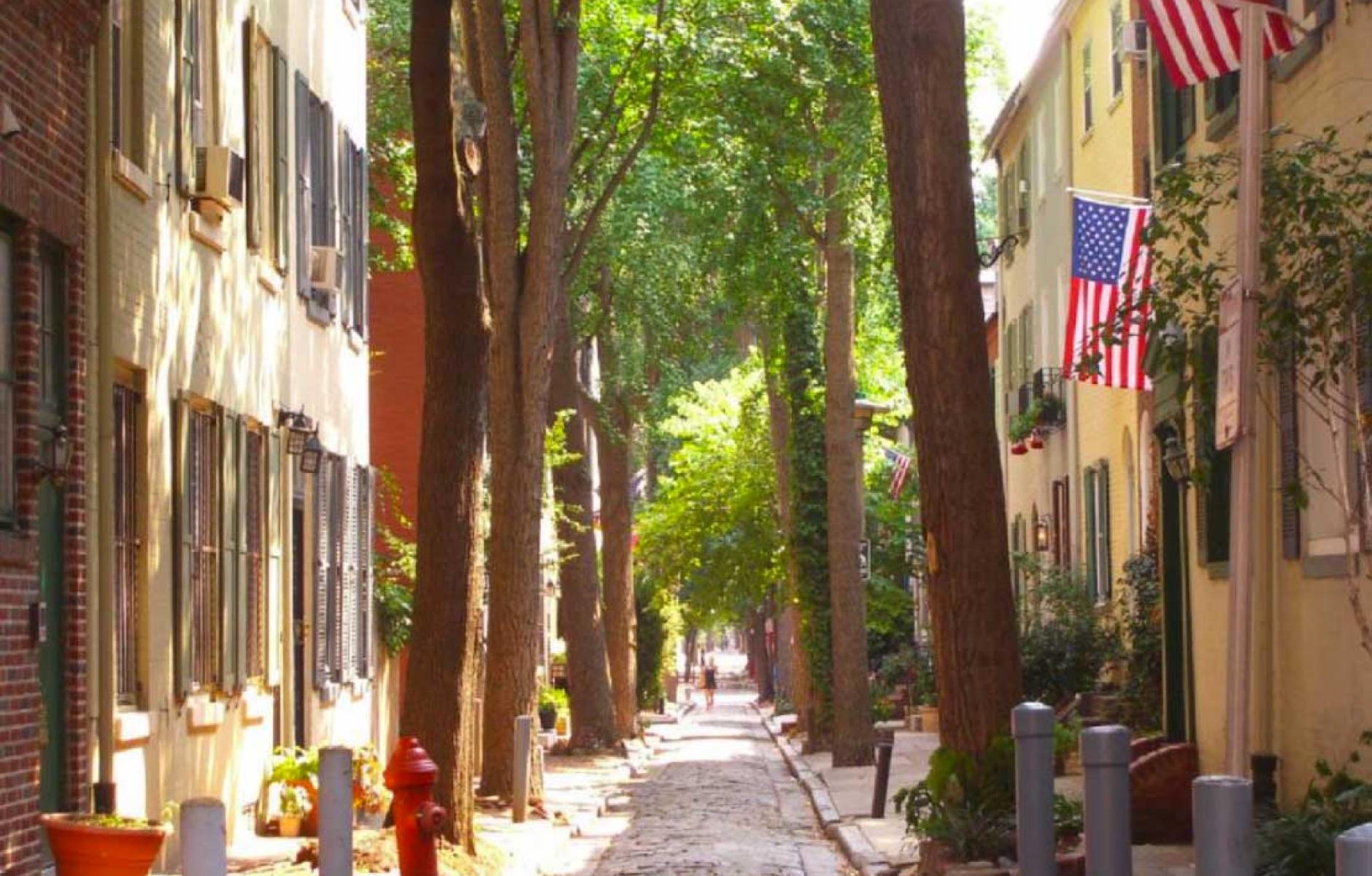 The unsung alley has the potential to create an intimate American urbanism, it just needs a little attention from urban designers.
ROBERT STEUTEVILLE   &nbspSEP. 29, 2021

Alleys were a neglected and unused element of the American built environment for at least a half century, until they made a comeback through the New Urbanism in the 1980s. Traditional neighborhoods developments (TNDs) included alleys for trash collection, utilities, and the primary purpose—to move garage doors off streets.

The use of alleys in TNDs allowed for more compact and human-focused frontages on streets—part of the restoration of a walkable public realm. That move has been successful—as far as it goes—and yet urbanists may be missing a significant opportunity to transform urban places. An architect and urban designer, Thomas Dougherty, makes that case in a recent e-book, The American Alley: A Hidden Resource.

Not all traditional US cities and towns have service alleys, but many of them do. Cities with loads of alleys include Denver, St. Louis, Detroit, Chicago, Indianapolis, Memphis, Nashville, Seattle, Sacramento, Phoenix, Kansas City, Long Beach, Birmingham, San Antonio, Milwaukee, Minneapolis, Savannah, Washington DC, and many other places small and large. “In Chicago alone, there are 1,900 miles of alleys,” notes Dougherty, citing a statistic that highlights the momentous number of alleys in the US.

Meanwhile, another overlooked piece of American cities, accessory dwelling units (ADUs), has come back into style recently. New urbanists have been promoting ADUs for decades, but recent state and city legislation has kicked their resurgence into high gear. That trend is most evident in California, where a 2016 state law made ADUs legal on single family lots. The law dramatically increased the construction of this dwelling type, and ADUs now make up 40 percent of housing building permits in Los Angeles, and 38 percent in San Jose, according to the Terner Center at UC Berkeley.

ADUs offer more affordable housing that can be built incrementally behind houses, where alleys are often located. Dougherty puts two and two together and says “the revival of ADUs and alleys can play an important role in addressing a host of issues in our communities today.”

That said, ADUs are not currently being designed to improve alleys as places, Dougherty says, but “will arguably degrade the alley in ways that prompted zoning codes to ban them a century ago.”

That’s an important point on its own, and yet Dougherty draws attention to yet another neglected urban thoroughfare that raises the stakes on this issue considerably: He calls them “minor streets,” but they also go by “mews streets.” As someone who grew up just outside of Philadelphia, I have long been fascinated with that city’s wealth of tiny, mid-block streets that are often six to 12 feet curb to curb, fronted by townhouses. Once overcrowded and filthy, these streets are spectacular today (see photo at top).

Attendees of CNU XV in Philadelphia toured a few of the tiny streets in 2007, but they received less attention than they deserved. There are two reasons for that: The exceedingly narrow dimensions make it hard for planners to imagine new streets being built along these lines. Also, minor or mews streets didn’t fit into a theoretical new urbanist framework at the time. According to Dougherty, minor streets are a model for what alleys (typical right of way, 16-to-24 feet) could become when they grow up.

Opticos won a Charter Award for Daybreak Mews. It creates relatively high density missing middle housing blocks that fit into the scale of a single-family neighborhood. The project also creates an intimate, human-scale urbanism on a mid-block pedestrian mews. Like the Philly minor streets, Daybreak Mews generates a much finer grain urbanism—four blocks in place of one—that makes for a really interesting addition to a neighborhood that also happens to create value.

Opticos has multiplied this kind of intimate news design by getting rid of cars in a 15-acre project called Cul-de-sac in Tempe, Arizona. Cul-de-sac, another Charter winner, is one of the most closely watched urban developments in America, now under construction.

The insight of The American Alley is that this intimate, mews-scale development could be applied to thousands of miles of alley right-of-way across America. That’s an exciting prospect, and one that is worth exploring further.

Methods 1 and 3 are related. Number 1 is a lean way of achieving the goals of number 3. Dougherty makes the case that a more complete alley form-based code—even that could be done in a lean way—could bring in incremental developers. I asked him whether such a code had been created anywhere.

“No one has written an 'alley form-based code' or an 'inner-block' form based code,” he replied. “I am sure New Urbanists would push back and say that they have written codes that include the 'inner-block', but I would argue that they have not written something specifically for ‘inner-block’ and the characteristics of ‘nesting,’ ‘human or pedestrian scale’ and ‘transect shift.’ It's something that has come up a number of times when I have talked with members of, and also public presentations to, the New Urban Guild and National Town Builders Association. In these discussions, everyone has agreed that there has never been an ‘alley form-based code’ or ‘inner-block form based code’—which by its nature could be written and enacted block-by-block without effecting or relying on the rest of the town or city. My dream is to help write one.”

Methods 2 and 4 are also related, as Daybreak Mews shows (it could be considered an example of either method as a space formed by a single developer).

No less an urban thinker than the late Grady Clay—who first used the term New Urbanism—was a fan of alleys. He wrote a small book on alleys in 1978 in response to public policy against alleys in St. Louis at the time. Clay wrote, “Out of sight and out of mind, the American residential alley has been the academic, geographic and social outcast of the built environment for at least half a century … The literature on alleys is rudimentary, to say the least, and it is now time to consider what the alley is, and what it might become—a hidden resource waiting to be recognized.”

Dougherty’s e-book features some of the discussion that Clay calls for, including a historical analysis on minor streets, service alleys, and mews. I didn’t know that the plan for Savannah, Georgia, brought the service alley to America. The story of minor streets in Philadelphia is also told—useful background on the urban design questions of today.

More than 40 years after Clay raised the issue, alleys in St. Louis and many other cities are still neglected and underutilized. It’s time we gave them a whole lot more attention.