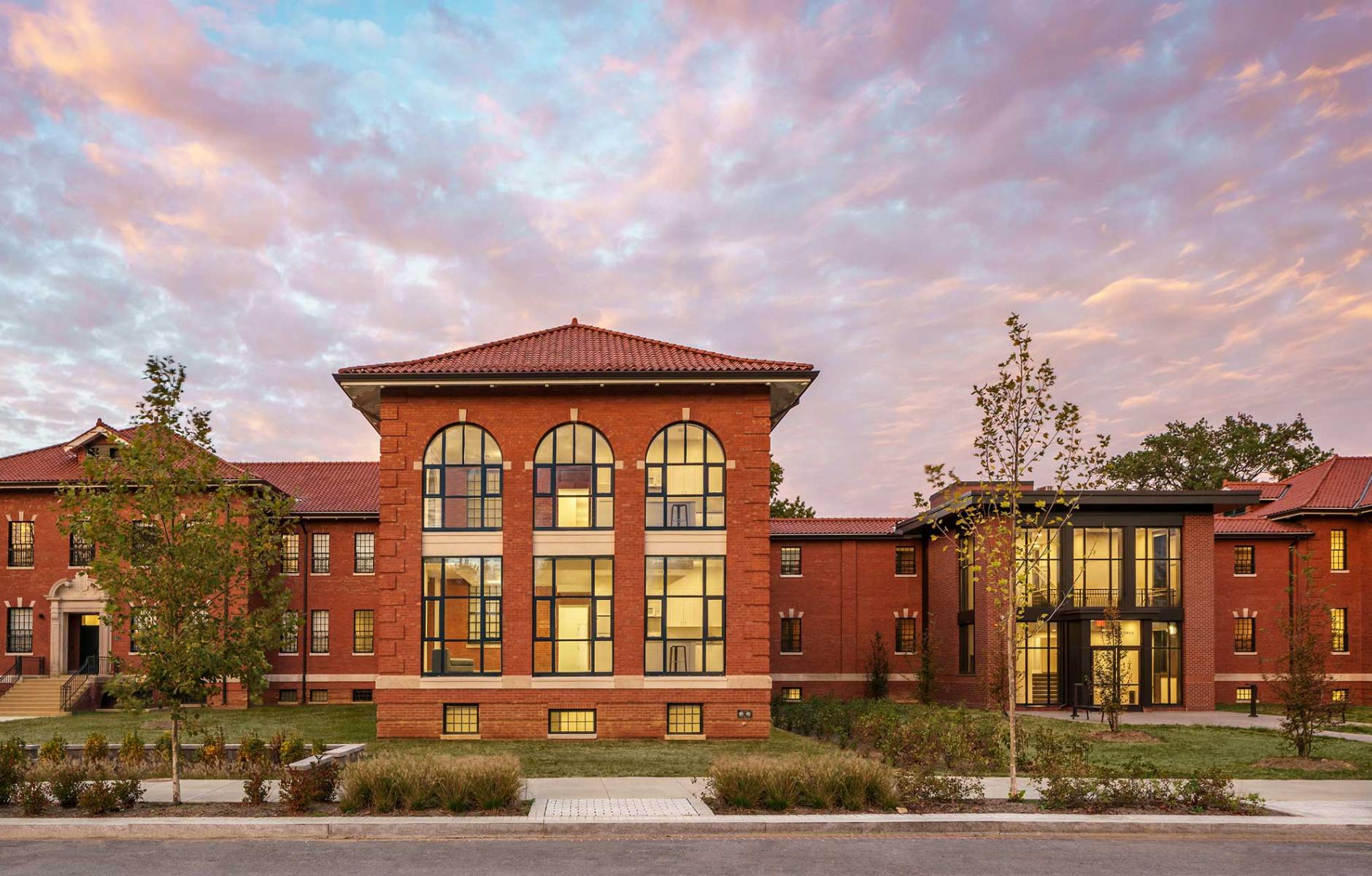 The adaptive reuse of the former St. Elizabeths Hospital building complex opens the buildings to the public realm with welcoming entrances and eyes on the street. Source: Cunningham | Quill.
Equity

The redevelopment of the former St. Elizabeths Hospital in Washington DC combines historic preservation with affordable housing and opens a large campus to the public realm.
ROBERT STEUTEVILLE   &nbspJUN. 16, 2021

The redevelopment of the historic 180-acre campus of St. Elizabeths Hospital, a mental health facility that closed in the 1980s, gives a long-awaited boost to the Congress Heights neighborhood in southeast Washington DC.

I wrote about this plan in 2017, when it was an appealing vision. Now it’s an adaptive reuse development that is creating substantial affordable housing. The first portion is built, with a new Metro station, a major sports and entertainment facility that provides jobs and draws regional visitors, a community center, a pavilion for farmers markets and events, and the redevelopment of seven connected historic brick campus buildings as housing.

The long-term vision is to create what amounts to a whole new neighborhood, with many housing types, civic uses, employment and a mixed-use town center built around the Metro station.

The plan is off to a strong start with The Residences at St. Elizabeths East—a rare example of combining historic preservation, and the challenges and costs it demands, with affordable housing in a competitive market. The former Continuous Treatment complex buildings, built in the 1930s and 1940s, are transformed into light-filled spaces for community residents.

Following on the trend of developers converting factories and warehouses into loft living, the project takes this concept further by making the majority of new apartments affordable for area families through low-income housing tax credits. “This demonstrates how careful financing coupled with sensitive and creative responses to preservation requirements can work in concert to save unique historical urban fabric and create new housing where it’s desperately needed,” according to the designers, Cunningham | Quill Architects.

Eighty percent of the 252 units are affordable, fulfilling a need in one of the nation’s most expensive cities. The remaining 20 percent are market-rate. All units are sized for families.

Although the historic buildings and their frontages are more campus-like than urban, the site planning benefits substantially from new urbanist thinking.

The project’s design opens the campus to the public realm, weaving the buildings back into the community. Imposing fences are replaced with a new street network. Due to the mental-health focus of the former hospital, the original architects provided few connections to the surrounding neighborhood. Based on the plan, the developer added four new streets to break up the physical and psychological isolation of the site—creating a more porous block-and-street pattern.

The old entrances were hidden and forbidding. New entrances are welcoming, prominent, and handicapped-accessible. Twelve two-story wings face the street in the perimeter of the block. One was converted to a community porch and the others are living spaces with large loft windows on all sides. Both porch and living spaces provide effective eyes on the street—making the surrounding street feel safer for residents.

Parallel parking was added for ease of access on the street, along with bike lanes to ensure a multimodal experience to visitors and residents.

All the former east-campus buildings are designated under the St. Elizabeths Hospital National Historic Landmark, and the grounds are also treated as a heritage asset. “The landscaping included exhaustive efforts to identify and preserve heritage cedar, oak, and southern magnolia trees (among others) that stand tall across the grounds,” notes Cunningham | Quill. “And as part of the approvals process, the new lawns include a network of rain gardens for onsite stormwater management.”

The buildings themselves were a challenge to renovate, especially given the few changes that were allowed to the general layout and façades. Dark, narrow corridors connecting the buildings are now light and open, filled with gathering areas such as TV lounges and meeting rooms. The buildings’ 5,000-plus original steel-framed single-pane windows were required to remain, so the renovation included openings that would accommodate storm windows to expand the units’ comfort and energy efficiency, according to the architects.

The redevelopment St. Elizabeths Hospital combines affordable housing, preservation, jobs at the new Sports and Entertainment Arena, and an attractive public realm. That combination means more people are likely to stay in Southeast DC instead of moving out to nearby Prince George's County, where transportation costs and driving would rise.