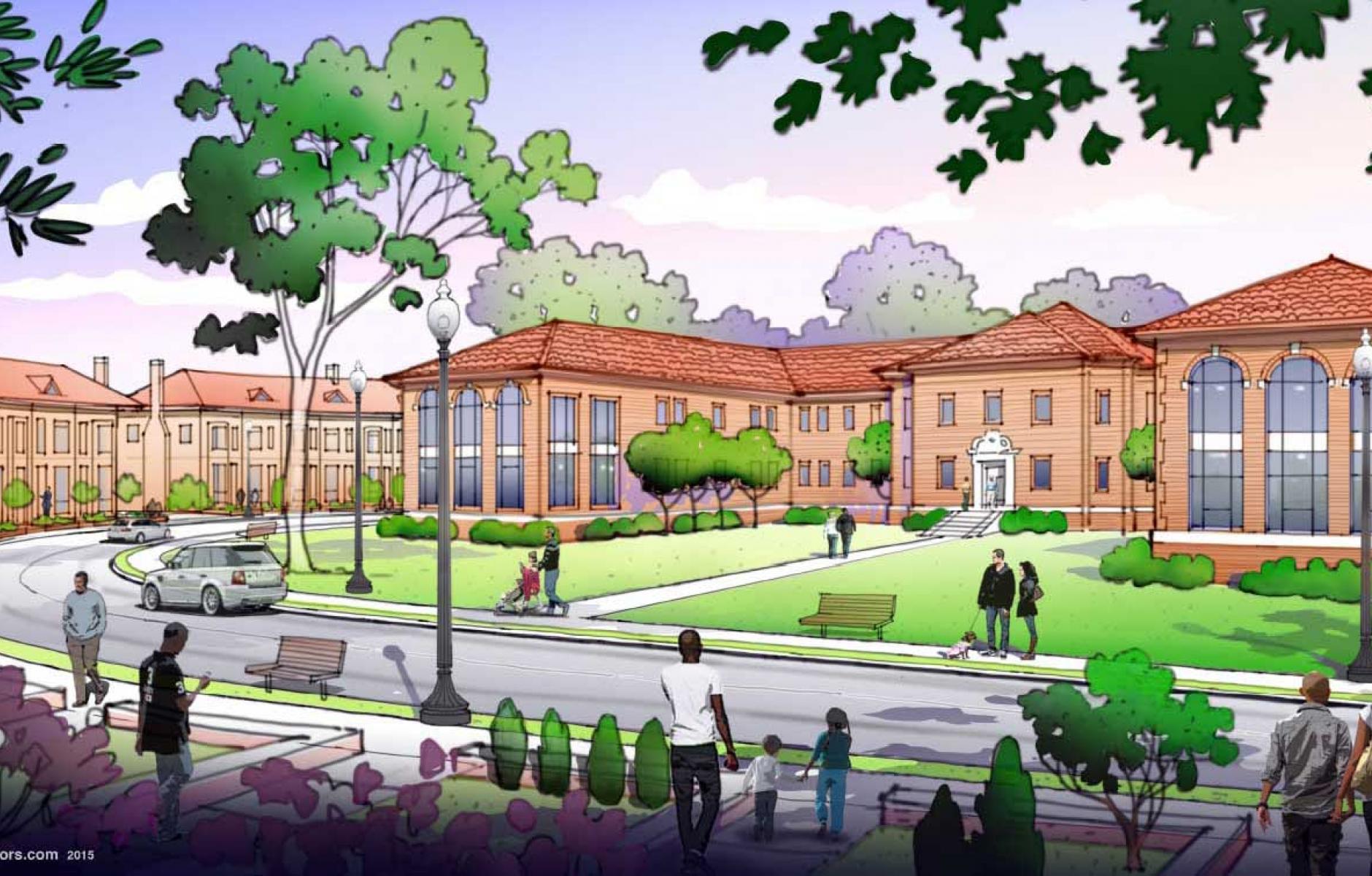 The rapid change in the District has fueled concerns that investment will leave existing residents high and dry, so the city is working with the community toward a better result.
ROBERT STEUTEVILLE   &nbspNOV. 20, 2017

The closure of St. Elizabeths, a federal mental hospital in southeast Washington DC, left a gaping hole in the urban fabric in the 1980s. For three decades the hole remained. Public confidence frayed as residents of nearby Congress Heights watched promises of redevelopment fall flat for a number of reasons, including the lack of a federal anchor tenant.

That was a tough time for the southeast, as DC was bleeding population and the sector of the city known as Anacostia suffered from low income and high crime.

But DC is now gaining a thousand new residents a month and the 183-acre city-owned eastern half of the historic hospital, next to the Congress Heights Metro station, is a prime redevelopment area in the early stage of construction. Benefits in the pipeline include:

The African American neighborhood is beset by high unemployment and poverty, yet it also benefits from a range of incomes and locally owned businesses. The key question is: “How do we bring the economic benefits of redevelopment while also thinking about the impacts on the residents and allowing them to participate in the process?” says Andrew Trueblood, chief of staff for the deputy mayor for planning and economic development.

The rapid pace of redevelopment and demographic change in the District has fueled concern that all this investment would result in widespread displacement in Congress Heights and generate few benefits for today's residents. This project is a case study in seeking equitable redevelopment. Building substantial new affordable housing and providing jobs means that more people are likely to stay instead of moving out to nearby Prince George's County—where they may fall into a poverty trap of rising transportation costs.

These issues were explored in The Rose Center for Public Leadership's Land Use Fellowship, a technical assistance program of the National League of Cities and Urban Land Institute. Four cities participate in the program annually, and DC just completed its fellowship. One goal of the redevelopment is to “recreate a vision of what DC looks like,” said deputy mayor Brian Kenner in a presentation October 26 at a Rose Fellowship retreat during the ULI Fall Meeting in Los Angeles. CNU was invited to help tell the story.

From campus to neighborhood

The first phase plan, by Cunningham Quill architects, divides the site into smaller blocks and preserves a number of historic low-rise red brick buildings. Because of the campus setting, some relatively large blocks will remain—but the emphasis is on human-scale streetscapes and pedestrian connections. The project will improve the “public realm” of an area that is lacking in the aesthetic qualities that are abundant in other parts of the District. The “permeability” of the site—making sure that it is accessible emotionally and psychologically to neighbors and visitors—is important to the redevelopment, Trueblood says.

The historic architecture will combine with modern buildings like the sports/entertainment arena for the Washington Mystics, a WNBA basketball team, including a world-class training facility for the NBA Wizards. The $55 million, 5,000-seat venue will host music and entertainment shows, attracting 400,000 to 600,000 people to Congress Heights—an area that few people have a reason to visit today. Many fans will arrive by Metro, which allows for less parking than would otherwise be the case. The sea of surface parking that normally accompanies an arena would severely impact the walkability of the neighborhood.

Set to open in 2018, the venue will bring jobs. Establishing “an efficient way to deliver workforce training and job placement services for present and future opportunities in Congress Heights,” is a top priority for residents and the project team.

The redevelopment will be active for the next decade of so, providing construction work. The goal is for some of these jobs to go to local residents. The target is 176 local workers in construction—to date 14 have been employed by four contractors. Coordinating that effort is Ward 8 Works—the name refers to the political ward for that part of the city—a partnership between nonprofits, contractors, and developers.

The first phase of housing is recently under way with 372 units. About two-thirds are multifamily, in renovated hospital buildings, and one-third are townhouses. More than 60 percent of the total are affordable—most to households under 60 percent of average median income for the district. Some will go to very poor households—under 30 percent of AMI. Phase one also includes about 180,000 square feet of office space and 30,000 square feet of retail near the Metro station.

The city has dedicated $100 million annually for the last three years to support affordable housing, and that commitment has begun to attract philanthropic interest. The Local Initiatives Support Corporation (LISC) has long been active in Anacostia, but has recently committed $50 million. Nationally, JP Morgan Chase and Citibank have also committed money, as are the local Meyer and Cafritz foundations. Kresge Foundation has launched the Crossing the Street Initiative to bring artists from other parts of the city for “creative placemaking.” There is also talk of establishing a Community Improvement District to manage long-term transportation, housing, and other issues in the new urban center around the Metro station, one of the key recommendations from the Rose Center's peer exchange panel visit last winter.

After a long dry spell for the site, the investment rains have come. A study completed in September 2017 identified St. Elizabeths as best site for a new full service hospital East of the Anacostia River, the team reported. That would bring a bucket of economic activity and permanent jobs to the area—including some that could go to current residents.

A historic chapel was converted to a meeting and conference space called the RISE Demonstration Center and the nearby Gateway Pavilion provides a space for outdoor entertainment. That and the sports venue, in vertical construction, are showing residents that the city is making good on its redevelopment promise. “They built two outstanding public facilities as the very first move,” says Gideon Berger, program director for the Rose Center's land use fellowship. “The community was very happy about that.”