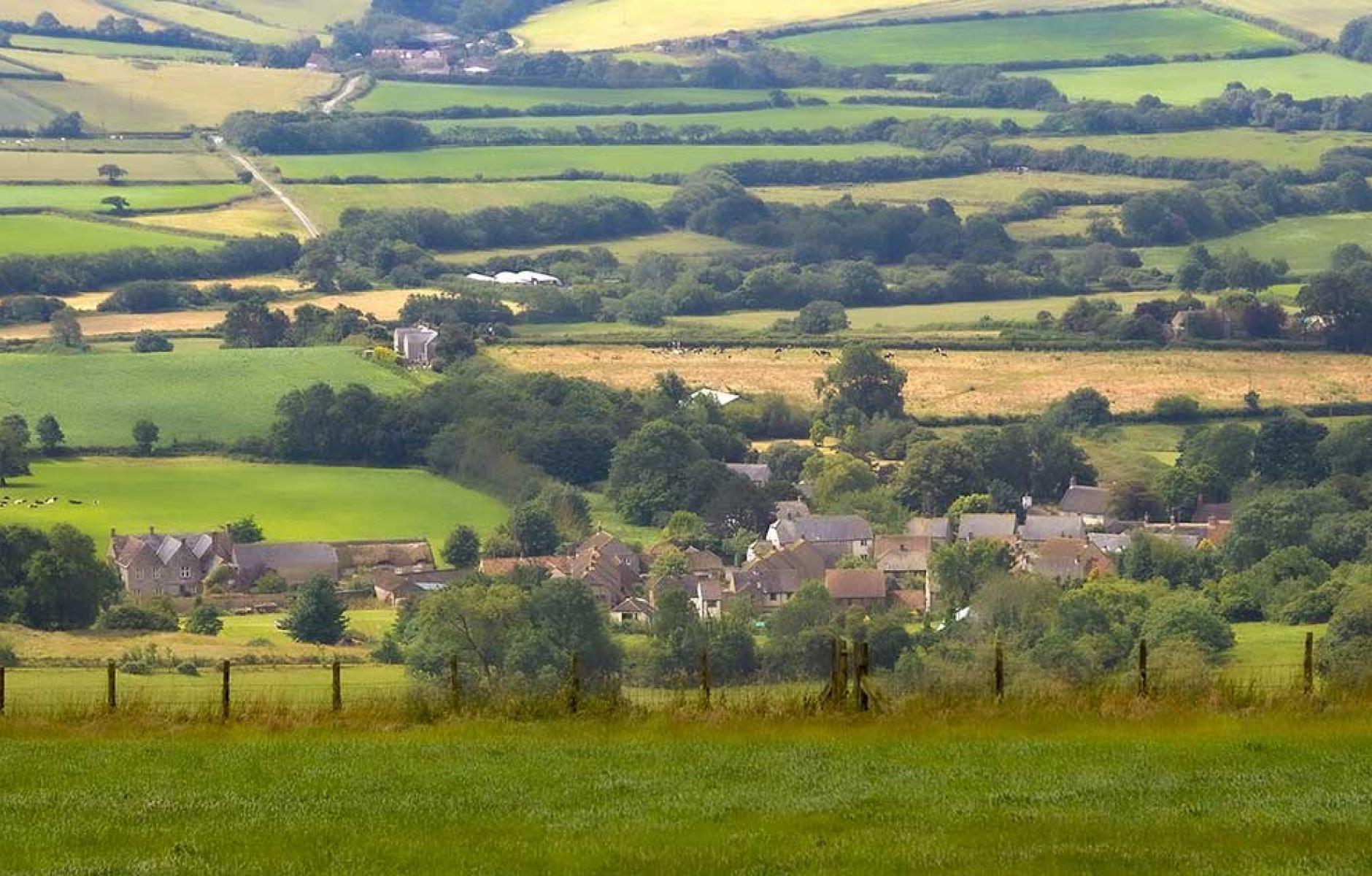 A hamlet in the countryside of Dorset, England. All photos by Steve Mouzon
Sustainability

Community types and growth in the post-Covid era

Cities and towns across the US and abroad are in financial crisis due to the pandemic, and some of the income generators on which they depended in recent decades may be permanently broken, but there are certain fundamentals of community survival and growth which are likely to continue long past these years, as they have track records proven over centuries. This post lays out the basics of community solvency and growth, and several posts looking at post-pandemic urbanism will be based on these fundamentals. Get these things right, and the recovery of your place will stand on proven foundations. These are the basic elements:

A community is a hamlet, village, town, or city standing free in the landscape or with suburbs (the fifth community type) at the perimeter. A metropolis is made up of many communities contiguous with each other. A community is made up of neighborhoods, large civic spaces, and special districts.

A neighborhood is the elemental building-block of urbanism. A neighborhood is a part of a community, but with the exception of the hamlet, a neighborhood does not make up the entire community. The majority of a city should be made up of neighborhoods, with special districts making up the remainder of the land area. A neighborhood contains at least three Transect zones, so there is a range of intensity in every neighborhood. A neighborhood also contains a mix of uses and is built compactly enough that neighbors can walk or bike to many if not most of their daily needs.

Most civic spaces are located within a neighborhood or special district, but civic spaces can occasionally be large enough that they form borders to the neighborhoods and districts around them. The Mall in Washington DC is an unusually large example of a large civic space.

A district is a contiguous area within a town or more often a city that, by its intrinsic function, disposition, or configuration, cannot conform to one of the normative Transect zones or community types. Districts can be either warranted or unwarranted. Unwarranted districts are usually sprawl land uses such as shopping malls or oﬃce parks, and contain components that should instead be incorporated into neighborhoods. Warranted districts include universities, airports, hospitals, rail yards, cemeteries, industrial districts, etc.

A hamlet is a community composed of one neighborhood standing free in the landscape. To be truly sustainable, hamlets should have a “raison d’être,” or “reason for being” tied to the land or water around them: most commonly, they were farm hamlets, but might also be built for fishing or other resource-based activities like (occasionally) hunting. Today, the term is most often used as a romantic description of sprawl, but that’s not what I mean by the use of the term. Because of its size, the hamlet cannot support any businesses patronized only by its residents, but it can support limited commercial if it’s good enough to draw people in from other hamlets and villages nearby.

Serenbe, in Georgia’s Chattahoochee Hills, has grown to four hamlets separated by nature preserve, but even when it was still a single hamlet, its foodie culture was already so strong that it drew people in from 10 miles around almost every day and all the way from Atlanta on the weekends to eat and shop there. The four hamlets today each have a specific focus: agriculture, the arts, health & wellness, and education. This highlights another necessity of sustainable hamlets: each should focus on one thing and invite people in from other hamlets to enjoy what you do well. Serenbe is arguably the best study of modern-day hamlets anywhere in America; it’s well worth your while to visit. As a matter of fact, Wanda and I would be happy to join you on the tour.

A village is a community composed of more than one neighborhood, but with a clear primary economy focus, such as a fishing village. Whereas residents of a hamlet usually take their products to market elsewhere, the village develops a nascent market where people can come from elsewhere to purchase products derived from the economic focus of the village. The village also has enough residents to support a range of businesses supplying daily needs to residents, and also to those outside the village when the services are good enough, as in the Serenbe example. Hamlets can grow into villages by adding neighborhoods.

Today, a multitude of people who can work remotely are considering relocating from more urban places to villages, towns, and smaller cities, with their perceived safety of smaller circles of contacts. But by doing so, they will be moving from places of greater cultural opportunties to quieter places, so these communities will have to deal with the balance between retaining their small-town character and becoming more interesting places. At the scale of a village, attracting a cohort which works remotely inherently creates a second economic focus of the village: one served not by natural resources like their first focus, but by high-speed connectivity which lets this second focus of remote work thrive.

A town is a community composed of several neighborhoods, and which is large enough to have developed more than one economic focus, although it still may be identified by its original focus, such as a textile town. The market of the town may have grown robust enough that it is now known as a market town instead, and its economic reach can pull in customers both from surrounding hamlets and villages. Or because a town is large enough to develop special districts, it may be known by the function of one of those districts, such as a university town. Villages grow into towns by adding neighborhoods, at least one additional economic focus and possibly a special district.
Towns should be able to add the economic focus of remote work more easily than villages, because towns have already diversified their economic bases. Because towns are naturally somewhat more diverse than villages, they may more easily welcome new arrivals than smaller communities.

A city is a community composed of many neighborhoods and several special districts, and which is large enough to have developed enough economic foci that it is no longer identified by any of them except in the most general terms, such as an industrial city or an economic center. Towns grow into cities by adding neighborhoods, special districts, and several new economic foci.
Cities have the greatest range of sizes, and small cities have special advantages when welcoming new arrivals from elsewhere within their region on two primary counts: they know how to do most of the things larger cities do, and they will feel most like home to those leaving larger cities. It is especially important to note that some of the most important urban thinkers (chiefly Leon Krier) have long made the case that cities can grow so large that they become fragile to many black swan events such as the pandemic. So, if this indeed turns into a great migration, it could actually end up being healthy for some of the largest cities once the initial pain is over.

A suburb is a community at the edge of a city. The motivation for suburb-founding can be varied, but is usually based on a desire to be diﬀerent from the city in some way, while still maintaining strong economic ties to the city. Those diﬀerences may be diﬀerences in management, economic foci, or a range of other motivations. Suburbs can be sustainable if composed of true neighborhoods as defined above and if connected to the city by a range of transportation choices primarily including various forms of transit.

In this election year, “suburb” is being used loosely and with no precision. Traditional suburbs can be some of the best places in the region to live and raise a family, with close-knit communities and thriving community institutions. Suburban sprawl, on the other hand, is a very different pattern of development and shares little with traditional suburbs other than the fact that both are outside the central city.

Suburbs built according to the patterns of sprawl and connected to the city primarily by automobiles are highly unsustainable and have arguably become America’s greatest challenge to economic health, environmental health, and public health. Suburban sprawl has the worst negative return on investment (ROI) of any settlement pattern in the history of the world. Charles Marohn of Strong Towns and Joe Minicozzi of Urban 3 have been exposing the broken economic foundations of sprawl for over a decade. Transforming suburban sprawl to sustainable suburbs through extreme makeovers will be America’s most pressing place-making mission of the upcoming decades. Several colleagues have brilliant proposals for how to fix the insolvent patterns of sprawl, and Wanda and I are working on a version we call Sprawl Recovery. Whatever it’s called, it begins with a commitment to building no more suburban sprawl.

Post-pandemic, sprawling places have the worst prognosis for being able to host remote workers long-term. Many in the new remote work multitude commuted into the city from sprawling bedroom communities before the pandemic struck. They had many cultural opportunities after work before heading home for the night. But exiled day and night at the end of a cul-de-sac is a very different proposition that most will likely find intolerable long-term. These are the people most likely to be shopping for real estate in a traditional suburb nearby. For these sprawling places, an extreme makeover may take on urgency years ahead of when it would have without the pandemic. Fortunately, there is a path from sprawl to sustainable traditional suburbs.