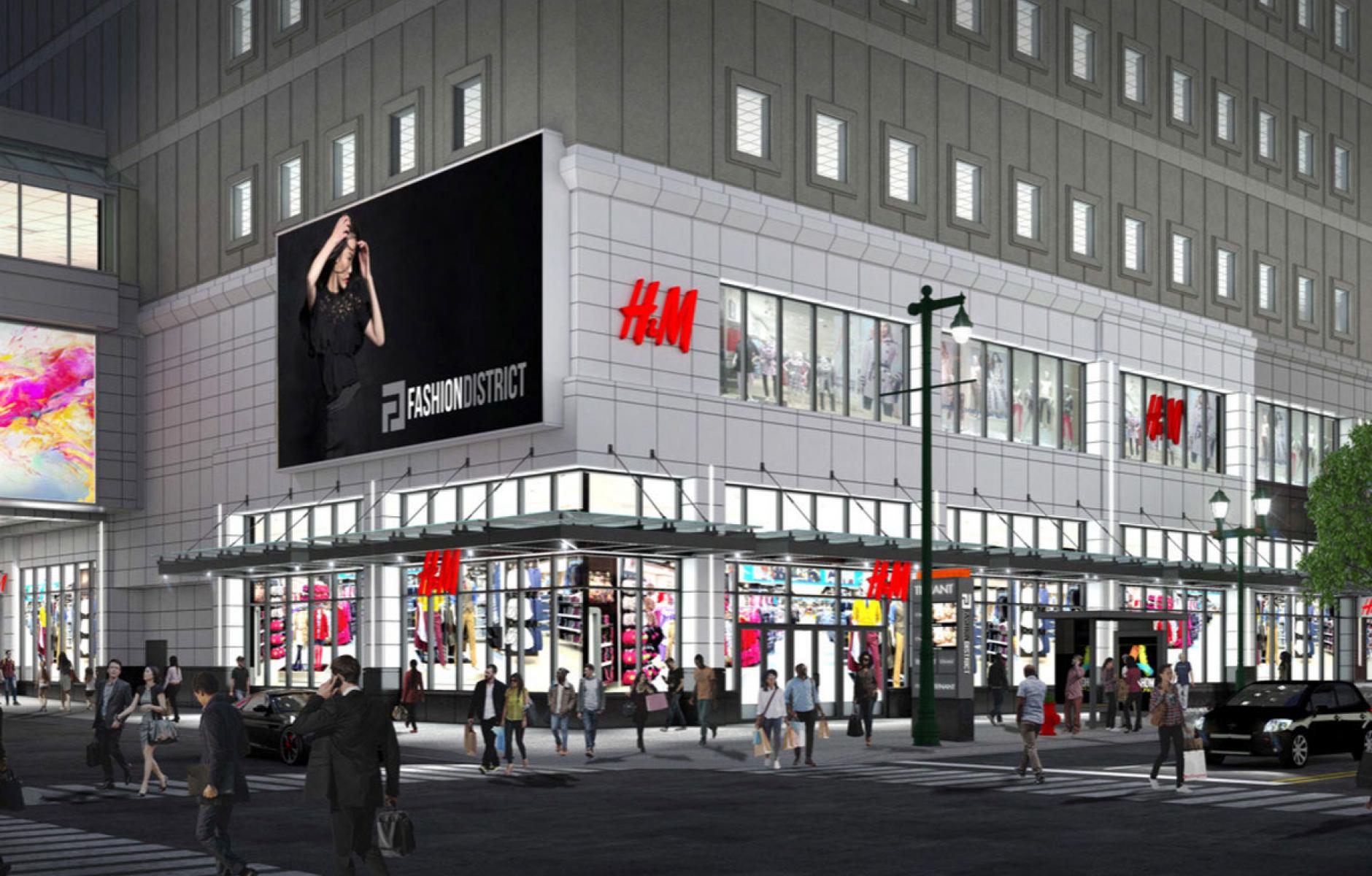 The Fashion District in Philadelphia, slated to open this month.
Markets

Why downtown retail is coming back

In 1964, British pop singer Petula Clark released Downtown, a number one hit in the US, celebrating the excitement and magnetism of city cores, “where everything’s waiting for you.”

Downtowns, unfortunately, were already heading into a multigenerational death spiral, and nowhere was this reality more apparent than retail sales, which decanted to malls and big box stores in the suburbs. In a few short decades, downtowns lost up to 90 percent of their retail market share.

Population also declined, especially the middle class and wealthy, a trend that has reversed in the last two decades. As downtowns and adjacent neighborhoods repopulate, their lack of retail represents a vacuum to be filled.

While America as a whole is vastly over-retailed, downtowns are under-retailed. They have as little as one-tenth of the retail per person as suburbs, says urban planner and retail expert Robert Gibbs. “Retailers have saturated the suburbs and the next underserved market is the inner cities. And they are also thinking that it will be a trend and growth market.”

The Fashion District in Philadelphia is the major US retail project opening this month, a test of whether brick-and-mortar stores can complete as an investment in the e-commerce era, according to the Commercial Observer. Yet the 838,000 square foot outward-facing mall, spanning three blocks on Center City’s East Market Street, is less a test of physical stores than it is a bellwether for urban retail.

Center City is gaining substantial population (close to 200,000, second only to Midtown Manhattan among downtown cores), and the demographics are changing toward professional millennials, the emerging Gen Z, and retiring Baby Boomers. Unless there is a major economic recession in the next few years, the Fashion District is poised to do very well. And, chances are, the Fashion District will draw shoppers regionally, benefiting other merchants in Center City, such as Macy’s—which runs a flagship store two blocks away—and Marshalls and TJ Maxx across the street. Early next year, an AMC multiplex cinema will open on East Market— another anchor, and an amenity that is surprisingly absent in a downtown of this size. Center City will once again be the dominant retail destination in a region of six million people, which hasn’t been the case since the 1960s. Cue Petula Clark, who is now 86 and still performing.

Just a few years ago, Detroit went through bankruptcy and was considered an urban basket-case, having lost a quarter of its population from 2000-2010. But downtown Detroit has experienced a renaissance this decade of jobs and population, and the mixed-use has followed. This spring the city gained an anchor in a 25,000 square foot H&M store, to join other well-known stores that have located along Woodward Avenue in recent years. H&M is occupying the ground floor of three historic buildings—a far cry from the 1990s, when national chains exclusively built stores and in malls and strip centers fronted by acres of parking. H&M, the second largest clothing retailer worldwide, is one of many top retailers that are opening stores in walkable urban locations with street-facing storefronts.

Target, the 8th largest US retailer, has pursued an urban strategy since 2016—and in the last three years nearly all of Target’s openings have been small-format urban stores in major cities and college towns. Target has increased its revenue, earnings, and assets every year since adopting this strategy.

As the media focuses on e-commerce and the “retail apocalypse”—widespread closures of name-brand stores like Sears, Bon-Ton, and Payless Shoes—the positive news of downtown retail has gotten comparatively little coverage. All of the experts on urban mixed-use that I have interviewed agree that downtowns are coming back, and that analysis is backed up by research and observation.

“Yes, there is demand for, and a return of, retail downtown—it’s not a fad” says Lee Sobel, a commercial real estate expert and program specialist with the US Department of Housing and Urban Development. Starting with the “creative class” and the rise of the knowledge economy, downtowns have become more competitive in the last two decades, he says. They were largely 9-5 p.m. business environments in the 1990s, and now they offer activity 18 hours a day with unique experiences and formats, such as food halls and pop-up spaces. “They fill niche, irregular spaces that are created from unusual circumstances that you don’t find in the suburbs,” Sobel says.

Walkable urban retail is growing and typically commands rent premiums, according to Foot Traffic Ahead: Ranking Walkable Urbanism in America’s Largest Metro Areas, 2019, by George Washington University School of Business and Smart Growth America. Since 2016, retail in regionally significant “walkable urban places” grew as a percentage of the total market in 21 of the top 30 metro areas, remained the same in 5, and declined in 4, according to Foot Traffic Ahead.

Even as chain stores close, urban places can gain retail, notes Sharon Woods of LandUseUSA | Urban Strategies, a market research and analysis firm. “If a 100,000 square foot building goes dark in a mall, 10,000 square feet can open up in a city center that is underserved and gaining population,” she says. “City centers used to be the centers for retail. There is an opportunity to recapture some of that role as retail is collapsing elsewhere.”

Kennedy Smith, an expert on Main Street economics, adds that “Whenever a major national retail chain announces that it is closing stores, “we immediately look to see where the stores are closing and alert clients that there is ‘x’ million square feet of unmet demand in their area.”

Getting an anchor store is key for cities, notes Gibbs. “Grocery stores are one of the best downtown retailers,” he says. “On average they increase regional sales 25 percent for all surrounding businesses. Department stores are the single best anchor for regional downtown shopping districts. They increase surrounding retail sales by about 35 percent and are responsible for about one-third of all visitors.”

Downtowns are not single-use strips

Downtowns and main streets are mixed-use places, and urban retail will be accompanied by many other kinds of storefront businesses—such as professional offices, salons and other services, entertainment venues, and even civic and not-for-profit uses. “Retail was never the major component of healthy downtowns—no more than 15-20 percent of square footage,” says Smith.

Downtowns tend to have a more diverse mix, and that includes more independent restaurants. There are 11 restaurant chains in the top 100 US retail corporations, totaling $135 billion in sales. With the exception of Starbucks, none of them can compete with the quality of food and service that independents provide in downtown locations—from street vendors to fine dining.

Downtowns typically have fewer national chains in general than suburban malls and big box power centers. “In vibrant hot downtowns, national chains are typically only 10 percent of overall retail composition,” says Smith. “They always gravitate to ‘100 percent’ corners, so people perceive chain stores to be occupying more space than there are.”

National chain stores can be beneficial to downtowns, she adds—they offer name brands that people recognize and they signal a level of economic performance that is reassuring to lenders and other businesses. Nevertheless, most of Smith’s clients are not looking for national retailers downtown—they want the “serendipity” of unique local businesses.

Downtowns come in various types and sizes. Not all of them are going to get a department store, or even a grocery store. “There are 29,000 towns and cities in US,” Smith says. “Not many main streets are sought out by national retailers. In a traditional downtown, what we need to plan for is two or three clusters of businesses. If you have that, you are creating visibility and driving in traffic.”

Racism is one reason for so little retail in cities, says Gibbs. “A lot of decision makers in the industry are biased against low-income minority families and think they don’t shop. If TJ Maxx is opening stores in the Detroit region, brokers will not show them downtown Detroit. They are redlined out.”

Downtowns have other challenges. One is ownership of buildings, frequently by “family trusts”—inheritors of wealth that may lack motivation to make to change. Retailers like Kohl’s or TJ Maxx require owners to invest substantial sums before they will locate in historic buildings, Gibbs says. “Many of the downtown property owners would rather get low rent than pay that $300,000 to prepare the building.”

Cities are sometimes their own enemies. Planning decisions over the years have hurt “shopability,” Gibbs says. “They have eliminated on-street parking and done a lot of basic things wrong. But the market is there for more downtown retail and a lot of retailers are realizing this.”

Yet downtowns have market advantages over new urban, mixed-use centers in the suburbs. “They offer history and placemaking and realness that a lot of people looking for,” Gibbs says. “But they don’t have a management advantage. They have multiple property owners and, often, bad parking.”

The hostility of planners and economic development directors to national retailers is also hurting downtowns, Gibbs says. “People want downtowns to be a theme park, and they go there for entertainment—to walk around and feel like you are in Mayberry. Then they do their shopping at the mall and online.

“When successful, downtowns sell goods and services that people need. Downtowns should return to that fundamental role, which they served in the 1950s.” Some cities have done just that, Gibbs says. In the Charleston, South Carolina, region, “King Street (on the historic Lower Peninsula) is the place to open a store. When Apple came into the market, they chose King Street over two malls. It has higher sales—it was a pure business decision.”

“While shopping centers are still a viable land use, a renewed interest in urban living, working, shopping and dining, has positioned downtowns … to reclaim market share and attract the amenities and development to improve the quality of life for the community,” Gibbs notes.