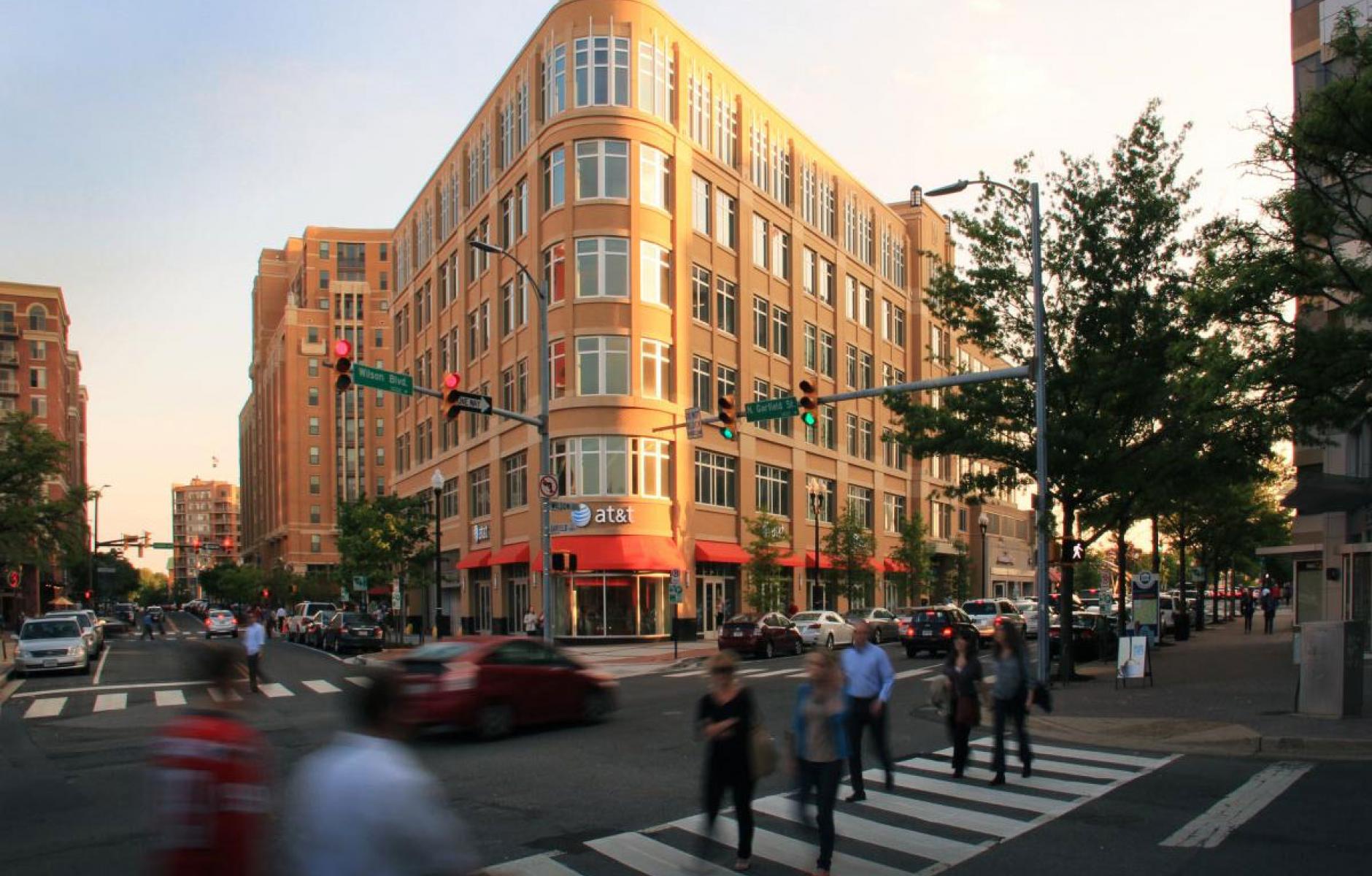 Our model for traffic congestion is flawed. We need to make the crucial distinction between good and bad congestion and plan our transportation systems accordingly.
ROBERT STEUTEVILLE   &nbspFEB. 6, 2019

A few years ago, after taking a blood test, my doctor told me I had a cholesterol problem. I wasn’t in immediate danger, but I started running regularly. After a year I returned for tests, and he told me the good news: My life expectancy had risen eight years. That was my best checkup ever. What had happened?

I can remember when doctors thought that all high cholesterol was bad. For the sake of the health of millions of people and for my lifestyle, thank goodness they made that distinction.

It seems, however, that traffic engineers and transportation planners are behind the curve. A few years back, former CNU president and CEO John Norquist wrote an article about “good congestion” and “bad congestion.” For more than a half century, the US and state governments have been waging a war against traffic congestion in general, spending billions of dollars to fight it through road widenings and new highways. This is fueled by an annual report, published by the Texas Transportation Institute (TTI) at Texas A&M, which generates a “congestion index” for each metro area. According to TTI, congestion is always bad, and it always costs money. When the TTI report comes out, it generates nationwide media coverage, and congestion is uniformly portrayed as bad.

Yet as Norquist reasonably points out, this assessment flies in the face of reality. Places that are healthy economically, that attract a lot of people, are often crowded. Cities that are dying economically—think Detroit in 2010—have very little congestion. A study last year by University of Colorado and Florida Atlantic University researchers found that, if anything, congestion has a positive impact on the health of cities. "Our findings suggest that a region’s economy is not significantly impacted by traffic congestion. In fact, the results even suggest a positive association between traffic congestion and economic productivity as well as jobs," explain authors Wes Marshall and Eric Dumbaugh.

The bottom line is we are terribly confused about congestion, kinda like doctors were confused about cholesterol, but the subject makes a lot more sense when you consider Norquist’s model. In this article I’ll take a closer look at bad congestion and good congestion, how to tell the difference between the two, and why our current efforts to fight congestion are failing.

Good congestion is a place where everybody wants to be. A beautiful main street or lively downtown are examples—and that place is typically full of people—pedestrians, cyclists, drivers, transit riders. You find good congestion in a great destination.

Bad congestion is a place that where you only want to get through—but you can't get through fast enough because of the congestion. Bad congestion often occurs in miserable places to be—like a beltway or major arterial road lined with strips malls and big box stores.

One easy way to tell the difference between good congestion and bad is to look around. Are there lots of people on foot? Do you see bicyclists on the street? Is the transit service frequent and mode share high? Then you probably have good congestion, because good congestion involves people outside of cars. The best congestion can be found when people are hardly moving at all. People are so happy to be in a particular location they are hanging around for the joy of it. Well-occupied outdoor café tables and park benches are top indicators of good congestion. People talk, buy food from a vender, maybe somebody plays guitar on the side of the best congested streets. The faces your see have purpose and animation—which means they are making connections, doing something meaningful in their lives.

Conversely, if the street is full of cars but nobody is around outside of cars, you’ve got bad congestion. Bad congestion is a joyless condition. Faces are resigned, frustrated, frowning. Hands gripping steering wheels. 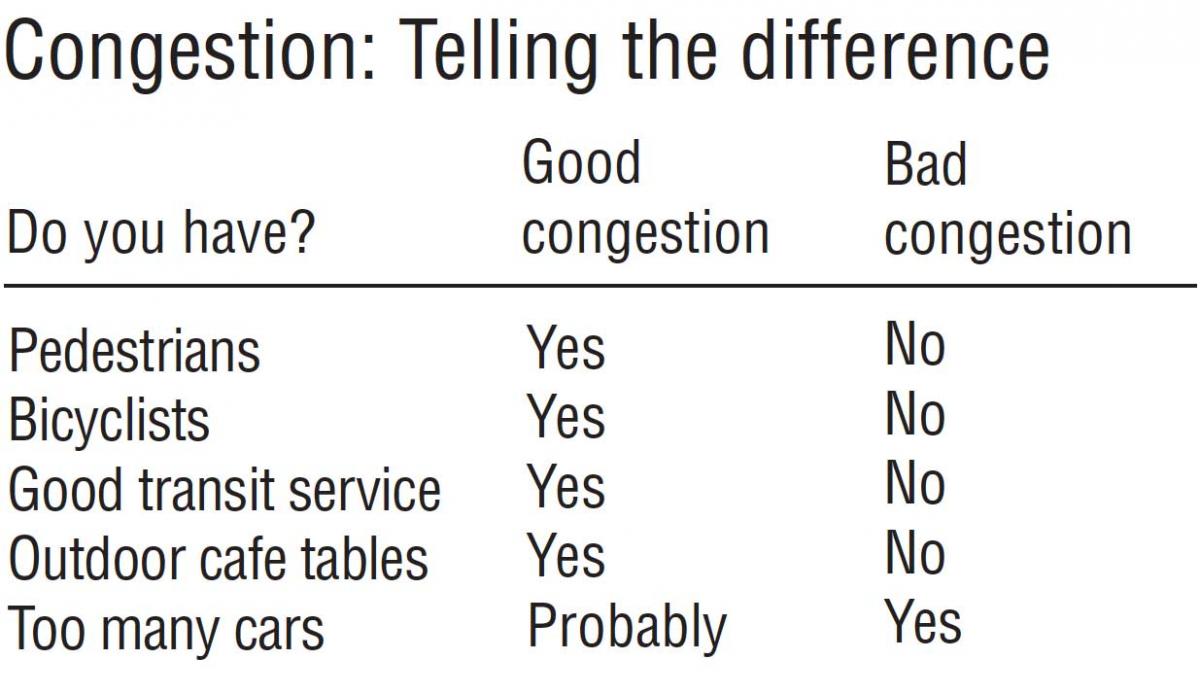 Where good congestion is needed

There are two really important points here. One is that, like cholesterol, it is just as important for a city to increase its good congestion as it is to lower its bad congestion. If anything, it is more important to do the former. Second, there are places where you expect to find good congestion. If your downtown has no congestion, your city is in serious trouble. Neighborhood commercial centers also need a certain amount of good congestion to be healthy. If you are looking to eliminate congestion in either of these places, you are working at cross-purposes with the health of your city or town.

The last item on the table above is a sticking point—too many cars. Bad congestion definitely has too many cars because without that, the place wouldn’t be congested at all. Good congestion probably has too many cars—at least at certain times during the day—because that’s the world we live in. If people are attracted to a great place—if there are jobs, lots of residents, and visitors seeking shopping, entertainment, and a unique experience—a certain number of people will drive.

1) Make sure your city has good connectivity in the street network. The more connectivity, the more choices that drivers have to get around traffic bottlenecks at busy times during the day. Good connectivity will disperse traffic rather than concentrate it. It also allows for smaller streets, which reduce traffic speeds and makes streets safer. Slow-speed traffic is compatible with good congestion. Turning one-way streets into two-way streets when possible will increase connectivity. Whenever you do that, you double the connections and choices.

2) Put a lid on off-street parking. The conventional way to deal with traffic downtown is to use it to justify more parking. This is wrong. More parking will add to traffic, and if it is designed poorly, it will lower good congestion by damaging streetscapes. The first step is to eliminate minimum off-street parking requirements. Some cities are going further and adopting parking maximums.

4) Consider restricting Uber and Lyft in certain parts of cities, putting a maximum on the number of drivers in given areas. No cities have tried this, but I don’t see why they shouldn’t. Private Internet-based taxi services are significantly adding to congestion, and not in a good way, in major city downtowns. These services also reduce transit ridership. They are currently operating at a loss, trying to maximize their share of the transportation pie. Cities should consider restricting Uber and Lyft to levels that do not add to traffic congestion, a policy that would promote more transit use, walking, and bicycling. That would increase the good congestion. Seriously, what harm would it do to restrict Uber and Lyft in places where people already have a wide range of transportation choices?

5) Improve the transit system. More opportunities for frequent transit will give people a choice in how to get around, and they won’t have to be stuck in traffic, even if there are too many cars.

6) Consider congestion pricing in the busiest downtowns by charging a fee for drivers to enter downtown at the busiest times of the day.

Notice that all of these strategies tend to support people outside of cars—even as they mitigate the impact of cars on the road.

What to do about bad congestion

Bad congestion is entirely different from good congestion, and it is always a problem. The conventional traffic engineering wisdom is to add to road capacity. But that’s not the only strategy, and it may not be the best one.

2) Improve the connections in the street network. A root cause of bad congestion is that traffic in suburban places is funneled on to a few arterial roads. When that is the case, new connections are needed and that can be accomplished by breaking up superblocks into smaller blocks that can disperse traffic.

3) Use roundabouts to eliminate traffic signals and slow down traffic. When converting bad congestion to good congestion, this tactic is a win-win. In order to make a place appealing and safe for pedestrians, traffic must slow down. But if traffic can move steadily without lengthy delays due to multi-phase traffic signals, the frustration of drivers goes way down.

4) Narrow the travel lanes. That’s another win-win. Most places with bad congestion have wide travel lanes, often at or exceeding 12 feet, which is the standard for Interstate highways. This width encourages fast-moving traffic (when the traffic can move at all), which is deadly for pedestrians. Lanes of 10 feet can handle the same amount of traffic at safer speeds, while providing more room for pedestrians and bicyclists.

5) Change the land-use regulations to allow flexible-use urban buildings on both sides of the thoroughfare. That will narrow the perceived width of the roadway, slowing down traffic, and also bring in more pedestrians.

6) Get creative. Sometimes reducing redundant asphalt and changing the geometries of intersections can improve the pedestrian experience without negatively affecting traffic flow.

8)  Only in places that are never intended to be walkable should we consider widening roads and building highways. Even in these places another, perhaps better, option is to first improve connectivity to disperse traffic.

All of these steps are not necessary in every city, rather these are menu lists of potential techniques—kinda like diet changes, exercise, and drugs for cholesterol. The particular prescription should be unique to every city, addressing the type of congestion.

Our current understanding of traffic congestion is primitive and crude, and doesn’t allow for accurate diagnosis of the problem. We are spending tens of billions of dollars annually to cure a problem that we cannot diagnose in the first place, guaranteeing that we are going to waste a good deal of that money.

The main idea is to understand the problem. Congestion is not inherently bad. Some of it is bad, but some of it is absolutely necessary for the health of cities. We need to communicate the difference between good and bad congestion to the public. The TTI congestion index needs to be reformed, or taken with a big grain of salt. We need to accurately identify the two kinds of congestion within metro areas. Simply saying a metro area is congested does very little good. Finally, we need to employ the appropriate strategies to deal with each kind of congestion—the good and the bad—and take that opportunity to spend our transportation dollars more wisely.