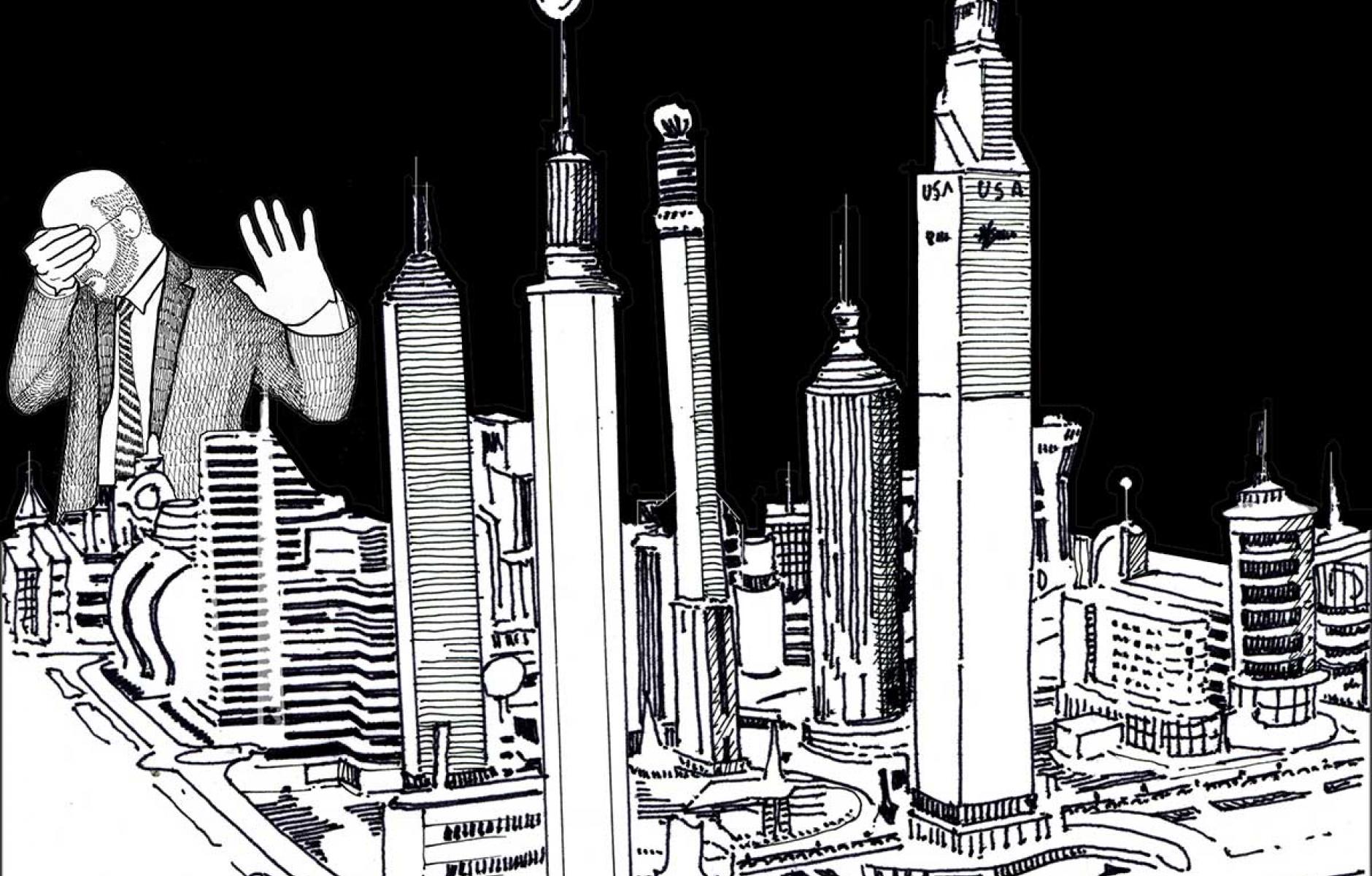 Drawings by Dhiru Thadani
Got A Minute

An exhibit promotes a discordant, unsustainable model for growth in the developing world—but we have an opportunity to do better.
DHIRU THADANI   &nbspAUG. 24, 2018

A constant debate within the CNU revolves around the height of buildings.

Léon Krier has emphatically stated that buildings in villages, towns, or cities should not be higher than four stories. He notes that low-rise structures are sustainable as they can function solely on human energy without the consumption of fossil fuels. He observes that, universally, Homo sapiens prefer low-rise places for vacation, where human scale and walkability prevail. He reserves the use of non-utilitarian towers to mark terminated vistas, denote civic importance, and compositionally interrupt the horizontal. Krier’s low-rise proposition reinforces Jane Jacobs’ essential construct that living within shouting distance of the street is preferable, for a host of reasons. 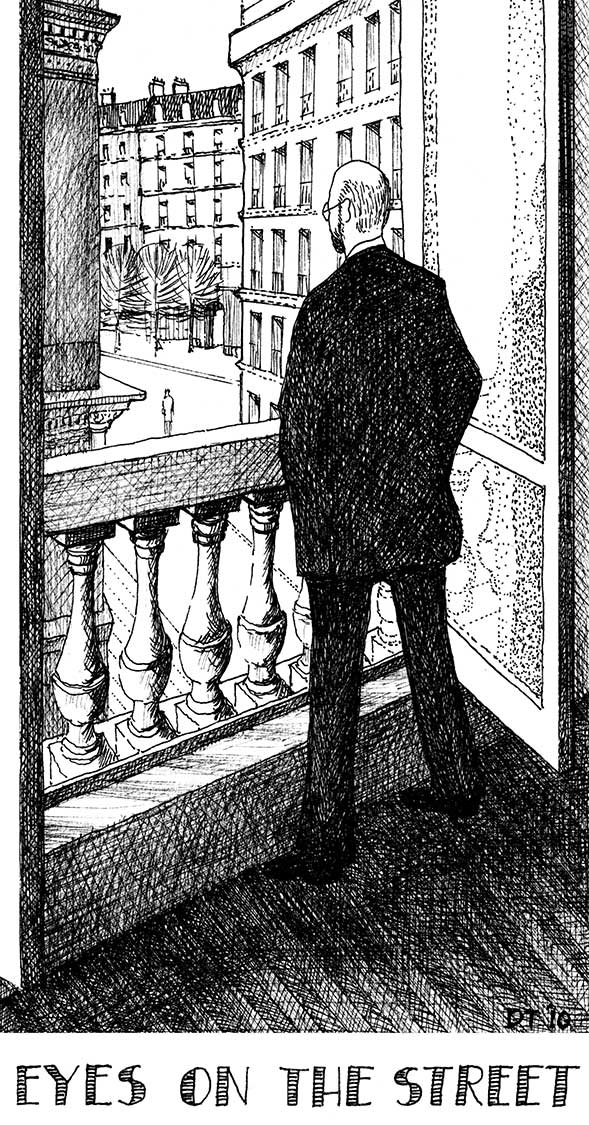 Peter Calthorpe takes the position that high-rise buildings are a viable form, consuming less land while addressing the burgeoning global population.  Furthermore, they provide the necessary density to support robust transit systems for a sustainable future. He proposes that residential and commercial towers be architecturally tamed at street level to address issues of scale, and walkability can be achieved within this urban form.

Both positions have merit and the debate is constructive in understanding the nuances and direction toward a sustainable future.

On a recent visit to New York City I found myself at the Museum of Modern Art (MOMA). Intrigued by an exhibit’s name, City Dreams, I wandered into the gallery to view the work of Bodys Isek Kingelez, an artist who resided in the Republic of Congo. The show consisted of models made from everyday materials and found objects—fastidiously crafted and re-purposed to depict imaginary buildings within imagined cities.

In his work, the visionary artist extolled the virtue of making scale models as an integral guide to future development. He stated, “Without a model, you are nowhere. A nation that can’t make models is a nation that doesn’t understand things, a nation that doesn’t live.” The selling of an architectural vision through the use of models places preference on the aerial view or ‘God’ view versus the inhabitants’ perspective on ground level. Jan Gehl points out that not every citizen has a helicopter to appreciate the aerial composition of their town or city. 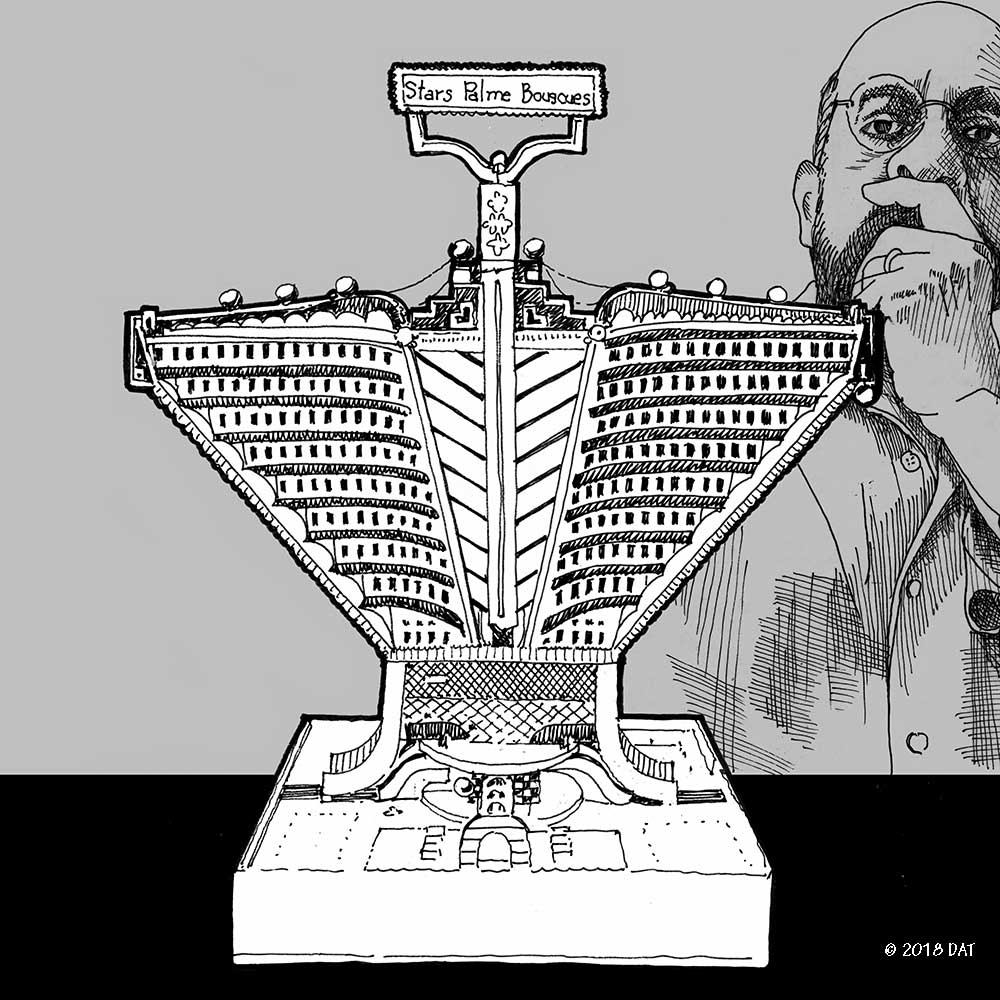 Kingelez’s imagined cities consisted of fanciful skyscrapers which display extreme exuberance in their form and color.  It was clear that the artist had embraced tall structures, communicating his belief that future cities in the African continent be made up of these over-scaled objects, with preference given to agitated forms, each structure an entity unto itself. The building models in the show did not complement each other, the sum of parts failing to make a greater whole. The overall effect was discordance—a magnified equivalent to the 1970s observations and critiques of the Las Vegas Strip by Venturi, Scott-Brown, and Izenour, and all too evident in American suburban commercial strips.

On an urban level, the assemblages were devoid of regional context, visible hierarchy, civic realm, and urban taxonomy such as blocks and thoroughfares — failing to make the essential component of urbanism — the neighborhood.  No distinctions between public and private realms were visible, except for signage that usually crowned the structures.  The resultant ensembles displayed a lack of understanding of urban form, and the consequent chaos was antithetical to what the artist hoped to achieve regarding social equity and rehabilitation. 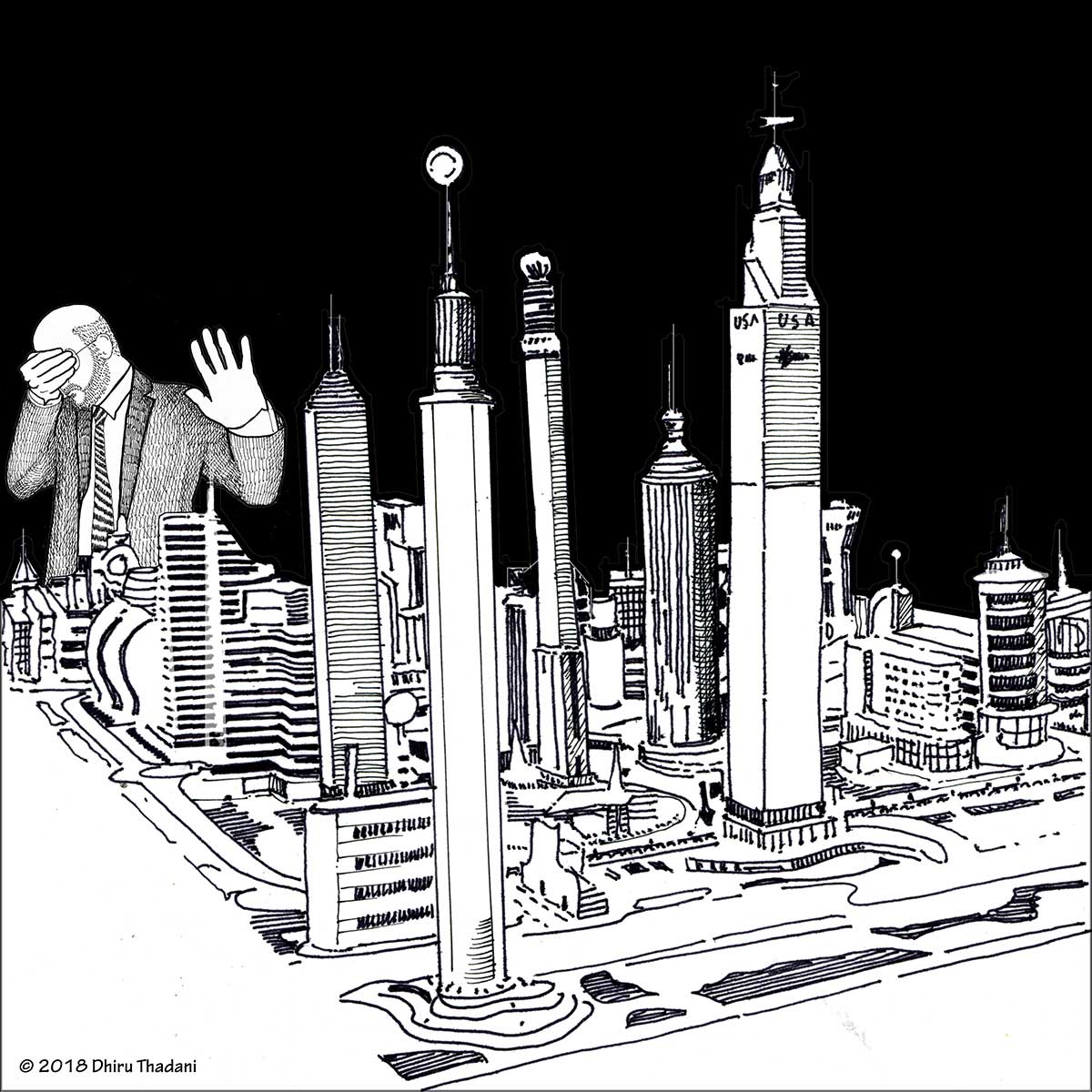 One could argue that Kingelez was an artist and he did not need to acknowledge the lexicon of urban design to make his art.  However, art that is on display is in a position to influence future thought, especially if it carries the endorsement of MOMA, which places it in a privileged category.  MOMA deserves credit for bringing this extensive exhibit by an African artist to the US.  However, it elucidates the ignorance of the museum curators in their selection of art that represents an unsustainable future.

The exhibition exemplifies the misguided and misinformed preference that prevails in the developing world to emulate the West at a hyper-scale.  These countries universally share an inferiority complex of appearing backward.  Their solution is to create an illusion that appears advanced by making hyper-facsimile versions of buildings that exist in first-world countries.  The drive to create this image is so powerful that functionality, sustainability, economics, local culture, traditions, and human beings are completely ignored.

Case-in-point—the tallest building in the world, built in Dubai, was constructed without sewer infrastructure, resulting in mile-long caravans of sewer trucks carrying waste in the darkness of night to a treatment facility somewhere in the desert. Unfortunately there are many such examples, yet the absurdity goes on, with politicians, planning administrators, financiers, architects, and planners complicit in the ridiculous goal to appear as an advanced nation. 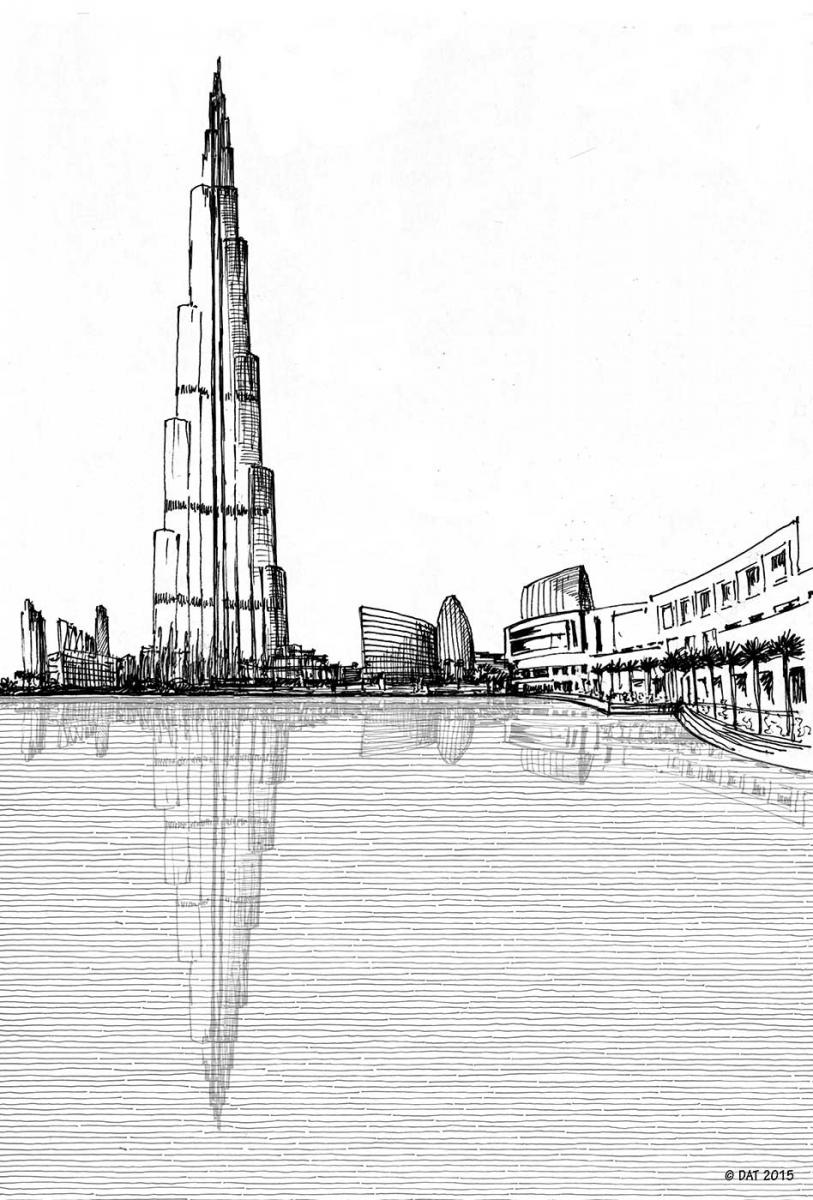 Countering low self-esteem with hubris is not limited to developing countries. In the US, Cleveland’s Terminal Tower was the second tallest building in the world when completed in 1930. The city’s master plan, prepared in the 1980s, allocated sites for high-rise buildings to promote the city’s image as a growing metropolis. In 1991 César Pelli’s Key Tower surpassed the Terminal building in height and added 1.5 million square feet of office space within the single building. Twenty-seven years later there continues to be several vacant city blocks in view of these two high-rise structures. In hind sight, Cleveland’s entire downtown could have incrementally been built-out with mixed-use buildings, had the city chosen to distribute the built-space rather than concentrate it in one tall structure. 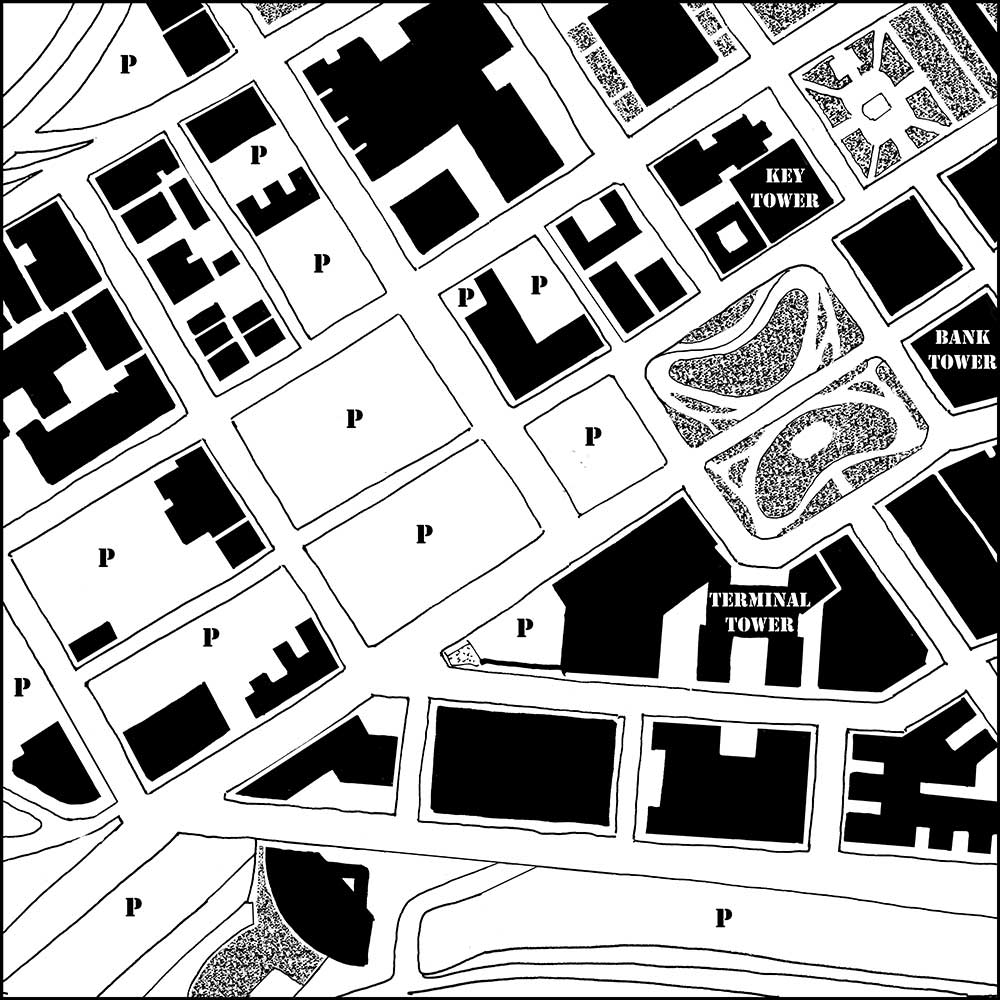 Urbanism is a slow movement that takes time to mature to a satisfactory quality-of-life state. Similar to growing a tree, it is dependent on location, climate, environment, and nurturing. This is contrary to what decision-makers and financial institutions desire. They want quick results and instant gratification to show off their investment, and a photo-opportunity to convince their constituents that change and progress is underway. This conflict has always existed no matter what the urban form chosen is—low- or high-rise.

At the rapid rate of unsustainable growth in developing and developed nations, mankind is accelerating toward the extinction of the human species.  Humans are the only known species that willfully makes decisions that will lead to their own extinction. Cultural and academic institutions are in a position to educate and influence their constituencies to the realities of the effects of climate change and what that means to food security, as the world’s population increases by two billion inhabitants in the next three decades.

Developing nations have the opportunity to leapfrog toward sustainable urban forms without repeating the land use errors made by so-called developed nations. The argument made by developing nations to relax enforcement of CO2 emissions, permitting them to pollute, so they can catch up economically to the developed nations, is ill-considered reasoning. If permitted to do so, there will be no humanity remaining to enjoy the economic spoils that they hope to achieve.