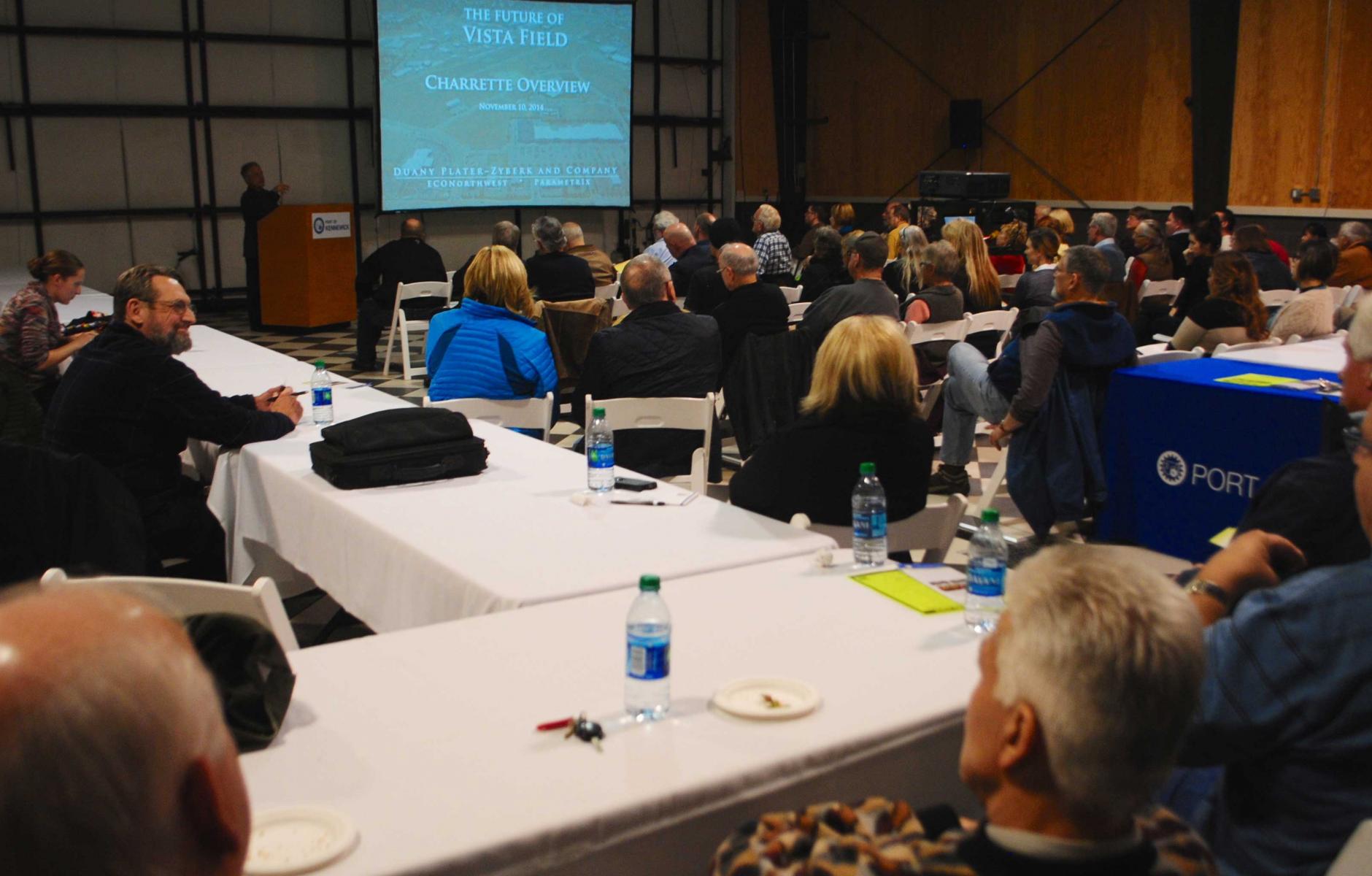 A charrette presentation in Kennewick, Washington, a conservative region. The charrette brought together Republicans, Democrats, Independents, ethnic minorities, civic and religious groups to collaborate effectively on a shared vision.
Community

All politics is local—and to that we could add, all politics is rooted in the public spaces we share at the local level.
MICHAEL MEHAFFY   &nbspFEB. 20, 2017

American new urbanists are famously cross-partisan. Former CNU president John Norquist was a Democratic mayor of Milwaukee Wisconsin, and former board member Mike Krusee was a Republican Texas legislator. You can find a New Urbanism page on The American Conservative website, and another one on The Huffington Post – and similar materials on lots of other sites across the political spectrum. You can find university professors with self-described leftist preferences at CNU conferences, and they could be discussing – and agreeing with – a noted white paper on New Urbanism co-authored by Andres Duany and two icons of the American right, Paul Weyrich and William S. Lind. And you can find fiercely independent voices too, not so easily categorized in the usual left and right frames.

Given the divisive nature of the last year in American politics, it bears asking: how do all these folks get along? What is it about urbanism that seems to allow people to cut past often hostile partisan divisions? How are they able to discuss openly, and work together on, common ideas about how to make their neighborhoods and towns and cities into better places?

Just now, these questions are starting to look increasingly important, even urgent. Bitter divisions over "identity politics," urban versus rural, and "the experts" versus everyone else, are making it seem increasingly unlikely that people can come together and respond effectively to shared challenges. It’s getting harder to agree on common ways forward to develop our economies, protect our natural resources, and improve our health and quality of life. Whatever your perspective, that’s not an acceptable state of affairs.

Intriguingly though, something changes when it comes to our neighborhoods, towns and cities. Somehow, when people have tangible, shareable public spaces – places – to work on, ideological divisions often give way to pragmatism. In the communities where I and other new urbanists work, we have witnessed time and again how people can come together across partisan, religious, ethnic, economic and other divisions, and work together toward local quality of life goals. When conditions are right, something about the local and tangible nature of the work seems to foster this pragmatic collaboration.

Of course we sometimes see challenges from fervently ideological groups on both extremes of the political spectrum. But these groups are typically outsiders to our project areas, and they are usually shadow-boxing with abstract "identity politics" bogeymen. The dynamics change when real local people discuss, face to face, what they all want out of their own real local places. And that’s a very hopeful thing.

All politics is local, as Tip O’Neill famously said, and to that we could add, all politics is rooted in the public spaces we share at the local level. I can see this on a personal level, as a newly elected president of my local neighborhood association in Portland, Oregon. We deal with lots of public space concerns, small and large – on-street parking problems, trees getting cut down in front yards, steps getting added to connect streets, smaller and bigger development projects and their impacts on public spaces, and so on.

In Portland, Oregon, where I live, neighborhood associations function as quasi-governmental bodies, in what amounts to a remarkable laboratory for neighborhood-based governance and "subsidiarity." We do have divisions, but they are largely between levels, and not within a local level. Sometimes (and more so lately) they are battles between larger special interests and local neighborhoods—the former seeking to subvert and weaken grass roots power. But the neighborhood associations themselves often prove remarkably united.

This kind of "governance" (as opposed to government) is starting to look incredibly important. After all, the critical failures of our age are failures to manage our civic commons – our common planet, its resources and ecologies, and our common cities, towns and neighborhoods.

Those are exactly the issues that New Urbanism was intended to take on. It does so most effectively when the issues are concrete, and the benefits on offer are tangible. It does so less effectively when the issues are abstract, and the prospects are defined negatively. ("If you don’t accept higher density or higher traffic congestion, climate change will get you!") That’s an important lesson when dealing with real and negative issues like climate change, resource depletion and ecological destruction–but also positive issues like human development, economic opportunity and quality of life. It’s all connected–and moreover, connected to positive, tangible, local interests. That’s the fulcrum we need to apply in our work.

In that work we need to continue to be leaders in innovation, recognizing the innovations in other fields from which we can draw. As an important example, in the last few years, very hopeful innovations have been occurring around open-source technology, and we’ve seen the impressive rise of powerful commons-based resources like Wikipedia and the Linux operating system. They offer important lessons on how it’s possible to manage a commons collectively, to curate it, and to improve it over time. We need not necessarily be the victims of "the Tragedy of the Commons"—the destruction of our common resources by short-term processes and the exercise of irresponsible self-interest. There’s an important lesson here also for how political communities work, or don’t work.

In parallel efforts, the new urbanists have also been innovating with open-source tools, developing a number of resources to allow people to work together on their local zoning codes, traffic manuals, toolkits for small-scale developers, shareable "tactical urbanism" strategies, and the like. Nathan Norris is compiling many of these innovative tools for the CNU, and new work is continuing on other fronts. People like Bruce Donnelly have begun to draw lessons from innovations like "Platform Cooperativism," frameworks for innovation developed by people like Yochai Benkler of Harvard, Trebor Scholz of the New School, and others. Platform cooperativism is an agreement to maintain a commons (like Wikimedia Commons, a great example) that allows collaborators to work on a shared resource that will grow in value, and provide increasing benefits for its sharers over time.

In a larger sense, urbanism itself is the ultimate example of "platform cooperativism"— the civic structure we share and modify together, at many polycentric scales. And at the heart of urbanism is public space, the shared commons that is the essential framework of cities and towns. It is in public spaces that we meet, interact, form our plans, and develop opportunities with one another. As Jane Jacobs reminded us, public space is the beating heart of an urban economy, right down to the sidewalk interactions that are "the small change from which the wealth of public life may grow."

Increasingly, it appears that the healthy growth of economies will depend on well-connected networks of public space, accessible to all. It is critical, in this age of rapid urbanization, that we continue to curate and nurture this vital urban commons, and continue to develop and disseminate the tools and strategies to do so.

This is why the work of the new urbanists is important, and ought to be recognized and engaged by other communities – whatever their disagreements, which should of course be discussed. By the same token, new urbanists ought to do more to engage these other communities, including the open source development community and others. The time to snipe from silos of whatever kind is over.

Just now, urbanists around the world, from varied backgrounds and ideologies, have come together to implement the just-approved "New Urban Agenda," an outcome of the UN’s Habitat III conference last October. There is much in the New Urban Agenda that American (and other) new urbanists can applaud, including an emphasis on mixed use, walkable street networks, diversity, transportation choices – and the central importance of public space systems. Joan Clos, the Secretary-General of Habitat III, said that without public space, we simply don’t have cities and towns. We have mere collections of buildings and vehicles.

Worse, we have an increasingly unsustainable global system, causing increasingly untenable global problems: declining middle class opportunities, increasing wealth inequality, resource depletion, ecological failures, ethnic conflicts, and more. It is not surprising that these problems manifest now in an increasing spiral of geopolitical unrest. And it is not a coincidence that the growth of these problems has come with the decline of urbanism – which is to say, the decline of public space, in the face of privatization, fragmentation, sprawl, and all the related things we seek to combat.

In this context, it is imperative that we accelerate our efforts to bridge divisions, and find the shared platforms to improve the lives and opportunities of people in cities, towns and neighborhoods all over the world. We can do so with a positive vision for the future, applying the hopeful findings of new research, and confirming the remarkable insights of Jacobs and others. Today we understand more than ever, that this public space in cities and towns–this urbanism–does indeed hold the remarkable and unifying promise of a better life for all.