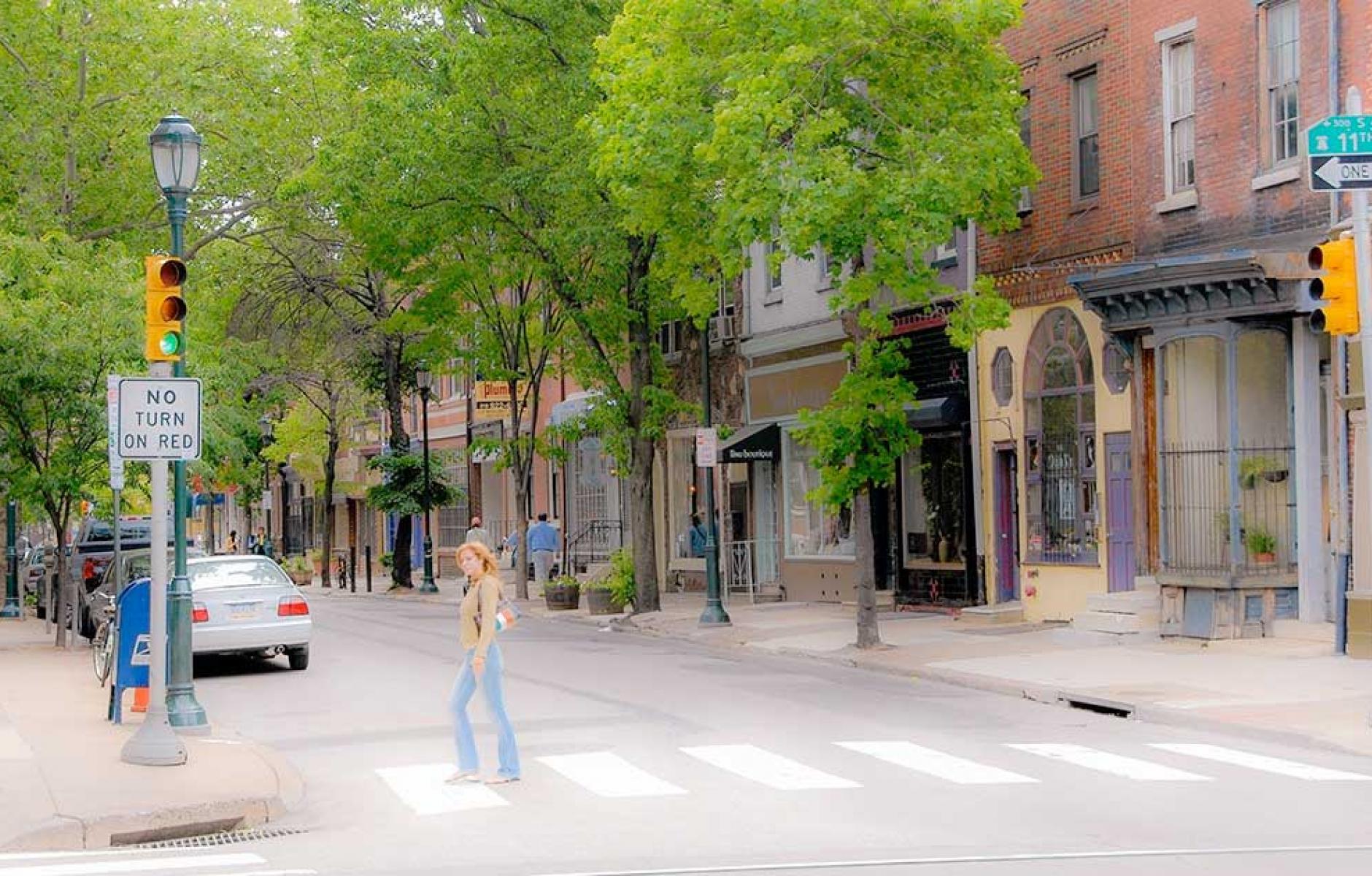 Trees should be planted either in swales (on primarily residentail streets) or in tree wells (on Main Streets). Do not listen to “urban foresters,” who insist that trees must be planted in landscape beds large enough for their mature drip lines.
STEVE MOUZON   &nbspDEC. 19, 2016

Street trees are essential for strong Walk Appeal almost anywhere in the US, which makes them a fundamental part of the public frontage, which extends from the property line to the edge of the street. We’ll talk about other public frontage parts later, but street trees are so important that they warrant their own discussion. Two things will be apparent when we look at street trees and other public frontage parts: First, none of this is rocket science; simple rules of thumb cover most of these parts. On the other hand, it’s shocking how often a city, a Department of Transportation, or a developer gets them wrong… so do what you can to get people informed in your city or town.

Why should we plant street trees?

There are many reasons to plant street trees (most of which will be in a later post), but the two most obvious ones are closely intertwined: Walk Appeal and sustainability. In most of the US, a street without trees is a street where people rarely walk, and therefore almost always drive. This is bad for our towns, our wallets, and our waistlines.

If you’re not in a US state with a Canadian border, you really need street trees to shade the sidewalk. And if you’re North of New Orleans, those street trees should be be deciduous so they drop their leaves in winter so you can walk in the relative warmth of a winter sun. From New Orleans southward, shade is helpful throughout the year because it can be warm throughout most days of the year.

The type of street tree varies according to where you are in town. Along a Main Street, trees should be taller and more vertically-proportioned, so that when they’re mature, their lowest branches are 12-16 feet above the sidewalk so they don’t block business signs. Also, Main Street buildings typically pull right up to the street, so trees that are more vertically-proportioned don’t grow so hard up against the upper levels of the Main Street buildings. On a primarily residential street, the trees can be lower and spread more broadly because the buildings (mostly houses) are set further back from the street. The lowest branches only need to be a bit above the head height of a tall person.

Street trees should be planted roughly every 15-30 feet along a Main Street and every 25-50 feet along a primarily residential street. Start by planting a street tree at every property line. If the Main Street shops are really narrow (less than 15 feet wide) plant the trees on every other property line. If they’re really wide (more than 30 feet wide), plant the trees every 20 feet or so, but don’t plant them in front of the shops’ front doors. If you do, some shop-owners will sneak out at night and poison the trees.

The Florida DOT had no clue about this basic rule when they rebuilt Alton Road on South Beach, so this is exactly what happened again and again. It’s a lose-lose deal for the business owners, because while killing the trees keeps their signs more visible, the sunburned sidewalks are not a place most people want to walk for most of the year. That’s why Alton Road today is by far the least-walked commercial street on South Beach. And this is in a place where 45% of the people don’t even own a car (because they don’t need them) and most of the tourists don’t rent cars as well. In other words, the Florida DOT through their ignorance killed a lot of real estate value on Alton Road. And yes, Alton has several glaring flaws that will take a lot of work to fix, but the street trees could have been done correctly, and at no additional cost.

Residential street trees planted every 25-50 feet along a street require only one tree on every property line on most residential streets in traditional neighborhoods. If the street is populated with narrow townhouses, it may require only one tree on every other property line whereas parts of the neighborhood with large lots (more than 50 feet wide) require two trees per lot.

Trees should be planted either in swales (on primarily residentail streets) or in tree wells (on Main Streets). Do not listen to “urban foresters,” who insist that trees must be planted in landscape beds large enough for their mature drip lines. Their grand lie is legendary… if what they said were true, canopy streets like Meridian Avenue on South Beach would be impossible. They are terribly wrong about this, and need to be called out on it. These are street trees, after all, not forest trees. Primarily residential streets may have swales up to 5 feet wide and of indefinite length, whereas primarily commercial streets may have tree wells 5 feet square or smaller.

YES, “urban foresters” can specify trees that are unsuitable as street trees and will die on an urban street. Yes, they can specify planting conditions that will cause their self-fulfilling prophecies to occur. But hopefully, you live in a town where at least one good landscape architect knows which tree to plant and how to plant it so that it thrives for centuries. Go to Charleston, South Carolina… this isn’t just possible, but is commonplace.