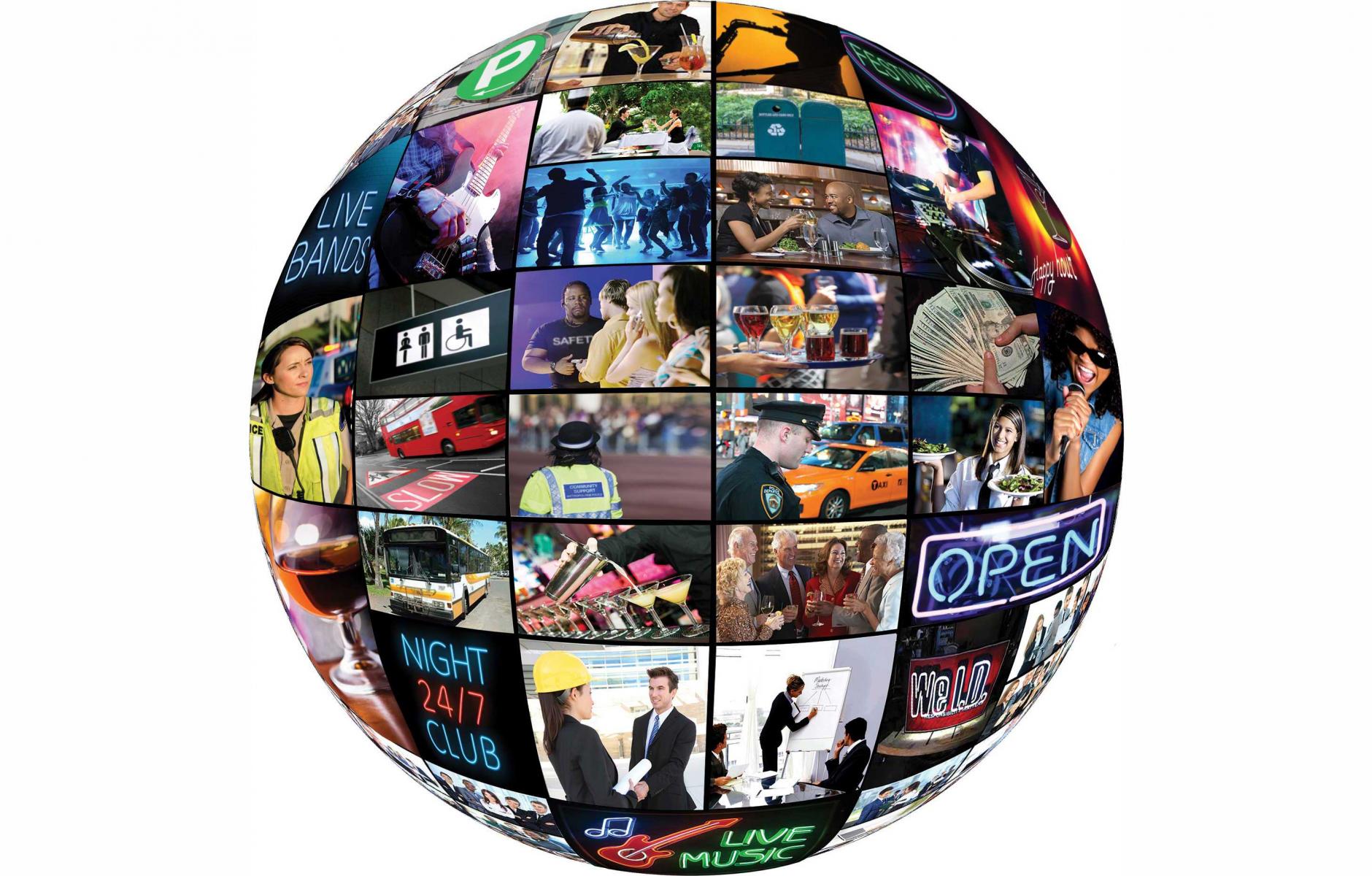 Harnessing the power of the sociable city

Sociability is an economic engine driving the development of cities throughout the world. Keys are to enhance vibrancy, assure safety, and plan for people.
JIM PETERS   &nbspMAR. 24, 2016

As more people seek a more urban lifestyle, there is increased demand for places to eat, drink, and listen to music and dance. More people brings more vibrancy, though may also place additional burdens on public safety resources and impact the quality of life for residents not part of the “other 9 to 5.”

For the past 30 years there has been a dramatic transformation, a shift from suburban development to greater investment of public and private resources in downtown districts. Clearly, the “New Urbanism” and “Smart Growth” movement is here to stay. Housing is denser, public transportation more widespread and efficient, and pedestrians and bicyclist enjoy revamped landscape and streetscapes. In essence, many city downtown districts are seeing dramatic changes and sweeping improvements. 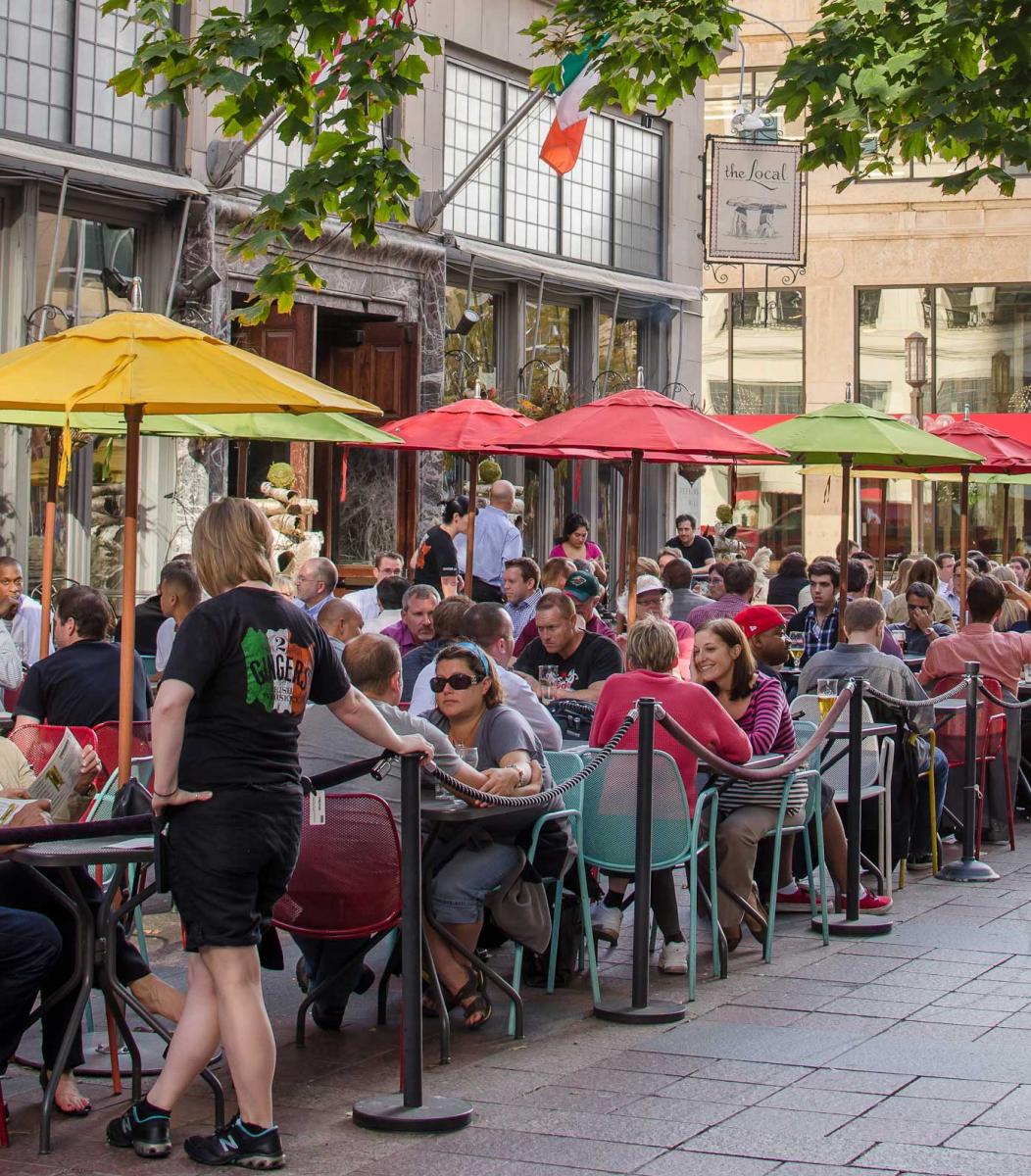 “Sociable Cities” plan for people’s need for socializing by enhancing vibrancy in public and private spaces, assuring safety and managing impacts on quality of life from an active nighttime economy.

Planning for the other 9 to 5

Dining and entertainment venues are expanding rapidly to meet the growing and diverse needs of residents and visitors. And while lifestyles with later hours are integrated into residential areas, there is increased focus on planning for people. Anticipating people’s need for social interaction at different times of the day and night is critical for success in a mixed-use community. Properly planned and managed hospitality zones where people gather to socialize can be a prosperous investment, combining and centralizing attractions and services. Adversely, unplanned hospitality zones can be costly, lead to conflicts, and produce an excessive burden on police and demands for appointed and elected officials to manage safety and quality-of-life impacts.

Trends and the social economy

Understanding the complexities of people gathering in groups in greater numbers in mixed use districts, and subsequently seeking space conducive to their lifestyle, requires thoughtful and informed planning and zoning. In addition to the critical details of physical planning of a community’s core, it is also necessary to plan for social interaction. Whether dealing with public spaces such as parks and plazas or commercial venues that provide dining and entertainment, policymakers and planners need to carefully consider the demographics and social needs of both residents and visitors.

Birthrate data can often provide clues to the past and present trends and also serve as a barometer of future socializing patterns. Age is often a factor in the frequency that people go out to meet and socialize. Two critical ages are 18 and 50. The age of 18 is a transition into adulthood; 18-year-olds often go away to college or enter the workforce. The age of 50 is often when people become “empty nesters” when their children are grown and move away. Age 50 is also considered a peak earning period in an adult’s life.

The chart below is based on U.S. birthrate data; it shows patterns of the U.S. population turning 18 and 50 since the 1970s when the rise in the number of young adults led to the expansion of the disco nightlife scene. Meanwhile, recent decades shows a merging of the two age groups’ growth rates. 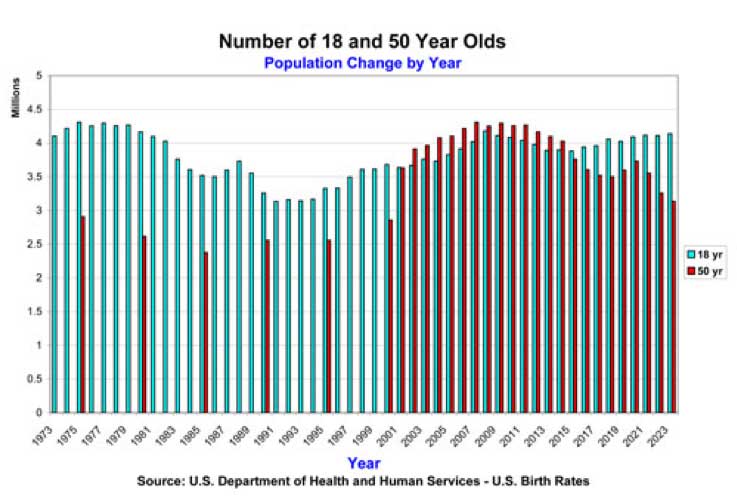 This simultaneous growth in the two population groups corresponds with the competing demands of these two groups for the vitality and amenities of the urban community. Conflicts can arise from the two different times of day during which they patronize dining and entertainment districts—the 50+ market tends to enjoy hospitality before 10 p.m.; the 18+ market generally begin to arrive at 10 p.m. or later.

Lifestyles and social interaction can often be correlated with age and life stage. While this represents a broad generalization, understanding the essential needs of people and the demographics of your local government, district, or the markets you are developing can determine the best mix of dining, entertainment, and event venues.

Integrating potential social interaction into revitalization and development planning can result in a stronger and more vibrant social economy with less impact on city and county resources to  manage problems. The major question then becomes: How well does your community meet the needs of each generation?

What is the Nighttime Economy worth?

Cities from New York to San Francisco, and London to Sydney have conducted economic impact studies of the nighttime economy. While still in the early stages of consistency for comparison, these preliminary efforts highlight the importance of the “other 9 to 5” and need for reallocation of resources and services to match current and future needs.

With nightlife proving to be a significant contributor to the overall economy, the City of San Francisco has created a new position of Business Development Manager (Nightlife & Entertainment Sector in the Office of Economic and Workforce Development). The city also commissioned the “Other 9 to 5 Transportation Study” to evaluate the needs of night workers in the hospitality industry, as well as in office maintenance, health care and delivery services.

Conducting an economic assessment of dining and entertainment businesses should be the first step in strategic planning by local governments. Gathering accurate economic data is critical for cities that issue permits and licenses and allocate additional resources to promote a more safe and vibrant nighttime economy.

Planning for people in a concentrated hospitality zone

Although two businesses may take up exactly the same square footage, the “people factor” often creates entirely different impacts and challenges in a mixed-use entertainment district. While a bookstore may have 10 to 15 customers and three to four employees present at any one time, a restaurant of the same size may host 100 customers with 10 to 20 employees.

Contemporary planning typically specifies in tremendous detail the physical space and structures. Still, city and county planning often doesn’t fully consider the number of occupants and visitors. For example, 3,000 housing units can yield approximately 7,000 people in a concentrated residential area. While 100,000 square feet of retail space can house 20 new dining and entertainment venues, with a total seating capacity (occupancy) of 15,000 people, many who visit in the evening hours and after 10 p.m. 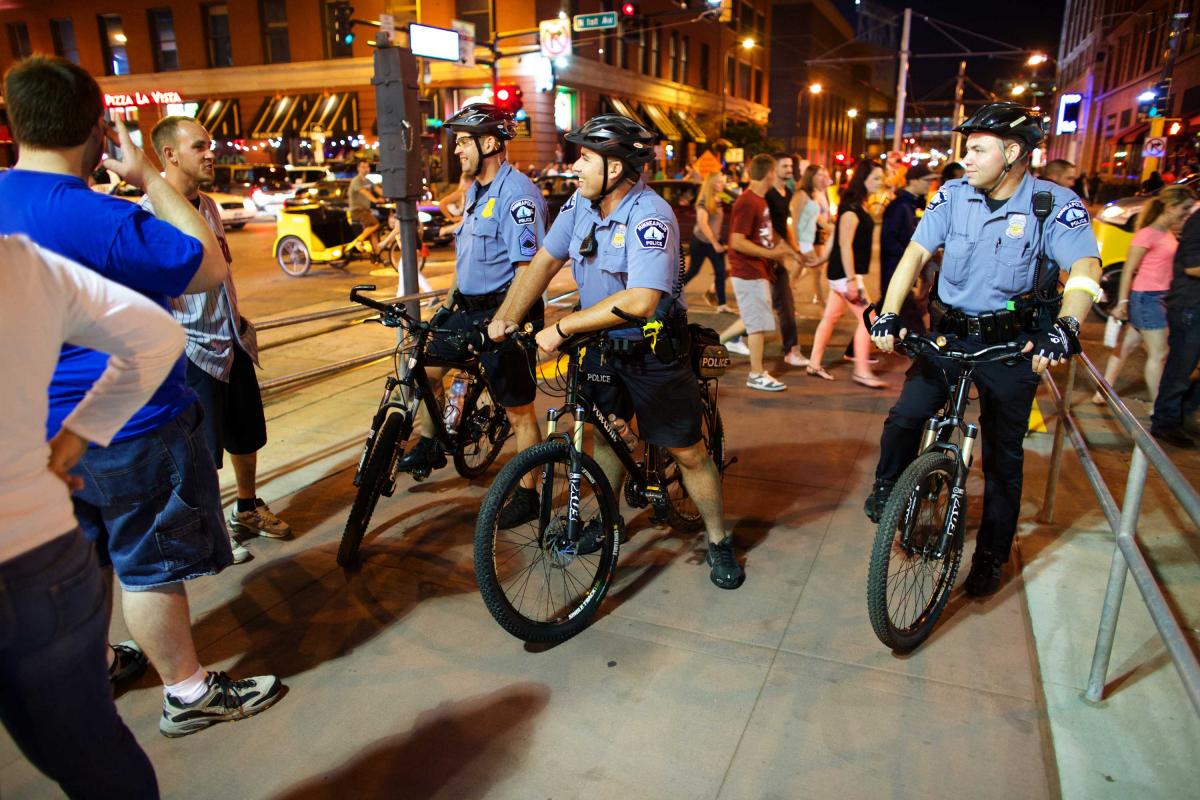 This may require staff dedicated exclusively to managing the nighttime economy. Among those North American cities that have established  “nighttime coordinator” or “night managers are: Seattle, Washington; San Jose, California; Pittsburgh, Pennsylvania; and Edmonton, Alberta, Canada. These cities have hired nighttime coordinators (also called “night mayors”) to serve as a liaison among key stakeholders, identify gaps in service, resolve conflicts, and settle proactive schedules for planning. Similarly, European countries are seeing a growth in interest in the “night mayor” concept.

Finally, with changing demographics, it is important for local government managers to consider time and generational shifts as well as use of office, retail, and residential space. The inherent value of smart growth planning is that ultimately, less time is spent commuting. Consequently, with more efficient public transportation and less commute time, people have more time to spend socializing with coworkers, families, and friends. This translates into an increased demand for more vibrant places to socialize and a burgeoning hospitality zones.

Adapting traditional zoning, licensing, and permitting systems to assist smaller, more flexible, and consumer-oriented businesses is one way local government managers can work to enhance this industry. A new form of “concierge governance,” designed with streamlined systems, can help to enhance cooperation and progress toward common goals. Concierge governance can be utilized to espouse an overarching theme of “how can we help you succeed?”

The terms “mixed-use district” and “multiuse district” traditionally describe the blend of residential, commercial, and retail development within a particular region. A “hospitality zone” is an area of mixed or multiple uses that is distinguished by a high concentration of dining and entertainment businesses such as restaurants, pubs, taverns, cafes, and nightclubs. A hospitality zone often has an active street life and may serve as a center for community fairs, festivals, and events.

Recognizing that hospitality zones evolve and change over time is also critical to proper planning. Emerging hospitality zones, where creative culinary entrepreneurs seek low-rents in deserted warehouse districts, can be nurtured with infrastructure improvements, expedited permitting and licensing, and zoning updates for new developments. Conversely, a declining entertainment district with an over-concentration of businesses engaging in risky practices and promotions requires a tightening of permits, higher standards for new businesses, and more dedicated resources to ensure compliance with public safety policies.

Sociable cities provide public spaces to socialize that appeal to all four social groups’ interests and also address the stages of development and core elements of a safe and vibrant hospitality zone.

The key component for each element’s success is not always infrastructure or system changes. In essence, it is people. In the end, it is people who will enjoy a hospitality zone’s vibrancy, and it is the communication and cooperation among various stakeholders who will facilitate implementation of necessary changes to ensure sustainability.

Sociable cities attract conventions, tourists, residents, and a creative pool of talented professionals that provide an economic base that helps emerging industries that are clean and sustainable. Smart Growth and planning for people in a 24/7 economy requires adaptation and efficient management of resources through common vision, communication, and collaboration. 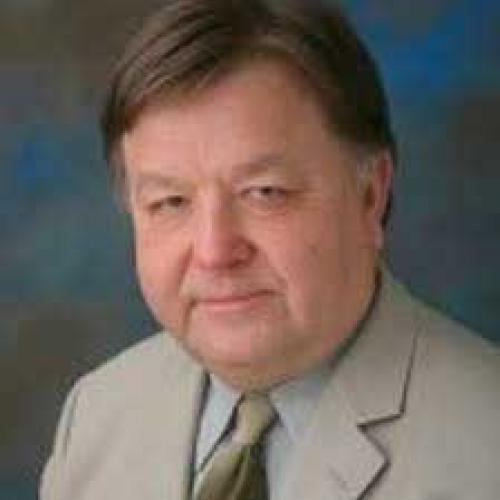