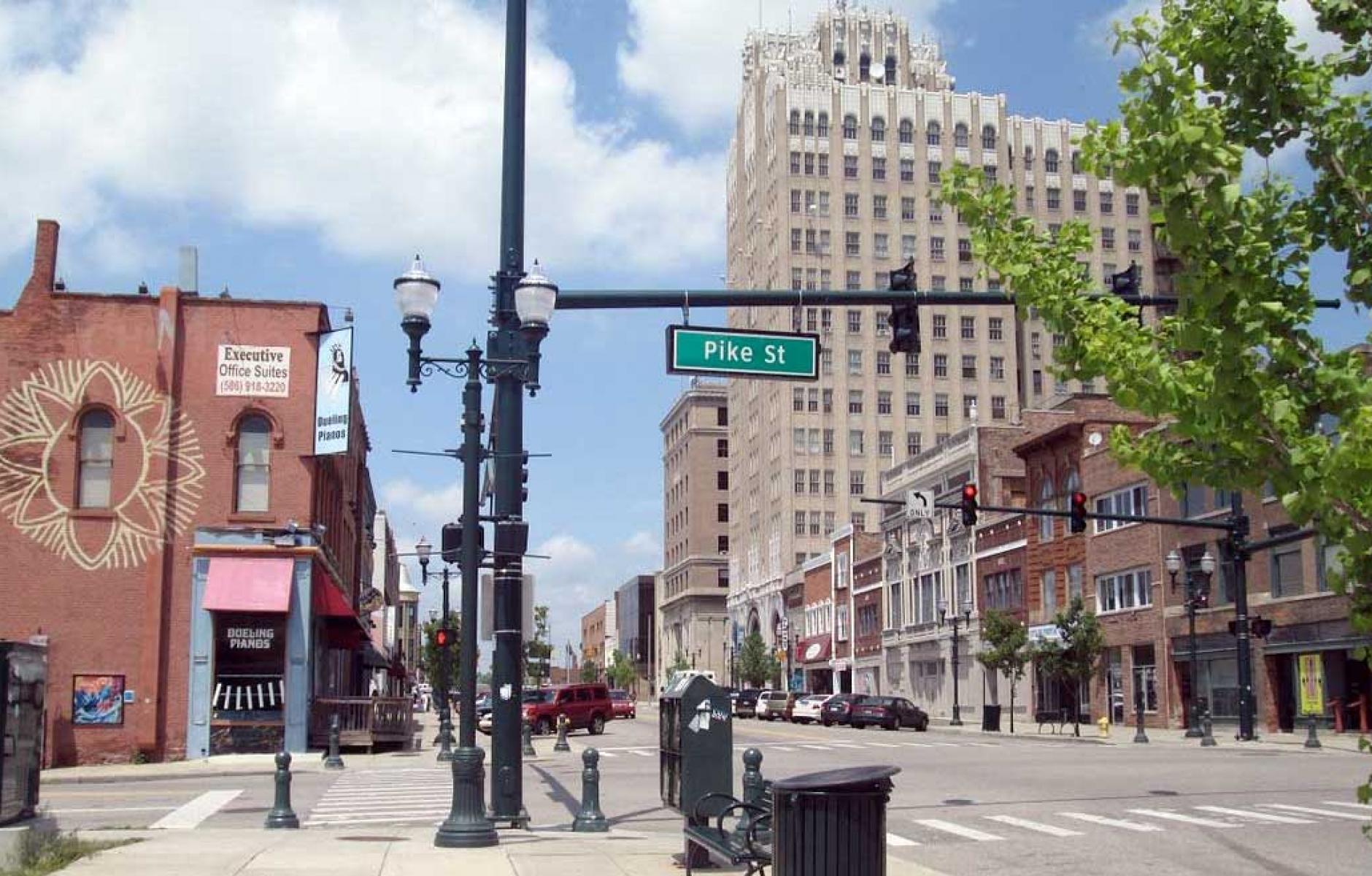 Saginaw Street is the most walkable area of Downtown Pontiac.
Development

If those changes are made, a market analysis shows support for 211,000 square feet of retail producing up to $55 million in annual sales.

The team—which also included Gibbs Planning Group, architects Archive DS, and Conrad Kickert of the University of Cincinnati—worked with with a diverse range of citizens and officials to create a plan. The event was sponsored by the City, CNU, and the Michigan State Housing Development Authority. Legacy Charrettes are designed to apply CNU’s placemaking expertise to make a lasting difference in the Congress's host region—which is Detroit in 2016.

The declining industrial city lost population from 1970 to 2010, including a 10 percent drop since 2000. Sweeping urban renewal, including construction of a massive parking structure called the Phoenix Center, left gaping holes in the urban fabric—which could be filled with catalytic development projects that bring more residents and boost the economy, the planners said.

The team recommended a phased demolition of the Phoenix Center over two or three decades—but in the meantime its massive roof deck could be used for recreational purposes, such as basketball courts and skating/hockey rinks. Developers could build around the Phoenix Center while it stands.

If the city converts the Wide Track to two-way traffic, increased retail demand could be absorbed by existing businesses and/or with the opening of 50 to 65 new stores and restaurants, writes retail specialist and planner Robert Gibbs.

Unfortunately, downtown is full of pedestrian-unfriendly streets. This problem could be alleviated with better crosswalks and more on-street parking. Remarkably, most of downtown Pontiac's streets don't have on-street parking, which would calm traffic and boost retail. In the long run, new development with active frontages is needed.

“Downtown Pontiac has excellent urban assets that can be envied by many cities—small walkable blocks, numerous historic buildings that gracefully shape the streets," says Galina Tachieva, who led the charrette for DPZ. "However, there are many gaps that should be filled in with more shops, restaurants, services and places to live.”

More than 60 residents attended the first charrette event, and more came the next two days. One goal was to create a transit-ready southern edge of downtown with the potential to become a regional multi-modal transport hub and a catalyst for transit-oriented development.

The team recommended that the city adopt the Legacy Charrette plan, which includes many lean and incremental steps to kick-starting economic activity—such as changes to codes that simplify bureaucratic processes, improve streets with paint, and fund housing through relatively small loans.

Downtown streets. Council should pass a resolution to support paint-based street improvements in downtown and initial Clinton River Trail extension through downtown to be completed along with the City’s re-striping process beginning in May 2016.

• Amend zoning in downtown to simplify the code and implement targeted adjustments to encourage development in downtown.

Development Process. Combine all development fees into a single fee.

Downtown housing. Oakland County should provide HOME grants for rental properties in downtown Pontiac with an initial goal of 100 units at $40,000 per unit for a total of $4,000,000.

"The Legacy Charrette outlined practical steps how to revitalize Downtown Pontiac in the next month, in the next year, the next decade and beyond," says Tachieva. "Restriping of streets to double the number of on-street parking, and making streets two-way to help local businesses can be done tomorrow; improving and reusing the Phoenix Center as a sports venue can be started soon after; the transportation recommendations should be put in motion concurrently; a public market, pop up retail and incentives for infill and redevelopment can come soon after. When the enormity of the challenge to restore Downtown is broken into manageable steps, and there is leadership to start the process, nothing looks impossible."