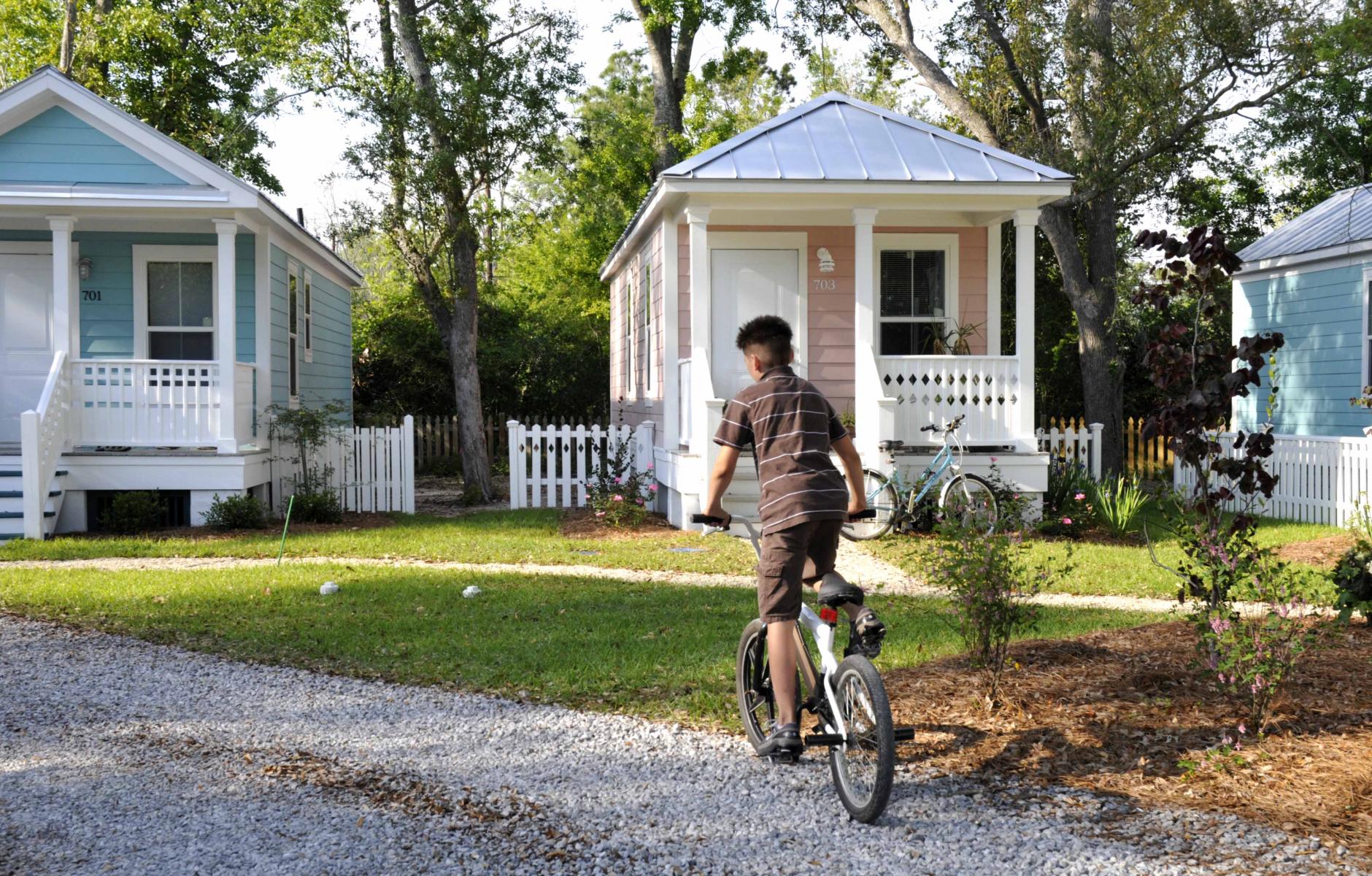 The little house that could

When Hurricane Katrina struck in August 2005, aid for the region arrived in all shapes and sizes from across the US.
ROBERT STEUTEVILLE   &nbspFEB. 3, 2016

When Hurricane Katrina struck in August 2005, devastating historic communities across the Mississippi Gulf Coast, aid for the region arrived in all shapes and sizes from across the US. At CNU, over 100 members volunteered to help—culminating in a massive planning session for the coast. The first task combined design, planning, engineering, and community development: Create an alternative to the standard “FEMA trailer.”

The Federal Emergency Management Agency’s trailers cost about $70,000 in 2005 and served as on-site housing after major disasters. Their bare bones design and cost spoke to their intended temporary nature—yet at the time Katrina struck, some Florida residents were still living in trailers twelve years after Hurricane Andrew in Florida.

CNU founder Andres Duany, who convened the Mississippi Renewal Forum in mid-October, 2005, challenged the Forum’s architects to create designs for affordable cottages that could be manufactured or shipped in modular form and easily installed in a variety of locations—from a neighborhood near downtown to a hamlet. Unlike trailers, the “Katrina Cottages”, as they were called, were designed with porches and facades that create a sense of place. Rather then being used and discarded, the cottages were designed for permanent value.

The idea gained national attention with Marianne Cusato’s 294-square-foot design, which was published in the Biloxi Sun-Herald during the charrette and then built and displayed three months later at the International Building Fair in Orlando. It won the People’s Choice architectural award from Cooper Union in 2006 and was published in mainstream papers and journals nationwide.

More Katrina Cottage designs were created for Louisiana—and Cusato designed four versions to be sold by Lowe’s as kits. “The models (for the Katrina Cottages),” says Cusato, “were cottages built after the 1906 San Francisco earthquake and the Sears Robuck houses.” People are still living in the earthquake cottages, she adds—and one recently sold in 2005 for $500,000.

About 2,800 cottages were manufactured for Mississippi and another 500 for Louisiana. About 500 more have been built and sold by Lowe’s across the US. These cottages provide affordable housing and about a quarter have been placed in infill and neighborhood settings, notes Bruce Tolar, an architect who participated at the Mississippi Renewal Forum. Seven have been placed in an “academic village” in Seaside, Florida. A small town in Colorado has 12 Katrina Cottages, and they have been built in a half dozen locations on the Mississippi Coast, as well as New Orleans, Lake Charles, and Baton Rouge, Louisiana. Individual cottages have been built from Washington State to South Carolina—one in the new urban community of I’On.

Tolar credits the cottage with spurring the “small house” movement that is being picked up by nonprofit housing developers. “Ten years out, I see all of the things the Katrina Cottage has affected,” he says. “I think it is very successful. It changed the conversation. It is not just about recovery housing. It’s an idea that won’t go away.”

But the cottage hasn’t had an easy path—and many challenges remain. A century after the San Francisco earthquake, the system of codes that guide construction and development has become very complicated. Manufactured housing has one set of codes, while houses with foundations have another. Municipalities have their own regulations and many have minimum square footage requirements. The Mississippi cottages were built according to manufactured housing standards, but were also designed to meet HUD and International Building Codes once they were removed from the trailer frames and permanently placed on foundations.

“They became known as trailers and were less desirable,” says Tolar. “People wanted to keep them but cities did not want to keep them.” FEMA did not want cottages to be permanent—that took an act of Congress with the help of Gov. Haley Barbour of Mississippi and Sen. Mary Landrieu of Louisiana. Manufacturers, meanwhile, had never built anything that looked like a Katrina Cottage.

Tolar, who has built Katrina Cottage neighborhoods in Mississippi, acknowledges that Katrina cottages “didn’t address all of the issues. No one understood how big a project it was to make it happen.” The accomplishments to date have been through “the sheer guts and determination” of a lot of people, he says.

One of the goals was to give FEMA a playbook to build permanent housing with value rather than simply trailers, Cusato says. When Hurricane Sandy hit, FEMA’s office in New Jersey requested information on Katrina Cottages from headquarters. They had no information and officials sought out Cusato—who they found on the Internet—for details. “We gave them a playbook and they lost it,” she says. But Tolar thinks that if a hurricane were to hit again on the Gulf Coast, people would demand cottages instead of trailers.

Cusato is most proud of the variety of uses for the cottages. “We designed a very versatile model,” she says. “It could be built in New Orleans or anywhere else in the country with minor modifications of windows and eaves and proportions. Mass produced and calibrated to be local to place—that concept has legs.”

She concludes with a comparison to an American icon: “Henry Ford went out of business two or three times before he got the Model T. That’s where we are at. We have gotten proof of concept. This is a desired way for people to live in and out of disasters.”