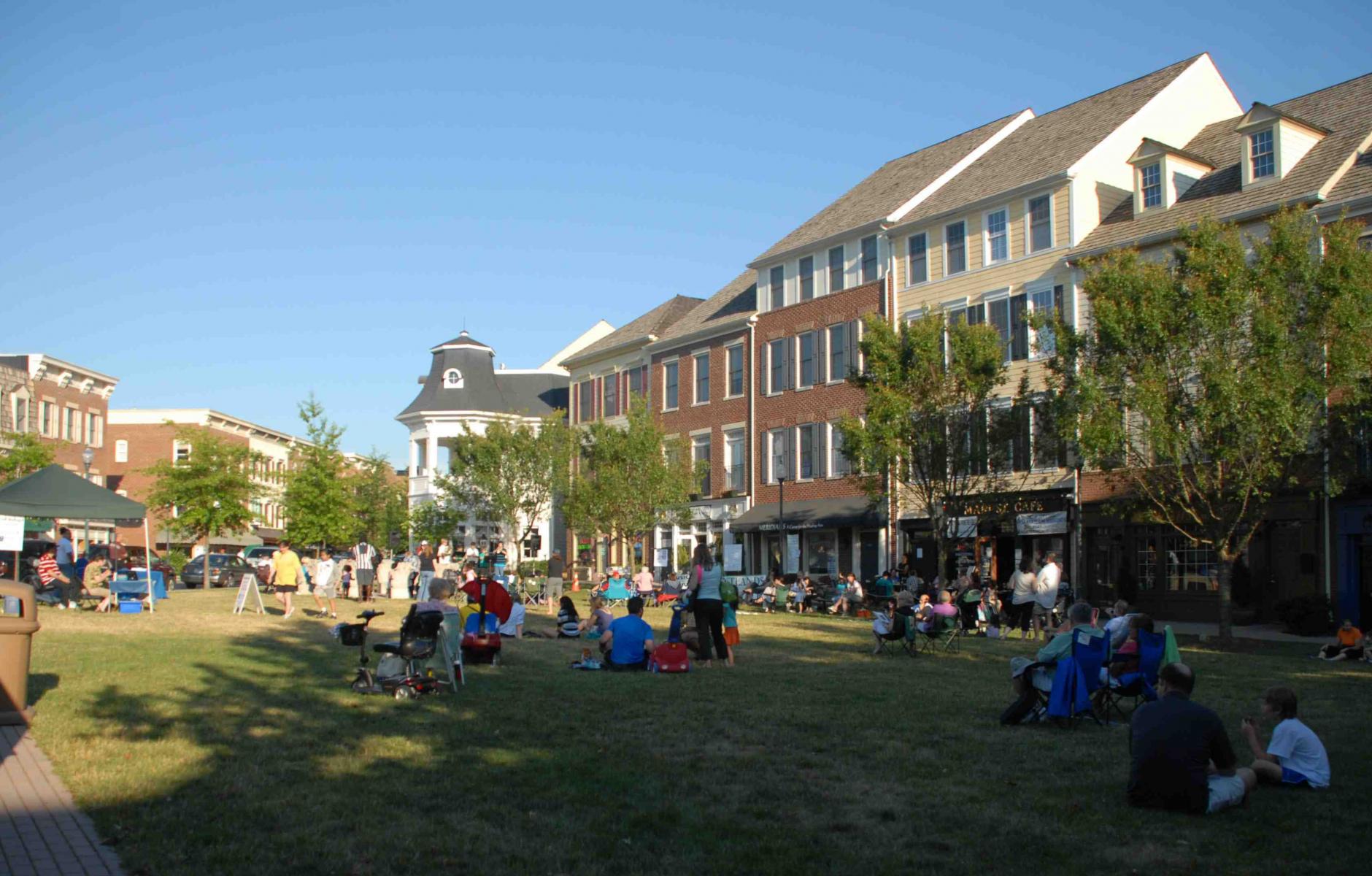 The four phases of New Urbanism

As revitalization of cities moves forward, urbanists are partway through a multiphase process that is changing America.
ROBERT STEUTEVILLE   &nbspMAR. 10, 2016

The New Urbanism began mostly as a large-project, greenfield movement. Some new urbanists concentrated on infill in the 1980s and 1990s, but their efforts attracted less media attention and investment.

Intellectually, the movement aspired to revitalize entire regions—especially historic cities and towns, which were, after all, the inspiration for a return to walkable places. However, 30 years ago most cities were in deep trouble, so just about every large developer focused instead on the suburbs. New urbanists looked at the damage inflicted by sprawl and fervently sought to reform the system.

That is what I call the first phase of New Urbanism, in which traditional neighborhoods developments (TNDs), inspired by historic neighborhoods, were built as alternatives to conventional master-planned communities. TNDs like Seaside, Kentlands, Orenco Station, New Town at St. Charles, Habersham, and Celebration represent this era well; they showed themselves to be laboratories of ideas. These were private-sector projects that created pockets of urban place by overcoming legal and institutional barriers to compact development.

That phase lasted right up to the housing crash in 2008. Developers proved that mixed-use neighborhoods, with main streets and centers, could be built and that the public would buy into them. Long-neglected building types were reintroduced into many American markets: Among them were shopfront houses, small apartment buildings, granny flats, courtyard housing, liner and flex buildings, various mixed-use buildings, and small-lot single houses with usable porches and rear garages.

Walkable streets designed for slower-moving traffic were fought for and built. These included narrow residential streets, main streets, boulevards, and avenues. Although these types of thoroughfares continue to function in historic neighborhoods, few proposed building them again prior to New Urbanism.

The urban-rural Transect was conceived and explained, and new land-use codes—form-based codes—were created as alternatives to conventional zoning.

The difference between a neighborhood built around a five-minute walk and conventional suburban development was explained to public officials, professionals in fields dealing with land use, and citizens. “The early victory of the New Urbanism was in shifting the academic and professional conversation away from mass suburbanization as the only available model for the human habitat,” explain Mike Lydon and Anthony Garcia in their book, Tactical Urbanism.

Yet redevelopment only took center stage after the housing crash. It did so for two reasons: First, the market for building in cities had steadily grown as crime dropped throughout the 1990s and early 2000s. Second, the Great Recession stopped greenfield growth in its tracks and dried up financing for large projects. Suddenly, redevelopment looked very appealing.

The vast infrastructure of historic cities and towns, long neglected, could be built on again. The street grid provided the armature for the mixed-use neighborhood advocated by new urbanists. Mixed-use centers and historic buildings already existed—the developers had only to rehabilitate them or put up new buildings around them, sometimes making new street connections and public spaces.

Even as Phase 2 prevails today, a smaller version of Phase 1 continues as older TNDs head toward completion and new ones occasionally are launched.

Phase 2 has great advantages—our ancestors left a great legacy, complete with historic buildings of excellent detail and superior transit services. Historic cities occupy many of the best locations. As long as people are willing to reinhabit an established city or town, there is less need to make places from scratch.

This redevelopment phase operates on a wide range of real estate—from downtowns and areas adjacent to downtowns to streetcar neighborhoods, former industrial districts, small cities and towns, and transit-oriented properties.

Phase 2 uses the lessons that were learned during Phase 1. Form-based codes work particularly well in older places that are undermined by conventional suburban codes. New urban street design helps repair city streets that were damaged by car-oriented traffic engineering. The building types and market studies created for TNDs are useful as well. Phase 2 breaks new ground in many areas, including finance reform for mixed-use buildings, parking policy, Tactical Urbanism and Lean Urbanism, and transit-oriented development. The architecture produced in Phase 2 is more varied and robust.

The second phase should carry on for decades, but it also poses some problems that require further evolution of the movement. One issue is gentrification. The supply of 19th and 20th century street grids is finite. The limited supply causes prices to rapidly rise in fashionable neighborhoods of economically strong cities with “good bones.”

Another problem with focusing on areas that possess historic street grids is that this offers little help to places that have already been consumed by sprawl. Up to 90 percent of the land in metropolitan areas has been shaped as conventional suburban development. These areas will become less accessible as transportation habits change and as fewer people drive. Now we have two systems functioning side by side: Old, walkable, mixed-use neighborhoods on historic street grids; and the larger conventional suburban development.

Phase 3 New Urbanism is suburban retrofit, also known as sprawl repair. Planning books have described this growing trend in considerable detail. New urbanists have been trying to turn “grayfields” into urban places for a long time—Mashpee Commons (see above) and Mizner Park are just two of the mixed-use town centers that have been built on former suburban shopping malls—a transformation that got under way in the late 1980s. Sprawl is vast, however, and such projects are still isolated and pioneering. Phase 3 will take the spotlight when automobile-oriented transportation engineering is reformed on a much grander scale. That time may come sooner than we expect, because the scientific justification for building wide open thoroughfares through urban areas has been discredited over the last 20 years.

When Phase 3 is in full swing, sprawl repair will take pressure off historic neighborhoods. A new supply of walkable places will emerge in the suburbs.

The postwar suburbs hold the most potential, especially when affordability is a paramount concern. Twenty-six million houses were built from 1946 to 1965, most single-family, according to June Williamson, coauthor of Retrofitting Suburbia. These early postwar suburbs were built with mostly connecting streets and fading commercial strips lying fallow nearby.

Parking lots on these strips could support millions of new residential units. Phase 3 New Urbanism can revitalize languishing first-ring suburbs, but first, multilane arterials must be narrowed, redesigned, and made walkable. This outcome still seems hard to imagine, despite the success of the complete streets movement. Yet the formidable transportation industrial complex, the biggest impediment to Phase 3 New Urbanism, is yielding to pressure and will reform more.

Phase 4 is when we come full circle, and street grids are as normal as they were 100 years ago. These grids don’t have to be rectangular like most of the 19th Century grids—they need only be connected, internally and externally.

The normalization of new street grids may be years or decades away, but extensively connected street networks are the natural way to develop communities, absent the obstruction caused by automobile-oriented transportation engineering and street policies. The transportation field must be fully reformed before Phase 4 takes effect. This is why the techniques that I associate with Phase 3 must come first. Expect to see early pioneering efforts in reestablishing new street grids that connect to larger thoroughfare networks.

Phase 4 New Urbanism will not mean an end to drive-only suburbs any more than the last century meant the eradication of historic cities and towns. Drive-only suburbs will always be with us—they continue to grow today due to zoning laws and the infrastructure that supports the separate-use mode of development.

The New Urbanism is emerging slowly, in phases. We are part of the way through a change that will take generations. On a long journey, it helps to know where we are going. Urbanists are now immersed in the revitalization of cities, and many elements will play a critical role in this trend—architecture, building types, finance, and codes included. That work is crucial but it is not the end-game: the way we design and lay out streets will ultimately be the most permanent foundation of our physical communities.

New Urbanism was founded by architects, and we continue to learn from them. But transportation engineering and street design will be key in the coming phases of New Urbanism, a movement that is slowly strengthening America's bones.