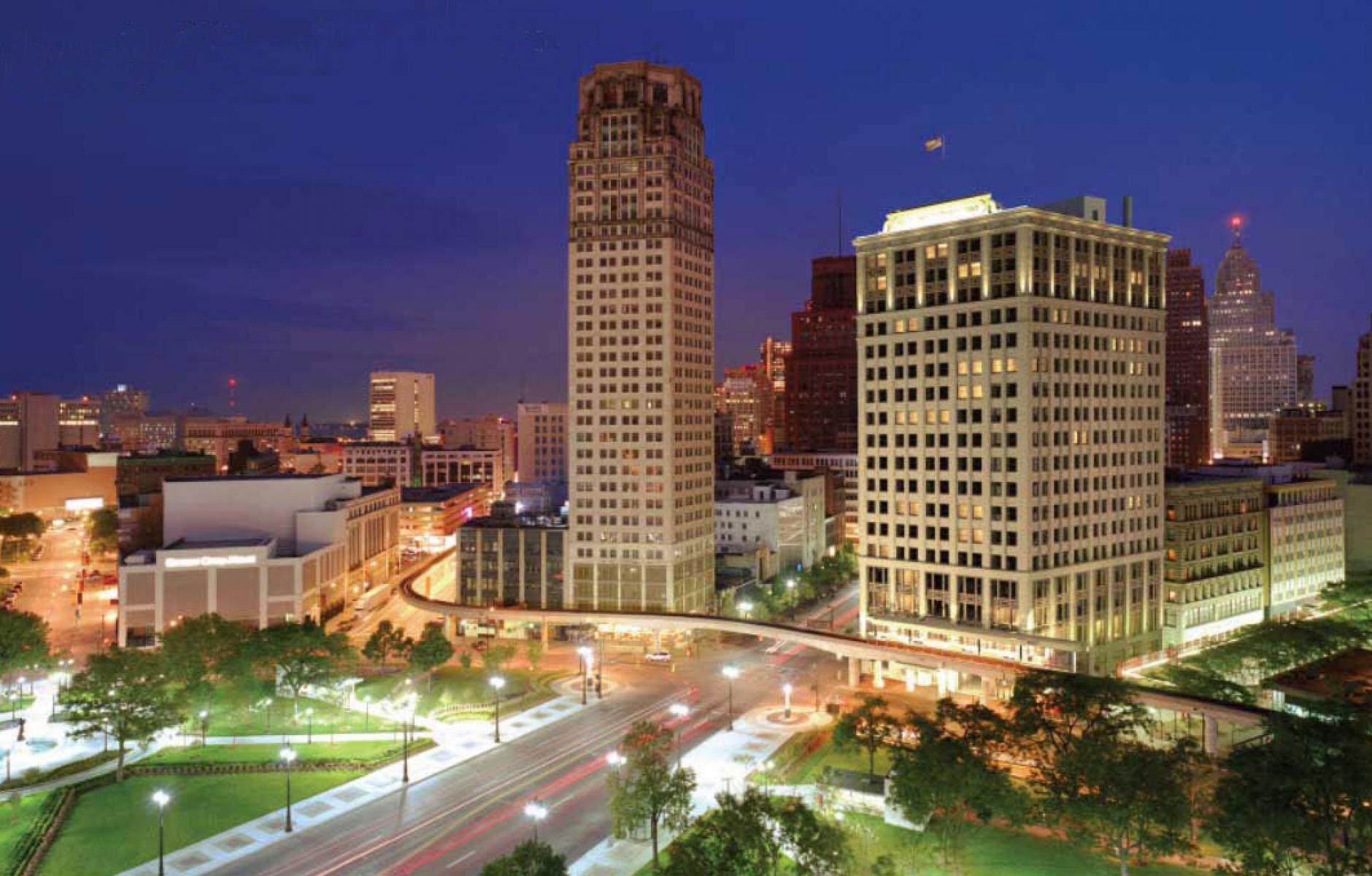 The area around Grand Circus Park, Detroit, where CNU 24 will be held
Equity

The Transforming City is the theme of this year’s Congress—and it’s the most inspiring CNU storyline that I can remember.
ROBERT STEUTEVILLE   &nbspMAY. 11, 2016

Everything bad that has happened to US cities since 1950 is compounded in the Motor City. Detroit has lost more than 60 percent of its population. Its industrial economy is decimated. Houses have burned down almost nightly for years. Crime, poor schools, bankruptcy—you name it—Detroit has suffered more than most cities. And yet you don’t get the sense that the city is defeated.

Far from it—Detroit seems to be on the rise. The spirit of resilience is palpable. That’s why Detroit is an exciting location for CNU 24 in Detroit June 8-11. One big story that attendees will delve into is the downtown renaissance. Detroit’s downtown is booming. That story goes well beyond billionaire Dan Gilbert, who deserves a lot of credit. Downtown has gained more than 16,000 employees since 2010, boosted by Gilbert’s moving of Quicken Loans and his umbrella company Rock Ventures, which includes real estate development. Gilbert went on a buying spree, acquiring 90 buildings and parking facilities, according to Curbed Detroit, to refurbish properties for office and residential.

Gilbert built on a foundation of incremental development that started in the late 1990s, according to Mark Nickita of Archive DS, and architect and business owner. “There’s a definite connection between dozens of incremental developers and then huge major players who are investing billions of dollars,” he says. “Plus the foundations like Kresge who helped fund the QLine (the streetcar), and then you add in demand and interest in urban life and a major metropolitan area of five million people that can draw on incredible resources—that’s driving what is happening in Detroit now.”

Other notable players are the pizza tycoon Mike Ilitch, a big developer, and Blue Cross Blue Shield, which brought 3,600 employees downtown from 2010 to 2012.

Downtown, which often felt like a ghost town 15 years ago, now has a housing shortage, with 98 percent residential vacancy. More people are creating demand for retail, and Gilbert is moving ahead with a 225,000 square foot retail project with 250 residential units on the site where Hudson’s Department Store once stood.

The majority of the growth has been in refurbished old buildings, while the public spaces have been spiffed up and reactivated. So downtown now combines people on the street, attractive plazas and parks, restaurants and businesses, and the cultural infrastructure and architecture of a great older city.

Attendees will experience all of this firsthand because they will be constantly outside. By design, CNU 24 is taking place in numerous venues spread out over multiple blocks.

Downtown Detroit is not unique. Similar stories are playing out in other Great Lakes cities like Rochester, Buffalo, Cleveland, and Milwaukee. These, and many other cities, have empty buildings that can be reoccupied, and blocks and streets that are conducive to the kind of urban places in demand today. These cities could learn from Detroit.

The Grandmont Rosedale section of Detroit defies the usual stereotypes. These five neighborhoods in Northwest Detroit boast street after beautiful street of 1920s homes with few vacancies and an 82 percent homeownership rate. The main thoroughfare is Grand River Avenue, a regionally significant artery that extends from downtown far into the suburbs, like a spoke from a hub.

Grand River Avenue is dominated by motor vehicles, has vacancies, and is mismatched in appearance and function from surrounding neighborhoods. Small changes could begin to make Grand River “as nice as the neighborhoods behind it,” says Victor Dover, the urban designer who led the charrette. "Part of that is planting real street trees rather than little 'petting trees.' The travel lanes need to be right-sized to correct the excessive vehicle speeds, and that makes room for protected bike lanes and on-street parking."

Grand River benefits from recent entrepreneurial activity, such as the independent Page’s Bookshop in a single-story storefront built to the sidewalk. The biggest charrette accomplishment was shifting attitudes about what is possible on a half-mile segment of the thoroughfare. "We managed to boost their confidence, and our confidence, over the prospects for the immediate and distant future along Grand River Avenue," says Dover. The main idea is to bring back diversity and choice to the thoroughfare, restoring the street life that existed in the days of streetcars, when the neighborhoods were built.

Urbanism outside of Detroit

Ten miles to the north of Detroit, the downtown of Pontiac, Michigan, was significantly demolished by self-inflicted urban renewal in the late 1960s and 1970s. Among the accomplishments of The Pontiac Plan was a parking garage of epic proportions called the Phoenix Center, named as if this would give the city wings. A few office buildings and vast areas of surface parking surround the Phoenix Center today.

Pontiac went into a tailspin and lost population for four decades, but the city has leveled out this decade. Now, downtown could rise again, according to Galina Tachieva, leader of CNU’s Legacy Charrette there. “Downtown Pontiac has excellent urban assets that can be envied by many cities—small walkable blocks, numerous historic buildings that gracefully shape the streets," she says. Yet the gaps in the urban fabric must be filled.

Interventions can start immediately and make a substantial difference, the CNU team found. All the city has to do is reverse a one-way loop, sending traffic back through downtown, and add crosswalks and on-street parking (remarkably, most downtown streets lack on-street parking) to ignite retail development. If these changes are made, a market analysis shows support for 211,000 square feet of retail producing up to $55 million in annual sales.

Pontiac is an example of why the region’s urbanism is not just about Detroit. What Strong Towns calls the “suburban experiment” was conducted on a massive scale in the Detroit region. But some of these experiments can be reversed incrementally, with substantial return on investment.

In addition to lean concepts, the Grandmont Rosedale and Pontiac plans offer longer-range ideas, but civic leaders in both communities want to act now. The plans look toward transportation choice and diverse uses where parking lots and cars now dominate.

The Legacy Charrettes offer a preview of what to expect at CNU 24—a boots-on-the-ground gathering. CNU has always offered great tours—this year’s are already filling up—but a dozen CNU 24 sessions will also take place in the neighborhoods as the Congress launches The City as Platform. Participants will take to the streets and see the problems and solutions firsthand.

Unfortunately, they won’t be able to ride the new streetcar, a 3-mile line on Woodward Avenue that is scheduled to open later this year—but the tracks are in place.

Meanwhile, the city overall seems to be turning a corner. Detroit lost 25 percent of its population between 2000 and 2010, a scary freefall. The latest census figures show the city losing only 0.4 percent of people between July 2014 and July of 2015. A nationwide analysis showed that Detroit’s Walk Score rose 2.2 points in 2015—to 52.2. Among cities with more than 300,000 population, Detroit is in the middle.

It’s easy to see why registrations for Detroit are running well ahead of what they have been in years past. (Many more are expected to sign up in coming weeks, as 50 million people live within a four to five hour drive of the city. Detroit has thousands of hotel rooms to accommodate these folks).

Everybody loves a city that will not stay down. In 2016, that’s Detroit.