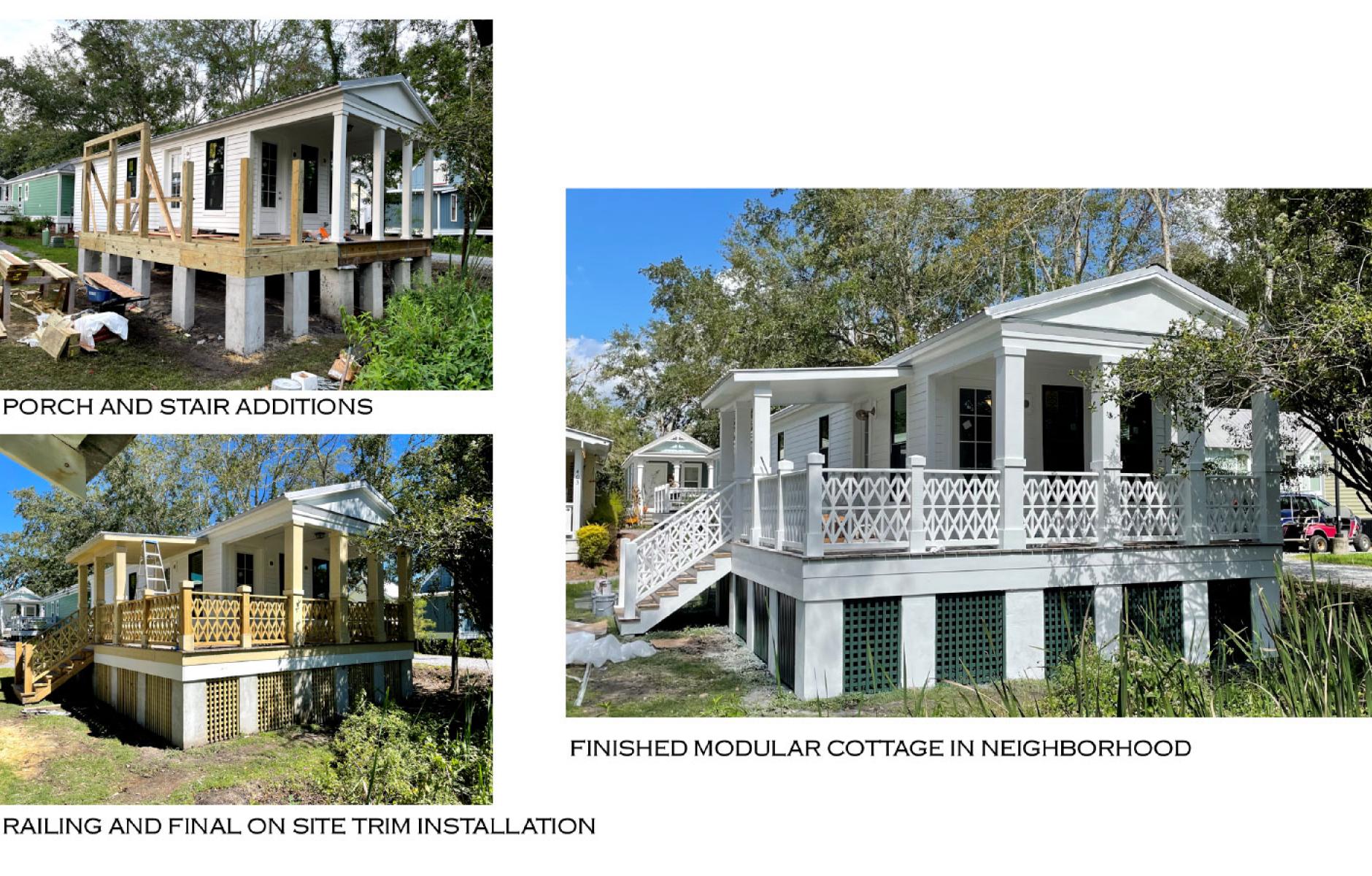 Good design is a low priority for houses made in a factory, but some architects and developers are trying to change the industry with a simple cottage that features a nicely detailed porch and roof lines.
ROBERT STEUTEVILLE   &nbspJAN. 9, 2023

Why do factory-built houses tend to look ugly? Why can’t they be cute, like a cottage that would fit into a walkable neighborhood? New urbanists have been wrestling with that question for many years.

Bruce Tolar, an architect based in Ocean Springs, Mississippi, asks: “Would you rather have a little manufactured house with the wrong-sloped roof and no porch, or would you like one that's very similar in square footage but has a great roof and a little bit of nice detailing on the porch?”

The assumption is that many home buyers would prefer the attractive cottage, and such a modular house recently won an Urban Guild Award. Built in the Franklin Homes factory in North Alabama, the house prototype was placed in Tolar’s development of cottages in Ocean Springs, Mississippi. “We have a tenant who’s very happy with it,” he says. “Now that we’ve done it, we can do it again under the right conditions. We hope to make that happen.”

The 504-square-foot, one-bedroom cottage is a product of Artifex, a firm that designs and develops cottages in mixed-use walkable locations. Principals are Tolar, David Kim, an architect who recently served on the CNU board, and small-scale developers John Anderson and Will Burgin. They’ve worked with Jen Krouse of Liberty House Plans on a business plan to make this kind of cottage more widely available.

The modular housing industry mostly focuses on engineering, rather than design, Krouse explains. Factory-built housing exhibits similar design problems to stick-built, production housing across the US—but new urbanists have had more success improving the design of the stick-built variety.

With rare exceptions, they have not yet been able to “crack the manufactured housing code” (The major exception was the Katrina Cottage, nearly 4,000 of which were produced after Hurricane Katrina, mostly in Mississippi). One problem: Until an economy of scale is achieved, it is more expensive to build well-designed modular houses compared to on-site construction, Krouse explains (however, modular houses can be built and installed in far less time). If well-designed modular houses were built regularly, the premium would disappear but the time advantage would remain, she says.

Much of the work in building a prototype like Tolar’s involves many rounds of design modifications. “Design is seen as something nice, not something that drives value,” says Krouse. “It can be difficult to break some of the habits that are engineering-centered.” With practice and training, however, Krouse believes that manufacturers could be good at building a variety of cottages similar to the one at Ocean Springs. To serve the entire nation and make the units widely available in most markets, about six factories would be needed in various US regions, she says.

Cottages could be shipped up to about 1,000 miles, according to Tolar. Shipping that far costs about $5,000, the economical limit. From North Alabama, that means modular cottages could be sent as far as Texas, North Carolina, or Florida.

As alluded to earlier, Artifex’s cottage has its roots in the Katrina Cottage, designed and built as an alternative to the unattractive “FEMA trailers,” supplied by the federal government in the wake of disasters. The Katrina Cottage was designed after Hurricane Katrina devasted the Gulf of Mexico coast in 2005. Lessons learned from that experience would enable this model to be applied to the broader housing crises, according to Artifex.

“With the right partners, getting from architectural design to engineered production to delivery and setting on-site is becoming a more predictable process” the firm notes. “That translates to greater potential for cost-effectiveness for those who design and develop residential and commercial infill and to more opportunity for those who want to live and work in those neighborhoods.”