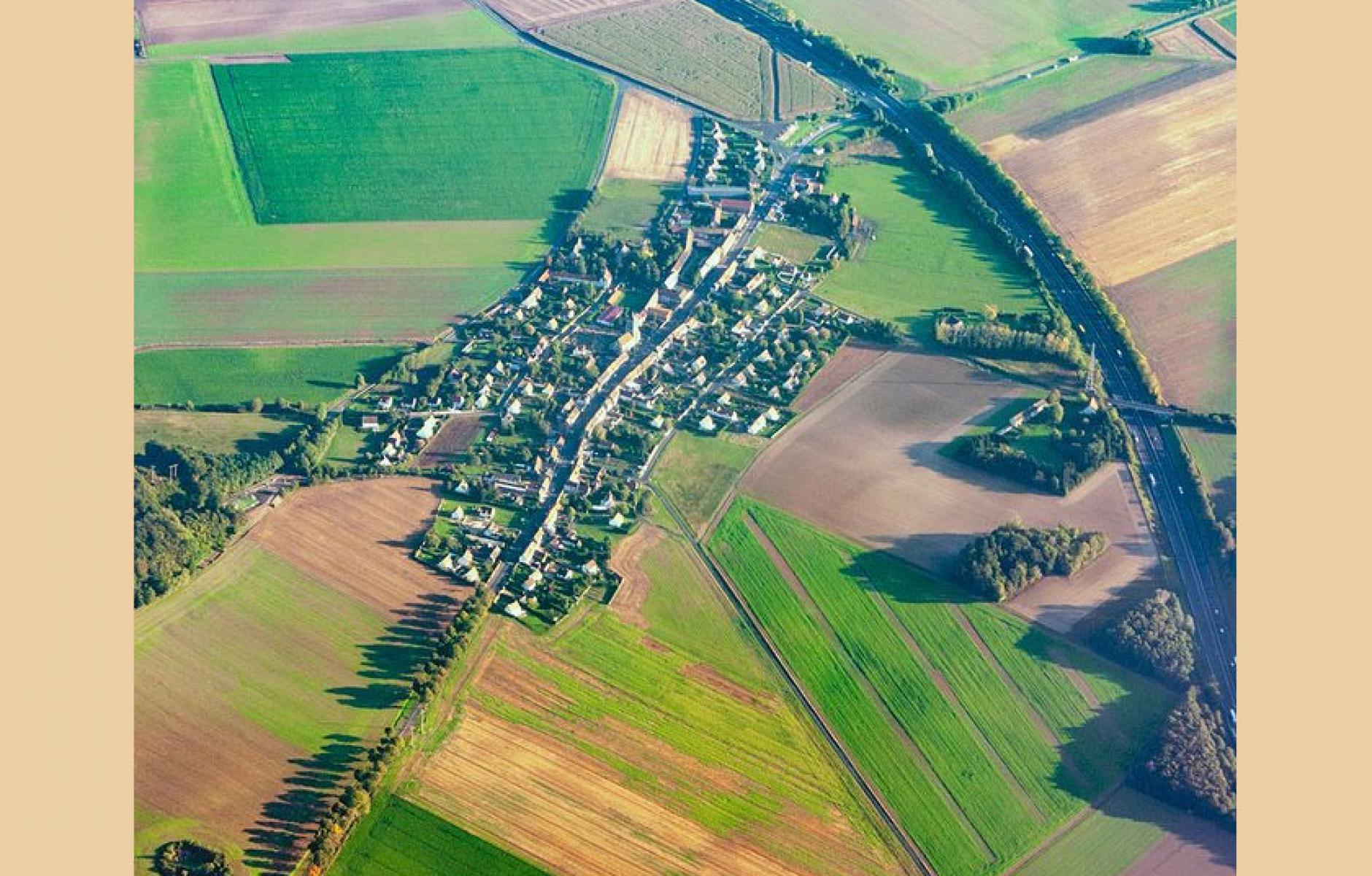 Villeneuve-sur-Verberie, from the air. Photo by Steve Mouzon.
Design

A viral Tweet highlights a village type that would be useful to analyze and replicate, and also touched a nerve.
ROBERT STEUTEVILLE   &nbspJAN. 5, 2023

Architect Steve Mouzon was looking out the window on the approach to Charles de Gaulle airport in Paris, and took a photo from what looks to be about a thousand feet up of a perfect village in the countryside, near a modern expressway.

Mouzon’s Tweet accompanying the photo shown at the top of this article unexpectedly was viewed nearly 5 million times (pretty good for an account with 12,000 followers). He wrote: “A French farming village surrounded by farmland, with nobody more than a couple blocks from long views into the countryside. An allée of trees welcoming you to town, the nearby expressway skirting by, leaving the village unmolested. What needs to change to do this in the US?”

The question provoked many defensive responses, objecting to an implied put-down of the US. Some asserted there are towns like this all across middle America. The tone of those posts can be summarized as follows: “Dude, this is literally my neighborhood,” or, “get out of the city, there are places like this all over Ohio.”

Yes, there are thousands of small towns in America—some of them quite charming. There are very few—maybe none—that have the compactness, the clean edge abruptly changing to open countryside on all sides, and the completely intact center (no parking lots), shown in this photo. The difference is large between the village, which Mouzon identified later as Villeneuve-sur-Verberie, and just about any American town you can name.

So what, and why should we care? Mouzon shared this photo to show a type of village that would be useful to design in many locations, because it is sustainable and offers a high quality of life. New urbanists have spent relatively little time analyzing various types of hamlets and villages, according to Mouzon, who suggests that this place type needs more study.

Mouzon has a very practiced eye for design, and his knowledge of building types and urban form told him a lot about Villeneuve-sur-Verberie, even from the window of a jet plane. As he wrote to me in an email: “Here’s why we need it in the toolbox: it’s about 600 people on 60 acres, complete with a decent mix of village-scale uses. In US sprawl, those same 600 people would spread over about 240 acres and have to drive to everything.”

The quality of life in this village is enhanced by mixed-use amenities in the center, including, very likely, third places like a café, and a direct connection to nature in all directions. These amenities are within a two- or three-minute walk of each inhabitant.

This village type is very efficient, and enhances, rather than detracts, from the beauty of the French countryside. In email chains among urbanists, some offered ideas on how that clean edge was maintained—such as higher-value farmland (discouraging low-density development), public policy that maximizes productive land for agriculture, and more regulation of development. Mouzon suggests that it is partly cultural. In the years after towns in Normandy were bombed to rubble in the Allied invasion of WW II, they were rebuilt stone by stone. That approach is hard to imagine in the US. We'd have built a mall.

American small towns are different. They are more spread out. The edges are not so distinct, and they are usually marred by sprawl, such as subdivisions, fast-food restaurants, strip malls, convenience stores, and the like. That said, I am a big fan of American small towns and villages and they have a lot to offer. In the words of a song, we built towns “scattered like fireflies across the dark night.” They still exist coast to coast and can be strengthened with good design and thoughtful planning.

I don’t necessarily think we need to import French culture to do that. But Mouzon is right—we need to study types of towns, just like we have studied types of “missing middle” housing. There is value to the compact connection to nature and mixed-use shown in the aerial photo.

Of the hundreds (maybe more than a thousand) responses to Mouzon’s tweet, none that I saw answered his original question, which is a good one: What needs to change to do this in the US? The implication of that question is not whether the US could ever have done that, anytime in history. Clearly, we were capable of that at one time, although we had a different culture and therefore unique style of architecture and urban design. No, he is asking what would be necessary today.

I’d say the following would be needed: No zoning (or a very specific form-based code), no parking regulations, no state DOT, and an excellent new urbanist developer could probably pull it off. The countryside would still look different.

That’s obviously difficult to achieve, especially the “no DOT” part. In the US, there would probably be a designated state highway running directly through the center of the town, degrading the public realm. Maybe, someday, the engineers and transportation planners of the DOT will help, rather than hinder, the creation of great urban places.

Planner Andres Duany had a simpler, yet more sophisticated idea. He says that urbanists should “Analyze the secret sauce of that photo. Of that place.” In other words, a skilled urban designer would need to study Villeneuve-sur-Verberie, on the ground, and figure out what really makes it beautiful and livable. That approach is necessary, because making it possible is not the same thing as making it happen. The latter requires sophisticated on-the-ground analysis—there’s only so much that you can learn from a thousand feet in the air, even if you are Steve Mouzon.

In emails, Mouzon posed another question: This Tweet reached millions of people, and, despite controversy, it got a lot of people thinking. How can urbanists duplicate that kind of engagement? There is always an intangible quality to creating a viral post, and no one came up with a brilliant strategy. But to me, the answer is clear: Praise the French, especially in comparison to anything in the US. That will always get a strong response.