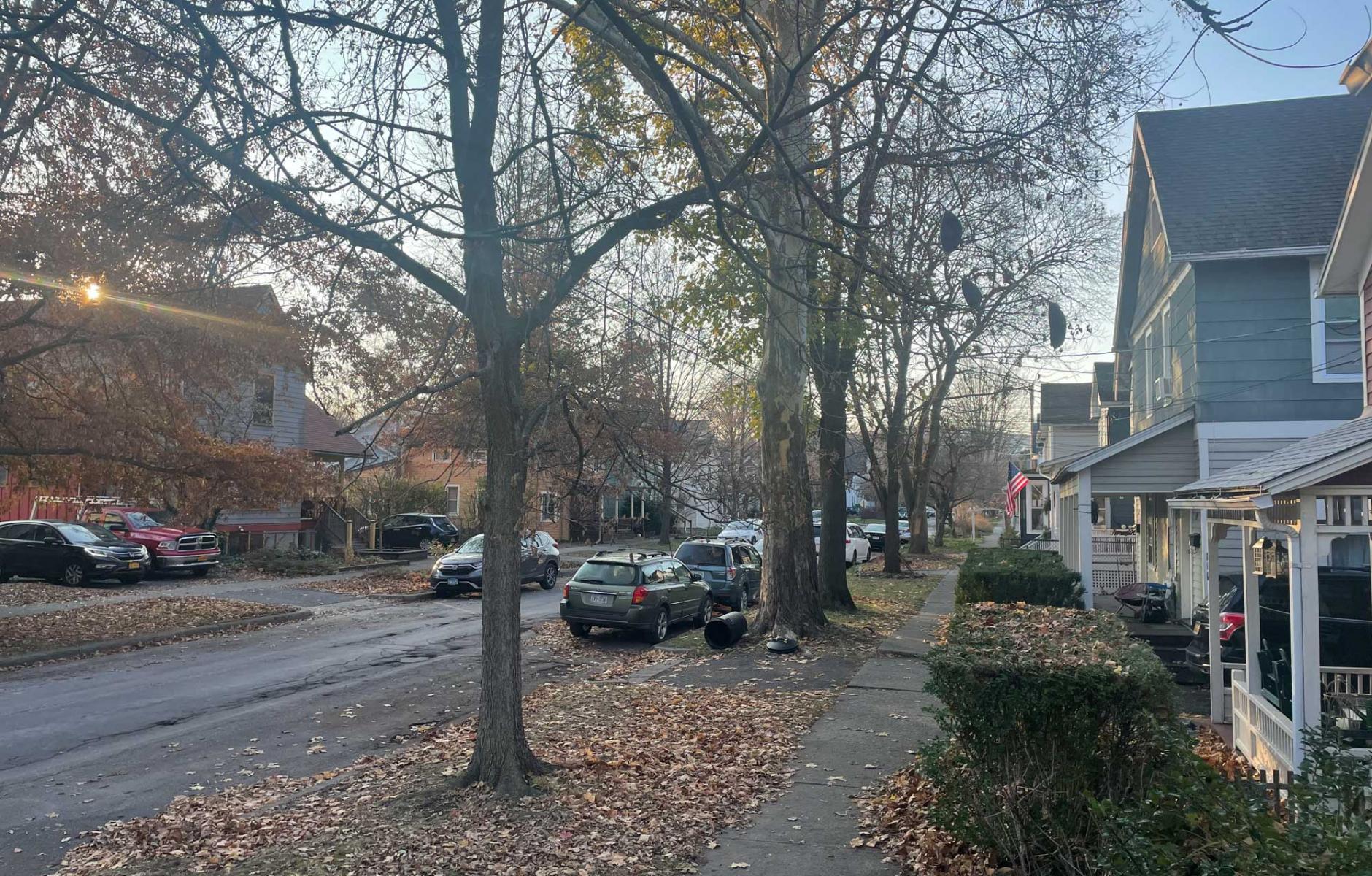 Utica Street in Ithaca, where I live. Photo by Robert Steuteville
City life

On Thanksgiving, it matters where you walk

This holiday, experience the magic of a city or town. Let that become part of your family experience. It may change your life.
ROBERT STEUTEVILLE   &nbspNOV. 23, 2022

To me, Thanksgiving smells of cool gray skies, bare trees, decaying leaves, and an old town in Connecticut. That’s where we spent many Thanksgivings when I was a child—at the 19th Century house of an aunt and uncle.

We always went for a walk—several walks—the older and younger generations together with history around us. While catching up on news and stories, we absorbed the town by osmosis. In a world where people tend to drive on busy highways, walks can be inspirational. But it matters where you walk.

For example, architect Steve Mouzon tells the story of a 1980 walk in a small town of Alabama with his wife, Wanda, and sister, that changed their lives. Mouzon, author of The Original Green, has spent a career in the New Urbanism and his sister, urban designer Susan Henderson, is the current CNU board chair. The house where the family gathered was located in a typical suburb. They needed a place to burn off the mashed potatoes and turkey—so they went to the historic town called Mooresville for the afternoon.

An architectural student at the time, Mouzon realized that a town built without architects can be better than anything that had been designed in recent decades using the latest technology and architectural theories. All three have since dedicated much of their working lives to seek ways to re-create the magic that they experienced the day after Thanksgiving more than 40 years ago.

Another Thanksgiving, in 1995, changed my life. My story takes place in a town in Pennsylvania called Mechanicsburg where my sister lived. I had been noticing something similar to Mouzon for a decade or so. I was a journalist in the trade publishing field.

On that Thanksgiving, my family gathered in a suburban house on the outskirts of the 19th Century town. I had driven a few hours to get there. Like Mouzon, we would go into the old town to walk. Thinking things over as I admired the Main Street, it popped into my head to become a publisher in the field of New Urbanism. Up to that time, that job description did not exist.

My publication would be called New Urban News and over the weekend I wrote an eight-page business plan that turned out to be about 90 percent wrong. Some of that 90 percent was underestimating the demand for news on this trend. I got to work, and by April of 1996 I had my first issue printed in time for CNU IV in Charleston, where I signed the Charter of the New Urbanism.

Like the Mouzons, and Henderson and thousands of CNU members and fellow travelers, I’ve experienced a profound shift in my life’s work. I am grateful to participate in this movement that has changed the shape of the built environment in America and other parts of the world. And I am thankful for that Thanksgiving when the idea occurred to me.

Walking triggers memories, and so many memories come to mind this time of year. Too often, we forget what is important. For several generations in the second half of the 20th Century, we forgot about neighborhoods and communities and the art of how they come together. In many ways, the Charter is an act of memory. Here’s how it begins:

The word “legacy” implies something that is given—which is half of the holiday this week. The other half is thankfulness.  We can be grateful for our families, and friends, and the cities and towns that nurture our lives. Many of us will be gathering in such places. Or, even if we are not—we can find a place nearby where we can walk. It may be a Main Street, a town, a neighborhood in a city—or even a new urban place.

Home is more than a building. It’s also a street, block, neighborhood, and a community. It’s a place where multiple families can meet in the public realm and work off excess calories as they catch up on personal and family news.

If you go someplace for Thanksgiving, look around you. Does the place have magic? If so, stop and experience it.  Walk around and let it become part of you, as you become part of it.

It matters where we walk. While we are walking, we may meet someone, or get an idea, that changes our lives and the lives of the people around us.

Note: A version of this essay previously appeared in Public Square.