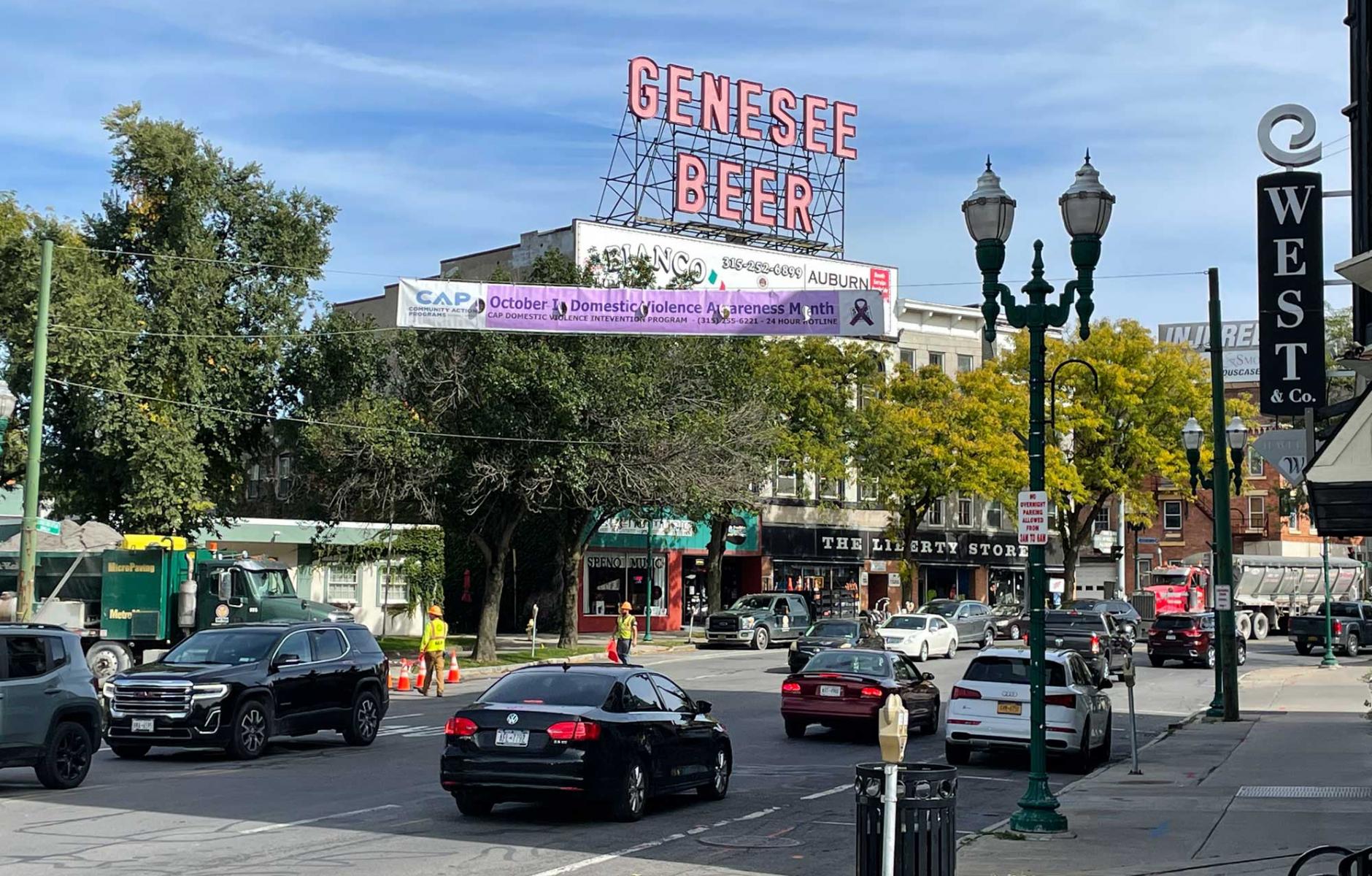 In the unlucky rust belt, an overlooked 15-minute city

For those who seek affordable, diverse urbanism in a community that needs committed residents, smaller, working-class cities have much to offer. Here's one in particular with 21st Century potential.
ROBERT STEUTEVILLE   &nbspNOV. 16, 2022

A cynic might say that Auburn, New York, has no hope. It’s a small city (population 26,000), outside of any metropolitan area, where much of its industry vanished in the 20th Century. Its median household income is only $43,555, 38 percent below the national average. Moreover, Auburn is still disfigured by the demolition of at least half of its downtown in a sad frenzy of highway building and “urban renewal” in the early 1970s. (For a compelling first-hand account of that tragedy, read urban writer and Auburn native William Fulton’s essay in his 2022 book, Place and Prosperity).

Auburn is light years, economically, behind metropolises like Paris, Barcelona, New York, Boston, or Vancouver, which benefit from significant international capital and prestige. Urban researcher Richard Florida, in his book Winner-Take-All Cities, writes that only a few cities are attracting the lion’s share of high-end capital and technology, while other cities get little or nothing. “This small group of elite places forge ever forward, while most others struggle, stagnate, or fall behind,” he explains. In Florida’s world, unlucky cities would include Rochester, 55 miles to Auburn’s west, or Syracuse, 25 miles to the east. Both cities are much bigger than Auburn, with economic advantages to match. As a city that is barely known outside of its immediate area, Auburn is falling behind even those that are falling behind.

Fulton’s essay drew me to Auburn, just 35 miles north of my neighborhood in Ithaca, New York, to check it out. A quick search on Zillow led me to believe that Auburn must be shot through with poverty. Today, you find home prices that include 39k, 50k, 45k, 57k, throughout the city. What I experienced, when I walked through the city, was, surprising: I found mostly functional, working-class neighborhoods.

Auburn and the 15-minute city

After spending a few days in Auburn, I think it has potential to thrive in the 21st Century—and more opportunity than many analysts would assume. The gold standard in planning today is the “15-minute city,” where you have access to everything you need in 15 minutes of walking or biking. It is often assumed that only the top-tier cities have a chance to meet the much-admired “15-minute city” standard, but that concept is often misunderstood.

The 15-minute city is more than just a mixed-use, walkable metropolis where you can get by without a car. It is actually composed of nested, human-powered transportation sheds, on a semi-regional scale (up to 28 square miles). Those sheds must include a great diversity of activities and people, and the latter category is where star cities may fall short. Top-tier cities are often so expensive that middle-class families, let alone the working class, cannot afford to live there. Auburn, by contrast, retains many qualities of a 15-minute city, while remaining affordable to even working-class people. Moreover, there are many small cities like Auburn across America. Although the 20th Century was rough on those cities, the 21st Century may well see the pendulum swing back again.

Not that long ago, within Fulton’s lifetime, Auburn was a microcosm of urban vitality—like a big city in miniature. It was self-sufficient, because people rarely were compelled to leave when Fulton, a Baby Boomer, was growing up. There is still something of that quality left. As Fulton says, “Half the historic downtown may be gone, but the other half is pretty great.” My own view is that Auburn, in its current shape, is not exactly “great,” or “pretty,” but it still has heart, good bones, and affordability.

Geographically, Auburn is small enough that the entire city fits easily within a 15-minute bicycle shed. At the middle is downtown, centered on the intersection of the major east-west and north-south streets. Auburn has no big hills, and so downtown is easily reached by bicycle from any neighborhood. It has a few decent restaurants and the requisite brew pub, other hangouts like bars and coffee shops, cultural attractions and historic buildings, government services, retail, and employment.

The local beer is called Prison City. Within view of the brewpub is Auburn Correctional Facility, a highly unusual feature near the center of any city. With 1,800 inmates, this state prison is a major employer downtown. It’s also one of the oldest prisons in the US, operating for more than two centuries. The gates come right up to the sidewalk, with on-street parking (none required for the incarcerated). Due to the urban frontage, the prison doesn’t disrupt the urban fabric to anywhere near the degree that a new facility would (and I doubt any prison would be built within walking distance of a downtown today).

Another unexpected downtown feature is Wegmans—one of the top-ranked and most-sought-after supermarket chains in America, and the third-best US firm to work for in 2022, according to Fortune magazine. The Wegmans store is lousy from an urban design point of view, presenting a blank wall to the city’s main street. However, Fulton writes that many people believe Wegmans is the “heart and soul” of downtown. For a city of Auburn’s income, the store is an extremely lucky asset.

Wegmans sells pretty much everything most people need on a weekly basis, easily within a 15-minute bicycle ride of everyone in the city. It’s also a social center. In my two-day stay, I shopped at Wegmans twice, bought a submarine sandwich for lunch, and used their bathroom facilities when I was walking around. I passed it by about a dozen times.

Auburn is divided into four quadrants and built on a grid. Each quadrant has multiple neighborhoods and districts. Most of the manufacturing, including a steel mill, and associated neighborhoods are in the northwest quadrant. How many so-called “15-minute cities,” by the way, can boast an operating steel mill? The mill is relatively modern, having been constructed and expanded in the last 50 years, recruited to Auburn by many of the same officials that tore down half of downtown. (You could say that you win some, you lose some).

The northeast quadrant has a Community College—the city’s only higher education—a community hospital, big box stores, and several neighborhoods. The southwest quadrant has some industrial uses, including the Finger Lakes Railway—both a tourism and freight railroad—another supermarket (Tops), and more neighborhoods. The southeast quadrant, the smallest of the four, is largely residential, and contains the city’s high school and the waterfront of Owasco Lake—one of a New York’s Finger Lakes—with its high-value properties and parks (the lake is slightly outside of the municipal boundary, but functions as an important asset to the city).

Auburn has very little sprawl, since the city did not grow after World War II. There is an enclosed mall on the outskirts, but it is mostly vacant today. The modern subdivisions that exist are in the prosperous area near the lake. Other than that, Auburn transitions quickly to countryside.

In Fulton’s day, many of the neighborhoods were ethnic, and some still retain ethnic flavor today. They all had little businesses and corner stores. Today, the neighborhood mixed-use is more often a convenience store/gas station, or a chain drug store. The modern retail doesn’t have the same character as mom-and-pop stores, but it does allow for daily needs to be accessible within walking distance.

The quantity and quality of neighborhood businesses amount to a big difference between unaffordable, world-class urbanism and a working-class city like Auburn. In Auburn, you don’t get excellent coffee around the corner, but you probably can get milk within a quarter mile. For a good cup of coffee, you head downtown or make it yourself. To be sure, there are also many small, local, businesses in the city. I shopped at a locally owned clothing store, and a music store with a good collection of vinyl. Both of these were downtown, but neighborhoods also have some small businesses.

To sum up the 15-minute city qualities, Auburn has a version of nearly everything that is needed for living—employment, education, health care, retail, government services, parks and recreation, entertainment, culture—within a 15-minute bicycle shed. Within the city are many neighborhoods, on the scale of a 5-minute walk, with their own diversity and mixed-use.

The considerable scars of urban renewal are not insurmountable barriers. As ably recounted by Fulton, city officials built a tiny loop road around the heart of downtown, knocking down half of downtown in the process. At the same time, state officials built an arterial road—technically a pair of one-way couplets—to relieve traffic on Genesee Street, the main drag, leveling even more historic fabric. These are suburban-style streets in and around downtown, which carry little traffic today. In the every-dark-cloud-has-a-silver-lining department, the lack of traffic makes these thoroughfares easier to cross on foot or bicycle than they otherwise would be. On the downside, the Arterial does sever the grid at a number of north-south points.

Bicycle planning is critical to the 15-minute city, and Auburn has a dearth of bicycle infrastructure, although the street grid provides some level of bike accommodations. In many cases, the automobile-oriented planning of the 20th Century makes bicycling harder. And yet, the city is relatively flat and traffic is not heavy. You can get most places by bicycle in 10 minutes or less.

After Fulton left Auburn as a young man with what he calls “urban PTSD,” he sought a place with similar qualities to his childhood city—that which had vanished almost overnight. “But at the time I was looking, it seemed impossible to imagine that this kind of small-town urbanism would ever exist again anywhere in the United States.”

Fulton eventually settled on Ventura, California, a unique small city in what has become a very expensive metro area. Are there 15-minute cities yet attainable to the broad swath of American public? Are there such places available today with plenty of potential upside in the next few decades?

To be sure, Auburn could use a lot of work—both downtown and in its neighborhoods—enough to keep the next generation of city builders busy. In spite of Florida's dim view, macro trends could be the city's friend. Auburn is listed as a “receiver place” by the nonprofit Place Initiative. For future climate migrants, it could be a destination.

Auburn may be overlooked, yet also could be among a class of attainable 15-minute cities with opportunity for diverse households seeking walkable neighborhoods.