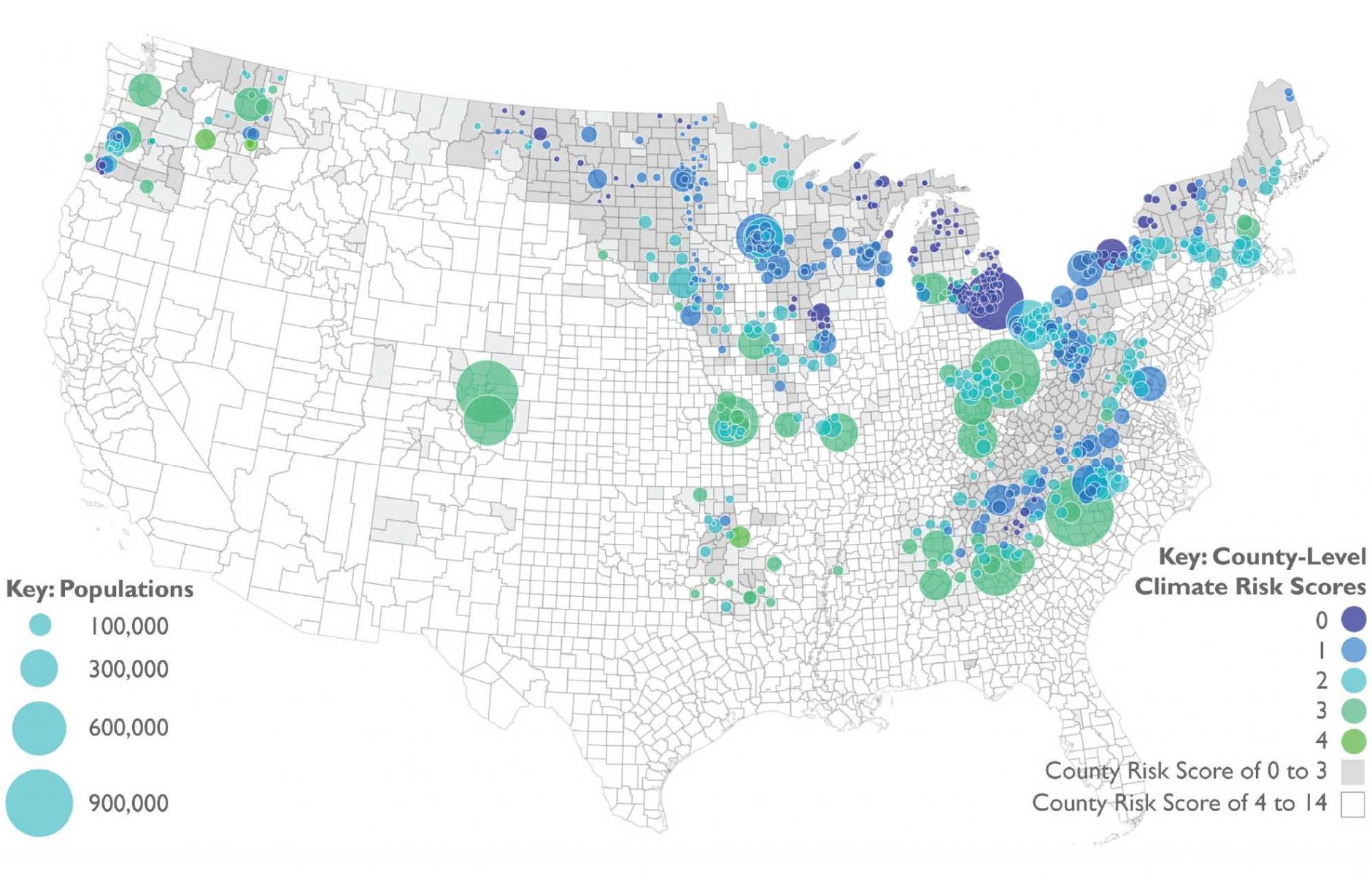 Climate receiver places in the US. Source: Place Initiative.
Sustainability

What cities will receive climate migrants?

A group of urbanists has compiled a list of “receiver cities and towns” from across the US, and identified principles for how communities can become more resilient to climate change.
ROBERT STEUTEVILLE   &nbspAPR. 6, 2022

In new urbanists circles, there has been talk for years about “receiver cities”—places that are likely to gain migrants as climate change problems grow—but nobody has carefully defined what that means, until now.

Place Initiative, an organization of young urbanists focusing on climate and equity, recently released two reports on receiver cities and towns. One defines the principles of local climate change adaptation and mitigation, and another provides 616 examples of these communities from across the US.

The Receiving Geography Guide is the first major attempt to define receiver cities in terms of real places that do—or could—qualify. Although the authors caution that the list is not comprehensive—especially with regards to small towns—it nevertheless is big enough to offer a picture of what these communities of all sizes might look like.

Expect that a lot of people will move to Michigan and Minnesota as climate problems grow. Those two states have the most communities on the list, with 102 and 72 respectively, followed by Ohio (51) and New York State (49)—where I live.

Overall, there are 46 large cities above 100,000 in population, 160 medium sized towns (20,000-100,000 population), 256 small towns (5,000-20,000 people), and 154 “tiny” towns under 5,000 people on the list. Without exception, these municipalities are located a distance from the coast. They also tend to be north of the Sunbelt, although there are exceptions. Florida has no communities on the receiver cities list, and Texas has three. From the group’s perspective, those states are too vulnerable to long-term climate change to contain many receiver cities. On the other hand, Alabama has seven, and North Carolina has 25. Place Initiative explained how they compiled the list:

Through a meta-analysis, we have determined regions with relatively low climate change risk exposure in the continental United States. From here, we factored in localized flooding risk and well-connected infrastructure systems that lend themselves well to building resilient communities.

Well-connected infrastructure systems mean mixed-use, walkable places where households can get by without an automobile—or at least with a “car-lite” lifestyle. These are often traditional, formerly industrial, cities and towns in the interior part of the US.

I was mildly disappointed that my own city—Ithaca, NY—did not make the list. It qualifies in terms of relatively low climate change risk and good urban form. It has one of the highest walk-to-work rates in the nation, at 40-percent-plus. But according to at least one analysis, Ithaca has a severe local flooding risk. The city sits at the bottom of three hills, and about once a century it experiences a major flood. But since the last major flood, 1935, a flood control channel and a dam or two have been built to contain severe stormwater events. Baxter Hankin, one of the report’s authors, says that Ithaca could be a receiver city, just not in the top tier of geographically situated places.

Identifying “receiver cities” is not an exact science, and people are ultimately going to vote with their feet. And yet the general assumptions seem sound. A shift in population inland and northward as a result of climate trends is likely, and cities and towns with urban form that allows choice in mobility will be more resilient and sustainable.

Furthermore, the concept of receiver cities is not static, but evolving depending on how the communities respond to climate issues. The 616 communities are not necessarily dealing well with the climate threat well now, but have the “potential” to up their game. The companion report to the Geography Guide is aimed at that goal.

These selected geographies are not necessarily already adapting successfully to climate change. Rather, they are geographies with the potential to successfully do so, provided they follow our Community Principles Guide.

The research and reports by Place Initiative represent an ambitious contribution to the field of planning for long-term climate change and risk. Moreover, the principles laid out in the report will be useful for many planners regardless of whether the particular city or town is on the list. What about the municipalities that do make the list? It would not hurt to begin preparing now.