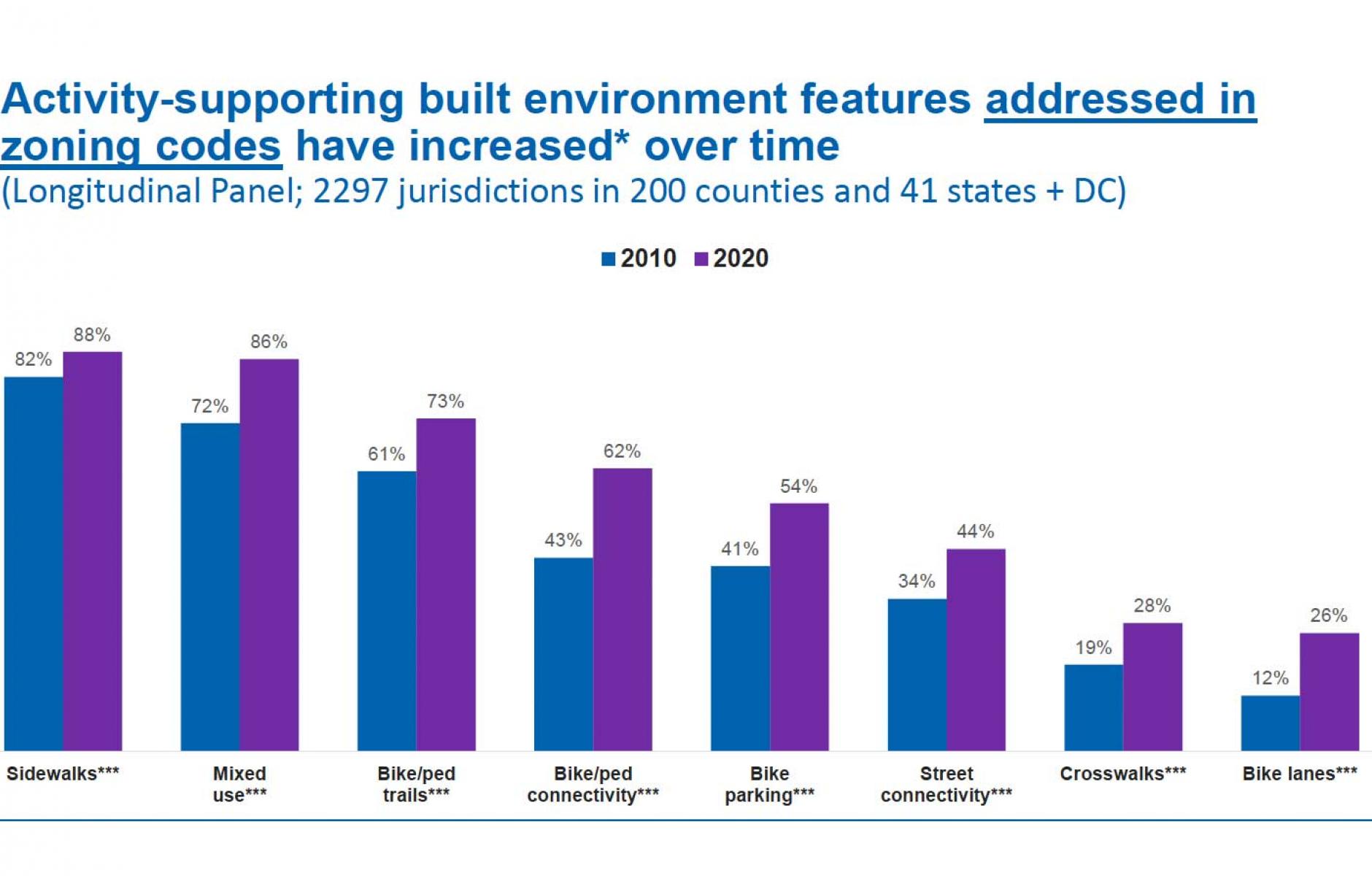 Zoning that supports physical activity rising in the US

A longitudinal study found a 53 percent increase in new urbanist type zoning in the US during the previous decade, and support for infrastructure that boosts physical activity, and ultimately, health.
ROBERT STEUTEVILLE   &nbspNOV. 15, 2022

New-urbanist-type zoning codes rose 53 percent across the US over the previous decade, according to research by the CDC-funded Physical Activity Policy Research and Evaluation Network (PAPREN). Across the board, this type of zoning promotes more sidewalks, mixed-use, bicycle-pedestrian trails, bicycle-pedestrian connectivity, street connectivity, crosswalks, bicycle lanes, and bicycle parking.

In other words, more zoning codes are calling for infrastructure that facilitates walking, bicycling, and non-automotive travel in daily life, PAPREN finds. The codes reflect the intentions of cities, but will need public and private investment to realize these goals.

If so, zoning reform could have a profound impact, over time, on the degree to which Americans’ day-to-day activities promote health, as analyzed by the organization’s Applied Evaluation project. The graph below shows how code reform is addressing these issues, compared to conventional codes.

The study looked at about 2,300 municipalities in 200 of the most populous counties in the US, accounting for 55 percent of the US population. While research focused on the larger metro regions, the counties include small towns and rural areas, notes Jamie Chriqui, a professor at the University of Illinois at Chicago, and co-director of PAPREN.

Some highlights from the study:

PAPREN’s is the first longitudinal study to compare growth of new urbanist codes, relative to conventional zoning, in a way that is fairly comprehensive nationwide. The project is also the first to correlate these codes to infrastructure objectives. Previous research by a different group, the Codes Study, has tracked the rising total number of form-based codes, which tracks with PAPREN’s findings. A 2021 study last year explored the question of whether form-based codes tend to lead to gentrification, and concluded that they do not. The author of that analysis, Emily Talen, also notes, through a literature search, the positive impacts from FBCs on physical and environmental well-being. That aligns with PAPREN on the growth of codes that call for infrastructure in support of physical activity and less automobile use.

Zoning code reforms emerged in the US as a policy strategy to reduce sprawl and reliance on cars, and increase physical activity, says Chriqui.

This will not be a surprise to new urbanists, but the reforms seek to:

For public health officials, zoning may not be on their radar. PAPREN’s research shows that it should be, because code reform has an impact on infrastructure policy that supports pedestrians and bicyclists.