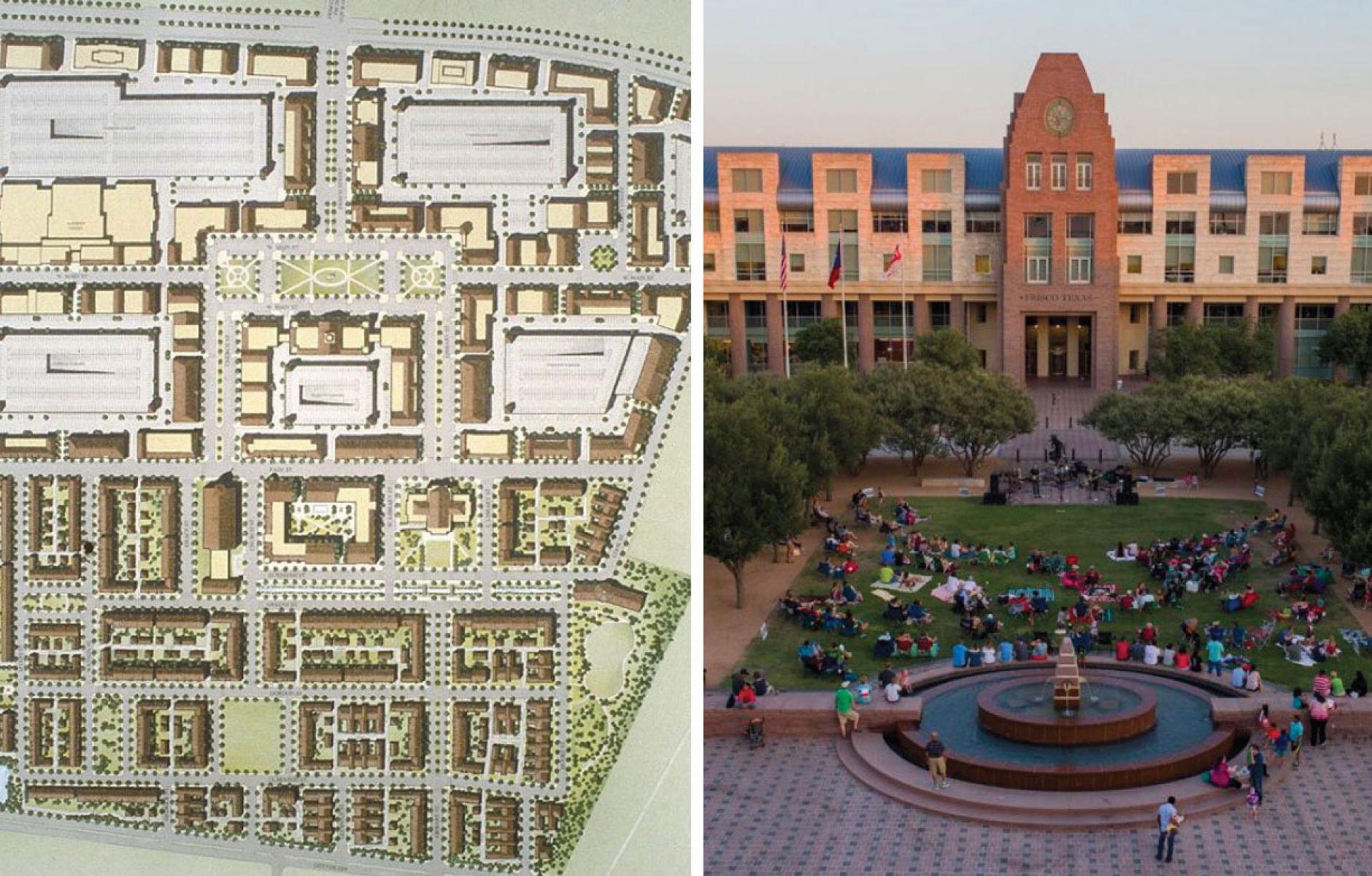 2002 plan, and Frisco City Hall and square at the center.
Policy

Frisco, Texas, has been one of the fastest growing cities in the US over the last three decades, going from a small town of 6,000 in 1990 to more than 200,000 today. In the 1990s, when the city north of Dallas began to boom, officials acquired land for civic buildings like a city hall and police station, to be built in a typical suburban fashion adjacent to the old downtown.

Through far-sighted leadership at the turn of the millennium, a pedestrian-oriented plan was created for 150 acres, with civic buildings anchoring a new downtown, adjacent to a historic main street area. The $1 billion, 4.4 million square foot Frisco Square development plan established a street network with connections to the old downtown. A new code governed street sections and pedestrian orientation for buildings.

The idea is that the larger city needs a larger downtown that serves many purposes—with a high-quality public realm open to all citizens in a diverse community (more than half of the population is not white). Frisco Square construction began in the mid 2000s, was set back a few years by the Great Recession, and is now nearly three-quarters built. When finished in about 2030, Frisco Square will include 2,000 living spaces, including townhouses, condominiums, live/work units, and apartment buildings—in addition to 2 million square feet of mixed-use commercial space.

The historical styles contribute aesthetic diversity, but also relate to the city’s core.

“When we did the zoning of Frisco Square in 2000 it was very important for the city that we do not turn our back to the historical downtown,” Director of Development Services John Lettellier said. “So, we had to figure out a way to make [Frisco Square] an extension of downtown because downtown is part of the roots of the city.”

While retaining the basic structure and purpose of the 20-year-old plan, the specific urban design and architecture have evolved over the years in response to changing conditions and new ideas brought on by personnel and investors. Good urbanism is about a diversity of designers, and many firms have contributed to Frisco Square, in addition to Torti Gallas: David Schwarz Architects (which completed the original 2002 plan), RTKL, TBG, Opticos Design, and various developers and architects of individual buildings. The development partners include the City of Frisco, BK Development, Five Star Development, and Arcadia Realty Corporation.