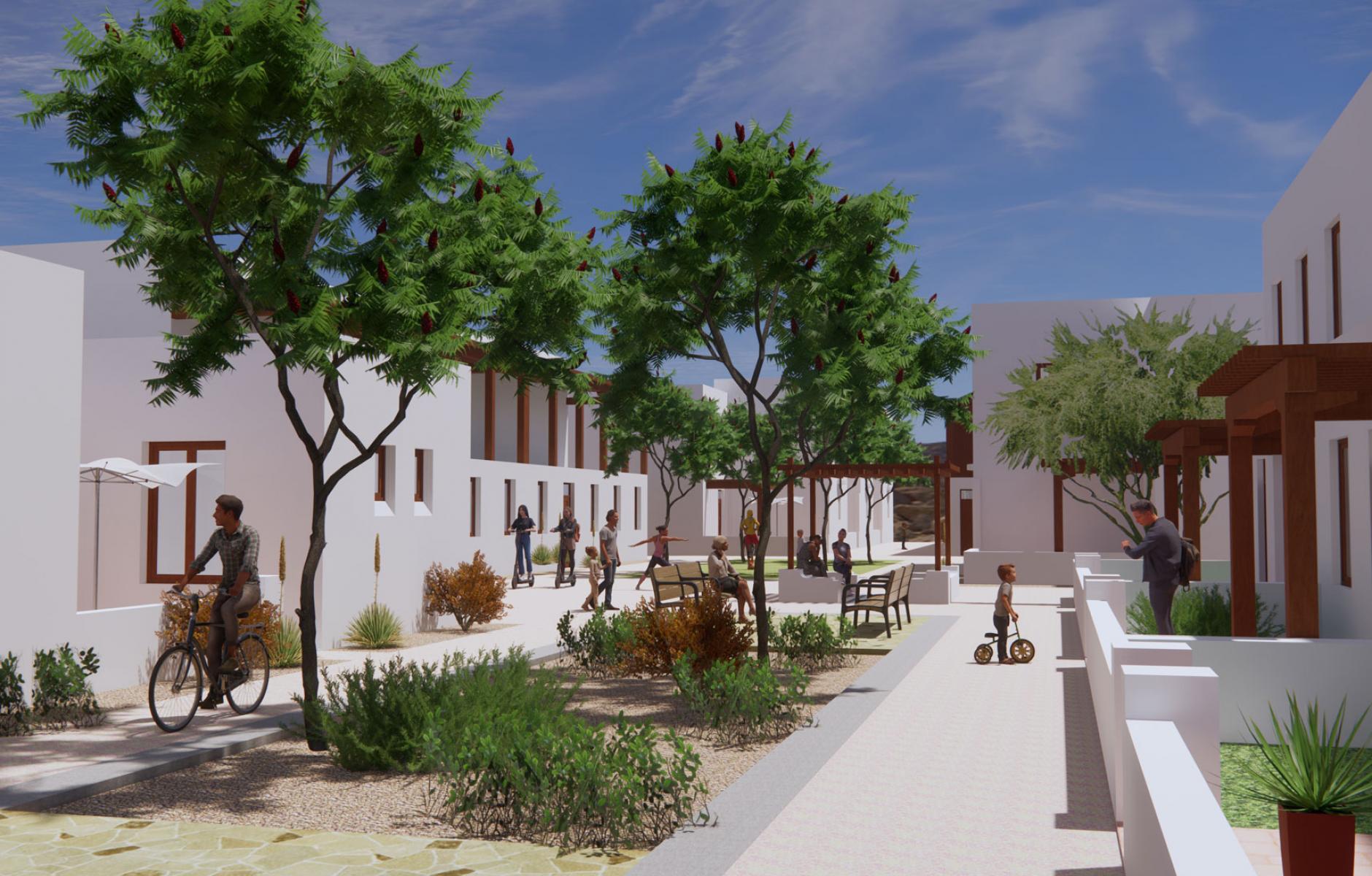 The City of Las Cruces is planning an "aspirational" Transect-based neighborhood that includes modular housing on a publicly owned site.
ROBERT STEUTEVILLE   &nbspJUL. 13, 2022

The City of Las Cruces, New Mexico, is planning a major new urban neighborhood on 150 acres of city owned land about three miles east of downtown.

The East Lohman Development Plan calls for nearly 1,000 residential units, with an emphasis on affordable housing. The plan includes a new transit center for the east side of the city and preservation of open space, especially an arroyo habitat.

The site is adjacent to an existing medical center and calls for about 30,000 square feet of medical office. The “aspirational planning objectives included a focus on healthy living, attainable housing, multi-modal transportation, and sustainable land development,” according to Sites Southwest, the design firm that is working with the city. “With a large portion of the planning area owned by the city, the planning team were allowed to be more aspirational than a purely profit-driven planning effort.”

The plan proposes an innovative, modular housing system in the form of a “Pedestrian Village” adjacent to the town green. The system can accommodate a variety of residential unit types, in a variety of sizes, which all fit within a 30-foot by 40-foot footprint. The units are assembled around pedestrian-only "streets” in a variety of configurations “to create interesting urban spaces,” the design firm explained.

The project was initiated by the City of Las Cruces. With sprawl development encroaching on the city-owned property, the city decided to establish a plan and vision to guide future development. The City's 2020 Comprehensive Plan designates the site as a “Neighborhood Center.” The East Lohman plan, named after the thoroughfare that borders the property, explores the form that such walkable centers could take. Much of the site formerly served as a landfill, and is undergoing cleanup and site preparation. The site includes elements of brownfield, greenfield, and infill development, according to the designers.

During the virtual charrette in 2021, the idea emerged that “healthy living” would be a significant goal, inspired by the proximity of the medical center and the nearby Organ Mountains, which are a popular recreational destination. The major impact of this goal on the plan is to incorporate a system of pedestrian and bicycle paths that feed into a regional network and connect to a public recreation complex.

A two-acre “town green” was situated at the center, with enough room for spontaneous physical activity. This green was located for the best views of the mountains. In addition to medical offices, the plan calls for a continuing care retirement community (CCRC) in the development.

The master plan was created with an understanding of the rural-to-urban Transect and its potential to inform decisions about street design, building types and open spaces, the firm says. The transit center is also envisioned to incorporate micromobility, such as e-bikes and small electric vehicles. The plan also includes a mixed-use center with main street retail and a “shared street” design.