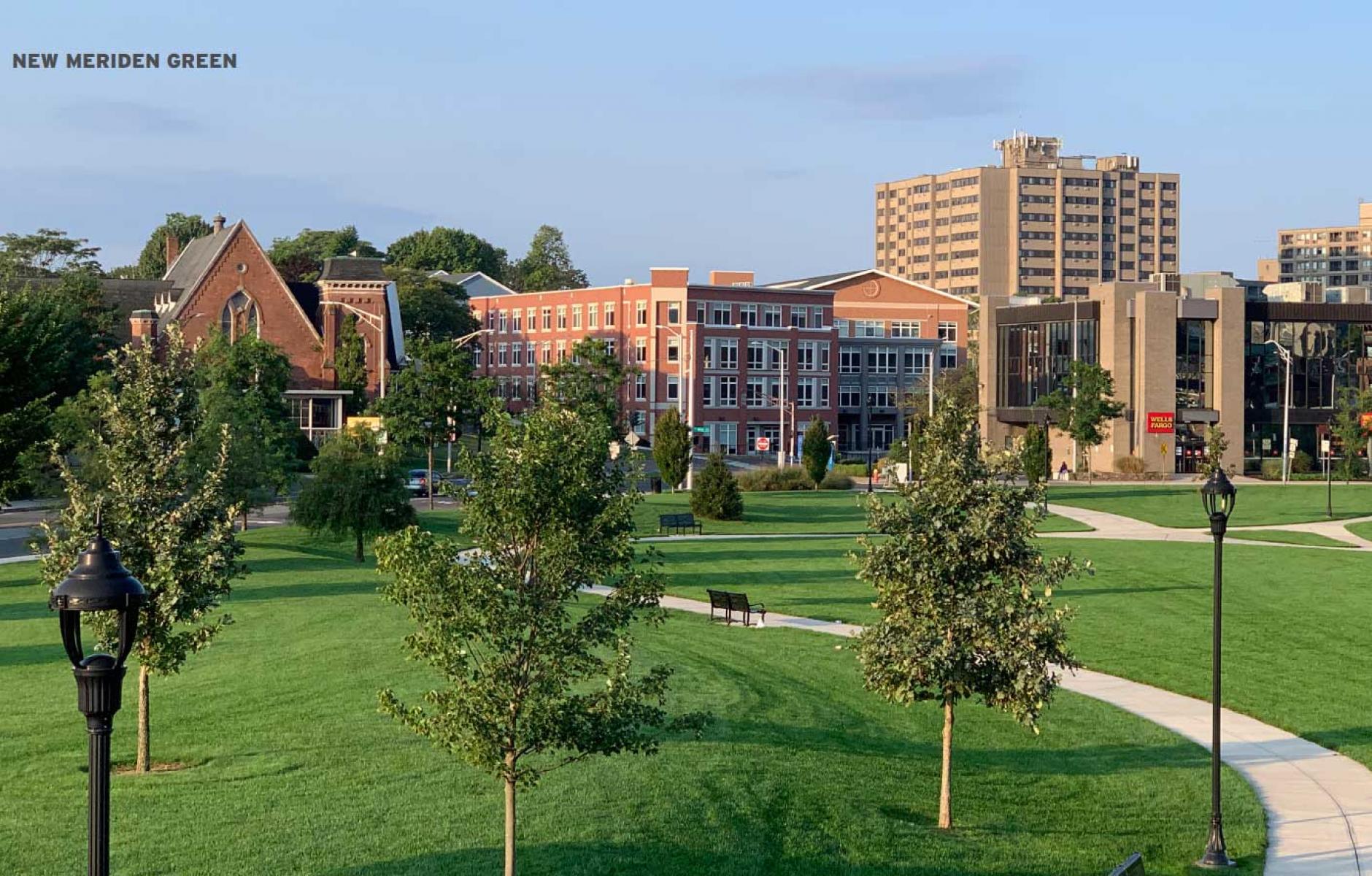 A New England-style green creates the site for mixed-use and affordable housing at the center of a historic city.
ROBERT STEUTEVILLE   &nbspJUN. 14, 2022

Meriden, Connecticut, tore down its industrial heart in the middle of the 20th Century to build an enclosed shopping mall that soon failed, replaced by a strip mall that flooded, replaced by offices that were flooded and demolished.

The series of fiascos at the center of this city of 60,000, midway between New Haven and Hartford, raised the question: How does a mid-sized city successfully fill a hole in the urban fabric created by badly conceived “urban renewal?”

When the mall was built, a stream was buried, which led to the flooding problems. The city daylit this stream in the last decade, creating a new “town green,” a common New England feature that was missing in Meriden.

The 14-acre Meriden Green is an impressive piece of placemaking, including an amphitheater, trails, open lawns, the creek, and three acres of development sites that are outside the 100-acre flood plane. The green is made stronger by the urban architecture, some new, some historic, that surrounds the public space.

Meriden Green is a locus for new urban development all around, and 11 Crown Meriden, which occupies a full city block on the south side, may be the most prominent. It includes 81 living spaces—80 percent of them affordable—plus community and office space, may be the most prominent to date. The development is built by Michaels Development—a national firm—with the design a collaboration of Torti Gallas + Partners and Ken Boroson Architects.

The development features a four-story mixed-use building facing the green, and 18 townhouses that face residential streets. The traditional design fits in with the city’s historic buildings, and residents can walk to an Amtrak station with service to New Haven, Hartford, Boston, and New York City. The station, which faces the green, is also a hub for regional bus lines.

Redevelopment and the Green

Meriden earned the nickname “silver city” due to its silverware mills at the center of town. As this manufacturing was outsourced to places with cheaper labor in the early 1960s, Meriden took the route of cities across America—it tore down the classic mill buildings for redevelopment. For many decades, that decision didn’t work out so well. Then the City opted for green space as a redevelopment strategy, an approach that filled a long-standing need.

“The notion of a central City Green, a founding gesture in almost all Connecticut towns, was brought to Meriden three centuries later in 2016, as a way of flood control and bringing centralized amenity to the heart of Meriden,” reports Torti Gallas. The green has an organic shape that follows the irregular streets at the center of the city.

The four-story mixed-use building at 11 Crown Meriden was inspired by the architecture of the demolished mills. “The building feels appropriate because it is the exact scale and shape of the former buildings upon which the history of the town was built— echoing those historic assemblages—all of which are now gone,” the firm told CNU. Although the green is on land formerly occupied by mills, 11 Crown Meriden is on the site of an unattractive mid-20th Century newspaper plant—the printing had been relocated elsewhere.

A community center in the development provides social services to residents. When these services are no longer needed, the space is designed to be converted to retail or a coffee shop.

“This project, in itself, is a shining example of what we can do when we work together as a public private partnership,” Mayor Kevin Scarpati told the Record Journal newspaper.

The US Department of Housing and Urban Development (HUD) provided the initial funding through a Sustainable Communities grant and the EPA helped pay the cleanup costs. The Meriden Housing Authority provided 25 Section 8 vouchers for 20 years. Another 36 units are rented to households that meet moderate income requirements.

A number of mixed-use projects sprang from Meriden Green in the last six years, including the public parcels set aside for development. The first phase consisted of development at the corner of State Street and Mill Street, including 90 residential units, 20 percent of are affordable; 8,400 square feet of rentable retail space; and approximately 3,500 square feet of rentable restaurant space with an estimated cost of $24 million, the City reports.

Meriden Green is transforming the distressed downtown an of a historic city in positive ways, in marked contrast to previous efforts since 1960.