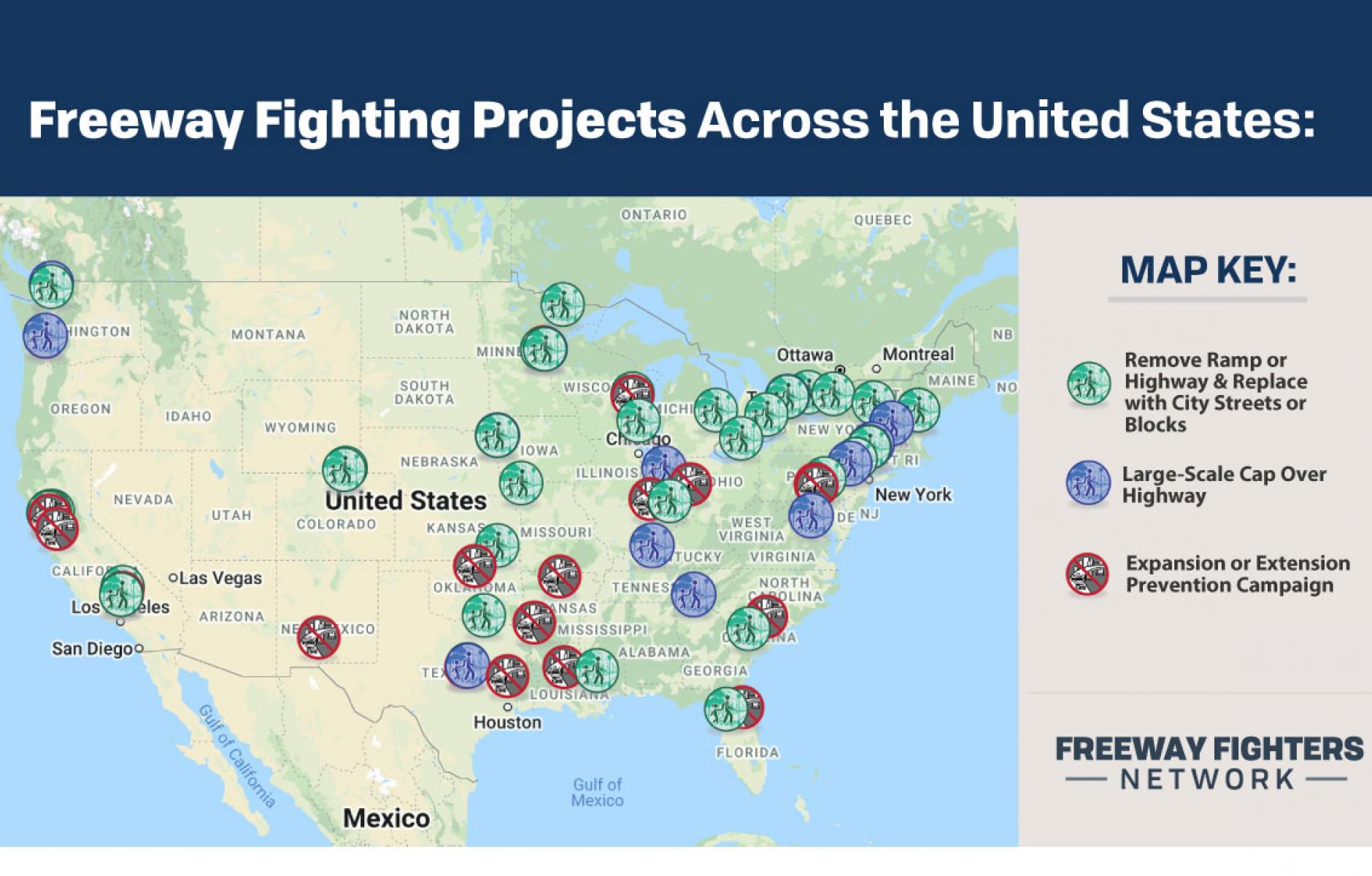 Early in the Interstate era, an initial cadre of freeway fighters contested the misleading narrative of progress so often associated with highway building, especially in cities. Citizen-led groups like the Movement Against Destruction, the Emergency Committee on the Transportation Crisis, and People Before Highways recognized the massive damage highways cause to communities, cities, and environments.

We are now entering the seventh decade of the American experiment in highway building and, like the original freeway fighters, we know it is not sustainable. This is why local campaigns from Houston to Minneapolis, Syracuse to Seattle, and in dozens of cities and towns in between, have joined forces to form the Freeway Fighters Network, a nationwide coalition to once again center people before highways in infrastructure investments.

The Freeway Fighters Network, supported by the Congress for the New Urbanism, tracks more than 60 local freeway fighting efforts across the country and coordinates collective action at the national level. In addition to fighting freeways in their own communities, network members advocate for a larger shift in transportation public policy to support the following principles:

Each of these principles embodies the community-based advocacy of network members. Examples of their efforts include:

These freeway fighters are but a handful of the groups that exist across the country who recognize that while their individual efforts may ultimately be successful, they will not stop highway builders elsewhere from inflicting harm on communities like theirs. The Freeway Fighters Network provides a venue for local campaigns to share information and mutually support each other. It's also a vehicle for action, as we tell local, state, and federal decision makers with a unified voice there are better alternatives to highway building.

Why now? We have reached a turning point. Many of our freeways are reaching the end of their lifespans—and their continuing purpose and worth is being called into question. Do we continue to invest in a transportation system that ravages the environment and causes social, economic, and physical harm to the people who live in its path? Or should we divest from polluting highways and build instead green infrastructure that integrates inclusive mobility and community development. We believe the latter.

The Freeway Fighters Network recognizes that the highways built during the 20th Century have created a system of car-dependency that is difficult to disentangle, but until this happens, it is impossible to meet the 21st Century climate and environmental challenges that threaten public health, economic vitality, and community stability.

Want to get involved? Join the Freeway Fighters Network here. Additional information on the Network can be found at freeway-fighters.org.