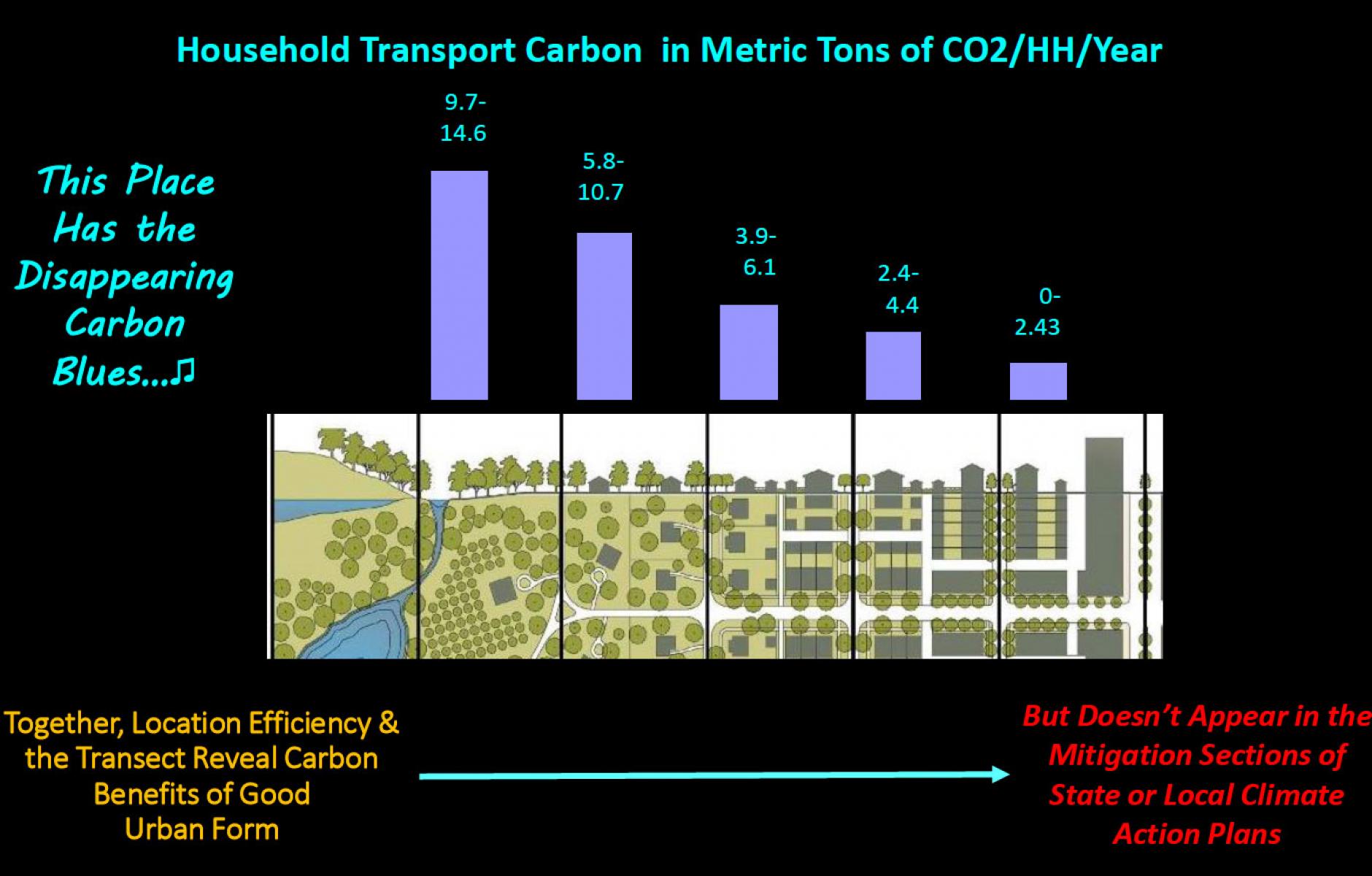 Source: Scott Bernstein
Got A Minute

Carbon emissions and the Transect

Transportation is a major source of household carbon emissions, and these emissions are reduced dramatically as Transect zones become more urban, as shown in this slide, presented by Scott Bernstein at CNU 30 in Oklahoma City in late March. I have seen similar correlations of traditional cities versus sprawling nations, but this slide relates to the scale of places that can be designed using the new urbanist idea of the Transect. It is remarkable in its clarity.

As settlement patterns become more compact, carbon emissions decline, largely because of “location efficiency” and transportation choices. The biggest drop is from Sub-Urban, which the third T-zone from the left, to General Urban, the third from right. General Urban neighborhoods are mostly residential, often with a mixture of "missing middle" and single-family residential types. General Urban should be walkable to a neighborhood center or Main Street area, represented by the next T-zone over. Dense downtowns are farthest to the right. The six-zone rural-to-urban Transect drawing was created by DPZ CoDESIGN.

In an email, Bernstein explained how he put the slide together:

We used a measure called the Compact Neighborhood Score which is composed of urban form variables (density, regional intensity, block sizes, fraction of housing in SFD) collected to construct the H+T Index, available for all 217,000 block groups in the US. This score is highly correlated with measured Vehicle Miles Traveled per Household per Year, which is used to calculate GHG emissions per Household per year. We examined regulating plans to identify ranges of allowable densities within T-zones to sort the distribution of ranges into what's displayed on the slide.

The Transect is a highly useful, influential concept, especially in the creation of form-based codes and land use plans that guide development. The Transect is all about putting urban elements together in a way that support one another, creating places that are compact, walkable, and livable. Transect-based planning and coding are powerful tools in addressing climate change. And yet, they are not widely known as such, as the slide states: The Transect “doesn't appear in the mitigation sections of state or local climate action plans.”

Note: Scott is from Chicago, and I believe the song lyric in the slide is a reference to legendary Chicago folk musician Steve Goodman's song, City of New Orleans, about a train from Chicago to New Orleans that has the “disappearing railroad blues.”