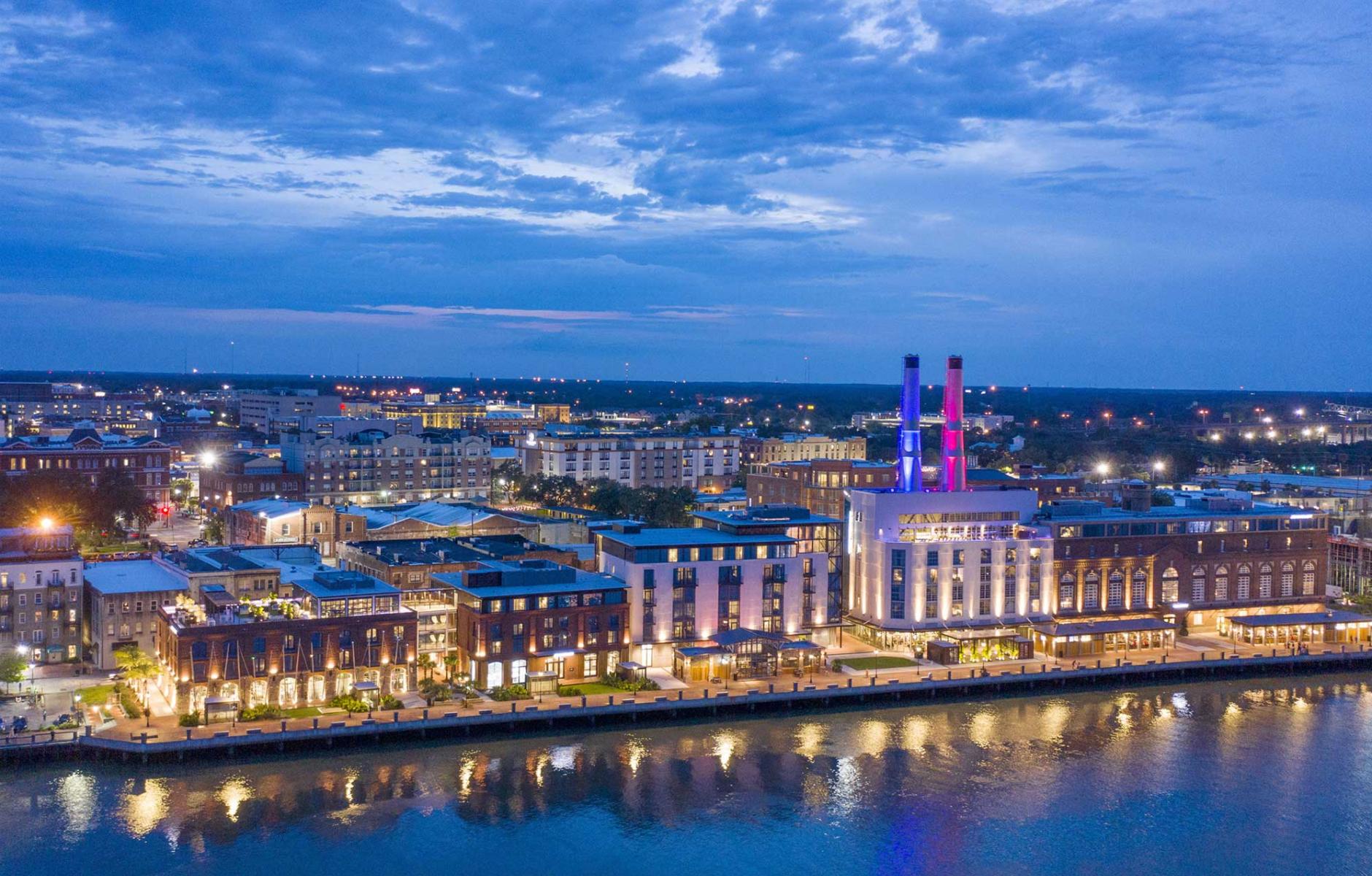 A little vision, a small site on the water, makes a huge asset

Even a small waterfront site can turn into a social and economic draw for a city or town.
ROBERT STEUTEVILLE   &nbspSEP. 28, 2021

Ever since, perhaps, our evolutionary predecessors made their way out of the marine environment onto land, people have been attracted to the water—socially, economically, and aesthetically.

Recent CNU Charter Award winners have been waterfront projects—especially the 2020 and 2021 Grand Prizes.

A hundred years ago, urban waterfronts were taken up largely by industrial and shipping uses—most, not all, of these are gone now. In the last 50 years or so, many of the urban waterfront sites become low-value parking lots and abandoned or isolated buildings—a gross underutilization of important sites.

Large-scale transformation isn’t necessary. Redevelopment of relatively small sites can make a big difference to a city.  The 4.5-acre Plant Riverside District in Savannah, Georgia—the 2021 Charter Grand Prize winner—is a great example. How could a new urban place stand out among Savannah’s wealth of timeless urban fabric? Yet such was the achievement on a relatively small, former brownfield site on the water, which has quickly become a cultural center and draw for the city.

Although the Plant Riverside District has a lot of mixed-use development—670,000 square feet—the site also includes 1.5 acres of public space. On the water, a small amount of public space goes a long way. The District was designed with a series of small public spaces strung out along the water, which is all open to the public. It has become an amazing spot for concerts, events, or just hanging out.

“This magnificent redo of a hundred-year-old power plant has become the beacon and icon to Savannah’s future,” says Joseph Martinelli, president of Visit Savannah.

A key to the urban design of Plant Riverside was to connect the waterfront through new and old buildings to the rest of the city. The three primary “ways through” all are public spaces—the greatest is located at the end of Martin Luther King Jr. Boulevard, which became the primary public space for gatherings and events, and where the city’s first statue of MLK was erected.

The string of squares and plazas along the waterfront path is animated by the architecture, including the historic power plant and 12 smaller, new buildings with mostly active first-floor uses. The high level of activity here, including the impressive exhibit space in the old generator hall, is the other pillar of urban design in Plant Riverside. The water, mixed-use buildings, and public space combine to create a new draw that can complete with Savannah’s magnificent historic squares. With such a wealth of older civic assets, you wouldn’t think that Savannah would need a new waterfront development—but it does.

Hammetts Wharf is located in a similarly historic city, Newport, Rhode Island—nearly a century older than Savannah. Since Newport has an impressively preserved maritime history, you wouldn’t think that development of a one-acre waterfront parcel would make much of a contribution—but it does. Hammetts Wharf sprung up on a much less impressive site than the Plant Riverside District, which had old industrial structures. Hammetts Wharf was simply a surface parking lot, which goes to show what can be done with a humble waterfront lot.

A 24,000 square foot mixed-use building was built on the site, including retail/restaurant space, with a public plaza. The building itself shows how architecture can connect people to the water. Few people wanted to walk through parked cars and asphalt to get to the water. The new building creates a portal to the water that is magical.

In this case, the portal is literal—an archway that leads to a public space with a view and comfortable seating. The building architecture, which reflects Newport’s heritage, is also a huge trade up from the parking lot.

Hammetts Wharf shows how design for climate change may enhance a site on the ocean. The building was raised up, creating protection from the prospect of rising sea level. This was done in a way to create an elevated public space with a view, stepping down to the water. The sea level space is a parking garage, which is not subject to much damage from a storm. It is hopeful that smart waterfront development can help to protect a city from more frequent storms in coming decades.

Both developments featured here are located in places with great existing urbanism, but neither depends on that. The Newport project was built on a surface parking lot—and any run-of-the-mill city, town, or suburb has plenty of that. The Savannah site was an eyesore surrounded by chain link fence. “Rust Belt” cities are awash in such sites. They are often taken for granted. But even a small waterfront site can turn into a social and economic draw for a city or town.