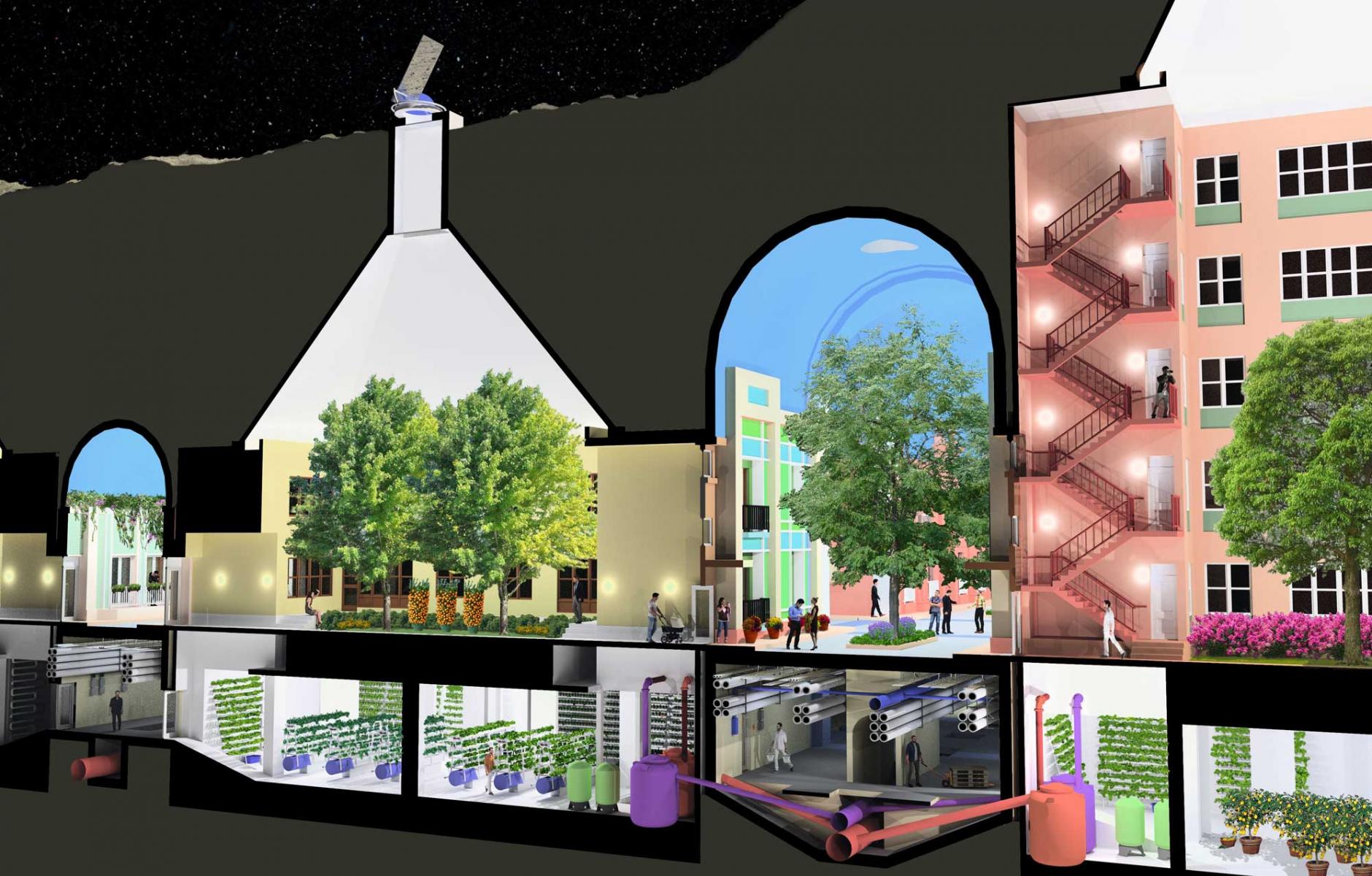 Even on the Moon and underground, streets must be more than a corridor. The relationship of private dwelling to public space is inherent to the human ecosystem—from private (dwelling), to semi-private (courtyard), to public streets and spaces. By Joe Kohl
Design

New Urbanism on the Moon

The architecture of community will be important in space, because you not only have to keep people alive, but happy and healthy—and you do that through sense of community.
ROBERT STEUTEVILLE   &nbspSEP. 20, 2021

Hilton Hotels famously planned a hotel on the Moon back in the 1960s, when outer space fever was at a high pitch. These plans were obviously never realized and nobody has gone back to the Moon since 1972, but now space ambitions have surged again, and there has even been talk of space settlements. As NASA recently reported, “Once the exclusive province of science fiction stories and films, the subject of space colonization has rapidly moved several steps closer to becoming a reality thanks to major advances in rocket propulsion and design, astronautics and astrophysics, robotics and medicine.”

That raises multiple questions, such as: What would a space settlement look like? And, pertinent to Public Square readers, could urbanism be built on the Moon and beyond?

One new urbanist designer, Joe Kohl, has long been fascinated with the stories and science of space travel. He drew up plans for a complete community on the Moon, and he calls it Seleneca, after the Greek Goddess Selene, the mythological embodiment of the Moon.

“I’ve been thinking about this my entire life,” says Kohl, a founding partner of Dover, Kohl & Partners. “I was six or seven when Neil walked on the Moon. They said ‘you are going to get to go to the Moon some day,’ and I believed it. I think that's why you've got these billionaires who are creating their own space race. They were told the same thing, and disappointed nothing happened so far.”

Seleneca is a plan for a hundred years out. As a native Virginian, Kohl notes that it took English settlers nearly a century before Williamsburg was designed and built after the first settlement in Jamestown. Seleneca is Williamsburg for the Moon, but bigger. It is a city designed for the human scale, taking into account the limits and harshness of the Moon. Although Kohl started the Seleneca project eight or nine years ago, much of the work was done in 2020. It was a coronavirus project.

Seleneca employs new urban principles, that is to say humanistic urban design—the architecture of community. It is by necessity compact and walkable. The city is intended for a population of 8,000-10,000, all living within a 5-minute walk of the center. The shape is 12-sided—essentially round, but allowing for some regular block shapes. The shape facilitates air circulation. At the center is a park and much of the mixed-use. Outside of the city are farming and aquaculture areas and space docks, which function like airport terminals (opening and closing doors would be a no-no).

The architecture has a Byzantine quality that comes from the vaults and the courtyards, which serve practical purposes. And they relate psychologically to forms that are associated with Earth. There is no internal transportation system, because nothing is further than a 10-minute walk. Within the farms, just outside the city, small electric carts and shuttles would help people get around.

“The design for Seleneca is based on what both scientists and urbanists currently know, not fiction,” says Kohl. “With this new space race getting started by billionaires and multiple national governments who are focused on the mechanics of liftoff and sustaining life, CNU’s principles will still be relevant when those folks succeed.”

What distinguishes Seleneca from other designs is not just the block-and-street network, but the construction details. For one, Seleneca is nearly all underground to shield life from harmful solar and cosmic radiation. Visions of buildings on the surface of the Moon are probably unrealistic, Kohl says. The temperature extremes, also, would wreak havoc on material that are directly exposed to the changes. If building underground is a necessity, then how do you do that without making the place feel like a bunker? Changing ceilings, courtyard housing, are design ideas aimed at mitigating that problem.

There will be little or no steel and wood for construction, he says. The chief material is regolith, or lunar soil, which will be used to make concrete. The city would be covered by four meters (13 feet) of regolith to block out radiation. One advantage is the lunar gravity, 17 percent of that on Earth, which means less structural weight to be supported.

The masonry construction leads to classic forms such as the barrel vault, the arch, domes, and cupulas. These shapes bounce light around a room—sunlight, available half of the month, would come down through skylights.

The architecture and the urban design go beyond the functional, because life is more than functional. The challenges of living on the Moon would include making life comfortable and interesting, and enhancing community and social connections, to maintain mental health and well-being. This is literally a matter of life and death, because cooperation is key to survival. Seleneca would have to be mass-produced, but variation and creativity in the built environment are essential.

Variety is accomplished in two ways: First, by establishing multiple types of built form that varies in height and volume. Second, the system would allow for uniquely designed facades for each building by connecting construction shells to street shells.

Kohl describes the system and its benefits:

The heart of the city is a park under a dome, surrounded by offices and hotels and the businesses that serve them. Nearby is an intimate place for retail inspired by the covered shopping streets of Istanbul. The four cardinal streets are the corridors that form the edges of four wards. These wider streets with taller buildings offer neighborhood retail, food, and entertainment.

Inside the wards are quiet residential streets. Each ward has a central civic building with community meeting rooms, workspaces, emergency shelter, and recreation/exercise facilities. Every residence opens to a courtyard, mostly shared, but some are private, for individual landscaping. A few of the farms keep vistas open for those craving long views without being in a space suit outside.

The two municipal buildings anchor the view inside Central Park, orienting people north. These civic buildings have large terraces at multiple levels for gathering to enjoy different views. Towers may be climbed for higher views, plus the cupola above the dome is accessible for long views of the lunar landscape surrounding Seleneca.

The city is anticipated to be the core of a large network of facilities, run by private research and industrial corporations. It would serve the outlying facilities by providing a democracy, a judicial system, a hospital, essential utilities, food production, and civic and cultural activities.

A location is chosen at the 62ond parallel of the Moon, to minimize daytime highs (116 F, as opposed to 260 F near the equator.) And there are water resources at the North Pole. The Earth will always be low in the sky at Seleneca, making for great photos. And that will also help with orientation on the surface.

Kohl notes that any new settlement requires living off the land, using local resources, and that means concrete for Seleneca. There would probably be titanium and aluminum available, but in much smaller quantities. Eventually, asteroid mining may provide more metals, but that is a long way off. Seleneca could not be powered by solar power alone, but Kohl anticipates nuclear fusion (not the dangerous fission) will be available as a safe power source that can be scaled down for local grids.

New Urbanism addresses the relationships of public space to semi-public and private space, and how people connect to buildings and the public realm. Those fundamental principles are not talked about in outer space discourse, Kohl says.

Most of the discussions come from a military mindset, he says—i.e., how do you keep somebody alive? “I'm saying you not only have to keep people alive, but happy and healthy, and you do that through sense of community.”

He explains: “Science is saying that it is possible to live on the Moon, and I contribute some ideas of how to do that and not live in a Pepsi can. Seleneca brings community into the discussion.”