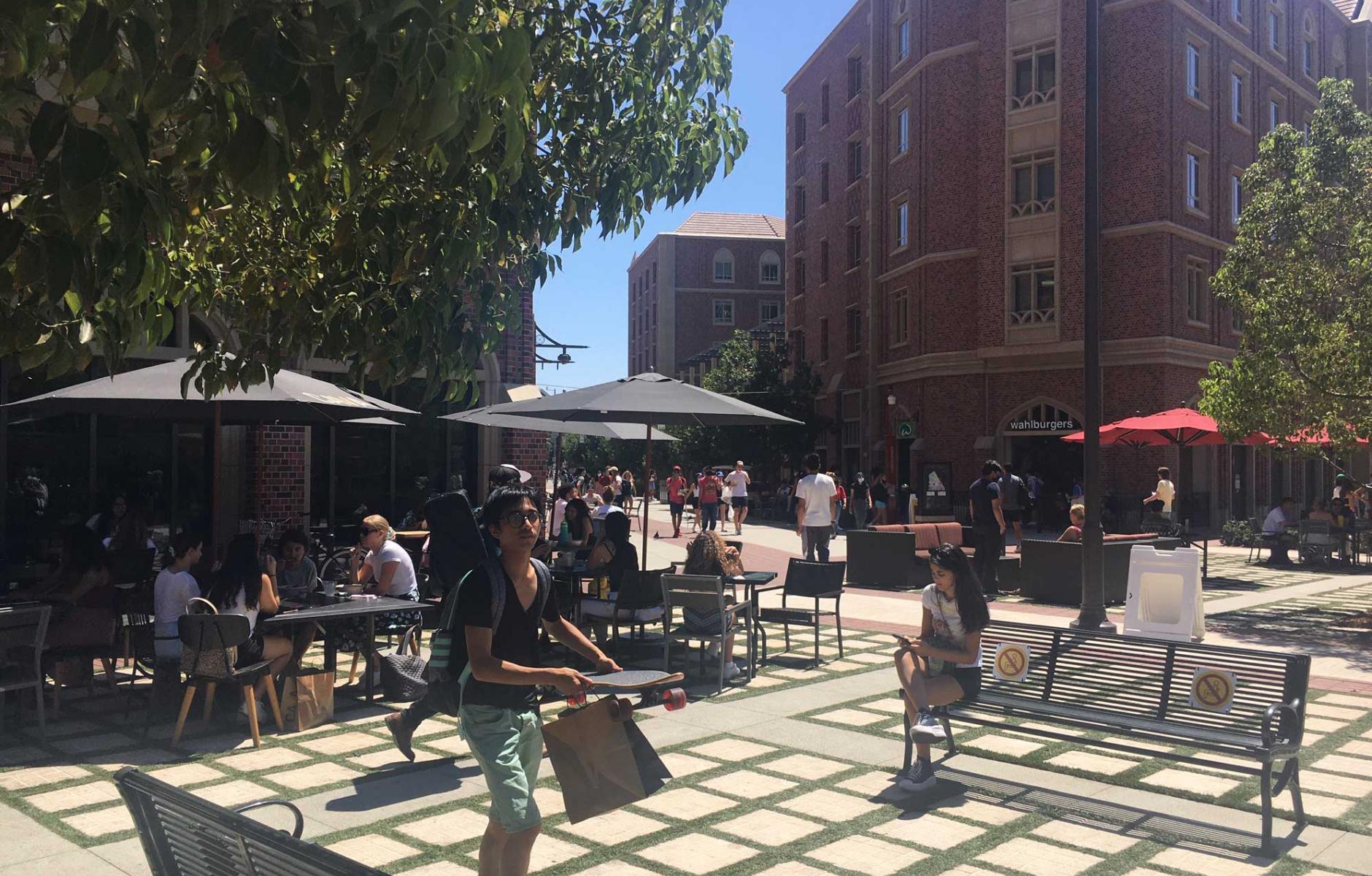 USC Village: Young man with musical instrument on back, skateboard, and shopping bag in the foreground, and scores of people sitting and walking. Photo by Robert Steuteville.
Public space

A ton of people and a well-designed public realm combine in the alchemy of a happy place in LA.
ROBERT STEUTEVILLE   &nbspSEP. 10, 2021

I was recently in southern California, for an in-person meeting of CNU staff (the first since the pandemic began), with our new executive director, Rick Cole, a long-time resident, former mayor, and city manager of Pasadena. I took Metro rail most of the way from Pasadena to LAX, but got off on an impulse when I saw a stop marked “USC Village” on the train.

I was not in a hurry to catch a plane, and I am a sucker for visiting new urban projects. USC Village is a mixed-use town center adjacent to the University of Southern California. It was a hot Friday afternoon in August, not the sort of day that one would expect to see large crowds of pedestrians. Given that the village was part of the station name, I expected to get right off and see it. I wandered around in the blazing sun for a block or two before punching it into my iPhone and realized USC Village is located a half mile from the station—surprising to see a new urban project not even that close to Metro highlighted on public transit.

I walked to the development and I was not disappointed. Listed as a “shopping mall” on my phone, USC Village is much more. The 15-acre, $700 million development includes housing for 2,500 students, the first sizable grocery store built in South LA since the 1960s (Trader Joe’s), a Target, other shops and restaurants, and a really fine public space. Most of it was completed in 2017.

The community scale architecture—the urban design—can be judged by the impressively high pedestrian activity and socializing that I found, which was amazing given that I visited in the middle of a weekday. USC Village has become the outdoor living room for USC’s more than 40,000 students.

The architecture, by Harley Ellis Devereaux, can be described as neo-Gothic, inspired by what I gather is the pre-dominant campus style. The building design is all in the same style—for better or worse, there was no attempt to hide that this was a single architectural project. The phrase “faux-neo-Gothic” popped into my head at one point, and yet that may be selling it short because the buildings look solid, with substantial depth to the masonry windows and details. The bottom line is that USC Village made me happy. The acid test for urbanism is how people react to it and use it.

There were hundreds of people, most obviously students, wandering around, sitting, talking, and just hanging out in the public spaces. Many were not going anywhere, and others did not appear to be in a hurry. I have rarely seen this much routine street life in a new urban project. I can only imagine what this place would look like on a Friday or Saturday evening, or when some event is taking place.

I am familiar with the built environment in and around universities. I have lived in a college town for 24 years with two large institutions and, of course, went to college back in the day. Ithaca, New York, where I live, has some great public spaces but nothing adjacent to the institutions that looks as fun as USC Village, nor containing retail as useful as Target or Trader Joe’s.

In my brief visit I attribute a few factors contributing to the lively public spaces:

Here are random snapshots on my old iPhone, which doesn’t even have a very good camera. The place looks effortlessly full of life. Kudos to Harley Ellis Devereaux, which has designed a landmark in South LA.