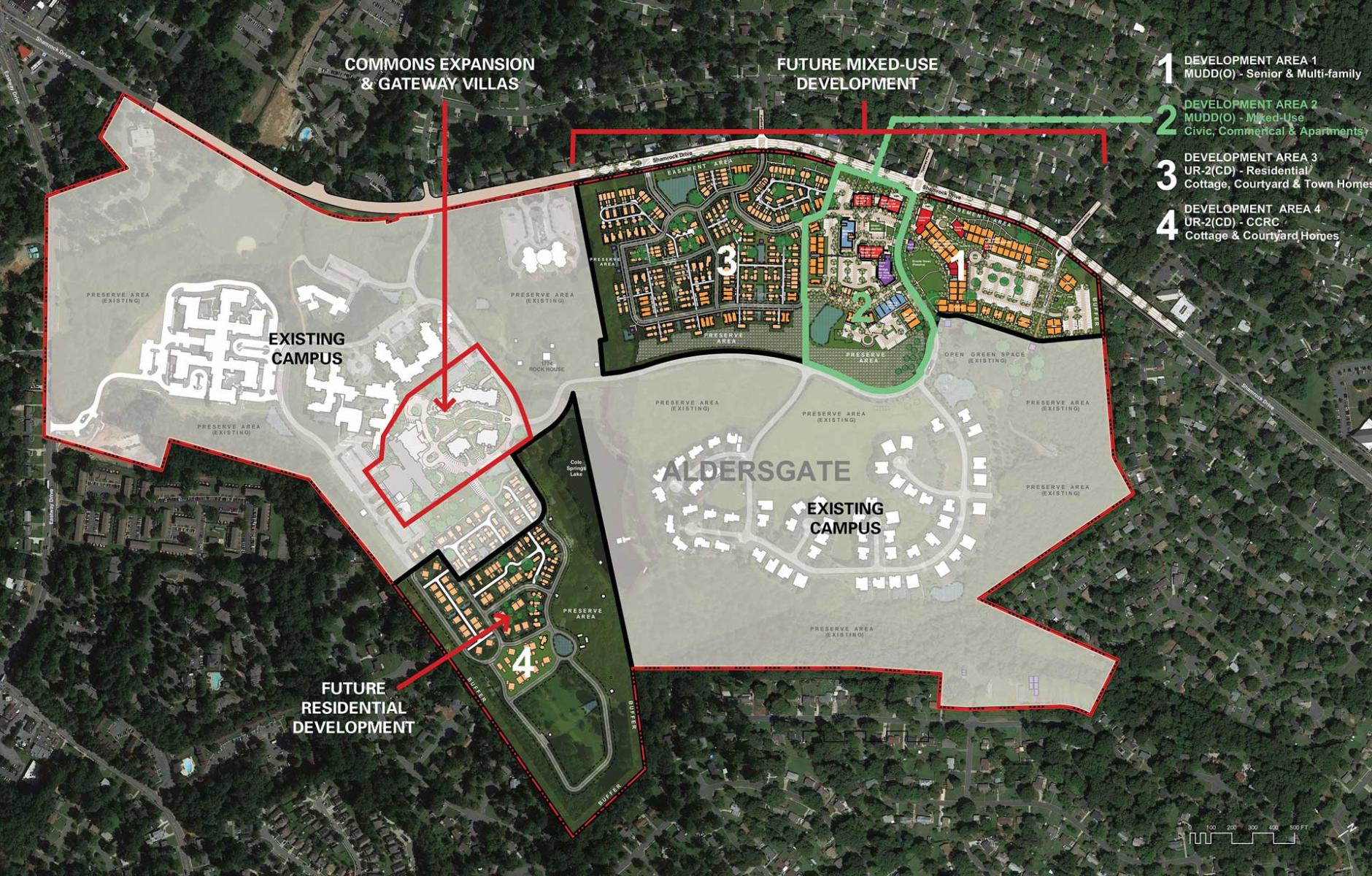 Planning for retrofit of retirement communities

Continuing care retirement communities are a huge industry, planned in the suburban model, often with excess land that could be better utilized in a walkable, mixed-use form.
ROBERT STEUTEVILLE   &nbspAUG. 24, 2021

The 231-acre Aldersgate campus in Charlotte, North Carolina, is one of 1,900 continuing care retirement communities (CCRCs) in the US. Like most CCRCs, Aldersgate is set back from the surrounding city, planned in the single-use suburban model.

More than 70 years after the development broke ground as the Methodist Home in what was then a newly suburban area of the city 4.5 miles from downtown, the surrounding neighborhood has become a diverse place known for its ethnic restaurants. Aldersgate has a new plan that could serve as a model for other CCRCs around the US.

Redesigning CCRC land along the lines of a mixed-use neighborhood could have health and wellness benefits for aging residents, encouraging them to walk and connect to the surrounding community.

On 44 acres of Aldersgate land will arise a new phase of the project—development consisting of affordable housing, single family and townhomes—a mix of family, age-restricted and age-targeted ‘diverse price-point’ housing, with retail and community gathering places.

“The new development will be positioned as the public face of Aldersgate—targeted at making physical and cultural connections to the existing and culturally diverse surrounding neighborhoods,” according to the design team at Shook Kelley, a design and real estate strategy firm based in Charlotte and Los Angeles.

The plan is to build a new walkable neighborhood with a small, urban center—including public spaces—that will incorporate diverse elements of the surrounding neighborhood, such as ethnic cuisine. This could benefit the surrounding neighborhood, but also provide a new business model for Aldersgate that will position the community better with Baby Boomers, the target market in the next two decades. Like many CCRCs, Aldersgate is a nonprofit institution with church roots.

“Our entire team is stretching the boundaries out of the familiar and into what is proven by unique project research, providing an uncompromised common long-term vision,” notes Suzanne Pugh, President & Chief Executive Officer, Aldersgate Life Plan Services.

The new traditional neighborhood development (TND) will have three sections with “housing for just about everybody,” says Terry Shook of Shook Kelley.

The central section is a village center with 20,000 square feet of retail, a 24-hour medical clinic, market rate multifamily, and a pre-K and kindergarten school that exists in the neighborhood, and would move to the village center.

Just to the east of the village center is a section that includes tax credit affordable housing for both the elderly and non-age-restricted groups, targeted at making it affordable for employees—such as cooks, maintenance, and wait staff—to live there. It would also include market-rate rental units for the elderly.

Residents will be able to contract with Aldersgate “on an ala carte basis” for many kinds of services, saving money along the way. Many Boomers also don’t want to admit that they are getting old and going to die, Shook notes. They may pay for one service at a time, he explains.

Just to the west of the village center is the third section, which will include housing that is not age-restricted, open to everybody, Shook says. Some of these will be family cottages grouped around courtyard greens that allow people to age in place.

The new village center will provide a venue for the programming of Aldersgate, which has events all year long that the surrounding community is invited to. The development will provide public spaces to maintain and enhance the ritual of coming to festivals. The spaces include a large green with lawn, and a smaller public space at the heart of a Lake Forest model retail center.

“It is in the self-interest of Aldersgate to have the retail at their front door,” Shook says. “They will provide the land. The village center may aggregate ethnic restaurants and amenities at the front door so people will come to them. People are already coming to the neighborhood, this will bring them to Aldersgate. Let social media do the work for you.”

There is one more aspect to the plan that is worth mentioning. The existing development will still be set back from the new mixed-use, but it, too, will be given a new gateway area with a public space.

The model that Aldersgate is planning “could extend to churches, and other institutions in the suburbs, that have excess land,” says Shook. A church in Montgomery, Alabama, has already created a plan using similar traditional neighborhood development ideas.