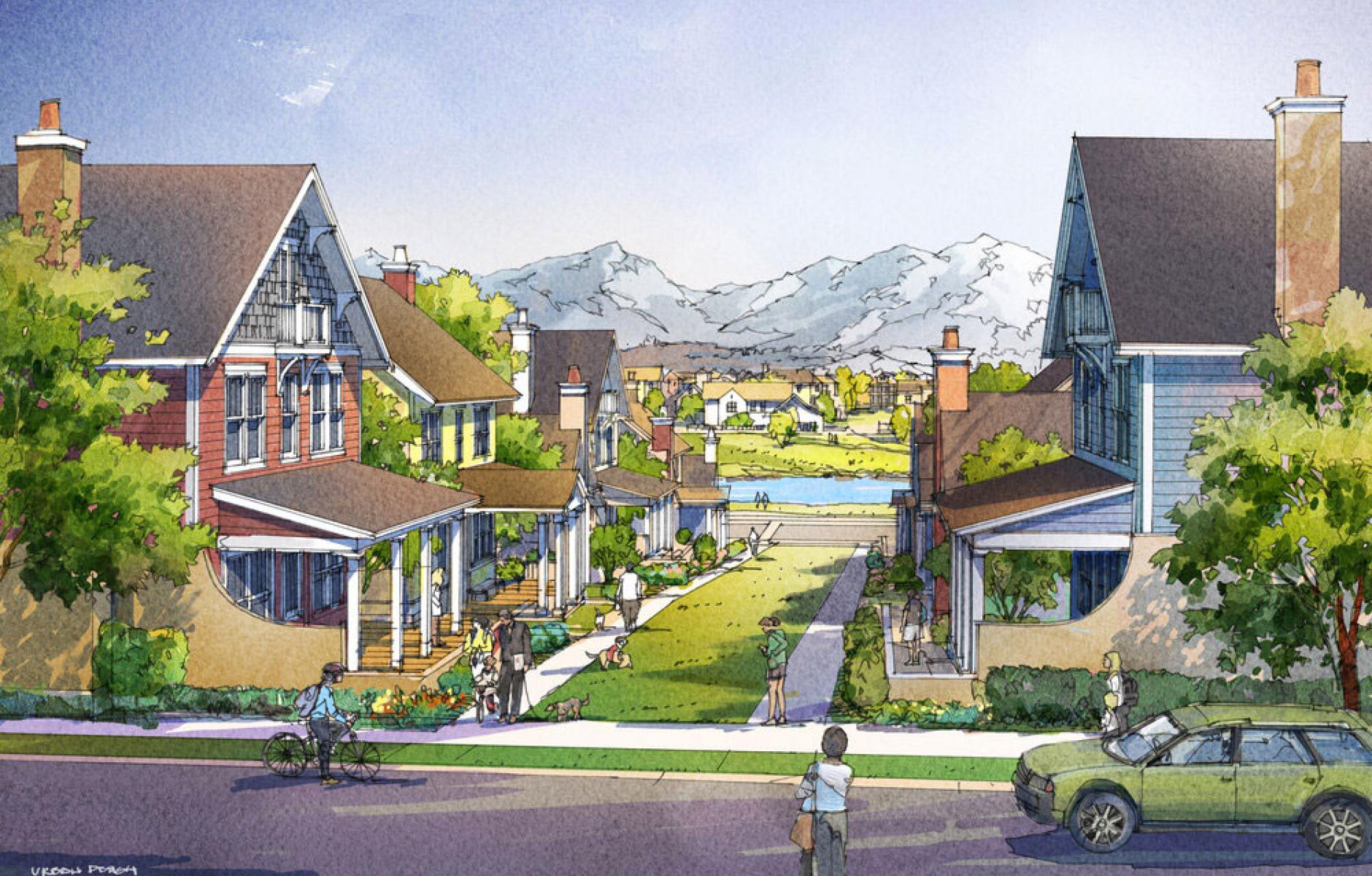 A recent report by Brookings sums up the challenge for US climate goals: It can’t be done without moving much more decisively to compact, mixed-use, walkable development. To quote from their report:

“Simply put, the United States cannot reach its GHG reduction targets if our urban areas continue to grow as they have in the past. After decades of sprawl, the US has the dubious honor of being a world leader in both building-related energy consumption and vehicle miles traveled per capita. Making matters worse, lower-density development also pollutes our water and requires higher relative emissions during the initial construction.

“That leaves the country with no choice: We must prioritize development in the kinds of neighborhoods that permanently reduce total driving and consume less energy. Such human-centered neighborhoods have the added benefit of helping us adapt to climate impacts, improve public health, and promote access to activities. Encouraging their development should be a central part of any national climate resilience strategy.”

This situation has important implications for the New Urbanism, because practitioners will be called on to help cities and towns adapt. While Brookings writes from a broad perspective, the change calls for new design approaches for buildings, neighborhoods, and regions—the three scales of the Charter of the New Urbanism.

Reports from CNU 29.Design for Change, the annual Congress being held virtually this week, raise confidence that the task is doable. It will have to be accomplished at scale, including policy changes and hands-on design with developers and builders. Changes in policy include code reform at the state and citywide levels—allowing multiplexes on current single-family lots, reforming parking, and adopting form-based codes—which is one outcome of California’s SB 35.

SB 35 is a law that requires municipalities to meet targets for specific kinds of housing production annually. If they don’t, streamlined entitlements kick in until the city can meet the targets. In practice, SB 35 has encouraged municipalities statewide to move toward form-based codes and guidelines, according to the panelists Patrick Siegman, Lisa Wise, Annie Fryman, and Stefan Pellegrini in a session Scaling up the New Urbanism: Using state laws to improve local codes.

Policy changes need to produce walkable communities on the ground, such as Daybreak in South Jordan, Utah, featured in another session TND principles in the fast-paced housing market. A walkable, transit-oriented development on a former brownfield site, Daybreak is the fastest-selling community in the fastest-growing state. With 1,055 units sold in 2020, Daybreak shattered sales records in Utah and was one of the best-selling new communities in the US, according to Eric Osth and Ashleigh Walton of Urban Design Associates, Katie McDermott of Daybreak Communities, and Corrine Green of Destination Homes. Daybreak began with a state-wide planning effort, Envision Utah, that set the foundation for sustainable development.

Success is linked to training home builders to build walkable communities. The new town is built entirely by production builders. While quality at this scale may be difficult, Osth points out that builders created many great walkable neighborhoods throughout history.

Training builders starts with an overall plan for a walkable community. The build-out is accomplished incrementally—over decades, in the case of Daybreak—addressing the block structure, the building types, and the details of each building. More than a thousand homes in 2020 required 4,000 reviews by a team of three designers, and the plans are aligned to a pattern book by UDA. All along the way, the builders are learning. This project includes a wide range of market segments, some of which are geared to affordability.

CNU provides answers for how builders may transition from automobile-oriented development to traditional neighborhoods, Osth notes. Daybreak shows how retraining the building industry is possible—but the process is much easier with talented designers. Many new urbanist firms have been involved in the building design of Daybreak.

A project of this scale—more than 20,000 units and 9 million square feet of commercial—is segmented into smaller “villages,” which blend together through a system of interconnected blocks and streets. Each village has its own building types, lot platting, architecture, colors, and other details. This allows for Daybreak builders and designers to constantly learn and adjust to the market.

Partly as a result of the pandemic, and related materials and labor costs, Daybreak is moving to higher-density building types. The challenge is to make sure that there is no compromise on the design, Green says.